Where to Eat in Bay Ridge, One of Brooklyn’s Most Dynamic Dining Neighborhoods

Where to Eat in Fort Greene and Clinton Hill Right Now

There's no better brunch than dim sum. There you sit on a lazy Saturday or Sunday around noon, surrounded by Chinese families at humongous round tables as carts glide by. Propelled by uniformed attendants, each cart pauses at your table, as lids are doffed to reveal the most delicious morsels imaginable. Your gateway drug may be a steamer full of har gow, each knurled dumpling bulging with a single outsize shrimp, the flavor delicately hinting of seashores far away; or a plate of rice-noodle sheets stuffed with minced beef and cilantro, over which a thick soy sauce is squirted dramatically at the last minute.

Now, you may be eager to take a walk on the wilder side with a shiny tub of braised chicken feet, a bowl of tripe delicately scented with orange rind, or even a wobbly saucer of stinky durian Jell-O. After an hour or so of kibitzing and nibbling, washed down with several pots of green tea, you feel pleasantly full. And the tab comes to $10 or so per person or less. It's something of a modern culinary miracle that food this fresh costs so little.

As recently as 10 years ago the dim sum scene in the city's five Chinatowns was moribund. But in the last few years it's undergone a resurgence, so that we now have the best collection of dim sum joints the city has ever seen. Leading this renaissance is Sunset Park, where four giant banquet halls host dim sum devotees from 8 or 9 a.m. in the morning, till the carts tail off gradually around 1:30 p.m. or so. The earlier you go, the fresher the output will be, though noon is plenty early for most of us. So step up to the podium and get your number – you'll be surprised how short the wait is, in spite of the apparent anarchy at the entranceway. 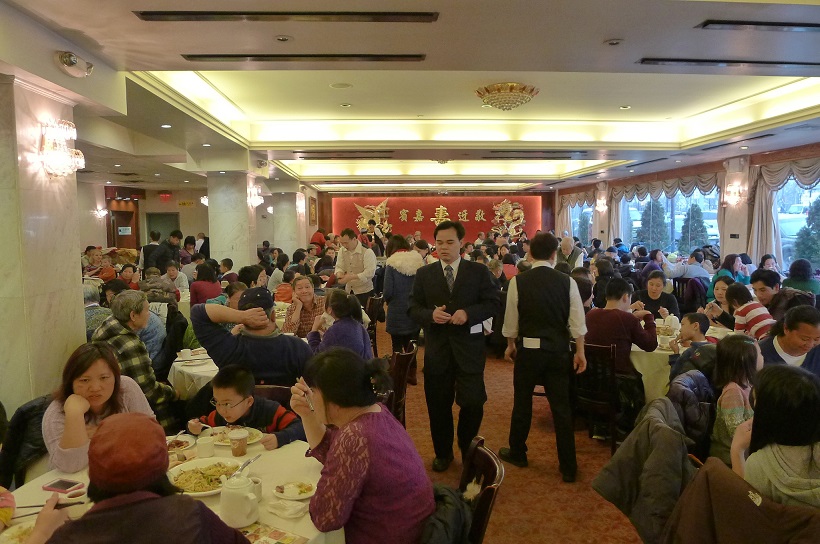 Bamboo Garden (6409 8th Ave, Brooklyn, 718-238-1122) — This is the very newest of Sunset Park's dim sum dining halls, with a décor similar to the other three, featuring a giant dragon and a giant phoenix, hanging chandeliers, and a touch of luxury in the napery and furnishings. Like the other places, it strives to present novel and even newly invented forms of dim sum. 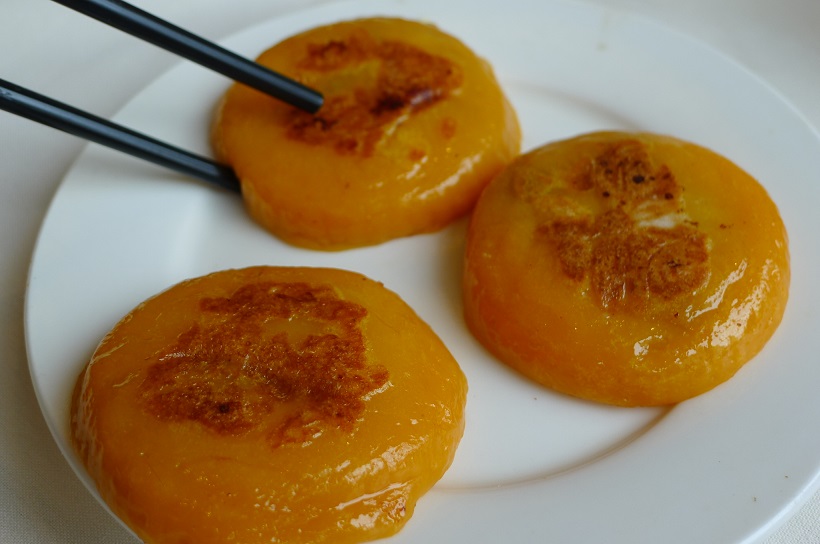 [Sweet potato dumplings]
Recently encountered were orange pillows of gooey sweet-potato starch stuffed with black beans, which originated in Sichuan according to a Twitter respondent; a saucer of braised chicken and black mushrooms on a bed of pumpkin; and a pair of giant dumplings stuffed with pork, shrimp, and vegetables delivered in a thick broth rife with yellow leeks. 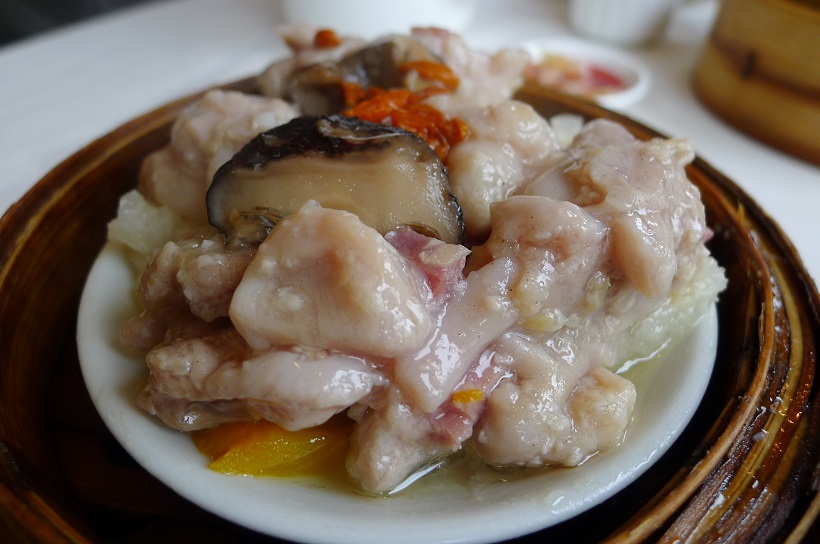 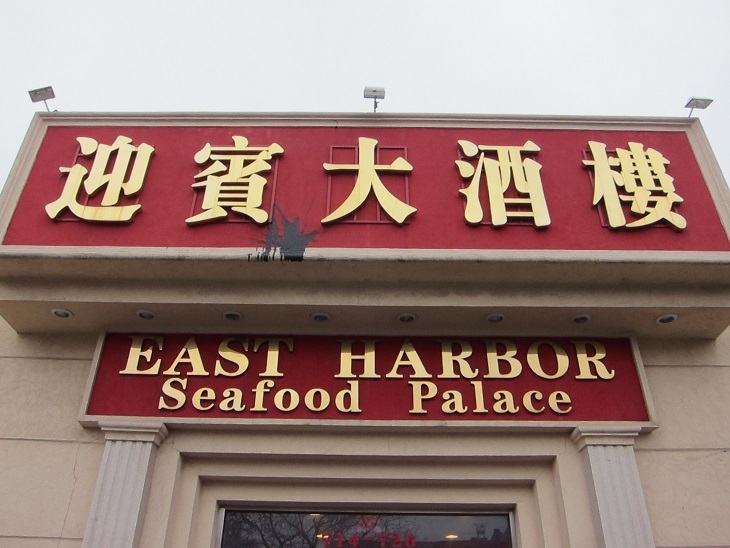 East Harbor Seafood Palace (714 65th St, Brooklyn, 718-765-0098) — This sprawling banquet facility sparked the resurgence of dim sum in Sunset Park when it debuted in 2009, and also extended the boundary of Sunset Park's Chinatown — which is more upscale and relaxed than Manhattan's — about five blocks south. 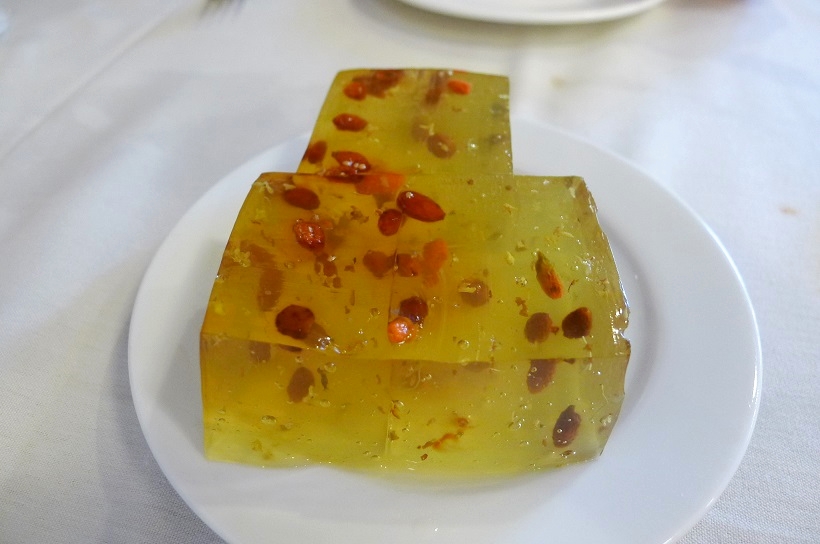 Though it once lagged in innovation, East Harbor is now working hard to keep up, with such offerings as jujube-dotted green-tea Jell-O, open-ended rice rolls stuffed with fish paste and Chinese celery, and scallion-flecked fish balls of uncommon subtlety. 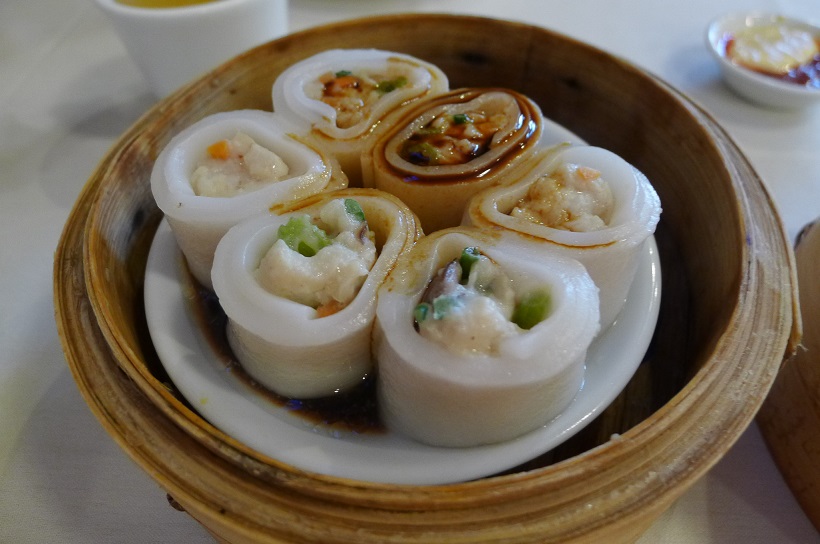 This is the neighborhood's most popular (and largest) dim sum spot. 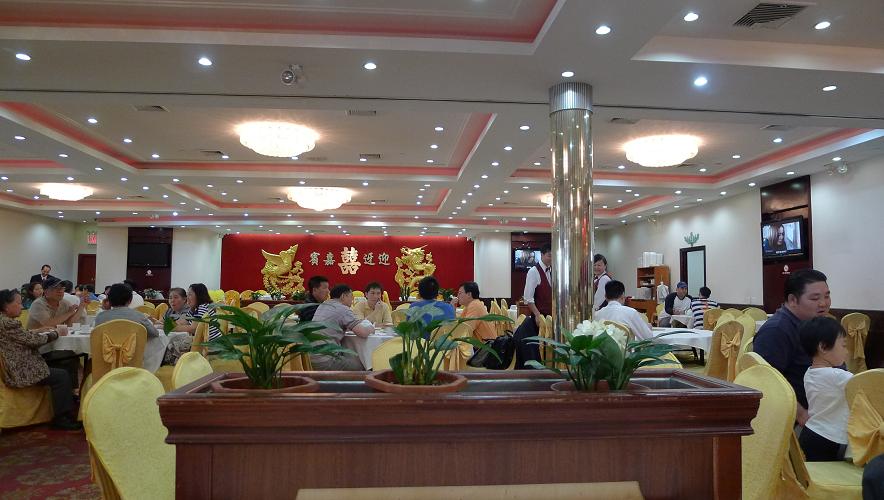 New Spring Garden (912 65th Street, Brooklyn, 718-680-2278) — Two years ago this place moved in among the auto body shops and medical facilities of Sunset Park's southern frontier, standing in opposition to East Harbor like two bookends on this burgeoning commercial strip. 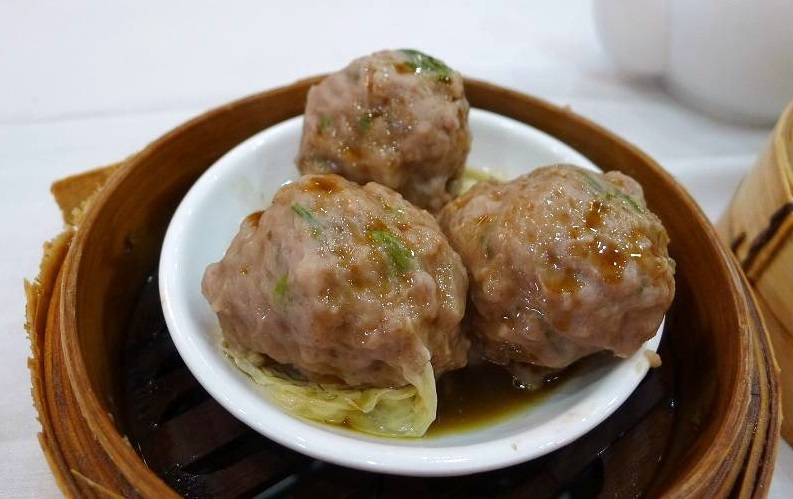 [Lion's head meatballs]
The dim sum carts appear more frequently and move faster, laden with what was, before the advent of Bamboo Garden, the freshest and most innovative dim sum. 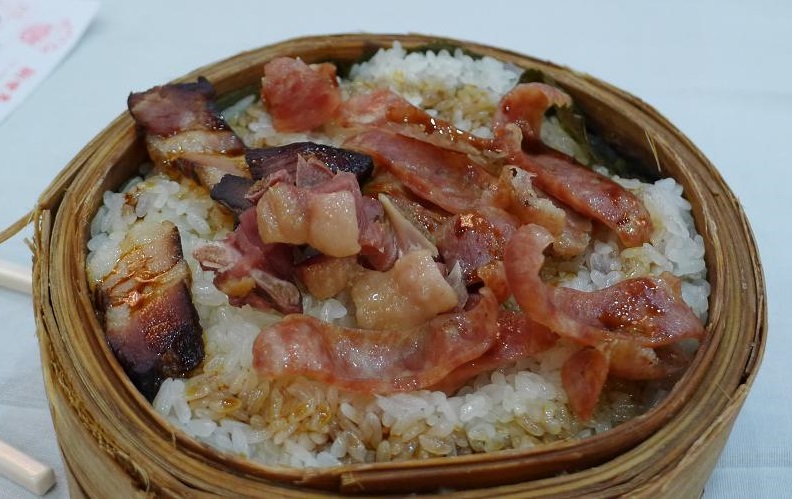 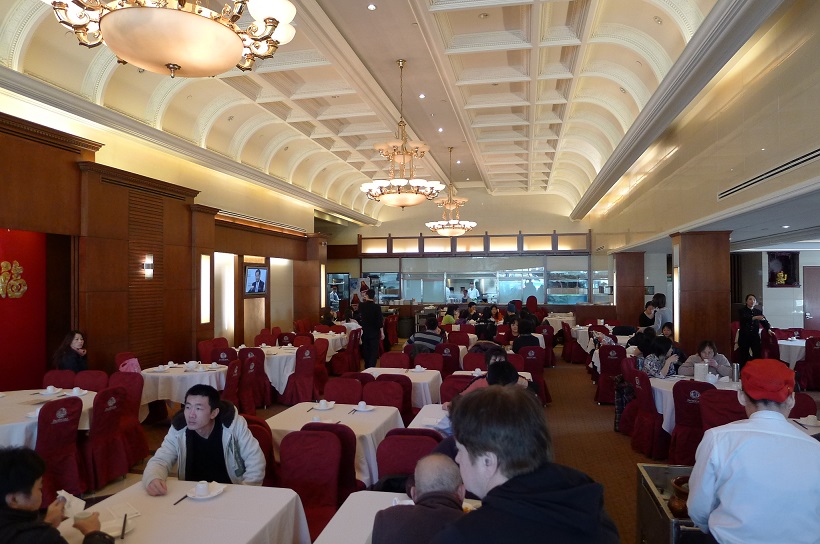 Pacificana (813 55th St, Brooklyn, 718-871-2880) — Open since 2004, Pacificana was a pioneer for dim sum and upscale Cantonese in Sunset Park, and a revamp has left it a shade more elegant than the other three places, with prices slightly elevated, too. 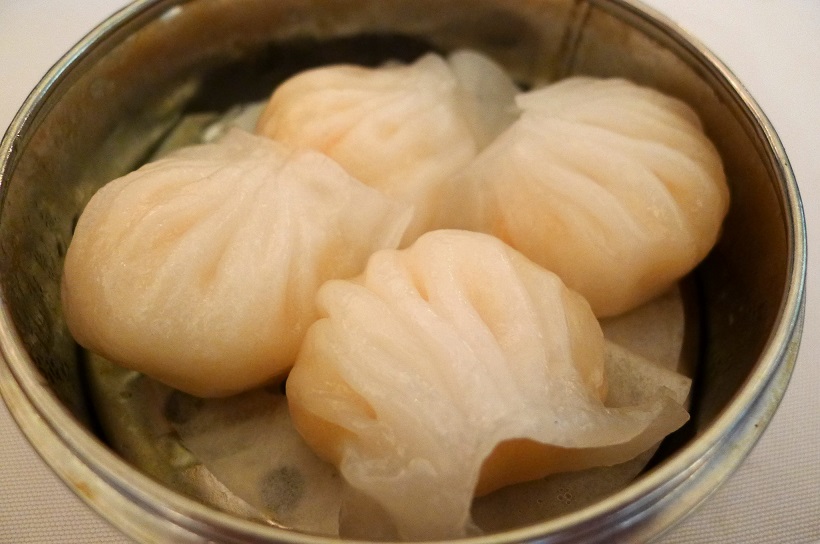 [Har gow]
That said, the dim sum is currently magnificent, as a retry last week demonstrated. 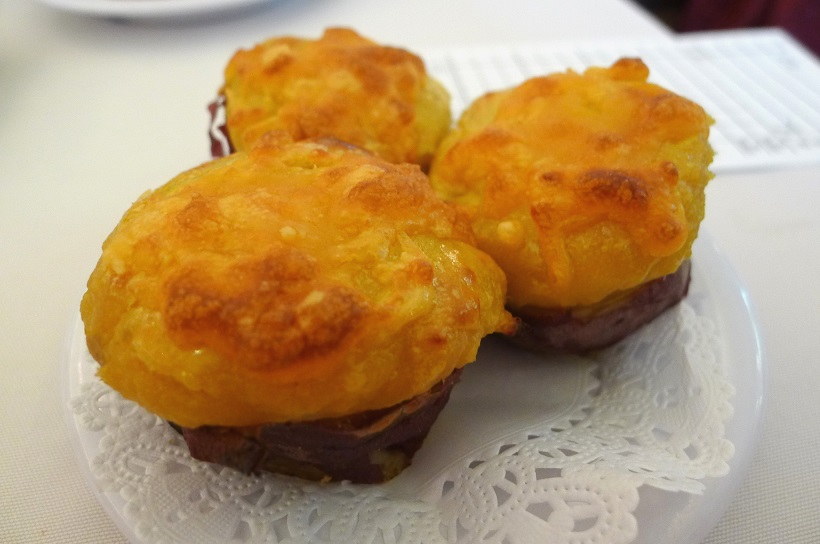 [Stuffed eggplant]
Rolling by were some of the plumpest shrimp har gow on the planet, novel eggplant sections stuffed with cheese-flavored orange yam, and plates of suckling pig with crisp skin planked across the top. 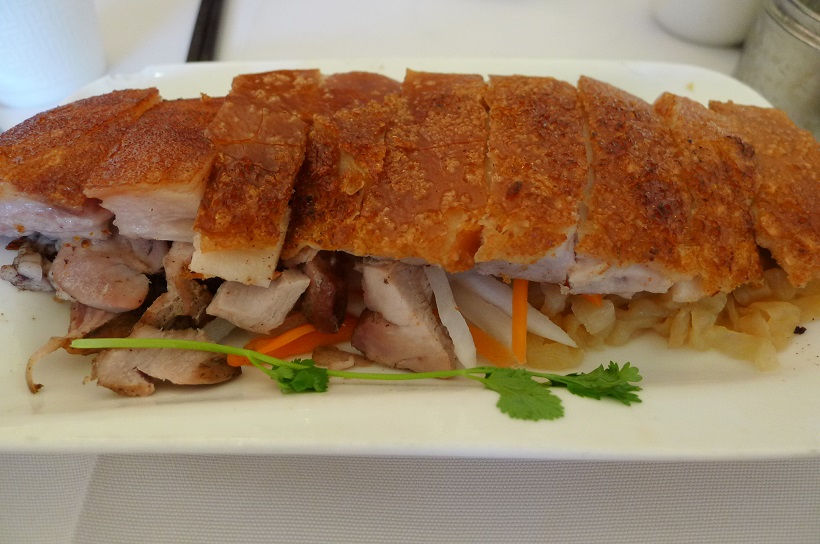 [Suckling pig]
The elegant premises, located on the second floor with views of the neighborhood, boasts a vaulted ceiling and an unusual (for a Chinese restaurant) open kitchen.
Map: Sunset Park's Dim Sum Renaissance:


· All Posts by Sietsema [~ENY~] Read More
Note: Restaurants on this map are listed geographically.

Copy Link
6409 8th Ave
Brooklyn, NY 11220
(718) 238-1122
(718) 238-1122
This is the very newest of Sunset Park’s dim sum dining halls, with a décor similar to the other three, featuring a giant dragon and a giant phoenix, hanging chandeliers, and a touch of luxury in the napery and furnishings. Like the other places, it strives to present novel and even newly invented forms of dim sum.

6409 8th Ave, Brooklyn, NY 11220
This is the very newest of Sunset Park’s dim sum dining halls, with a décor similar to the other three, featuring a giant dragon and a giant phoenix, hanging chandeliers, and a touch of luxury in the napery and furnishings. Like the other places, it strives to present novel and even newly invented forms of dim sum.
6409 8th Ave
Brooklyn, NY 11220
(718) 238-1122