29 Restaurants That Define the East Village

Every week in this space, newly minted Eater columnist Robert Sietsema will zero in on a microneighborhood and its foodstuffs. We begin with a six-block stretch of Brighton Beach. 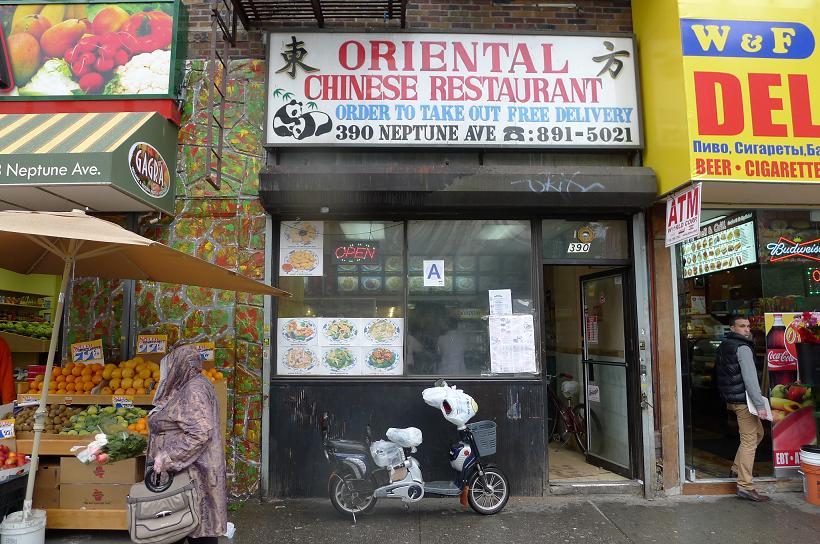 Several blocks from the Coney Island beach and lined with autobody shops, Neptune Avenue is perhaps most famous as the location of Totonno's Pizzeria Napolitano, one of the city's most venerable and ancient pizza parlors. But that's not the end of this whimsically named thoroughfare—it continues jogging eastward all the way to Sheepshead Bay. Between Ocean Parkway and Coney Island Avenue, a quarter-mile north of the elevated B and Q stop in Brighton Beach, it settles into an urban groove, turning into one of Brooklyn's most interesting and diverse multi-ethnic neighborhoods.

This six-block stretch is home to an Islamic mosque and a Jewish yeshiva, multiple taquerias, an abandoned gas station, a handful of high-rise and many more low-slung brick apartment buildings, plumbing and roofing businesses, and a few frame houses that suggest the neighborhood was in its heyday in the 1950s. Walking down the street you'll see Pakistanis, Indians, Mexicans, Salvadorans, Turks, Russians, and immigrants from former Soviet republics, many in colorful outfits. A time-stained Cantonese carryout with the seemingly redundant name of Oriental Chinese posts its menu in Russian, while a Pakistani sporting goods store offers cricket bats, cleats, and uniforms. One anonymous-looking building with a tall tin smokestack proves to be a mikvah, a Jewish ritual bath. 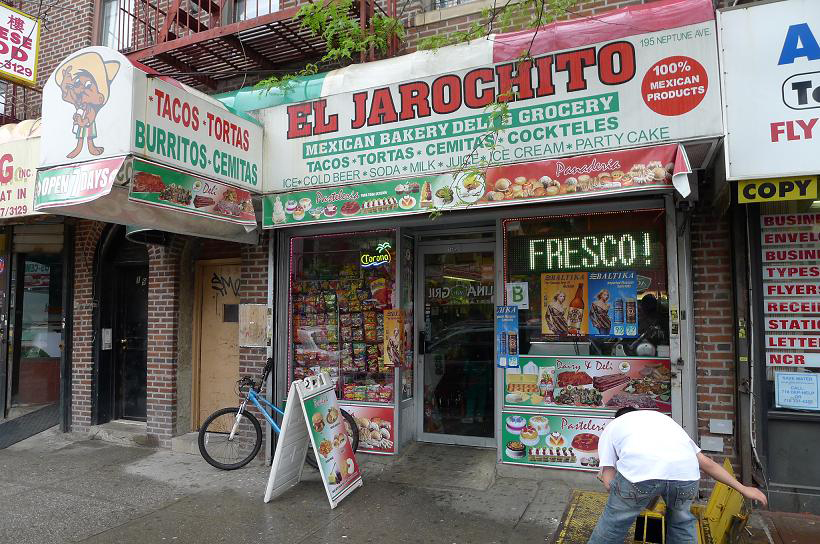 Among the many Mexican bodegas, taquerias, and car services, El Jarochito ("Little Rude One," 195 Neptune Avenue, 718-769-4447) takes as its mascot a sombrero-wearing Speedy Gonzalez. Inside is a grocery store well-stocked with dried chiles, fresh Mexican herbs, canned goods, kilo-size stacks of tortillas, and such kitchenware as wooden tamale presses and ceramic bean pots. A breeze from the street on a sultry day sets the piñatas on the ceiling swaying. Behind the grocery is a beautiful rustic taqueria with two counters and an open kitchen in which a humongous cauldron is perpetually bubbling with pig parts. Choose from a limited menu of tacos, quesadillas, tortas, and the round Pueblan sandwiches called cemitas. Fillings run to chorizo, carne enchilada (spicy stewed pork), carnitas (sautéed pork tidbits), beef tripe and tongue, and grilled skirt steak.

But if you visit on weekends, you can score El Jarochito's specialty, famous throughout this part of Brooklyn, of barbacoa: tender long-braised goat, sold by the pound or loaded into tacos. The chorizo sausage is also homemade, skinless and rendered into big chunks by frying. When you order tacos, they come with flame-grilled jalapenos and green onions with white bulbs, and a cup of flame-red salsa made on the premises. If you want your taco wrapped in a flour tortilla instead of a corn one, it's called a gringa ("white woman"), referring to the preference for flour tortillas in Mexican food eaten north of the Rio Grande. 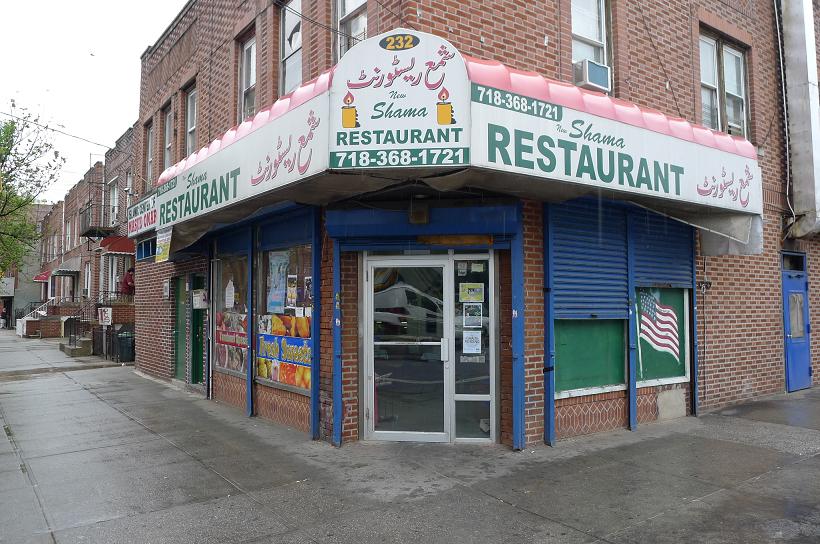 Across the street on the next block west is New Shama (232 Neptune Avenue, 718-368-1721), a Pakistani restaurant that shares a building with Omar Masjid, a mosque that became a center of relief efforts following Hurricane Sandy. A series of glass cases form an L, with hot stuff on one side and milk-based sweets—many of them fudge-like—on the other. Half the hot receptacles hold meat and poultry dishes, the other vegetarian items, many involving lentils or okra in thick curry gravy.

Keema (ground lamb) and pata (goat feet) are prominent offerings from an unwritten menu that changes daily on the hot side. A glass case filled with minced-chicken kebabs and samosa stands right next to the door, and there is plenty of seating at four-tops. A woman behind the counter takes your order with dignified aplomb and is glad to explain each of the dishes. And don't miss the tandoori breads like garlic naan, or the tandoori chicken, either. 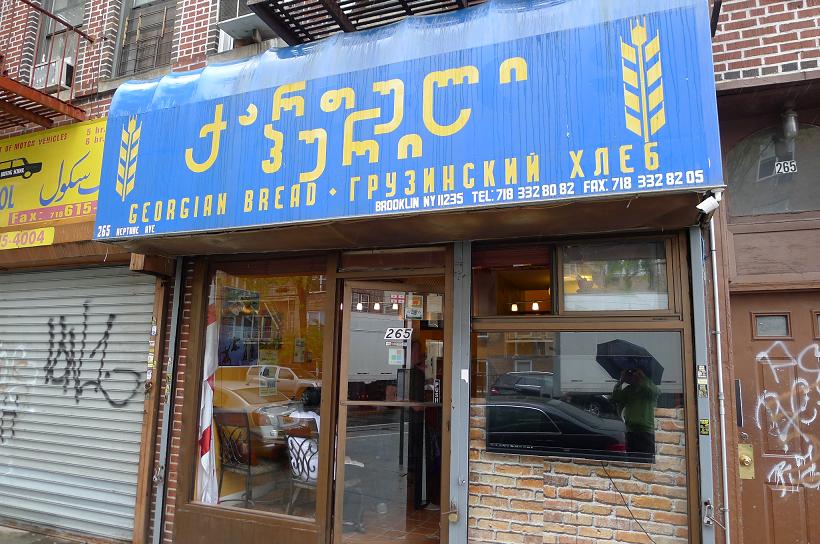 Perhaps the most unusual food-related establishment in the area—and one that draws visitors from across the city—is Georgian Bread (265 Neptune Avenue, 718-332-8082). Hailing from the Republic of Georgia in the Caucasus Mountains, this bakery offers khachapuri —a nicely browned, circular flatbread filled with suluguni, a salty pickled cheese made from a combination of cow's and goat's milk. A smaller, turnover-size khachapuri is also available, as are a variety of other breads, including one shaped like a champion wrestler's belt, with long, baguette-like extensions on both ends.

You'll likely finish your khachapuri on the way back to the subway stop—it's that good—but also consider returning home with a bag of frozen khinkali, a Georgian dumpling shaped like the kind of ice pack you put on your head for a hangover. Stuffed with lamb and onions, these need to be boiled for 15 minutes or so, then dressed with one of the sauces sold in the refrigerator case of the bakery, tasting something like ketchup with cilantro. Wolf down one dumpling, and you'll find yourself returning to Georgian Bread the next week for more khachapuri and khinkali.

Read More
Note: Restaurants on this map are listed geographically.

Go on weekends for the famous barbacoa or the homemade chorizo.

Come for the khachapuri, a nicely browned, circular flatbread filled with suluguni, a salty pickled cheese made from a combination of cow's and goat's milk.

Notable in that it's a Cantonese carryout joint with a menu in Russian.

Go on weekends for the famous barbacoa or the homemade chorizo.

Come for the khachapuri, a nicely browned, circular flatbread filled with suluguni, a salty pickled cheese made from a combination of cow's and goat's milk.

Notable in that it's a Cantonese carryout joint with a menu in Russian.