Restaurants for a Romantic Night Out in NYC

14 Bars to Cheer on Your Favorite Sports Team in NYC

Where to Find the Iconic Pizzerias of New York City

Every week in this space, newly minted Eater columnist Robert Sietsema will zero in on a microneighborhood and its foodstuffs. We continue by zeroing in on Jackson Heights. 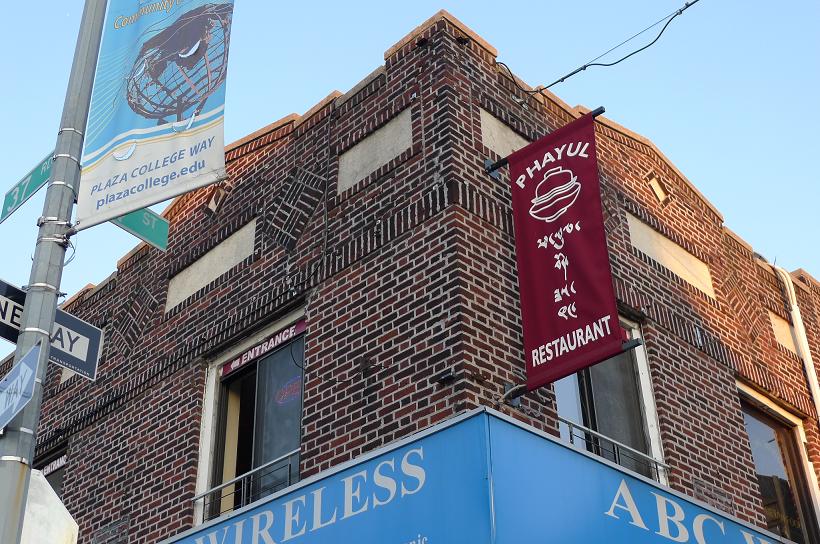 If you're accustomed to associating Jackson Heights with Punjabi buffets, Pakistani kebab houses, and greengrocers' trundling displays of wild-looking vegetables like bitter gourd and tinda out onto the sidewalk, the evolving complexion of the neighborhood may surprise you. Within a brief radius of the iconic corner of 74th Street and 37th Road, where subway trains scurry off from a modern station to remote corners of the city, there are now a dozen dining destinations hailing from the Himalayas.

Appearing with regularity over the last five years, these specialize in the steamed dumplings known as momo, fiery meat salads, hand-pulled noodles swimming in mild soups, and rich goat and beef curries that owe as much to other South Asian cuisines as stir-fries on the same menus do to Chinese cooking. Here are several places where you can chow down on Nepalese and Tibetan, with a little Bhutanese thrown in for good measure. 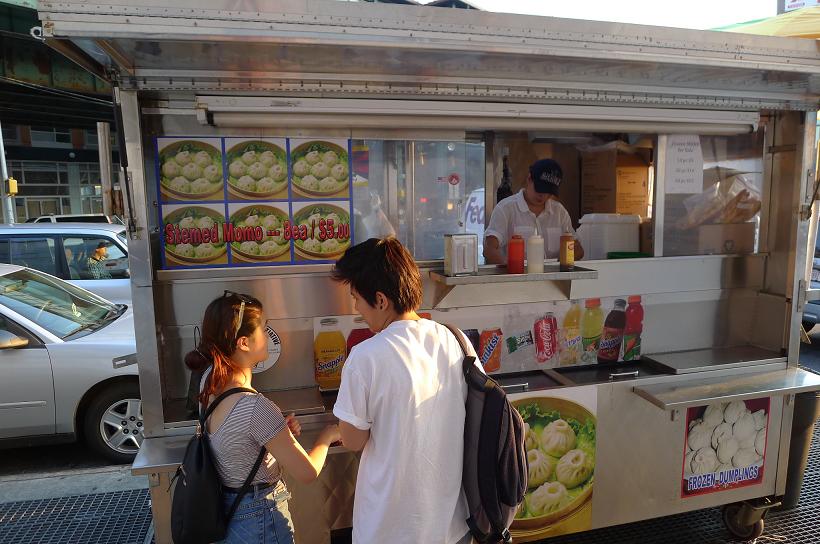 The place to gain a first foothold is Potala Fresh Momo (corner of Broadway and 37th Road), a food cart that name-checks Tibet's most famous cliff-top palace, one of the dalai lama's traditional residences. Through the cart window you'll see humongous metal steamers the size of spare tires, from which the beaming attendant carefully chooses your eight dumplings and deposits them on a disposable plate.

These momo are plain-but-agreeable food, small beef meatballs swaddled in thick noodle wrappers. Three sauces are provided: a gritty red chile puree something like Arab harissa, a soy sauce that delivers a vinegary kick, and a thin, runny mayo. Squirt, squirt. If you betray the slightest disappointment with these sauces, the gal will pull three more out from their hiding place under the counter: ketchup, mustard, and sweet-pickle relish, all made by Heinz. Oddly, most Himalayan customers I saw noshing around the cart seemed to prefer pickle relish. 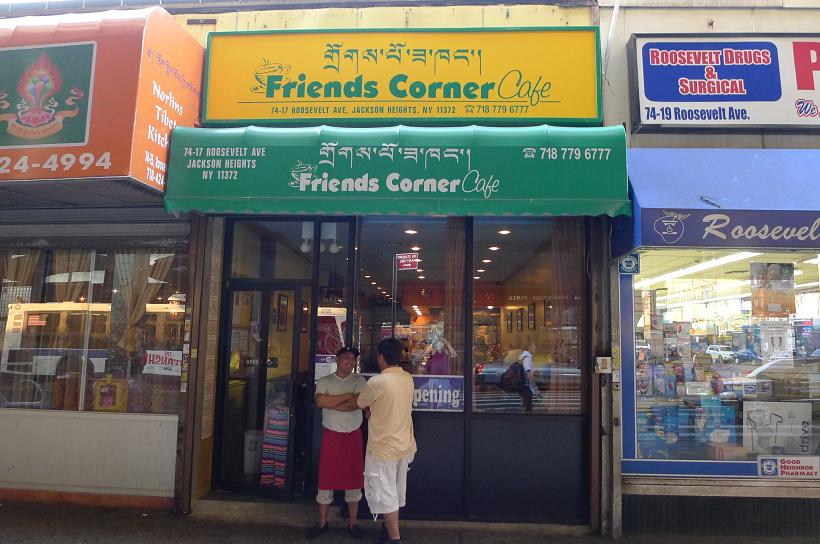 Next rung up the ladder of expense (and all the rungs of this ladder are low indeed) is a place that opened recently right on Roosevelt Avenue. Friends Corner (74-17 Roosevelt Avenue, 718-779-67770) has ambitious goals, offering inexpensive sustenance with an international flare. Flip open the menu and you'll spot a quesadilla, Caesar salad, Reuben sandwich, and Cajun chicken wrap. Skip all these and turn the menu over, where the assortment of dishes includes Mo Thug, a momo soup with herby dumplings that sounds like the name of a rapper; and Then Thug (his washed-up older brother?), a soup of ragged wheat noodles for which the best single descriptive is "rustic." 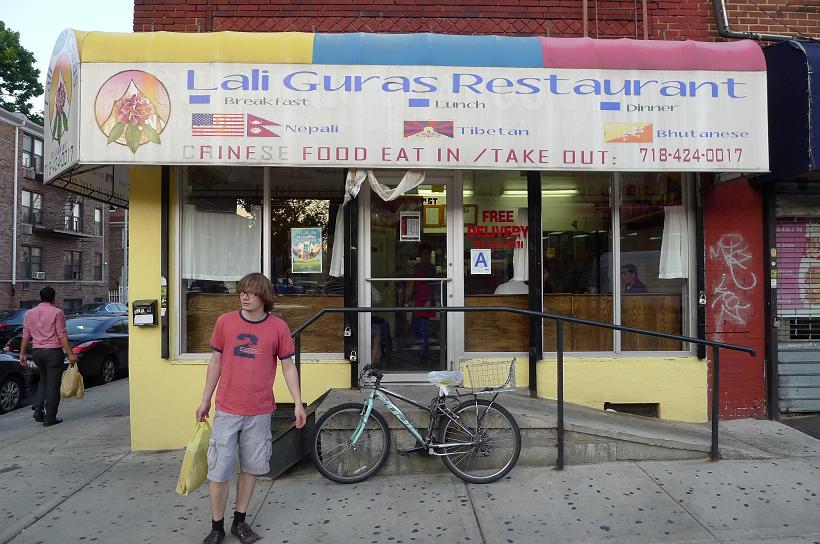 Lali Guras (37-63 76th Street, 718-424-0017) looks like it might have once housed a Chinese carryout, and actual seating is limited to two tables. The name telegraphs the Nepalese identity of the cafe ("lali guras" means "red rhodedendrums," the country's national symbol), though a banner also advertises Tibetan and Bhutanese fare. There's a nice Nepalese thali (set meal on a tray) focusing on a goat confit and the puffy steamed bread called tingmo; and a Chinese lo mein that's been altered for Himalayan tastes. Heck, you can even get fried chicken wings, Chinese-carryout style.

For Buddha's sake don't miss Phayul (37-65 74th Street, 718-424-1869), a café that perches on the second story of a building as if it were the hilltop fortress in Lost Horizon (pictured above). Follow a winding stairway with a door on 37th Road upward past a discount store and Tibetan beauty parlor until you reach the peak—a room with comfortable tables overlooking the hubbub on the streets below. The exiled 14th dalai lama beams down from a wreath-festooned frame. Phayul makes Tibetan cuisine seem like you could eat it and no other and be perfectly happy the rest of your days. Not just with blood sausages that would make a Frenchman sit up and take notice, but also with bowls of cold noodles fashioned from white translucent mung-bean starch that loll in a cool broth of soy and green onions. This laphing is perfect summer fare, and the Japanese would covet it if they only knew it existed. Finally, there's a wonderful shredded beef salad sprinkled with – of all things – Sichuan peppercorns, which you'll find with regularity in modern Himalayan-American cooking, evidence not only of the proximate location of that Chinese province to Tibet, but also of a migration of Tibetans from Sichuan to Tibet and thence here. 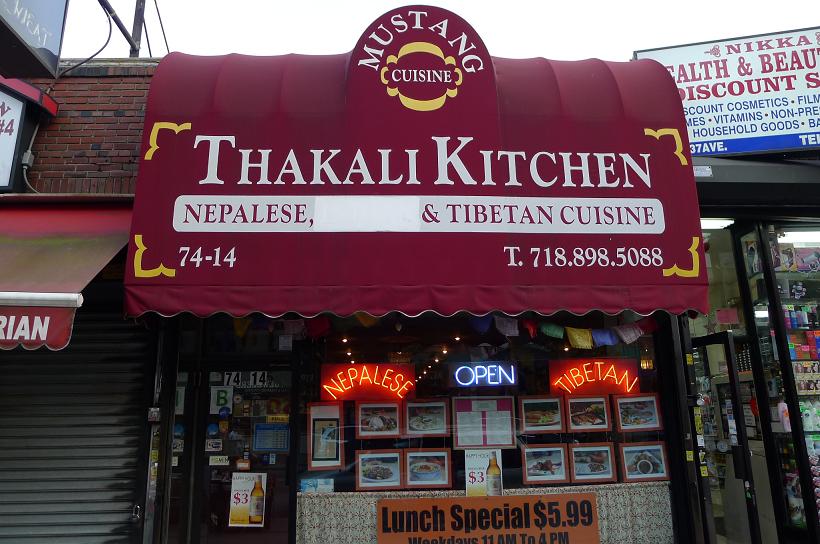 Best of these, perhaps, is Mustang Thakali Kitchen (74-14 37th Avenue, 718-898-5088). Though it sounds like some sort of cowboy chuck wagon, this Nepalese restaurant represents for Mustang, a region of lush mountain valleys on the country's northern border often compared to Switzerland. The Kitchen is the most fully realized of the city's Himalayan restaurants, comfortably and attractively appointed, with a lengthy menu it would take many visits to fully explore.

Begin with a serving of the lamb jerky called sukuti sadeko, then perhaps go on to bhatmas chiura, a soybean salad dressed with mustard oil. "Don't miss" dishes include sel roti, a deep-fried hoop of compressed rice that functions as bread, and the buffalo thali, which includes potato curry, mustard greens, and multiple condiments on a gleaming tray, with the buffalo in the stew presumably standing in for the Himalayan favorite, yak. Really, if this meal doesn't make you stand up and dance, nothing will.

Try the Mo Thug or the Then Thug

Try the goat confit with tingmo.

Go for the blood sausage, the laphing, the shredded beef salad, and the bowls of cold noodles fashioned from white translucent mung-bean starch.

To get: sukuti sadeko, bhatmas chiura, sel roti and the buffalo thali.

Try the Mo Thug or the Then Thug

Try the goat confit with tingmo.

Go for the blood sausage, the laphing, the shredded beef salad, and the bowls of cold noodles fashioned from white translucent mung-bean starch.

To get: sukuti sadeko, bhatmas chiura, sel roti and the buffalo thali.