Where to Eat at Rockefeller Center

A Guide to the Most Kid-Friendly Restaurants in NYC

All photos by Robert Sietsema

Bushwick has been harboring a very nice mix of restaurants lately, and they fall into two distinct categories: hipster-run places, and places run by Latin American immigrants. Of course, the hipster ones are already extensively covered, so let's take a peak at some of the Latin ones, which are often excellent. Happily, some—like Guacoco—fall into both categories.

All photos by Robert Sietsema unless otherwise noted. 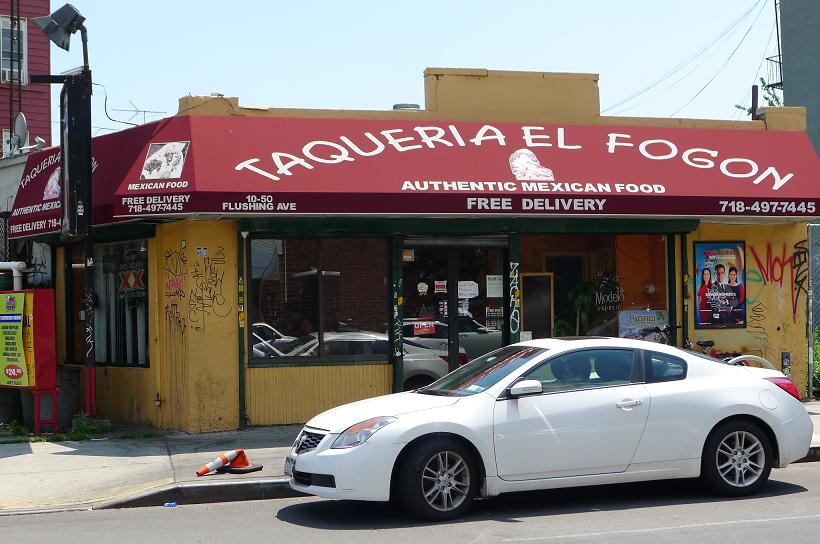 While you're in the vicinity, check out the Onderdonk House (1820 Flushing Avenue), a Dutch stone farmhouse dating to 1709, suggesting what Bushwick was like three centuries ago. 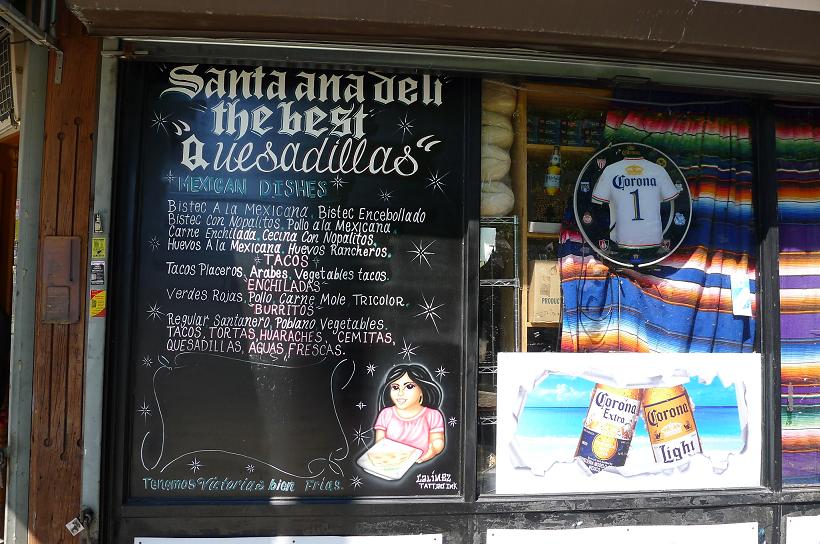 There are no shortage of taquerias in Bushwick, numbering approximately two dozen if you include the makeshift quesadilla counters set up in the backs of bodegas. One of the best places to score a quesadilla (not the bar-food staple, but a giant makeshift corn tortilla flopped over a variety of ingredients to make a sort of super-taco) is Santa Ana Deli (171 Irving Avenue, 718-628-4691), where you can also get such southern Mexican arcana as tacos placeros ("market tacos," including one absurdly but deliciously stuffed with a chile relleno) and tacos Arabes (rolled up into a Lebanese-inspired pita sandwich.) The dining room is airy and comfortable.

For a pleasant Mexican restaurant right on Maria Hernandez Park, try Taqueria El Paisa (324 Suydam Street, 718-417-0381). If the weather is fine, carry the food out and sit in the park. Once known as Bushwick Park, it was renamed after an anti-drug mom who was shot dead as she stood in the window of her Starr Street apartment in 1989, presumably by the drug lords who then plagued the neighborhood. The land was once owned by P.T. Barnum. For Mexican pastries, there's the long-running Gaby's Panaderia (238 Knickerbocker Avenue, 718-418-8821), one of the neighborhood's earliest Mexican institutions, founded in the late 90s. 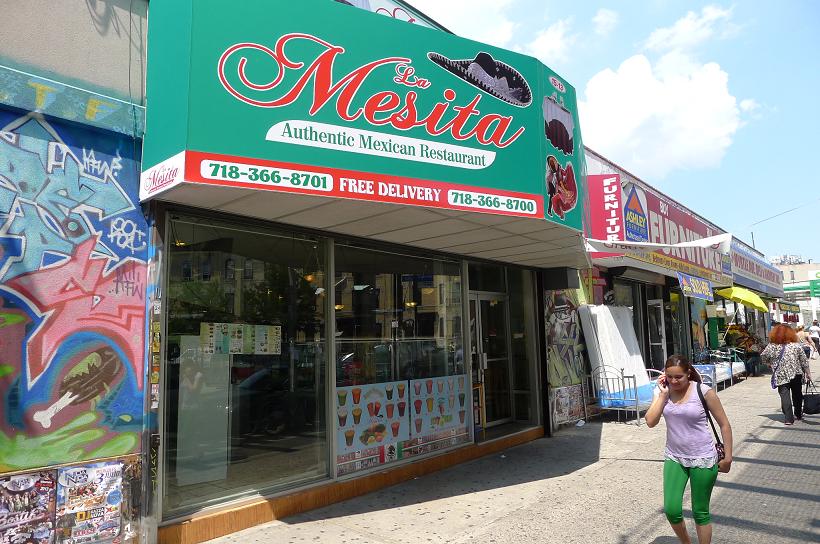 For Mexican sandwiches, including tortas, cemitas, and the wonderful gutbomb called pambazo, head for newcomer La Mesita (1513 Myrtle Avenue, 718-366-8700), in a corner of Bushwick considered a Dominican stronghold. Combining a taco factory and taqueria, longtime hipster favorite Los Hermanos (271 Starr Street, 718-456-3422) has undergone a recent renovation and expansion, and some of the old charm is gone. 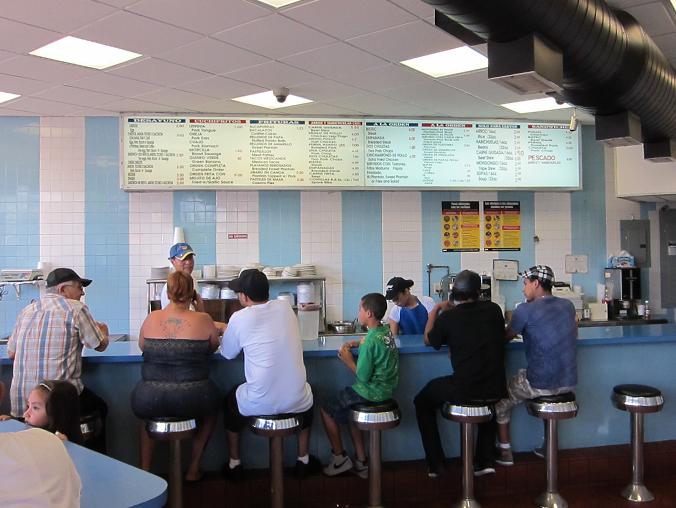 Just down Myrtle Avenue from La Mesita find La Isla Cuchifritos (1439 Myrtle Avenue, 718-417-0668), a Puerto Rican spot specializing in pork rinds, pig ears, roast pernil, rotisserie chickens, and any number of little pork-based snacks, many of which warm under the light bulbs in the window. The lunch counter with swiveling stools is one of the way-coolest spots to be seen in Bushwick. For Dominican empanadas and alcapurrias, check out the Dona Raquel Cart at the corner of Harman and Knickerbocker. A brand-new spot, Nelson Paella (200 Knickerbocker Avenue, 718-456-1500) offers the full range of Dominican cooking, emphasizing pork and seafood, in a sit-down-and-enjoy setting. At don't be surprised that spaghetti sodden with tomato sauce is one of your starch choices. 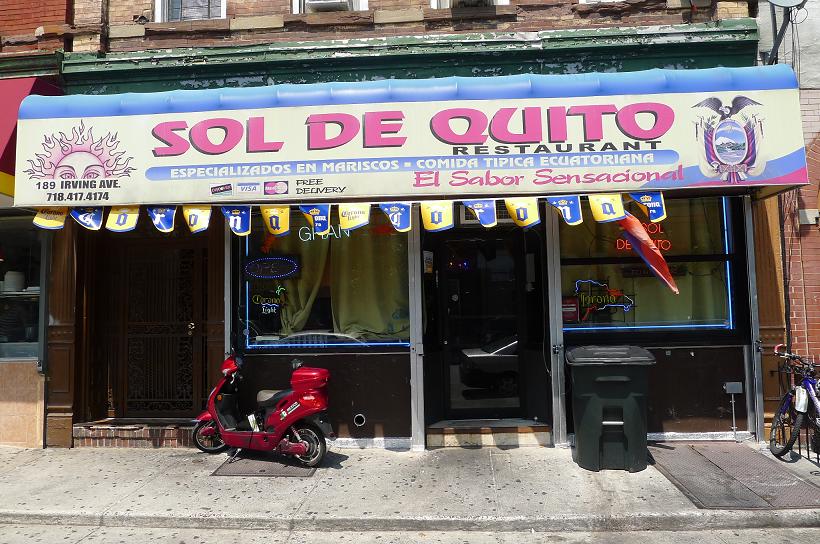 For Ecuadorian fare, you can't so better than the poetically named Sol De Quito (160 Irving Avenue, 718-417-4174), where you can get one of the omnibus platters that resemble the Ecuadorian flag called banderas, a great goat stew, or any number of Ecuadorian-Chinese chifa dishes, including a very lush version of fried rice. Just around the corner is a Peruvian place, Chimu Express (180 Irving Avenue, 718-443-0787), specializing in rotisserie chickens with a memorable spice rub and piquant and creamy green sauce (the secret: it's made with mayo), the beef-heart kebabs called anticuchos, garlic shrimp, and meat-stuffed potato dumplings. As with Sol De Quito, there's plenty of reworked Chinese food on the menu, too.

Salvadoran pupusas are found along the south side of Maria Hernandez Park at the diminutive El Salvador Restaurant (276 Knickerbocker Avenue, 718-366-3939) and elsewhere. Hipster-run Guacuco (44 Irving Avenue, 347-305-3300) is a Venezuelan arepera specializing in sandwiches deposited on the fluffy white corncakes called arepas. 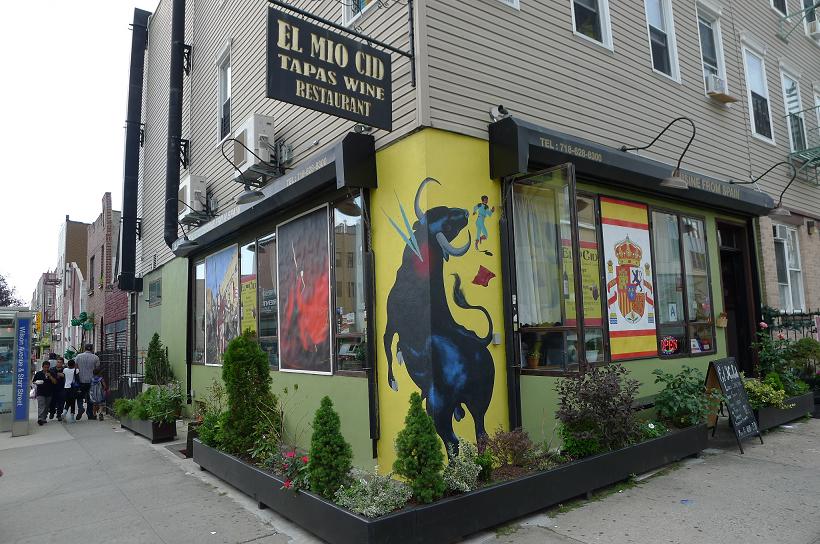 Perhaps the strangest selection in this panoply of Spanish-speaking places is El Mio Cid (50 Starr Street, 718-628-8300), a formal restaurant with a bar that hearkens back to Spain for its menu. While you might expect this sort of restaurant in the West Village, Astoria, or East Elmhurst, it comes as a shock here—until you remember that many Dominicans trace their roots to the Galicia region of Spain.

Read More
If you buy something or book a reservation from an Eater link, Vox Media may earn a commission. See our ethics policy.

A great place for giant quesadillas and tacos placeros.

One of the neighborhood's earliest Mexican institutions, come here for pastries.

Here you can get one of the omnibus platters that resemble the Ecuadorian flag called banderas, a great goat stew, or any number of Ecuadorian-Chinese chifa dishes.

A great place for giant quesadillas and tacos placeros.

One of the neighborhood's earliest Mexican institutions, come here for pastries.

Here you can get one of the omnibus platters that resemble the Ecuadorian flag called banderas, a great goat stew, or any number of Ecuadorian-Chinese chifa dishes.