8 Places to Watch the World Cup in NYC

6 Pop-Up Bars for Celebrating the Holidays This Year

The scene outside Gray's at around midnight on January 9, by Robert Sietsema

During the recent Papayagate disaster, Greenwich Village's decades-old Gray's Papaya shut down due to a rent increase that went from $30,000 per month to a whopping, unconscionable $50,000 per month. Quite simply, no one could sell that many hot dogs. The outpouring of outrage was unprecedented, from those who regarded the stand-up eatery as an irreplaceable dining resource for cheap eats any time of the day or night, to those who saw it more sentimentally as a uniquely New York dining institution, a colorful gastro-monument that should have been preserved for future generations.

Gray's is being replaced by one of those expensive juice places, a franchise joint not likely to last very long at that location. (I give it nine months, tops.) But maybe the whole point was to get a faithful, long-lasting tenant out, since real estate interests paradoxically often prefer revolving-door tenancies: Each new lease in an up market represents greater profits.

Squeezing as much money out of a property despite any other consideration, known to real estate developers as the doctrine of "highest and best use," means that it doesn't matter if a tenant (if this case, a restaurant) is absolutely vital to a community and its history, only that the owner be able to squeeze the maximum profit possible out of a particular property. This was most recently seen with St. Vincent's, in the same neighborhood as Gray's, where an ancient and architecturally distinguished hospital essential to the medical health of the community was unceremoniously tossed to make way for luxury condos. 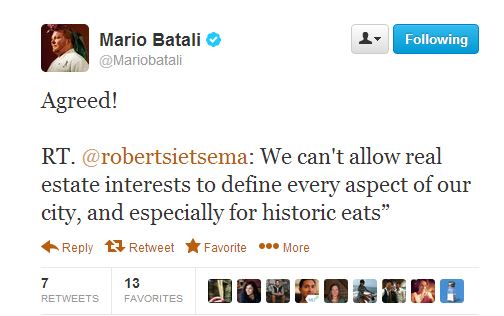 At the time of Gray's demise, I tweeted there should be some sort of civic protection for beloved restaurants of cultural and historic significance — living museums of gastronomy, if you will. Many chefs, restaurateurs, and food writers — among them Mario Batali, Danny Meyer, and Pete Wells — tweeted their support for some sort of preservation program. Here is what such a program might look like.

Let's say we appoint a committee of three, consisting of a chef, a city councilperson, and a real estate representative, who are tasked with the responsibility of selecting a list of irreplaceable dining institutions that deserve to be officially protected. The committee can make choices themselves, and also take suggestions from the public. Let's start with 30 places as a pilot program.

When the lease expires at one of these establishments, or if the restaurant defaults on its lease, or suffers damage from a catastrophic weather event, or through unforeseen explosion, fire, or other damage, the committee leaps into action. If a lease is involved, it automatically mediates the negotiations. If necessary, the books of the restaurant will be examined, and a fair rent increase determined if a rent increase is found to be unaffordable. In the case of disasters, the committee will intervene with government agencies and private nonprofits to seek priority assistance.

If the restaurateurs who operate a place want to close it, successor lessees willing to continue in the tradition will be located, vetted, and the lease transferred. In other words, this committee will be charged with doing everything possible, including limiting rent increases to those determined fair, to keep historic places in business.

Landlords may oppose the program, reasoning that no one should be able to limit what they can do with their properties. But many city and state laws already do provide limits, including rent stabilization for residential properties, commercial zoning, Department of Buildings regulations, and the work of the Landmarks Preservation Commission over certain landmark zones and buildings.

Here are my nominations for restaurants, bars, and markets most worthy of being preserved, including several that may already be in danger. Please suggest your own — or dispute any of these — in the comments section below. Let's get the dialog started!

And let's not forget the last remaining branch of Gray's Papaya, on the Upper West Side…

Read More
If you buy something or book a reservation from an Eater link, Vox Media may earn a commission. See our ethics policy.

The dark antique woodwork around the bar, the stuffed stag heads, the German beer on tap, the waitresses in their dirndls, make this place seem like a wayside inn in Bayern, circa 1849, when the woodwork was carved.