Where to Eat in Fort Greene and Clinton Hill Right Now

On a hell-for-leather run through large swaths of New Jersey last Saturday—comprising 10 hours of consumption and almost 200 miles of driving—a carload of Eater writers fulfilled the dream of children everywhere and spent an entire day eating nothing but ice cream. New Yorkers have plenty of great old fashioned and newfangled ice cream spots here in the five boroughs, but ice cream never tastes so good as when you're on a road trip. The mix of Jersey ice cream styles is slightly different than what's on offer in New York, and you can't beat the prices, nor the taste of the ice cream with the breezes of the Meadowlands, the Atlantic Ocean, or even just Lake Hopatcong in your nostrils.

The crew left the city at noon through a delightfully traffic-free Holland Tunnel and hit stop number one in Bloomfield, NJ in under 20 minutes. 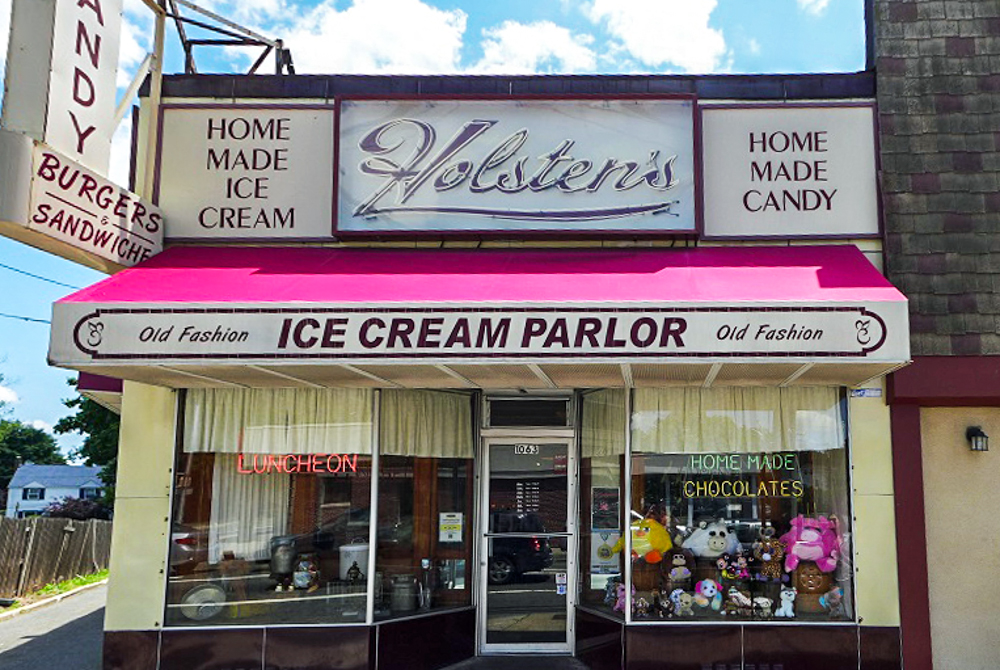 There are a few important things to know about Holsten's Brookdale Confectionery (1063 Broad St., Bloomfield, 973-338-7091), located 19 miles outside of Manhattan in Bloomfield, New Jersey. First, they make their own ice creams in a bevy of wonderful flavors. Second, they serve a damn good sundae and malted milkshake. Third, at 12:30 p.m. every Saturday, about 100 tourists bussed in from Times Square swarm the place to take a look at "the booth," while Journey's "Don't Stop Believin'" blasts on repeat. The final scene of the final episode of the HBO series The Sopranos was filmed here at Holsten's, thus it's a bit of a small time tourist attraction and one of the last stops on a weekly, three hour-long Sopranos bus tour, still going strong seven years after the finale.

It's too bad that the tourists shuffle in, grab their allotted bags of onion rings, take a photo at the booth, and shuffle out, as they're missing out on a truly wonderful ice cream experience, and one of the highlights of our trek zigzagging Northern New Jersey's ice cream destinations. Holsten's opened back in 1939 as Strubie's and was bought by the current owners in 1969. It maintains the old ice cream parlor feel with ample seating in the back and a long soda fountain up front with a line of red vinyl-covered swivel stools across from a candy counter. 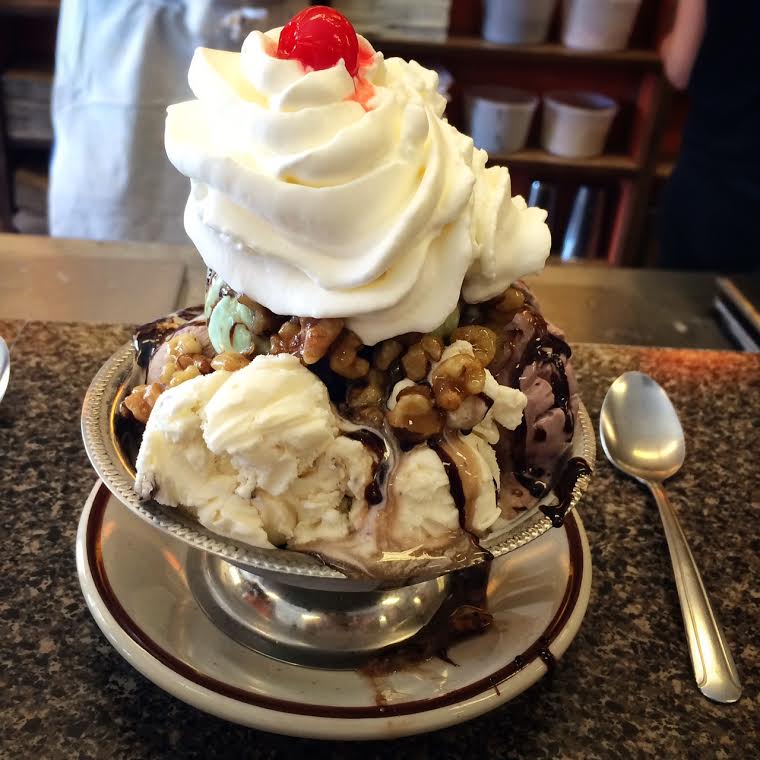 The fountain is mostly staffed by high schoolers and college kids on summer break, eagerly hand packing pints to go and constructing hot fudge sundaes in fluted parfait glasses or aluminum bowls with saucers underneath to catch the pools of melting ice cream and sauces. As at any appropriate old school parlor, nuts come dry or "wet" (mixed with syrup), the ice cream is made in-house, whipped cream is fresh, and the milkshakes come in a frosted mug with the extra served in the mixer on the side.

Those onion rings, unlike the ice cream and the candy, aren't made in-house (though Tony Soprano called them "the best in the state" in that infamous episode). Here savory food is available, but just a prelude to the main event. We pushed them aside and went straight for the good stuff: a cold chocolatey malt and a "Holsten's Special" sundae of mint, black raspberry, butter pecan, and chocolate ice cream covered in hot fudge, wet walnuts, whipped cream, and a cherry.

A location of Rita's, the well-known Pennsylvania-based Italian ice and custard chain, stands right across the street from Holsten's, serving quick fixes of cones and ices out of a to-go window. It's a solid chain, serving better custard than is generally on offer in Manhattan (Shake Shack notwithstanding) and good Italian ices, but not special enough for a dedicated trip. As devoted ice cream reporters, we got a twist for the ride to the next stop. 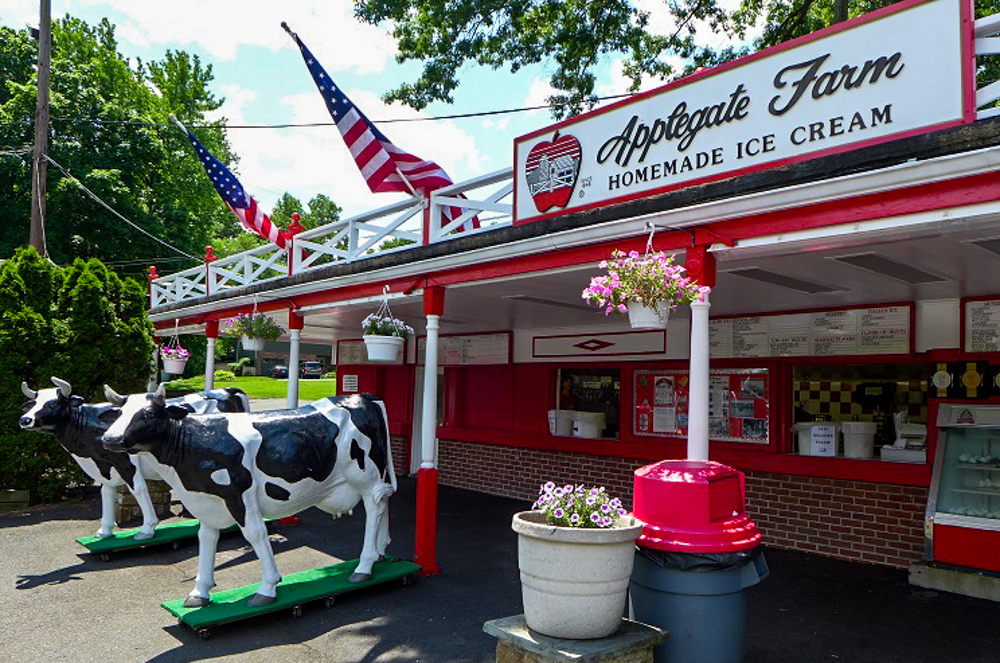 A 10 minute's drive through well-kept suburban parkland — kids playing soccer, policemen chatting with locals, joggers, strollers, etc. — brought us to Applegate Farm Creamery (616 Grove St, Montclair, 973-744-5900). The website, plastered in old timey photos of barns and farmhouses and cows, seems to imply this place is actually a still a farm, and when one of us visited four years ago, there was still a petting zoo on the property. Thus, we figured this a perfect stop for a rendezvous with friends with three small girls. Turns out Applegate Farm is a big parking lot with some cow statues, a big pretty to-go counter, and a radio pumping out Top 40 hits. No benches, no tables. Definitely no petting zoo. 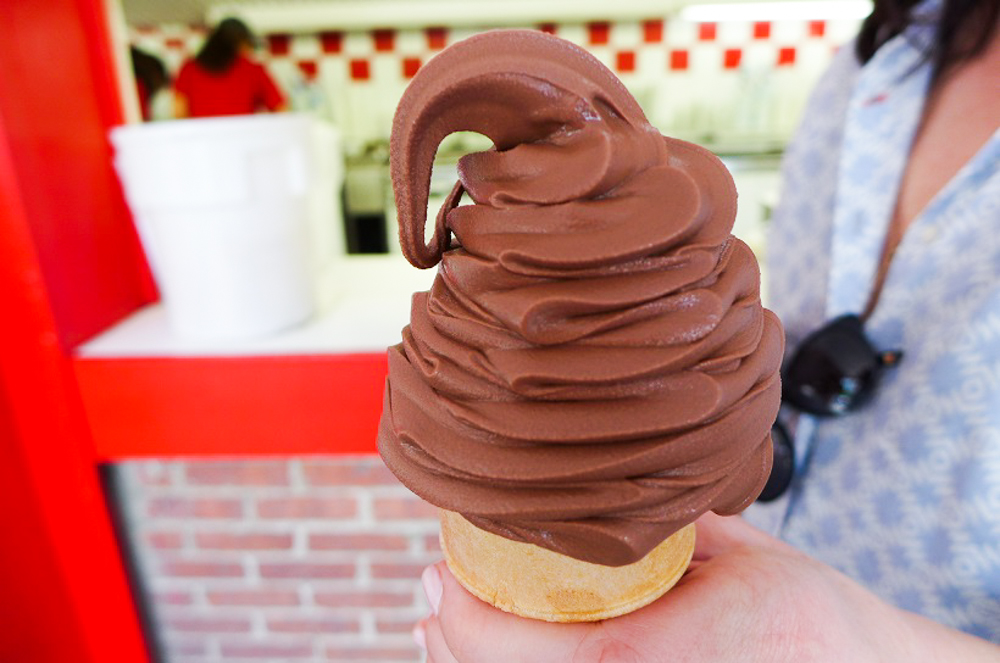 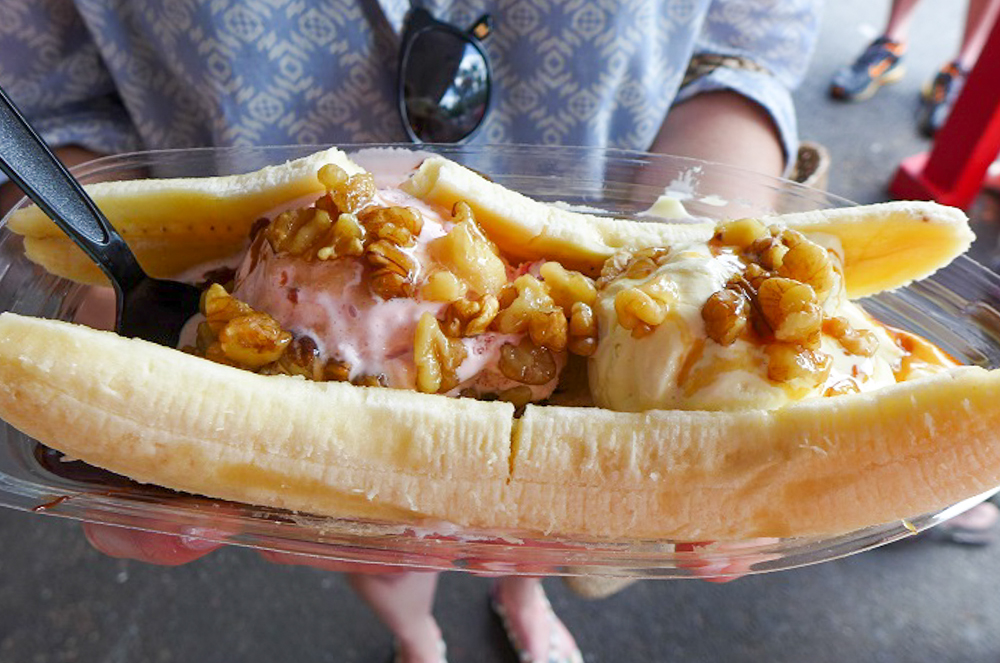 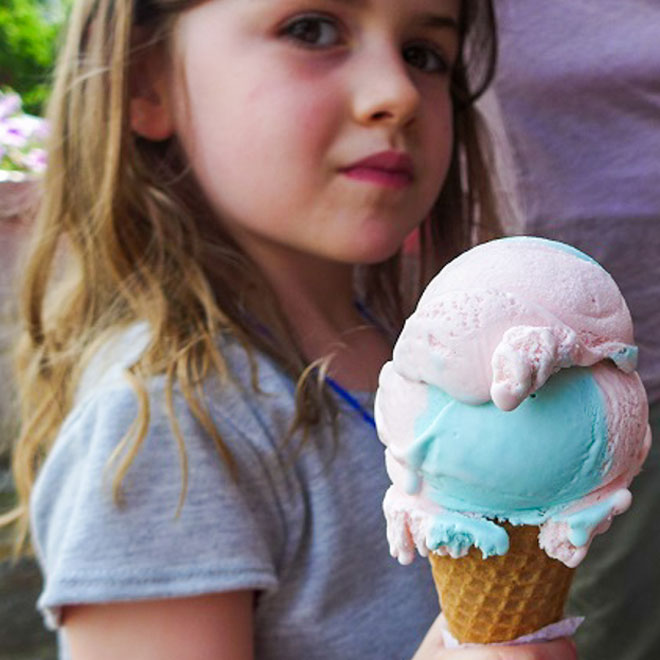 Still the ice cream is homemade and the menu covers all the bases from ice cream sodas to sundaes to soft serve. Our banana split came in a big plastic boat (fun) but the product was no match for Holsten's. The chocolate soft serve, on the other hand, was thick, delicious, and fantastic looking. And the cotton candy ice cream was a huge hit for the kids.

Catapulted from sedate North Montclair to the untamed western part of the state, we drove down Interstate 80 with white fleecy clouds blowing across the sky like lambs in a hurricane. Our destination was a stand founded in 1975 as Cliff's Dairy Maid, but now called simply Cliff's Homemade (1475 U.S. 46, Ledgewood, 973-584-9721). It attracts vacationers from a nearby resort lake, in addition to shoppers for farm equipment, auto parts, and discount furniture along this strip of U.S. 46 in Ledgewood. But mostly it attract families with lots of kids, who park themselves at one of the nicely spaced picnic tables in the grove of trees out back, and all troubles are forgotten as entire families find themselves coated with sticky ice cream from the many humongous selections available. 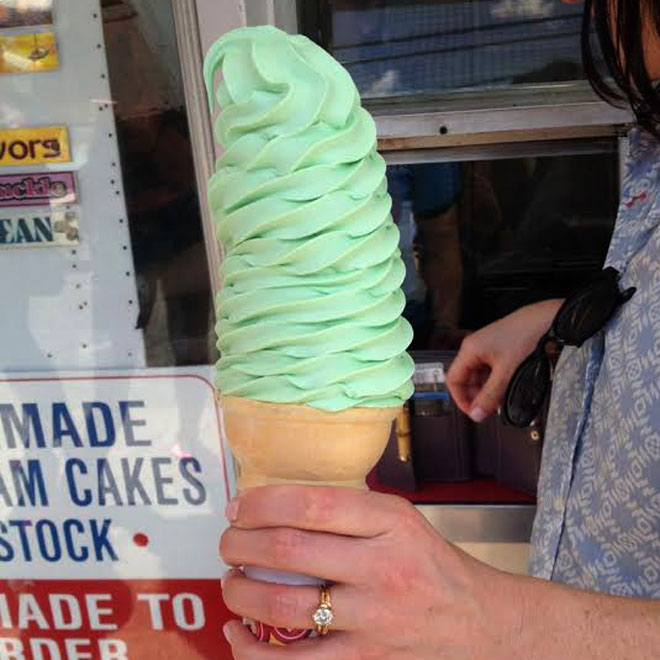 As we stood in line to order, a couple of kids were desperately trying to keep up with the melting as they licked cones so comically large, that the volume of ice cream was actually bigger than their heads. We had to have one, so we ordered mint soft serve made into a "Skyscraper." The place offers plenty of hard ice cream, too, with a vast range of punning and bizarre flavors. To go into a deluxe waffle cone, we asked for a scoop of Caramel Conundrum, which turned out to be spectacular, with hunks of actual caramel and candy in the ice cream, and another of Minty Mountain Hop – and for the next couple of hours tried to remember how that Led Zep song went. Noticing the place also had hamburgers and hot dogs, we ordered up some with onion rings. Quite good! The hamburgers had a "humid and hot day at the lake" taste to them. The rings were appropriately greasy. The foot long was almost a foot long. 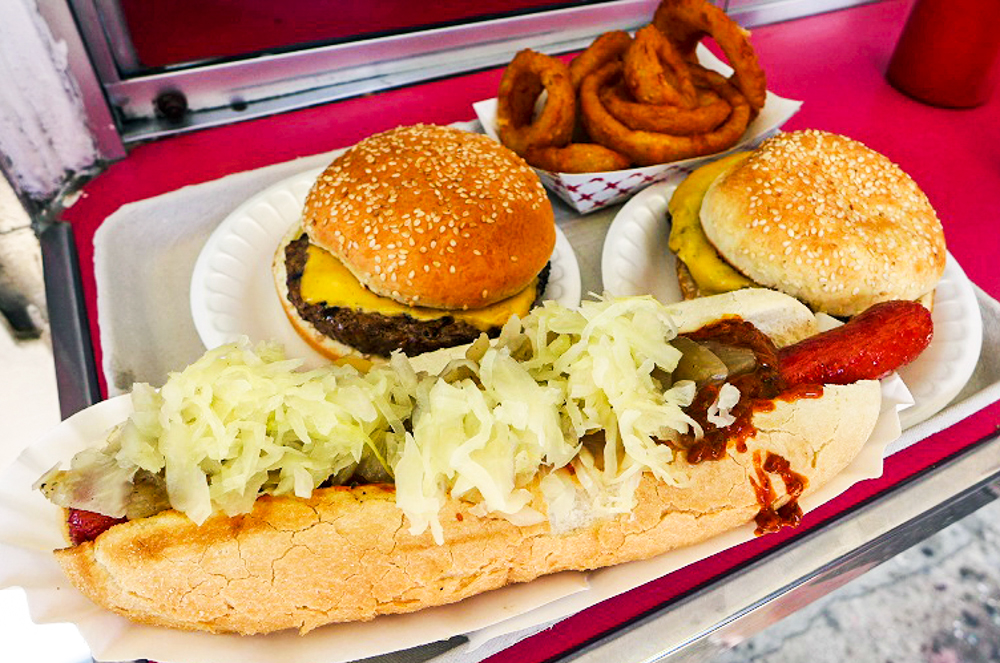 Our next objective was so far away we almost despaired of getting there. As it happened, the trip was only an hour and a half, but it involved almost going back the New York City before shooting southward toward the Amboys. On the way we were dogged by tweets telling us where to stop on the way, such as one from Floyd Cardoz advising that the best maple walnut ice cream in the state was to be found in West Orange. We love the nut flavors of ice cream, but didn't have time to stop in our pell-mell rush toward the Jersey Shore. 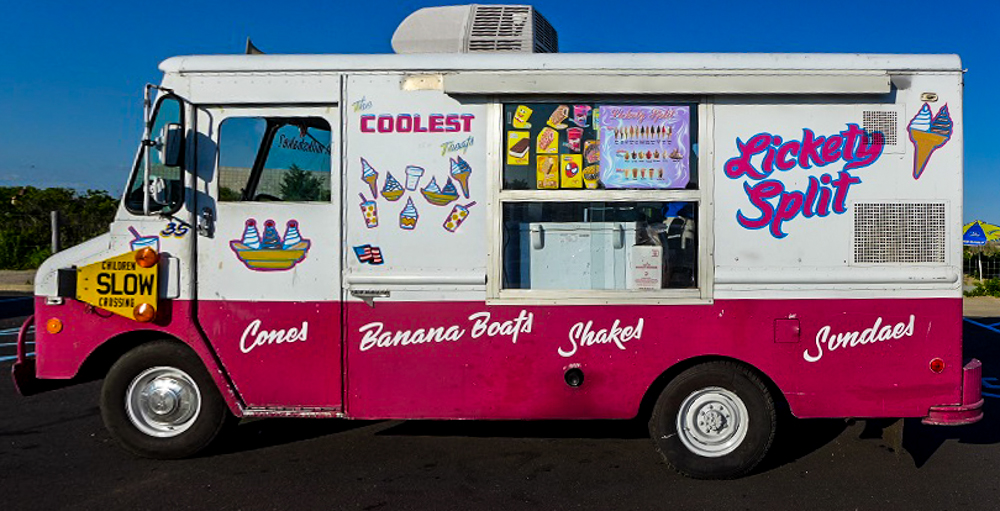 We decided we'd stop at Sandy Hook, the state's best beach, before proceeding on to the last ice cream joint, which happened to be a seaside-style custard stand. Visiting an actual beach before eating the custard, we decided, was a good idea, to make our assessment more accurate. And so we sunbathed. And upon returning to the car, we stumbled upon an ice cream truck with the semi-obscene name of Lickety Split. We ordered a cone with colorful sprinkles, but it was just OK and destined to be discreetly put into the trashcan. Such are the tribulations of the All Day Ice Cream Eater. 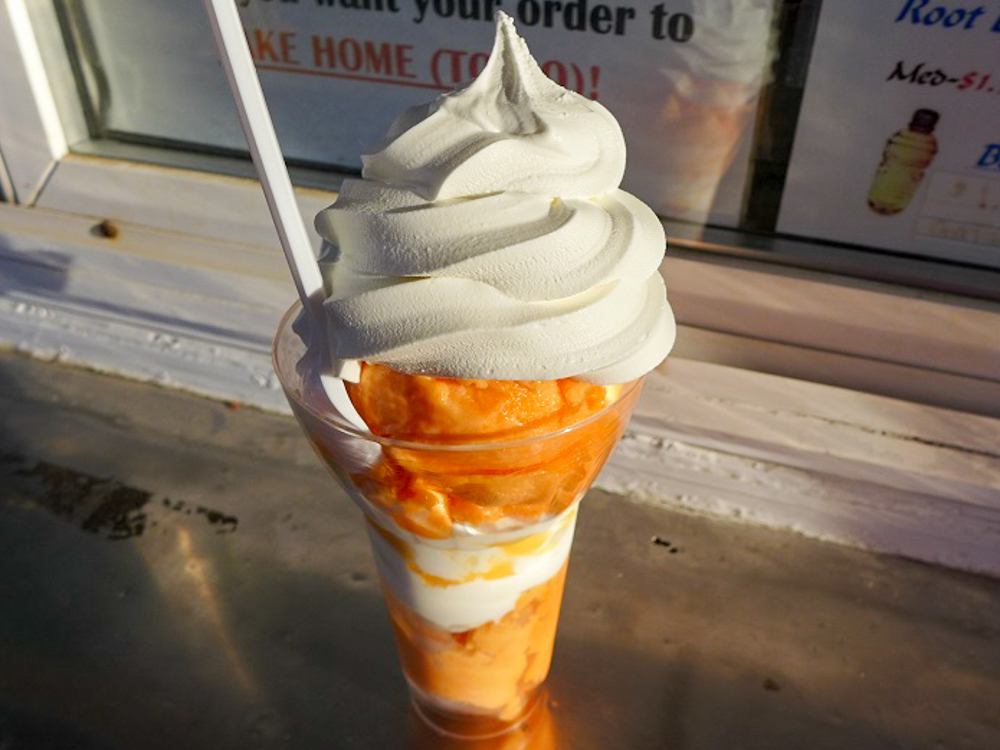 We sped into the setting sun on our way to Polar Bear Ice Cream (129 New Jersey 36, North Middletown, 732-787-2402), forced to overshoot the place by the crazy New Jersey roads, and navigate one of those often treacherous "jug handles." At the ice cream stand, which had a giant flaking ice cream cone on top, we had an appropriately artificial-tasting cherry dip cone, which we didn't finish, though we recognized the beauty of the concept. What we almost finished was something called Creamsicle Sundae, which featured orange sherbet alternating with layers of vanilla custard (well, OK, it was more like Dairy Queen), and the result was even better than a Creamsicle, and infectiously tasty.

And just like that, the day was over as we headed north on the Garden State.

Note: We wanted to try but didn't make it to several lauded stops including Nasto's in Newark, The Bent Spoon in Princeton, and Chef Cardoz's recommended Mark & Julie's in West Orange. But they're here on this handy map.

Copy Link
Hard to beat getting an ice cream at the entrance to a beach. Get a vanilla soft serve with rainbow sprinkles from the Lickety Split truck.

Copy Link
129 New Jersey 36
Long Branch, NJ 07740
Perfect for post-beach soft serve in an array of interesting parfaits. Go for the vanilla and orange sherbert, aka, the Creamsicle.

Copy Link
236 Jefferson St
Newark, NJ 01705
(973) 589-3333
(973) 589-3333
Visit Website
Founded in 1939 on Jefferson Street in Newark, Nasto's is now in its third generation of ownership by the same family. They do great ice creams and Italian ices, but even more distinguished are the Italian frozen specialties such as tartufo, spumoni, tortoni, and the kind of ice cream cake rolls you can't find elsewhere anymore.

Copy Link
35 Palmer Sq W
Princeton, NJ 08542
(609) 924-2368
(609) 924-2368
Visit Website
The Bent Spoon, which turned 10 this year, is the most new-fangled ice cream shop of the bunch, but no less worth a visit. Owners Gabrielle Carbone and Matt Errico specialize in super-seasonal, locally-sourced ice creams and sorbets in flavors like lavender mascarpone, ricotta pistachio, chocolate earl grey, and rhubarb. A tomato sorbet has even been known to pop up on the summer menu.

Sandy Hook, NJ 07732
Hard to beat getting an ice cream at the entrance to a beach. Get a vanilla soft serve with rainbow sprinkles from the Lickety Split truck.

236 Jefferson St, Newark, NJ 01705
Founded in 1939 on Jefferson Street in Newark, Nasto's is now in its third generation of ownership by the same family. They do great ice creams and Italian ices, but even more distinguished are the Italian frozen specialties such as tartufo, spumoni, tortoni, and the kind of ice cream cake rolls you can't find elsewhere anymore.
236 Jefferson St
Newark, NJ 01705
(973) 589-3333
Visit Website

35 Palmer Sq W, Princeton, NJ 08542
The Bent Spoon, which turned 10 this year, is the most new-fangled ice cream shop of the bunch, but no less worth a visit. Owners Gabrielle Carbone and Matt Errico specialize in super-seasonal, locally-sourced ice creams and sorbets in flavors like lavender mascarpone, ricotta pistachio, chocolate earl grey, and rhubarb. A tomato sorbet has even been known to pop up on the summer menu.
35 Palmer Sq W
Princeton, NJ 08542
(609) 924-2368
Visit Website