Share All sharing options for: For All Things Good Rocks Bed-Stuy With (Mostly) Meat-Free Tacos

Review and information for For All Things Good

Atole, a corn beverage that dates back to pre-Colombian times, “is the traditional accompaniment to tamales, for supper or breakfast, or to drink, thin and cold, as a refreshment in the daytime,” writes author Diana Kennedy in The Essential Cuisines of Mexico. “The subject is almost inexhaustible,” she adds, recounting a wildly diverse class of quaffable porridges, some spicy-sweet, others laced with fresh corn and wild anise, and still others flavored with orange flowers and fortified with cheese-stuffed balls of lard-enriched masa.

The drink, while ubiquitous in Mexico, can be tougher to find in New York. It hasn’t achieved the fame of, say, horchata, which is available at scores of taquerias and certain fancy establishments that spike it with rum and charge $19 for it. One will more reliably encounter great atole at street vendors and delis, which is what makes its presence a bit of a shock at For All Good Things in Bed-Stuy, a modern meat-lite Mexican spot where the brunch wait can hit 90 minutes and where the tacos are worthy of interborough travel.

The atole is pure luxury, an opulent essay in coarse textures. Consumed hot, the experience is akin to drinking melted ice cream. Cold, it’s like a frosty milkshake. It glides across the tongue and down the throat like a mouthful of thin Cream of Wheat. The aroma conveys the earthiness of liquefied popcorn tempered by a touch of sugar. If your palate is overwhelmed by a flauta — a cigar-shaped corn tortilla stuffed with salty, nutty, oily salsa macha and stretchy cheese — the restrained sweetness and vegetal perfumes of atole bring everything into relief.

Someone who’s never tried the beverage before might say it loosely recalls a more savory Cereal Milk, but the better way to describe it is: Atole simply tastes like atole.

From top: flautas with salsa macha; patrons relaxing in the outdoor dining area; Matt Diaz, co-owner at For All Things Good

For All Things Good, whose name serves as an anglophone hat tip to that famous Spanish drinking expression — “para todo mal, mezcal, para todo bien, tambien” — opened in late August as a molino, a tortilleria, and a daytime cafe serving light fare. It was not, by design, a taqueria or a proper restaurant. At least that was not the intent.

Like a proper molino, or mill, For All Things Good was — and is — a place where corn is nixtamalized and then ground with water to form masa and eventually, tortillas. First-time restaurateurs Matt Diaz and Carlos Macias explain this process and more in a mansplain-y albeit thoughtful 550-word column on their website, with multiple footnotes. They write about attending talks and seminars on maize over the past few years and selecting different “landraces of corn” in an effort to support sustainability and resist the very real problem of corn’s declining genetic diversity. Perhaps this is why For All Things Good refers to itself as a “boutique” molino, a term they might want to drop unless they have dreams of a co-sponsorship deal with an Ian Schrager hotel that features Aesop soaps and expensive candles.

Last week, For All Things Good also debuted a small tiendita, or corner shop, as is increasingly common among restaurants during the pandemic. It sells $3 avocados, $12 jars of salsa, $20 totes, and copies of a small book called Nixtamal.

As for the food, here’s how Diaz explained it during a phone interview: “We put the menu together as an idea of things to showcase that you could do with masa that weren’t tacos... really, the concept in the beginning was no tacos.” He said he envisioned an indoor cafe where people work on their laptops and get snacks, hiring the design team behind Gertie to create a light-filled space with a curved bar and cacti. But when they opened during the pandemic, cabin fever-afflicted patrons treated the corner spot more as an outdoor restaurant than a place to buy dough to make tortillas back at home. “We fucked up,” Diaz said of early days, when he realized he needed to “learn how to cook this stuff because everyone is coming for the food.”

The kitchen team indeed learned how to cook that stuff — memelas, quesadillas, tlayuditas, pozole, and chilaquiles — and added a taco menu quickly. That in itself is impressive: Diaz, the culinary director — a New Yorker of Irish-Puerto Rican descent — doesn’t have a cooking background; his experience is in enology and wine sales. Macias, his business partner, is from Mexico City and an architect by training.

I wasn’t there during the opening days, but For All Things Good seemed to know what it was doing during a lunch visit in early October, coaxing varying degrees of subtle yet nuanced flavors out of simple salsas and masa-based dishes. By later that month, the restaurant was putting out tacos that simultaneously felt appropriate for a great neighborhood bodega or a $120 tasting menu joint.

Consider kicking off a morning visit with a Oaxacan-style memela. Cooks form masa into oval-shaped boats, griddle them, then top the soft corn cakes with a smooth layer of avocado and an egg. The dish is a simple ode to nourishing squishiness. For a lighter meal, try the trio of tetelas: Diaz stuffs chipotles and hibiscus flowers into light red tortillas, which he then folds into cute little triangles for a spicy, smoky, pocket-sized snack; even better is the tan variety, filled with oozy cheese and limey salsa.

The tlayuditas, despite the fact that the kitchen garnishes them with the hefty abandon of dive bar nachos, boast a tight-rope walker’s sense of balance. A thin layer of coarse black beans mingles with ultra-creamy Oaxacan cheese, while a generous application of salsa macha — a mix of pepitas, sunflower seeds, and cascabel chiles — imparts a flavor profile that recalls black olives, anise, and the deep, dark flavor of fire-roasted nuts. On top of all that goes a scattering of heady, meaty maitake mushrooms. And of course, the crunchy tortilla packs the savory perfume of toasted corn. Every flavor comes through with crystal clarity.

As winter arrives, it’s likely that more folks will be ordering those tlayuditas for takeout or delivery. For All Things Good has no plans to divert from its outdoor-only service style, which involves patrons ordering at the counter, then waiting for the server — sometimes Diaz himself — to bring out everything. Or put more bluntly: There won’t be any indoor dining. “For us, it seems really risky. And why? To serve a couple of extra people, at the expense of the safety of our community and the people that work here? We don’t have investors. It’s not like we can afford to get sick and shut down. For us, the smart thing to do…. is to just not seat indoors,” Diaz said.

New York City currently allows indoor dining at 25 percent capacity; efforts to raise the limit to 50 percent appear to be on hold indefinitely as positive test rates appear set to creep past 3 percent and the daily average of new infections approaches 153,000 nationwide, roughly triple that same number from one month ago.

“Some people think you can do [indoors] safely,” Diaz said. “I’m not one of those people.”

“I wouldn’t say anything pushed us over the edge,” Diaz said when I asked him what led to the decision to put tacos on the menu. “Maybe we felt bad for shunning tacos so hard.” Aficionados should keep in mind, however, that these creations are, with one or two exceptions, only available at dinner. “We don’t have tacos on our daytime menu because we wanted people to really look at the menu and start to learn more than the usual suspects you find on a menu for Mexican food.”

For All Good Thing’s tacos, to be sure, are far from the usual suspects. In line with the venue’s vegetable-forward ethos, Diaz offers just a single meat variant: green chorizo. Crumbly sausage, laced with herbs, functions as a paean to cilantro in all its complexity. Some bites involve rich sausage checked by the vernal, verdant perfumes of tangy salsa verde; other bites let the oily meat come through more powerfully, with just a few herbal fronds teasing the palate with ripe grassiness.

Long bean tacos, in turn, are just that, verdant haricots verts that seem to glow in the dark from chile oil. The taco delivers a hit of corn, a few snaps of vegetable, and a long, tongue-stinging uppercut of morita chiles. And then there’s the majestic mushroom two ways: The kitchen slices king oyster fungi and cooks them to the slippery, jiggly texture of butter poached lobster. The taste is mild and easygoing until an unctuous paste of hen of the woods mushroom hits the palate, unleashing a gale of woodsy musk. Imagine a truffle-strewn forest after a fresh rain. Then, finally, the subtle and almost flinty punch of a warm, blue corn tortilla prepares the palate for more eating.

As things get colder, keep in mind that For All Things Good isn’t purchasing heat lamps for its seven outdoor tables. Diaz said that the restaurant is instead putting money toward a liquor license application; it might also debut a larger streetside seating area in the spring.

The lack of traditional comforts or indulgences — things that might encourage folks to linger — might not be the worst strategy as fall turns to winter. While COVID-19 cases tick up throughout the city, certain high-profile establishments are trying to make dining out as close to the pre-pandemic experience as possible for their moneyed clientele, with the only real disruption being the state requirement to wear a mask while walking to the restroom.

By contrast, a class of leaner and younger operators, be it the Thai Diner crew, the Bolivian Llama Party brothers, the Very Fresh Noodles guys, and the For All Good Things team are tweaking the business model of dining out to ensure that things are safer and fairer for their own staffers, even if it means making things a bit more inconvenient for customers. Sometimes that means ordering via QR codes. Sometimes it means outdoor-only dining. Sometimes it means takeout-only. Either way, these are the types of boundary-pushing venues that many seem more interested in patronizing than some generic Manhattan spot that continues to sell cod on nice plates for $39.

And really, a nice hot cup of atole will keep you warmer than a heat lamp.

Our review of For All Things Good 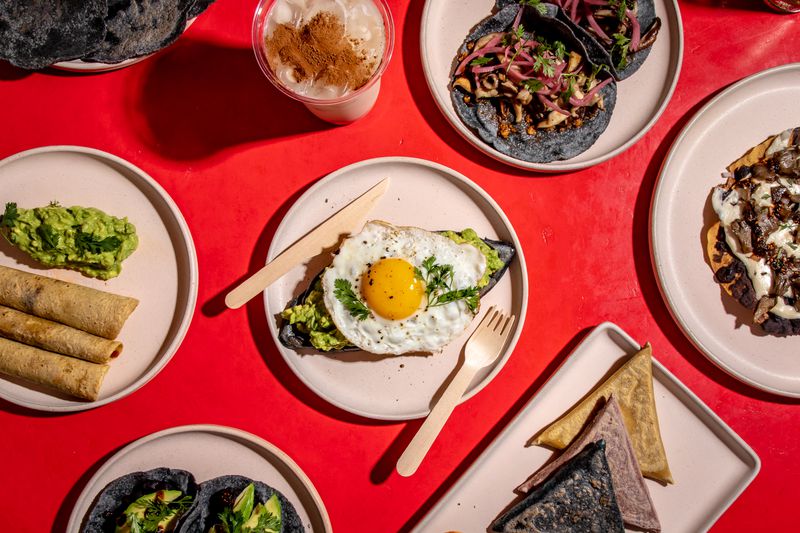 Bonus tip: Don’t sleep on the horchata. Just as the atole conveys the flavor of corn with bright clarity, the horchata expresses the clear essence of rice without too much sugar or cinnamon. Also consider purchasing masa for DIY tortillas at home.

For All Things Good