Fini is a great new pizzeria by a Lilia co-owner, but the prices highlight how local slice shops are battling with inflation

Review and information for Fini Pizza

Okay, so Fini is a neighborhood slice joint with lawn chairs out front (bring your uncle’s tank top), almond ices in the freezer, and a website that greets you with a slick video of a staffer in noise-canceling headphones walking the streets of Brooklyn in shiny custom swag. It’s a chill place to spend $25 on two Neapolitan-style cheese slices and an IPA because, hey, you can’t get a $49 burger with fries at a “Dimes Square” tavern every day.

One wouldn’t be faulted for dismissing such a boutique Williamsburg pizzeria altogether, calling it a product of the once bohemian area’s ongoing mallification — check out this Hermès store coming soon. Then again, anyone who drops by Fini for lunch knows that something quite tasty is happening here, albeit for $5 a slice — increasingly a standard fee for ambitious strains of pizza.

Sean Feeney, the finance guy behind Misi and Lilia — those white-hot Italian spots he runs with Missy Robbins — and Will Unseld, former chef de cuisine at Misi, haven’t just opened up yet another pizzeria. The duo, rather, has managed to add to the city’s ongoing slice renaissance with clever tweaks to classic staples, occasionally dotting their pies with smears of ‘nduja and showers of lemon zest.

Think of Fini as a neo-nostalgic ode to Brooklyn and Jersey pizza parlors with boxy letterboard menus, a color scheme that recalls a Sprite can, and homemade Orange Julius smoothies. Spoiler: The custom Julius lacks the drink’s signature creamsicle-style flavor, but that’s not why you’re here. You’ve come to Fini because it already shows signs of keeping pace with the city’s new guard slice shops, venues that often play around with natural fermentation techniques or creative toppings to riff on the tristate-area foodstuff.

Take the outstanding white slice ($5.25): Local pizzaioli typically cover the dough with gobs of ricotta and mozzarella, and maybe throw in a bit of broccoli rabe for color. Feeney and Unseld take a richer approach, smearing a creamy layer of parmesan-fontina over the mozz. The cheese oozes like nacho sauce and boasts the heady scents of fondue or Alfredo. Is it too much? It certainly is, until a scattering of citrus zest, also an unexpected touch, hits the reset button on your olfactory system. And if that’s not enough, you can squeeze a lemon wedge — included as a side — to tame the luscious creaminess.

Unseld also throws a curve ball with the tomato slice ($5). Instead of simply showing off Gustarosso tomatoes, as so many pizzerias do, he adds breadcrumbs. It’s a nice move that adds a bit of pleasant crunch while the fruit zings the palate with a good balance of earthy sweetness, chile-laced heat, and electric, riesling-like acidity.

Or here’s one for the traditionalists: Fini’s cheese slice, whose tomatoes and white splotches of mozz push it closer toward margherita territory, is an impressive new entrant to this vital category. Yet this is where the prices might start to sting. Two slices and a soda will cost nearly $14. Sure, that’s about two bucks less than a Diet coke and a grain bowl from Chop’t, but it’s still a tough price for scores of New Yorkers who look to slice pizza as a daily staple. And indeed, Fini is just one member of the spendy slice pizza club, a class of venues that are expanding in their ranks as beloved dollar slice shops become a critically endangered species.

The mean price of a cheese slice — which has historically kept pace with the cost of a subway ride — has shot up past that $2.75 fare peg, now averaging $3.06 in Brooklyn, or $3.26 in Manhattan, according to a Bloomberg News analysis. Even in this era of surging food prices, some of the key components of pizza have seen particularly notable hikes. Dairy and cheese prices are both up by sturdy amounts, as is flour — due in no small part to Russia’s unprovoked war against Ukraine, a massive grain exporter. Combine that all with rising hospitality wages and skyrocketing electricity bills and you have a perfect recipe for serious pizza inflation.

High-minded slices are even more of a luxury amid these price increases. Paying upwards of $5 after tax was a reality at Di Fara in 2009, a move that sparked citywide debates, but now that price is a fixture for basic meat-free slices at venues like Mama’s Too, Sullivan Street, Sauce, and elsewhere. Corner Slice’s Mike Bergmann, who charges $5.75 after tax for a superb margherita square, says his tomato costs have jumped 12 percent over the past year, while pecorino is up 24 percent, and pizza boxes, 23 percent. On that final note, the acclaimed L’Industrie in Williamsburg now charges $1 for take home boxes, as does Scarr’s on the Lower East Side.

Back to Fini’s cheese pizza, which costs $4.75, or $5.17 after tax. Unseld uses custom-milled spelt flour from Maine for a flavor profile that’s just a touch sweeter than some of the city’s naturally-leavened pizzas, which often boast tangier and more pleasantly chewy crusts. The low-moisture mozz flaunts a straightforward milkiness, while the pecorino-topped tomatoes add funk and tartness. It’s a very good pizza, packing a texture that sometimes yields quite easily to a bite — the lightness you expect from a cheaper slice shop — while sometimes showing off a slightly heartier chew.

A Sicilian square ($5.25) also turns out gorgeously; Fini paints the airy, toothsome crumb with a slick of tomato, a showering of shaved parm, and in a nod to classic Sicilian sfincione, a layer of breadcrumbs.

Italian ices riff on the longtime pizza parlor dessert, though some of them aim for more sophistication and clarity of flavor. That means none of the frozen delicacies sport a handsome blue hue, my artificial color of choice at most slice shops, and that also means the kitchen spins a coconut variety so densely one could pass it off as gelato. Better to stick with a lemon ice to help lighten up your carbohydrate-burdened stomach. For this you’ll pay $4 for a single fragrant scoop. That might seem spendy to some, but in a city where even soft serve can cost over $7 more, let’s call this ice what it is: a fine value.

Our review of Fini Pizza 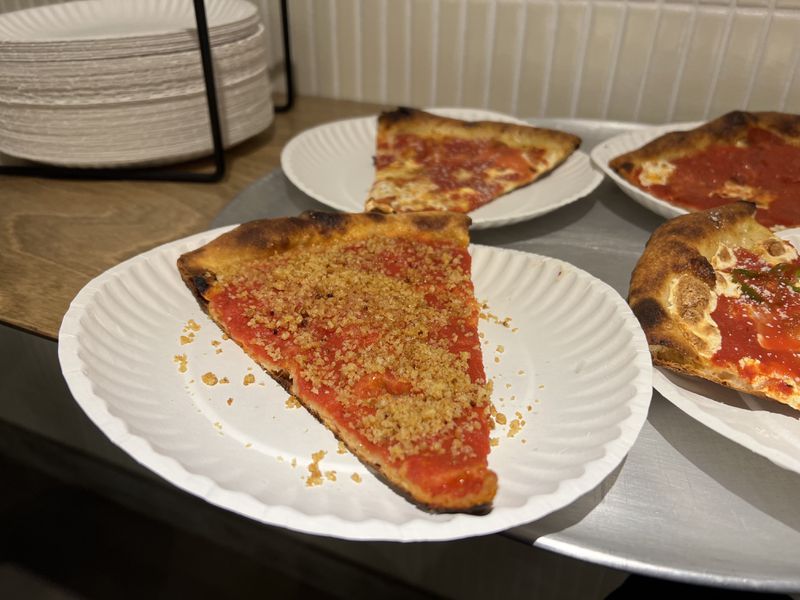 Bonus tip: Also consider nearby high-minded slice shops, including L’Industrie (slices starting at $3.63 including tax and credit card fee), Best Pizza ($4 for cheese slice), and the cafe at Leo ($4 margheritas).