Share All sharing options for: Manhattan’s Next Great Steakhouse Isn’t a Steakhouse

When it comes to steakhouses, there have always been too many choices — and yet in some ways, they’re largely the same. It’s like strolling into a cinema and realizing that nearly every movie is from Marvel Studios: Sure, the titles are different, but are they really?

While you might prefer one cut over another — a porterhouse for its heft, a rib-eye for its tenderness — that steak is surely going to be big, expensive, and predictable: the bovine equivalent of that interminable action sequence at the end of “Avengers: Endgame.”

Chef Ignacio Mattos, the force behind the boundary-pushing Estela on East Houston, doesn’t delude diners with mock choices. He’s given us — or those of us with deep pockets — Corner Bar at the Nine Orchard hotel, a voguish Lower East Side hangout that brings a bit of perspective to steak. While even modern brasseries and pubs sometimes offer three or more cuts with fairly obvious flavor profiles, Mattos serves a single slab of beef: an original, inimitable take on a classic steak au poivre.

A typical au poivre deploys a peppery sauce to enrich a lean filet or a muscular strip. The Mattos version instead doubles down on fats with an ultra-marbled wagyu skirt, grilled over smoky coals. A cook paints a white plate with a Worcestershire-laced demi-glace — so sticky you could use it to hang a large Jackson Pollock — before preslicing the meat to let it sop up all the richness. A waiter asks whether medium rare is a good temperature, and then replies with a wink that medium rare is the only temperature here. This isn’t steak as fan service, giving diners what they think they want in myriad forms. This is steak as a singular, stellar, take-it-or-leave-it vision.

If you’re seeking out a stunner of a steakhouse meal this fall — at a hip new spot that’s not quite a steakhouse — Corner Bar is it, for that au poivre, for sides of mornay-slicked spinach, for fat slices of tomato so green and yellow they appear to be lit by neon gas. Just understand that prices are so eye-popping they almost feel like a New Yorker cartoon parody of what a meal should cost. The tomato salad costs more than good burgers, the burger with fries is priced like a steak, and a three-course steak frites meal will run about $185 for one.

From top, right: Patrons dining outside; diners drinking martinis at the bar; a patron instagramming their scallop.

Mattos isn’t here to direct a stereotypical Hollywood flick, but rather participate in an unintentionally satirical one. The only thing truly predictable about Corner Bar is that it actually is a corner bar, with a long marble counter dominating the narrow, rectangular space. But it’s not anything close to a neighborhood watering hole. Here, cool kids in shoulderless tops and sports jerseys layered underneath sports jackets eat steak tartare and sip on mezcal watermelon highballs. Once upon a time, certain New Yorkers started wryly referring to this skateboard-friendly, Chinatown-adjacent neighborhood as Dimes Square — because why wouldn’t real estate agents start referring to a historic section of Manhattan after an acai bowl cafe and its hot patrons? — but the name caught on (of course it did). So when a publication like Vogue covers the opening of Nine Orchard and Corner Bar, it unironically uses the name Dimes Square, as if this fictional place has been here since the beginning of time.

There are almost as many meta-levels to Corner Bar as there are to the fake name neighborhood. The space, with its plaid window curtains and aromas of shucked oysters, takes its cues from steak-and-shellfish-centric bistros. But it also reinterprets those tavern tropes through the prism of a chef who wishes P.J. Clarke’s were an opulent establishment where only a certain class of moneyed folks could afford to dine on a regular basis.

Some might balk at the prospect of a high profile chef upscaling what have always been accessible dishes, but Mattos and chef de cuisine Vincent D’Ambrosio do not simply hike the prices and add caviar. They put in the work. Take the humble scallop: Corner Bar douses the mollusk in so much caper butter sauce the flavor is closer to toffee candy than shellfish. Then Mattos makes things just a bit weirder, placing a slice of the scallop’s own soft red roe next to it. It looks like blood sausage and tastes just a bit like monkfish liver, wobbly and soft. Some bites are neutral in flavor; others are powerful enough to make the space around you smell like a fresh mackerel harvest.

Mattos has long had a knack for subverting and surprising, particularly with beef, a prized staple of his native Uruguay. At the Italian-leaning Altro Paradiso, the chef once served beef carpaccio that walked and talked like a regular carpaccio until you sliced through the flesh and realized it sat atop a nest of crisp potato chips — for salt and texture. At Estela, he would pair the menu’s only steak with powerfully funky taleggio sauce.

At Corner Bar, the chef’s sleights of hand are particularly meaningful when he nods to steakhouse fare. Mattos serves up some of the biggest, thickest slices of tomato outside of Peter Luger; some of them boast the circumference of a small plate. The well-salted fruit comes from red, yellow, and green heirlooms, some of them pulpy, others as firm as nectarines, all of them doused in just enough Thai chile vinegar and lemon juice to counteract the late-season sugars. Shards of mint and lovage in turn impart grassy garden aromas to this car-strewn swath of the city.

Yes, there is the de rigueur shrimp cocktail, normally a breezy indulgence, and indeed that’s the case here with the $35 version. Cooks clean and steam Caledonian blue prawns until they’re mild enough — some might say bland enough — to be dipped into cocktail sauce. But those who opt for the $85 shellfish platter, with plump oysters and styrofoam-flavored lobster, will encounter something more regal. Here, the shrimp are head-on. That’s admittedly a common touch for, say, warm langoustines, but when you chill a crustacean like this, their otherwise oozy brains start to congeal. That means when you suck on the skull, and you should, you slurp up a sweet and gritty paste, a gush of maritime offal.

Keep in mind that pretty much everything is aggressively a la carte, like at any proper steakhouse. That means a fairly run-of-the-mill tavern burger, nicely rare — the diner doesn’t have a say in the temperature — is just a burger on a plate. Add on fries and you’re at $50 after tax and tip. Mussels only come with a slab of sourdough wheat brioche. They’re good mussels though, big and plump and packing a buttery liquor so rich and briny it could double as a light chowder. And as a bonus, you’ll be able to complain to your friends that you spent $60 on moule frites if you supplement with spuds. Is griping about wicked inflation — or, let’s be honest, absurdly priced dishes no matter the state of the economy — not a very 2022 vibe?

Still, it’s hard to compete with that steak ($48). Executive sous chef Ethan Bensal, the brains behind the sauce, forges part of the au poivre sauce from a calf’s foot, letting the gelatin impart an intensely sticky texture. The kitchen supplies such a generous supply of demi-glace that one wonders whether Mattos got the ratio requirements from a drenched open-faced turkey sandwich. The beef itself sports a soft texture and hint of iron, while the sauce supersizes the smoky, beefy, sweet flavors. And then peppercorns — seven different kinds — jolt the palate like little flavor grenades.

After such richness, a twirl of sorbet is the right way to finish things off. Mattos pipes the creation like soft serve and serves it in an old-timey steel chalice. Earlier in the summer, the chefs used fresh cantaloupe, but they’ve since moved on to honeydew. The pale green treat cools the plate with fragrant, tropical aromas, while strategic doses of salt and cilantro keep the sweetness in check. Part of me wishes Mattos put both melon flavors into a clear plastic container as an ode to bodega fruit cups, like an edible Dimes Square art project, but perhaps that would’ve been too much. Simply charging $14 for sorbet at the end of a meal is enough of a stretch, and since I will happily pay that price, I guess I’ve partly bought into the guise of this neighborhood, appreciating it as if it were a real-life Christopher Guest mockumentary. Then again, one could make the same argument for broad swaths of Manhattan and Brooklyn too.

Our review of Corner Bar [NYC] 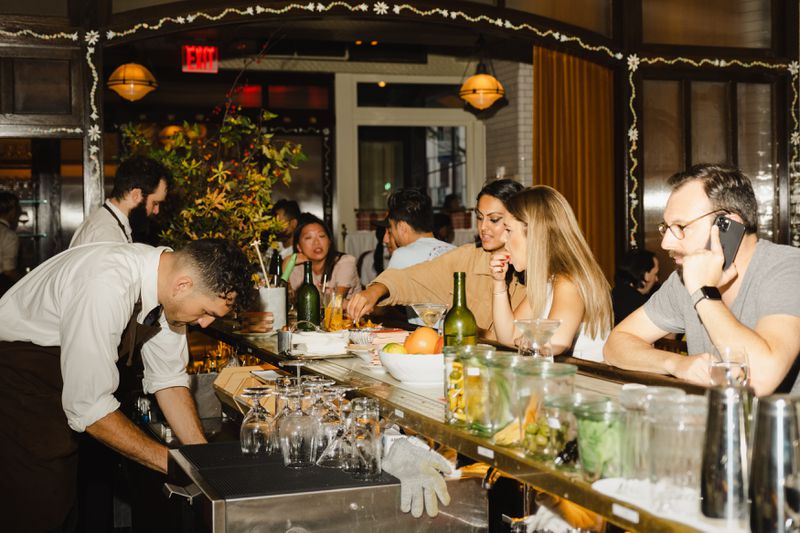 Bonus tip: Don’t miss the bone-in $85 Dover sole if it’s available as a special. Also take note that Corner Bar offers breakfast (including an assortment of pastries) and lunch (there’s a $19 BLT).