Review and information for Mel's

Dining at a modern New York-area pizzeria isn’t just about enjoying one of the region’s most accessible pleasures. It’s about bearing witness to seriously spectacular breadmaking. Skilled pizzaiolos turn out such striking products — from the feathery pies at L’Industrie to the glorious crumb at Corner Slice — that some patrons reach for a new vocabulary to сonvey the experience. Discussions of cold fermentation, pizza anatomy, and regional styles can practically evoke wine writing in their specificity and exuberance. Some of the language is ridiculous — “leoparding,” “underskirt” — but most of the terms are important for a very specific reason: they allow for more precise descriptions of the beloved yet frequently undervalued pleasures of pizzamaking.

I mention all this because if you’re at the wood-fired Mel’s on the western edge of Chelsea, you won’t find yourself racking the thesaurus for new pizza-based adjectives. You’ll instead declare: “Hey, this is a pretty good seafood pie,” before taking another sip of that IPA.

Things are simpler here. Mel’s isn’t where you go to experience the apotheosis of artisanal Neapolitan or Roman baking. This is where you go for hot clams, cold beer, good pizza heaped with great toppings, and what might be the city’s greatest selection of ice cream sundaes. If the modern pizzeria is often an altar to a singular, excellent product, Mel’s, by chef Melissa Rodriguez and Jeff Katz, is an expensive ode to a lowkey neighborhood pizzeria.

It’s also the duo’s first revamp of a troubled space. Last week, Rodriguez opened Al Coro next door, the fancy sequel to Del Posto, a posh Italian spot where she and Katz worked for over a decade — and whose longtime owner was disgraced chef Mario Batali (multiple staffers reported degrading comments toward women and inappropriate touching at that venue). Mel’s is located in the original John Dory space, co-owned by Ken Friedman, the restaurateur later accused of assault by multiple women. The first John Dory closed in 2009, later making way part of Del Posto’s private dining area.

Here’s what you need to know about the pies at Mel’s: The dough is fine. The outer rim gently crunches and crackles; the inner crust, in turn, is thin enough to get out of the way of the toppings, yet sturdy enough to prevent a soggy bottom. More often than not, the oven blackens too much of the dough, leaving a harsh, bitter sting. But mostly you bite into the pizza then quickly forget about it.

What you won’t forget about, however, are the garnishes. Eating Mel’s amatriciana-style pie isn’t about falling in love with the crust; it’s about wolfing down slices of guanciale so thin they seem to dissolve like cotton candy. An ample pool of tomatoes, laced with pecorino, provide even more umami. You won’t spend too much time meditating upon the good, everyday mozzarella in the sopressata pie, but you’ll surely fall in love with the sausage, distinguished as much by its restrained saltiness as its nuttiness. A mushroom pie is an ode to earthy maitake mushrooms, while a frutti di mare option turns bits of octopus, shrimp, and scallops into little nuggets of brine and sugar on a tomato pie.

Choose where you sit wisely at Mel’s. A dark, generic dining room in the back is all hard surfaces and ear-piercing din. Instead, ask for a seat at the long chef’s counter to watch cooks hoist steaks over dancing flames. Or request a spot near the end of the bar; there, you might be treated to a sweet oceanic aroma as a staffer torches shrimp. The crustaceans pack a wallop of the sea and a silky, medium-rare texture; scatterings of mint and parsley lend notes of sweetness and bitterness. A single giant baked clam flaunts even more powerful shoreline perfumes — more so than this normally bland fish shack staple usually does. The chopped cherrystones, surf clams, shrimp, and breadcrumbs, stuffed into a souvenir-sized shell, produce an aroma that’s a dead ringer for hot sand tinged by salt air. Each bite is pleasantly coarse at first, before turning soft and buttery. It’s a baked bivalve like no other.

If pizzamaking has ascended to the status of a widely studied and respected craft in our larger culinary universe, sundae slinging doesn’t yet boast the same cachet. Indeed, mixing a handful of Reese’s pieces onto a fudge-slathered scoop of Rocky Road typically involves less high-wire manipulation than working with naturally leavened dough. But when pastry chef and fellow Del Posto alum Georgia Wodder steps up to the plate at Mel’s, she reminds us that a proper sundae, by virtue of technique and curation, can rise to gustatory levels that simple ice cream could never achieve.

Wodder churns a mint chip gelato that goes easy on the sweetness and strong on the namesake herb; imagine the flavor of fresh grass cut with menthol. Then she doubles down on the chocolate with a rich, dense brownie at the bottom of the glass. She also laces the clean milkiness of fior di latte gelato with olive oil and sea salt. The flavor is simultaneously fruity and creamy, like a plate of good burrata, except with toffee at the bottom. And with mascarpone gelato, the power of clean dairy comes across even more strongly, as if condensed into a demi-glace. Wodder shaves tricolore cookies on top as if they were truffles, checking the tangy ice cream with a sweet almond punch. There is surely no greater sundae in all of New York.

If these pizzas and desserts channel visions of affordable Friday night dinners in the suburbs, keep in mind that this nostalgia comes with a “chic-dining” tax of sorts. A modest dinner for two at Mel’s — an appetizer, two shared pizzas, a single sundae and two drinks each — can easily hit $190 after tax and tip. Part of that equation is surely inflation, but part of it is the fact that few people are running a pizzeria like Rodriguez and Wodder.

Our review of Mel's 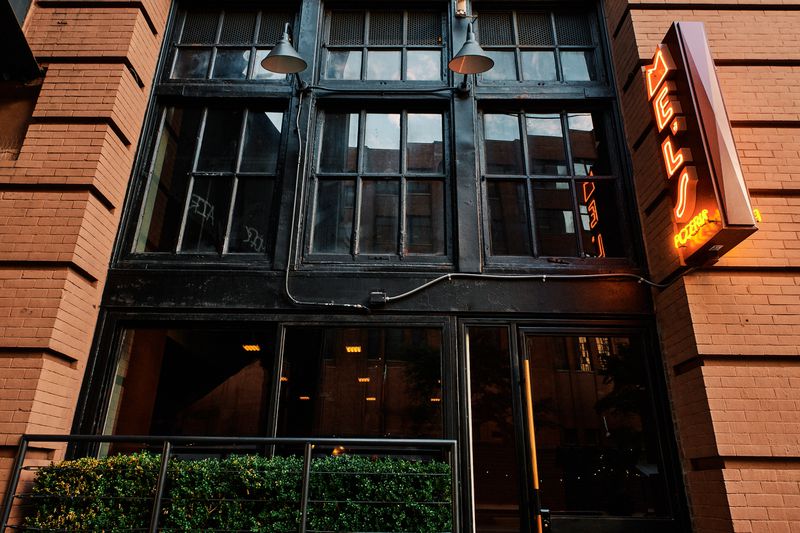 Bonus tip: To add a bit of extra flavor to the crust, consider any one of Mel’s dunking sauces, including salsa verde, pesto, parmigano fonduta, and an Italian-ish riff on chile crisp. They’re $6 apiece or three for $12.

A Ritzy Tavern Doubling as an Art Gallery Opens in Tribeca