Review and information for Mari

Should you ever book a dinner date at one of New York’s top-tier omakase parlors — where a night out can equal a few months’ worth of student loan payments — you will surely encounter the predictable luxury that is bluefin tuna, served in multiple, formulaic ways.

The resident sushi chef will likely send out a parade of tuna preparations throughout the meal: a crimson slice of lean akami; maybe a cut of otoro as marbled as rib-eye; and seared toro jaw, as expressive of jiggly fats as a slab of wagyu. And the kitchen might even throw in a tartare — chopped toro temaki with scallions. This obligatory tuna setup is delicious but tiring; imagine showing up at literally any tasting menu spot and having to plow through, say, four or five steak courses in exchange for enjoying everything else.

Chef Sungchul Shim’s Mari in Hell’s Kitchen takes a less exorbitant and more interesting approach to the omakase experience. The restaurant charges $135 for a tasting of hand rolls, just one of which contains tuna. Shim eschews bluefin for more sustainable bigeye, poaching it in garlic oil and lacing it with gochujang. He layers the fish over rice, wraps it in a tote of crisp nori, and tops it off with crispy potato threads. The confit tuna dissolves on the tongue, flaunting a subtle oceanic pop, while the chiles add a serious sting. It is a spicy tuna roll like no other, blending the texture of foie gras with the simple flavors of a good tuna salad sandwich.

It’s so good I ordered a second one during my last visit. The supplemental charge was just $6.

Shim, who made his solo debut with skewer spot Kochi a few blocks away, is now showing diners what a hand roll tasting would look like if it adopted a modern Korean bent. He tops tiny shrimp with seaweed puree. He marinates wagyu in a sweet galbi marinade. And he douses his rice with sesame oil, leaving the grains with an aromatic and nutty perfume. Shim is effectively using Japanese temaki as a loose framework for reimaging kimbap, those rice rolls normally cut into circular slices and sold at everyday K-Town lunch spots.

Rest assured, Mari’s luxe seafood DNA notwithstanding — Shim cut his teeth at Le Bernardin and Neta (RIP) — this isn’t yet another reverent omakase temple. Instead of a peaceful room with hushed servers, bartenders shake cocktails while patrons pack the foyer and practically spill out of the door; it’s a vibe that jibes with this bustling stretch of Ninth Avenue. Instead of a single hinoki bar with most patrons facing the revered chefs, a square counter lets you observe the cooks grilling wagyu over coals while you spy on dates across the room making quick work of their sool pairings.

Not too long after dinner begins, the kitchen sends out a particularly silky riff on gyeran-jjim, the souffle-like egg custard frequently served at tabletop barbecue spots. Mari adds a dollop of chile-laced seafood broth to the eggs, turning what would otherwise be a neutral starter into a spicy and briny amuse. If most fancy venues like to prime the palate gently, often with caviar, Mari does it by shocking the tongue with wicked heat.

Then the rolls start showing up — as does the fish roe. Golden osetra adds a punch of salinity to bland king salmon, saving that early course from monotony. Much better is the following: scallops dressed with makgeolli vinaigrette and garnished with candied anchovies. The mollusks, fortified by the rice wine, act as a gently sweet counterpoint to the chewy, salty fish. The rice dampens the brine a touch — albeit without the puckery notes some might expect in a hand roll.

A bit of explanation: Shim seasons his grains with salt, sesame seeds, sesame oil, and pickled daikon, but he omits sushi-style vinegar. “We made a deliberate choice not to add vinegar to our rice to keep the flavor of the hand rolls as traditionally Korean as possible,” the chef tells me. The acidity levels, accordingly, are much lower than at a Japanese omakase spot.

The rolls never come across as unbalanced, however. The chef takes slices of mackerel, passes them under a blowtorch, then anoints them with a dollop of black vinegar jelly. Each bite of mackerel is strongly smoky and oily — until the quivering condiment shows up to tame things with an uppercut of tartness. It is a majestic bite. Or for galbi-marinated A5 wagyu, wobbly with heady beef fats and packing delicate sugars, Shim adds a few marinated onions, evoking the sensation of a good burger with pickles.

And in case anyone is wondering: The nori here is brilliantly textured. Biting into the seaweed produces the same pleasing auditory sensation as slicing through wrapping paper with scissors.

For those who’d like a touch more tuna, consider asking for a $14 add-on to the menu. The optional course employs bigeye as a savory background note to Santa Barbara sea urchin, which hits the palate with a sugary creaminess. Shim tells me that the roll constitutes a “conscientious decision to highlight the uni and downplay tuna as a main ingredient,” adding that uncooked tuna is “not a staple in Korean cuisine.”

You cleanse your palate not with slices of ginger, incidentally, but with a plate of pickled celery, sunchokes, and other vegetables; you can also add them onto the rolls for extra tang and crunch.

A chic sushi dinner might conclude shortly after the nigiri or hand rolls. Shim will have none of that. He forges a guksu by simmering pork, beef, and chicken stock for 36 hours, portioning it in such a way that it could qualify as a small main at an a la carte restaurant. His broth is gently cloudy, but not quite as rich as, say, a Japanese-style tonkotsu. The pale yellow liquid gives off a whisper of poultry perfume while imparting a salty roundness. A skein of soft wheat noodles stretch and bounce as you chomp down on them, while a small mound of spicy gochujang stains the broth with its rusty hue. After that comes dessert: a small round cake stuffed with black sesame marshmallow, a chic take on a Korean convenience-store classic.

Perhaps Mari’s innovative sensibilities seem familiar for New York’s modern Korean restaurants, or maybe even just for Shim. They should. Before the pandemic, New York’s high-end skewer scene was dominated by Japanese venues hawking minimally adorned yet extraordinarily tasty chicken parts. Then Shim showed up with Kochi, where he’d go on to pair charcoal-grilled meats with luxuriant remoulades, ramp chimichurris, and cashew ssamjangs. Now he’s taking a similar tack with Mari’s creative interpretation of kimbap, shining an upscale light on the typically casual foodstuff in the most meaningful way since David Chang and Eunjo Park’s late, lamented Kawi.

I’d happily drop by Mari on a weeknight for these indulgences, and that bowl of noodle soup, just as one can swing by Nami Nori in the West Village for creative, expert temaki. That’s not possible here, alas, due to the prix fixe style of dining. Shim tells me he struggled for months over the decision to go forward with an omakase, ultimately opting for that format to guarantee his tony take on a full kimbap meal. He also admits the single set menu is easier operationally — everyone gets the same thing — a fair statement in a world of skyrocketing food costs. And quite frankly, there’s something satisfying about knowing that Mari’s epic bite of spicy tuna isn’t an everyday commodity, like the ubiquitous chamchi roll it’s modeled after, but rather a special occasion luxury.

Our review of Mari 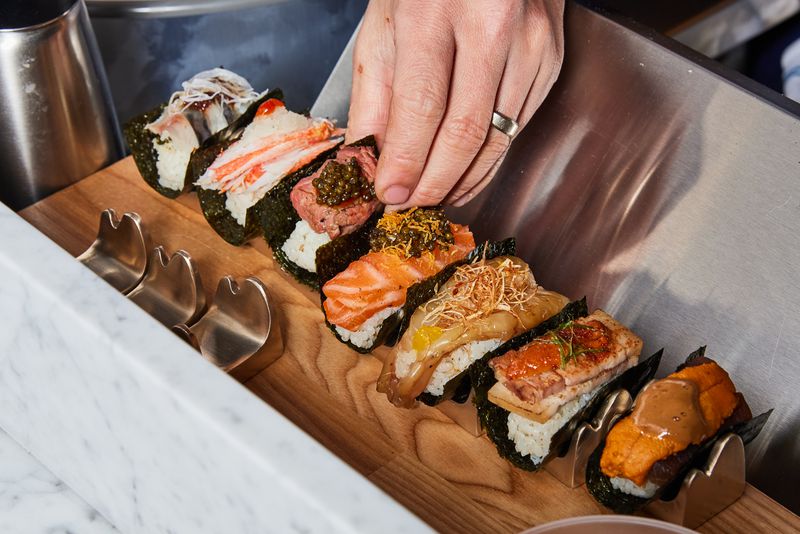 Bonus tip: In additional to supplemental rolls, diners can order repeat rolls before the soup course.