Share All sharing options for: It’s Never-Ending Fries and Lines at This $28 TikTok Steakhouse

Review and information for Skirt Steak

The brown paper placemat at Laurent Tourondel’s Skirt Steak in Midtown, one of the city’s most popular and affordable new bastions of beef, doubles as a menu — of sorts. Just four printed words appear on the sheet: greens, skirt steak, and fries. And that’s it; a 21-letter meal for $28. Never mind those sprawling steakhouses where dinner can run $150 and where handsome wood scaffolding looks pillaged from rare forests. Whoever designed Skirt Steak seemingly used the type of generic blonde planks typically found at Home Depot; one could legitimately call the design ethos “under construction.” It’s a bare-bones feast in a bare-bones space.

Frugality is the mindset here — to an extent. Draft beers are $10. A rye Manhattan can run $18. Staffers ask if you’d like to upgrade to a fancier wagyu cut for $58 (the correct answer is “no”). If you state you’re a vegetarian, someone might offer you an off-menu steamed and seared cauliflower steak; I have never seen a single person order one. If you are here at Skirt Steak, you are here to eat meat, so while I’m happy to report that the salad greens are crisp and that the fries are unlimited, the more important news is that the the steak is powerfully gamy, the type of cut that would make a dry-aged duck seem tame. And that’s a point worth dwelling upon for a minute: The single steak at this people’s steakhouse might not be to everyone’s liking.

Skirt steak is a bold choice for a menu focused around a single-item, the equivalent of an oyster bar only hawking crab innards or a vegan joint specializing in fermented broccoli rabe. Yes, the standard steak on an NYC menu — a strip, filet, or rib-eye — might make your gums tingle with warm blood or soft fats. Dry-aging might lend a brief, intoxicating funk. And careful broiling might bring out the type of heady aromas that can fill an entire room. But even though a classic New York chophouse steak is a study in excess, its core beefy flavors are suburban and restrained. Lamb or kidneys, it is not.

A skirt steak is different. Some folks classify it as offal, a larger class of meat that includes brains, lungs, and tripe. It is cut from the cow’s diaphragm and is covered in fibrous sheath. Raw, the full steak is about 3 inches wide and 2 feet long; it looks like a deflated fire hose. If you encounter it at Empanada Mama or Guantanamera, it will likely sport a garlicky marinade or bright chimichurri to keep the meaty flavors in check. At a Euro-leaning spot, the kitchen might offer it as a cheaper alternative to a pricier cut — and finish it off with a pat of herby butter to soften the punch.

Here in this 29th Street space, however, chef Tourondel, late of the BLT empire, serves the skirt in such a way to emphasize its feral perfume. It’s a cut that can make organ-y French pates taste mild by comparison. Or as I like to put it, it’s a steak that actually tastes like steak. This is a good thing.

During each of my visits, the skirt boasted a gently burnished exterior and a tender interior. Dredge a slice across the greasy, cast-iron skillet and it might exhibit the type of concentrated beefiness characteristic of a griddled hamburger. With other bites, the salt levels come through quite aggressively, while the chemical sting of the gas broiler peeks through. But as you chew, the signature mineral flavor of the skirt always reveals itself with clarity; low-level notes of liver linger on the plate for a good minute or two. A rep for the restaurant tells me they use a marinade, though I’d say it tastes as if they’re letting this skirt steak soak in the juices of other skirt steaks. A side of black pepper bearnaise helps tamp down the iodine punch.

It’s not necessarily the type of steak most people would want to eat every day; then again, I’d counter that steak is not the type of thing we should be eating every day. There’s also something nice about enjoying a modest portion of beef with a rich, iron-y finish rather than an unwieldy cut that has all the flavor of textured ocean water — as is the case at so many steakhouses. The wagyu steak, incidentally, was virtually indistinguishable from the cheaper cut.

As for the rest of the meal, it’s good enough. The Boston bibb lettuce salad, loaded with fragrant dill and lemony mustard vinaigrette, wouldn’t feel out of place at a good Parisian neo-bistro. The free bread — and $10 garlic bread — is worth leaving on the table or feeding to the neighborhood birds. The fries are golden and slightly limp. You eat them not so much for pure potato flavor as you do for starchy relief from the steak. Those who opt for dessert, a $10 supplement, can choose classic confections like a Paris-Brest, chocolate cake, and a particularly buttery and flaky raspberry tart.

Skirt Steak’s prix fixe style of dining takes a strong cue from Le Relais de Venise, a Paris-based steakhouse that’s been fixing up hungry patrons with plates of dressed lettuce and sliced entrecote for quite some time. But since the New York location of Relais remains temporarily shuttered, Skirt Steak appears ready to assume the city’s official cheap steakhouse title. The venue’s name is hyperfunctional and SEO-optimized; the price is literally etched into the front window. And improbably, a TikTok review of the venue — set to a creepy version of “I Got 5 on It” from a horror film about social inequality — has garnered nearly 6 million views. The New York Post called it the city’s best steak deal.

The price, at $28, is particularly compelling in an era when a good steakhouse steak will easily run more than twice as much after sauce and sides, a reality fueled in part by the fact that beef prices alone have risen 16 percent over the past year. Skirt Steak maintains its accessibility through high turnover — it accommodates up to 500 diners every day — and eight-ounce portions. The no-reservations policy, a boon to diners who don’t like to plan their beef dinners a month out, can reportedly result in lengthy waits, but I’ve generally secured entry in under 15 minutes when dining after 9 p.m. The logical result of all this is a packed house that more accurately represents the swath of New York’s diverse populace than a clubby restaurant hawking $72 strips.

One last thing: If waiting in line outside isn’t for you, keep in mind that a $30 steak platter isn’t a statistical rarity — at least not outside the realm of European-American chophouses. You can walk into a good Colombian diner any day of the week for a fine skirt steak bandeja paisa platter. The nice thing about the city’s Latin American spots is that they already know New Yorkers appreciate an affordable steak that isn’t the size of a teenage anaconda. They simply serve those cuts as part of longer all-day menus. Those everyday institutions don’t make a big deal out of it and they surely don’t benefit from viral TikToks. They simply serve the community. And that’s the funny thing about Skirt Steak. It is, from a marketing point of view, a budget-friendly miracle of a steakhouse. But from a more practical standpoint, it feels like a business school project that puts a fancy spin on what so many neighborhood restaurants already do so well.

Our review of Skirt Steak 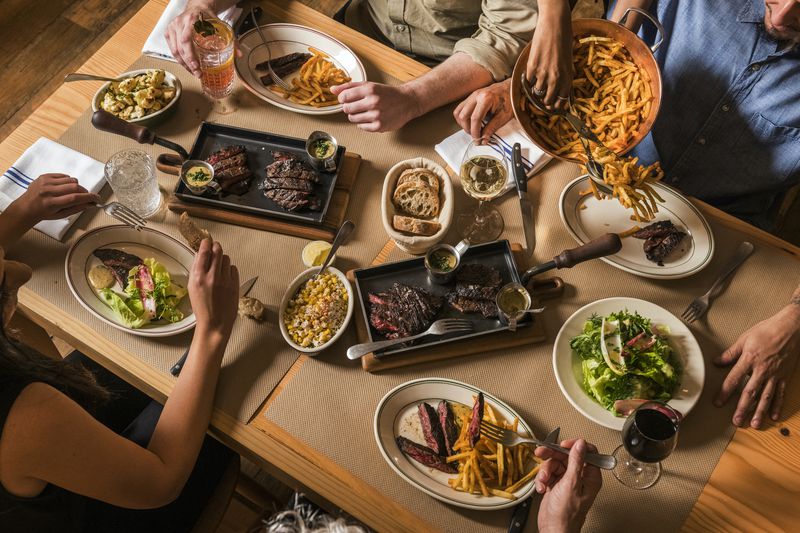 Cost: $28 for a set menu of salad, fries, bread, and skirt steak. Wagyu skirt steak is $58. Optional seasonal sides or desserts are $10 each.

Bonus tip: Come late to avoid the wait, or swing by at lunch. Keep in mind that Skirt Steak is closed on Tuesdays.

How to Get Into the Restaurant You Can’t Get Into