Share All sharing options for: Joomak’s Sweet-Savory Hits Make It One of NYC’s Top Tastings Under $150

At Joomak Banjum in Koreatown, a whimsical little tasting menu spot run by a pair of pastry chefs, the unconventional caviar starter could pretty much double as a dessert course. To call this uncommon would be an understatement. Restaurants sometimes serve the fish roe by itself with minimal accoutrements, as one would with oysters, to let the pure flavors of the sea come through. Or they’ll pair the expensive eggs with ingredients that amp up their natural umami or salt levels, be it butter, crab, hollandaise, or even potato chips. Sugar doesn’t typically enter into the equation in any obvious way. But maybe it should.

For a first course, the kitchen arranges a thin layer of golden osetra over a sweet dill custard, before topping it off with dots of yuzu cream and sliced cornichons. The vernal aromas of the herbs hit you first, followed by the brightness of the citrus and the crunch of the cucumbers. Sugar levels rise higher with the pudding, but before things can get anywhere near cloying, the caviar shows up with its luscious savoriness and delicate saline kick to keep things in check. It is as balanced as fleur de sel over caramel. Or think of it this way: One of the reasons Russian blini pair so well with caviar is that the light sugars in the pancake offset the salty roe. Joomak’s freewheeling combination abides by the spirit of that subtly sweet-salty pairing in its own modernist and creative way.

Nominally, Joomak is a modern Korean spot with occasional Chinese flair, a place to enjoy a four- ($95), nine- ($170), or 11-course ($225) “studio” menu. More practically, however, this is the type of wonderful thing that happens when you let two excellent dessert chefs run the show, blurring the lines between sweet and savory perhaps more studiously than any other contemporary New York tasting menu restaurant since the late, lamented Tailor. Imagine: raw fluke drenched in frothy passionfruit fizz, galbi duck paired with a sugar-dusted doughnut, or a potato dessert with raclette ice cream.

Joomak is the fine work of executive chef Jiho Kim, who used to run the desserts program at the Modern, and Kelly Nam, who was once responsible for the quietly spectacular sweets at Electric Lemon. Together, the duo ran a series of sold-out pop-ups earlier on in the pandemic in a K-Town karaoke bar, where they sold sugary mandu dumplings and doled out brown-butter cookie dough. Now they occupy a permanent space on 32nd Street and Fifth Avenue, a quiet rectangle of a room with blond tables and booths up front and two counters in the back. One of those bars, which overlooks the open pastry kitchen, hosts patrons ordering the studio menu. There, diners watch as Nam plates all the polychromatic desserts — including one with verdant peas — alongside fellow pastry chef and partner, Sarah Kang.

Both the long menu and the shorter prix fixe might begin with a bagel — sort of. A server places an amuse-bouche no larger than a large gumball on your table. This is an everything bagel meringue, with the speckled halves sandwiching a layer of smoked salmon and creme fraiche. The fish hits you with its rampant oils, while the crisp meringue brings down the richness with its sugars — a pairing that’s not very different from, say, the sweet miso on Nobu’s iconic cod dish.

A few minutes later a server might ferry over a bowl of wagyu beef tartare laced with buffalo mozzarella and tomato jam. For me, it was unmistakably bland on the first bite — but that’s because I neglected to add the accompanying seasoning packet. I ripped off the side of the orange pouch, only to watch it completely disintegrate; the packaging is actually made from dehydrated barbecue sauce. It adds, along with the togarashi hidden inside, a distinct saltiness, nuttiness, and yes, sweetness to the indulgent tartare. The dish now pops with flavor.

Joomak’s chefs cut their teeth at some of the city’s most high-profile, Euro-leaning restaurants, and the website emphasizes that French technique plays a strong role here. Hence, there is a stunner of a bouillabaisse, a slab of seared bass sitting atop a concentrated sauce bursting with notes of fish stock and gochujang. But still, one can better understand the larger ethos of this elegant institution against a decidedly different and more Asian-leaning backdrop. New York’s modern Korean restaurants have been booming for the past few years, opening at such a steady clip that they now represent the local vanguard of creatively-minded fine dining. The success of venues like Jua, Atomix, Cote, Atoboy — which can be quite difficult to get into — have paved the way for the current, newer crop of restaurants, which include Mari (hand roll omakases), Onjium (plated tastings at a car showroom), and now, Joomak. Rest assured, there will be more of these fine establishments.

What’s particularly nice about Joomak is that you can pretty much stroll in with little advance notice and enjoy a splendid four-course menu for about $130 after tax and tip. Those who order the studio menu can expect about everything Joomak has to offer; those who do the shorter option should be sure to sample the caviar (a supplemental fifth course for $45), as well as the cured fluke (no extra charge). Kim intersperses strips of the translucent flatfish in between thin green apple slices, and flanks that loose terrine with a generous swath of what he calls fizz — passionfruit juice and fish sauce carbonated and frothed up in a whipped cream canister. The apple acts in crisp, sweet relief to the gelatinous and neutral fish, while the fizz smacks the palate with tropical aromas and tartness.

Jajangmyeon, the classic Korean-Chinese noodle dish, typically involves a hearty and vaguely sweet sauce studded with pork. What you get at Joomak is quite different. Kim hides a pile of chewy, bouncy, sourdough noodles underneath a layer of foamy Comté sauce; it is a wonderful study in restrained tartness and cheese cave pungency. I’d bet it would sell out fast at any casual Italian or Korean spot.

And for galbi, typically made with short rib, Kim marinates and roasts a duck leg, slathering the gently gamey meat in sweet gochujang. At this point one might expect a side of foie or perhaps oven-roasted potatoes — but remember, Kim is a pastry chef, so he throws caution to the wind and pairs the fowl with a doughnut. He infuses the batter with duck stock and glazes it with jus. Diners dredge the rich cruller through the chile sauce and let the impossibly silky pate a choux dissolve on the tongue like warm chocolate.

Then the desserts begin. And by dessert I mean a layered potato mille-feuille — with a side of roasted raclette ice cream to cut through the starchiness and saltiness with refreshing funk. One of the most wild things about Joomak is that just as the caviar course could end the meal, the potato course could legitimately begin it. And quite frankly if the kitchen wholly inverted the order of the longer tasting, minus a tweak or two here and there, no one would leave disappointed. Or consider the coarse mousse of sweet peas with basil meringue, celery lime yogurt, and cilantro sable, a conveyance mechanism for the refreshing, herbal overtones of spring. It functions as a European-style after-dinner salad course, but it could just as easily work as a refreshing starter.

For something more straightforwardly sweet, try the passionfruit dessert, with aromatic curds kind of shaped like Minions and dotted with even sweeter guava paste. Usually passionfruit has enough acidity to zing the tongue, but here, a literal popping sensation occurs. That’s because Nam deploys homemade Pop Rocks for a persistently audible crackle. I can’t wait for her to figure out a way to add them to an appetizer. 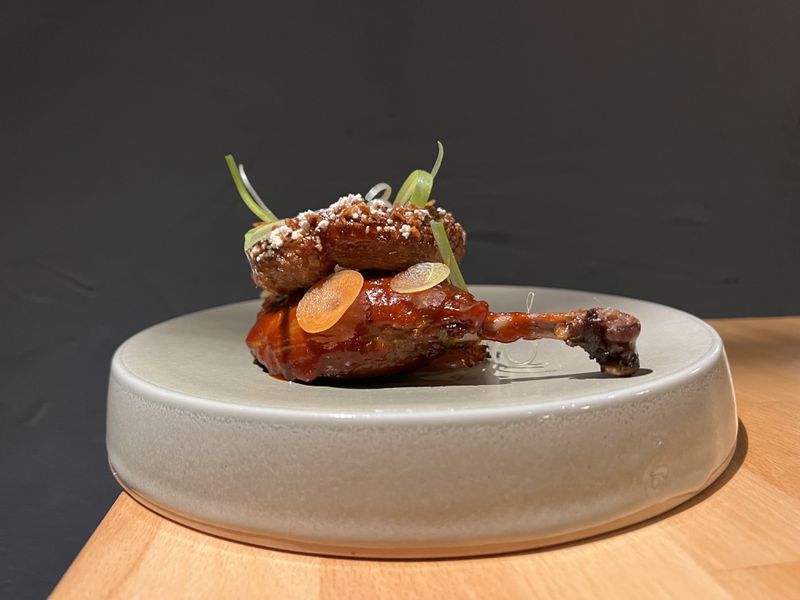 Cost: $95 for four courses with choices; $170 for the tasting; $225 for the longer studio tasting. Expect to spend at least $180 per person or thereabouts after wine, tax, and tip.