Share All sharing options for: A Bed-Stuy Slice Shop Is Shaking Up Brooklyn’s Pizza Scene With Electric Oxtail Pies

Review and information for Cuts & Slices

Last October, the sole owner of a Trinidadian-leaning pizza parlor in Bed-Stuy conjured up the type of social media magic you’d expect from a high-powered publicity firm.

Randy Mclaren, the force behind Cuts & Slices — an impresario who built up a celebrity clientele with his sneaker concierge service — filmed NFL wide receivers Sterling Shepard and Odell Beckham Jr. eating one of his tongue-stinging jerk shrimp pies. They liked the pizza, and so did singer Queen Naija, who, in a separate clip, exclaimed that “there’s a party in my mouth; people are dancing in my mouth,” after sampling a chicken and waffle slice. If any of that sounds fairly routine for the Internet, consider the eyeballs: Those videos and others have collectively racked up over 26.7 million views, shining a powerful light on this four-year-old Brooklyn hangout — a Howard Street spot that has found itself left off of New York’s top slice lists even as it attracts loyal crowds from near and far.

Anyone who’s tried the spicy-sweet oxtail pizza would understand the draw. Cooks dole out the meat generously, allowing the braising liquids to stain the cheese in desert-like shades of terracotta and hematite. The softly crisp crust yields to a gentle bite, while the stretchy mozz and jiggly oxtail provide even more resistance. Salty, beefy juices enrobe the tongue quickly, before a jolt of sweet chile sauce resets your taste buds with a little zing of sugar and heat.

In a city where Italian American slices reign supreme, the Caribbean ethos of Cuts & Slices serves as a welcome outlier — while also functioning as a gentle reminder that one of the city’s quintessential forms of nourishment should more frequently expand past its more European roots. Or put more bluntly: This is damn good pizza, and quite frankly it better be if you’re paying $10 or more for the best slices here.

“Oxtail prices went up,” Mclaren said over the phone, explaining his decision to hike that slice to $11, up from an already steep $9. He also sells, alongside garlic knots and other fare, curried oxtail slices and jerk chicken or shrimp slices, preparations that he attributes to his heritage. “I’m Trinidadian. I grew up eating West Indian food. I get a little creative,” the East Flatbush native said. And while one can find whole oxtail pies at sit-down Caribbean restaurants like Zurliee and Suede, they’re tougher to come by as fresh, crisp, individual slices. Even more rare, of course, are more freewheeling slices like chicken and waffles ($7).

Whether you actually want a chicken-and-waffle slice will depend on whether you want your pizza to taste like maple syrup and breakfast pastries. It was one of the first offerings Mclaren debuted when he opened Cuts & Slices in 2018, using proceeds from his sneaker business. The original space was aggressively bare bones — essentially just a kitchen. Last year, however, Mclaren expanded into an old hair salon next door, making room for a small standing counter and an arcade system for free postprandial revelry; I played a fighter game that let me electrocute an anthropomorphic raccoon.

When chatting about the state of his shop, Mclaren is quick to thank the fickle social media gods. “TikTok has been helping us,” he said, adding that going viral “brings a lot of business.” When I mention that his pizzeria still manages to fly under the radar despite a certain level of Internet fame, Mclaren has a few thoughts as well. “I’m flying under the radar because I’m a Black-owned pizzeria,” he said.

The shop used to rely on popular apps like Slice and DoorDash, but Mclaren has since quit them, explaining that he wasn’t happy with the quality of delivered pies. The services also contributed to selling out early in the afternoon, a reality that worked against folks who’d queue up for the slices in person — some of whom might come from as far as Jersey or Connecticut.

I too would travel a ways for the curry oxtail slice ($11), a white pizza painted with so much sauce it flaunts a forest green hue. The bread remains firm and sturdy, never buckling under the weight of the meat, and it smells of heady garlic, spiced onion, and caramelized cheese. The oxtail, in turn, adds assertive beefiness, a gelatinous stickiness, and a warming layer of heat. Helping matters here is the fact that Mclaren puts out an impressive crust. He doesn’t reveal too many details about the dough, or his toppings, but he said that it’s a 72-hour process, and the result is something lighter and less filling than some of the city’s more glutinous slice pizza.

Two slices would make a nice light meal: I’d recommend a duo of oxtail slices, or consider pairing one with the with the jerk shrimp ($10). Mclaren cooks the tiny crustaceans with preternatural care; they’re as soft as expertly grilled lobster claws and they scream with notes of allspice. A pungent jerk sauce doubles down on those flavors and imparts a hint of sweetness as well. The chopped cheese slice ($7), a riff on the bodega staple, is also a solid option. Cooks use only slightly less beef than what one might find on a Turkish meat pie, and add sturdy doses sweet sriracha and American cheese.

New York slice shops have long served innovative fare, like pies studded with Buffalo chicken or ziti. But Cuts & Slices feels more genuinely progressive, like a Caribbean analogue to the South Asian pizzerias of the San Francisco Bay Area, or a slice shop answer to California Pizza Kitchen’s underrated global creations. Mclaren tells me he’s actively looking for a new location, and he’s got a sneaker collaboration with Adidas coming up, but for now, the standalone establishment easily ranks among the city’s great and most interesting slice shops, something TikTok fans, neighborhood residents, and Jadakiss already know.

Our review of Cuts & Slices 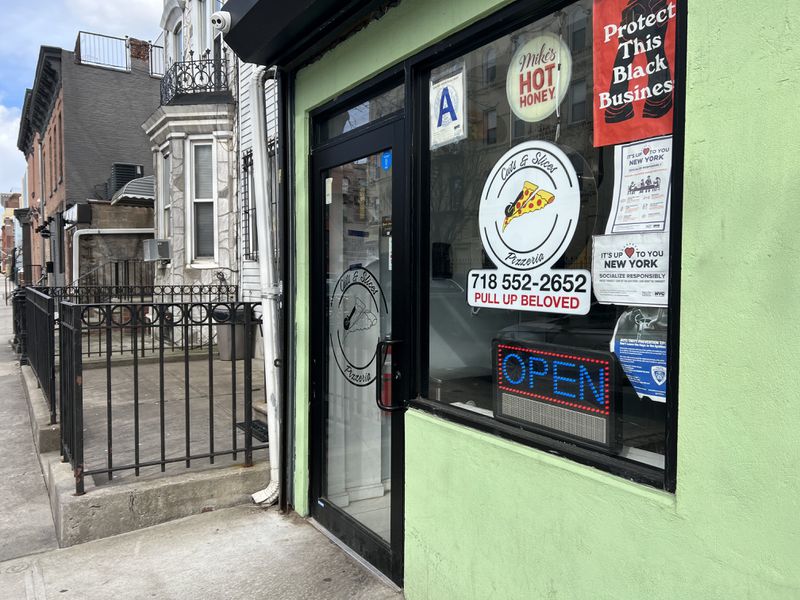 Bonus tip: For those who don’t eat pork, the pepperoni here is made from beef. There are also vegan options, including for the chopped cheese slice.