Review and information for Hawksmoor

The two most affordable steaks at Hawksmoor, yet another bastion of beef hawking porterhouses as pricey as monthly gym memberships, merit particular consideration because, well, some diners will find them to be the only affordable steaks at this U.K.-based chain. One is a dry-aged rump roast — a charcoal-charred and bloody cut butchered from the bottom round. The other is a pair of succulent lamb T-bones, dotted with capers and doused in jus. Each one is stupendously delicious enough to warrant a trip to this Gramercy newcomer alone, and both manage to fall short of the $30 mark.

Most other cuts will run nearly twice as much or more.

Steak, a classically American form of opulence, is becoming more and more out of reach to everyday diners in an era of surging inflation. Beef prices are up over 17 percent nationally since last year. And a single steak for one at any number of local steakhouses — whether spectacular or distinctly average — will now exceed $100 after a side, tax, and tip. Indeed, in a city replete with pricey wagyu strip loins or brobdingnagian bone-in ribeyes, a restaurant that truly wants to stand out will find a way to indulge patrons with smaller, more economical steaks that still feel like luxuries.

Hawksmoor is one of those restaurants. Sure, almost half the meat offerings are exorbitant large-format affairs, but the budget-friendly lamb T-bones and beef rumps easily rank among the city’s best new steaks. In fact, when you consider Hawksmoor’s unusually accessible lobster option, there’s perhaps no other chophouse in the city serving a better and more fairly priced surf-and- turf.

If only one could speak as highly of the pricier items. During my first visit last November, I sidled up to the bar and treated myself to a $65 ribeye. The 14-ounce cut, alas, didn’t rise to the level of what its competitors offer, especially Gallagher’s, the city’s other high-profile charcoal steakhouse. Yes, the fiery briquettes kissed the beef with a touch of smoke, and the flesh evidenced appropriate tenderness, but that was about it. Those Stilton-esque scents one expects from dry-aging were muted, as were the cut’s signature beefy or minerally notes. It was an exceedingly bland steak.

Then, when I returned in February, I sampled some of the less extravagant items and hit the jackpot. Case in point are those ovine T-bones. Some lamb steaks are mild and evoke beef; chef Matt Bernero instead sends out cuts as powerfully scented as mutton. The exterior fat even sports a faint blue cheesiness that evokes dry-aging. Leaves of sharp mint cut through the barnyard aromas like a dagger, while capers add a whisper of salt to the juicy flesh.

I also went back for the hearty rump, which has little in common with stereotypically cheaper cuts of meat on any given menu. Consider the butcher’s steak at St. Anselm, a $29 hanger bursting with luscious fats and garlic butter. Or take the petite Romanian skirt at Frank’s on Long Island, slicked in duck sauce and Worcestershire. In both cases, these tavern-style cuts deliver ultra-rich flavors and nourishment in smaller packages than the weightier chops available at those same venues.

The rump steak at Hawksmoor, by contrast, is an actual steakhouse steak. It is meant to overwhelm with its girth. It sits roughly two inches tall and weighs in at a serious 12 ounces. The exterior is as burnished as stained wood, but shows none of the chemical bitterness of, say, certain gas broiled steaks. The charcoal heat imparts a subtle and welcome whiff of hardwood. Hawksmoor’s 35-day dry-aging, in turn, lends a buttery and distinct musk to meat. The steak’s exterior is well-salted, while the interior is medium rare and faintly juicy, with that faint ferric tang you expect from a good prime rib. It chews somewhat densely, exhibiting the lean heft of a New York strip, and that’s the point; it makes you work a bit.

Two diners wouldn’t feel shortchanged splitting the rump, especially not after a side of crisp beef fat fries, also sporting a hit of heady funk, and a half dozen charcoal-roasted bone marrow oysters, warm and jiggly bivalves that burst with notes of brine and beef.

For a more epic surf-and-turf, ask for the lamb or rump steak with half a lobster ($30). Hawksmoor warms the crustacean over coals and serves it doused in garlic butter. What results is a triumph; the fat, tender claw flesh bursts with oceanic notes, while the silky tail meat smacks of woodsy smoke. It’s instantly one of the city’s great lobster dishes.

A server might push you to finish things off with the signature toffee pudding, but one of the cheapest composed desserts — the $12 Meyer lemon bomb — is a smarter move for those who want something lighter. The kitchen covers a soft sphere of lemon ice cream in a sugar shell surrounded by lemon granita, lemon segments, and candied zest. It’s precisely the type of tart and fragrant refreshment that helps ease the pain of overeating — not something that traditionally heavier steakhouse desserts can usually claim.

Are there other good steaks at Hawksmoor? I like to hope so, but I have no plans on working my way through all the other pricey cuts. The five boroughs suffer from no shortage of expensive red meat, and some of it is quite good. A slightly more inexpensive steakhouse meal, however, is more rare, and that’s where Hawksmoor shines in its stateside debut.

Our review of Hawksmoor 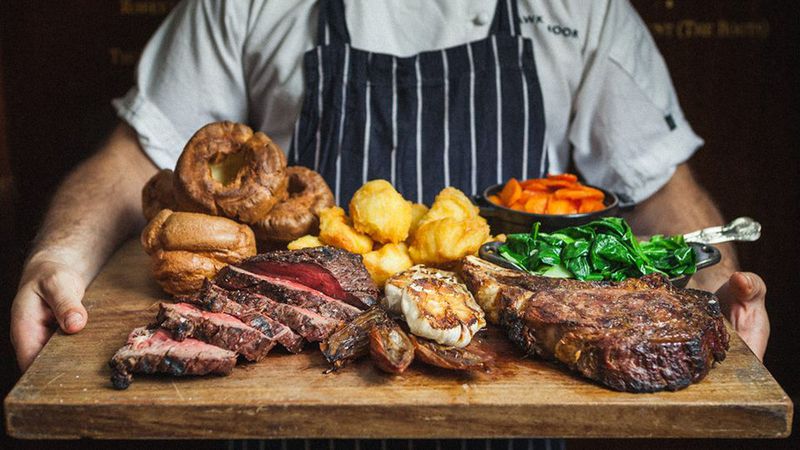 Cost: Starters at $12-$26; mains and steaks at $22-$225; desserts at $10-$18. Diners who order a more affordable meal of three oysters, a rump steak with fries and a sauce ($5), and a lemon meringue bomb will spend $78 after tax and tip. A surf-and-turf meal with a popover starter, lamb T-bones with half a lobster and fries, and tributes for dessert, will run $116 post-gratuity.

Bonus tip: Corkage is just $10 per bottle (even for magnums and larger bottles) on Mondays. The rest of the week corkage is a very fair $35.