Bonnie’s Is a Williamsburg Party Worth Waiting For

Share All sharing options for: Bonnie’s Is a Williamsburg Party Worth Waiting For

Review and information for Bonnie's

Cacio e pepe literally means “cheese and pepper,” and that’s about all there is in this famed Roman pasta dish, other than water, salt, and butter. Bon Appétit once called a version “stripped-down mac and cheese,” while Twitter users frequently quip that the dish translates to “adult buttered noodles.” At Bonnie’s, however, a rollicking Cantonese American restaurant in Williamsburg, the kitchen launches this typically mild-mannered pasta (along with everything else) into the flavor stratosphere. Here, cacio e pepe means fat and firm bucatini, truckloads of pecorino and Parm, showers of black and white pepper, and a generous dose doufuru, a Chinese fermented bean paste whose funk nearly puts the dish in the category of a dry-aged steak. Oh, and the chefs also add MSG.

Chef Calvin Eng, a native Brooklynite who last worked at Win Son, lets the ingredients emulsify in a ripping-hot wok, allowing the components to caramelize and coat the noodles until they look stained. The sauce is powerfully saline, with a roundness that causes the mouth to salivate intensely. The coarse pepper generates a punch of heat that could stop conversation in mid-sentence. And the combination of doufuru and cheese imparts an aroma so sweetly pungent it’s like standing next to the fromage station at a gourmet market. This cacio e pepe is balanced but turbocharged, an experience not dissimilar to blasting an operatic aria at volume and bass levels better suited for Metallica. And that’s just as well, because the dining room din and soundtrack — Mos Def, Shyne — is cranked up to such a degree that you need these ingredients to speak up a bit, or even shout. These are most definitely not buttered noodles.

Now, a warning: You might’ve crossed borough lines to visit Bonnie’s for some of the city’s finest new noodle dishes, but folks are also here for the party. Groovy bathroom lights flash from purple to red to green. Bartenders shake sweet espresso martinis (spiking the coffee with orange pekoe and vodka), savory MSG martinis (like drinking a dozen oysters), and $80 pitchers of Long Island iced tea (with Mexican Coke to make it gourmet). A single lazy Susan decorates a table up front while the large group sitting there ignores it. Waiters ferry over char siu “McRibs” — sandwiches whose sweet glazes are tamed by the musk of good pork ribs and the powerful sting of sharp mustard. And patrons arrive in clubbing clothes, casual clothes, and jumpsuits decorated with dragons.

The collective style among patrons is gallery chic — and I should note here that one of the coolest people I know finds the coolness at Bonnie’s a bit overwhelming. This can even feel true at 6 p.m., when the wait might stretch well past 90 minutes. That all said, on this quiet stretch of Williamsburg, near the BQE overpass, Eng serves some mighty good food.

A new class of young (and corporate) operators, many of them from the mainland or Taiwan, have dominated the city’s new Chinese scene as of late, serving up skewers, soups, hot pots, shellfish boils, night market fare, and regional dishes, catering to both gourmands and expatriates craving the contemporary wares of their homeland.

Bonnie’s — along with Tuome, RedFarm, and others — represents something different: an effort to reimagine the Cantonese American culinary experience through more distinctly stateside filters, be it cardboard-box takeout, expensive banquet fare, nearby delis, or literally whatever other local restaurants are serving, from ambitious French to regional Italian. Bonnie’s, for its part, channels these influences through the lens of nostalgia. It is Eng’s paean to growing up Chinese American.

That nostalgia comes in many forms. Some of it is classic: banquet-style creamed and fried shrimp, an oceanic foil for crunchy, candied walnuts. Some of it is fast-food, with those saucy (and pricey, at $25) McRibs, or with the Filet-o-Fish — really a takeout sausage patty, but decked out in shiny American cheese. And some of the nostalgia is suburban chic, like with feathery rings of squid meant for dunking in cooling ramekins of ranch.

Then there are the noodles, which occasionally owe as much to European techniques as to Chinese sensibilities. When Eng sampled tortellini en brodo in Bologna for the first time, “all I could think about was how it reminded me of wonton soup,” the chef tells me. As such, he miniaturizes the typically fat dumplings, Italian-style, stuffing them with firm knobs of ground shrimp. For Guangdong-style rice rolls, Eng lightly wok-fries his cheung fun for a subtle chew, but leaves the insides pleasantly squishy — all the better to sop up a powerful XO sauce, replete with dried scallops.

For black pepper beef, the kitchen slathers the dark, saucy meat atop a crispy nest of golden chow mein. The noodles are snappy at first, then exhibit more tensile strength as they absorb the gravy, then finally turn soft and twirlable as they become fully saturated. Take a bite, and let the warming heat light up your esophagus. I can think of no other new restaurant — Italian, Chinese, Euro American, or otherwise — dedicated to showcasing such eclectic noodle preparations, not to mention highlighting such diverse textures and flavors within those dishes. I can also think of no other spot where the bartender might ask if you want to chase all the starchy goodness with a house shot (don’t worry, it’s just vermouth).

Menus teeming with high-acid fare are still a hallmark of a certain style of contemporary dining. Chefs, often at hip wine bars, set-menu venues, and Brooklyn pizzerias, like to brighten up their creations with puckery salads, zingy ceviches, and boquerones galore. Eng, to be clear, is not one of those chefs; Bonnie’s is about as high-acid as an Applebee’s. This is a temple to fat, starch, protein, and most importantly, savoriness. The fermented tofu is a key weapon here, adding umami to not just the cacio e pepe but to tinned dace fish. What results is the closest thing I’ve had to foie gras that’s not foie gras (Eng adds a bit of cream cheese, too). Or take that wonton soup again. The chef fortifies a classic superior broth with Parmesan rinds, a technique that adds to the roundness. He also throws in a bit of orange zest that lends fragrant, citrusy perfumes.

Monosodium glutamate is a weapon of choice, too, not just in the cacio e pepe but in that MSG martini. It’s exhilarating at first, when you’re sipping cold vodka while feeling your gums tingle as if you were slurping shellfish liqueur. After that, the drink can overwhelm the palate — even more so amid all the highly seasoned fare. Black bean garlic sauce jolts up the umami factor with steamed eggs, but the dish is a skip, too, as the stiff custard doesn’t quite soak up the flavors of the muted shellfish.

Bonnie’s offers just three mains, that lovely McRib, a traditional bak chit gai chicken, and a really big trout. Order any of the three while keeping in mind that each one is enough for two.

With bak chit gai — similar to poached Hainanese chicken — Eng simmers the bird and serves it cold with a grassy fistful of cilantro, though the hot rice underneath heats up some of the flesh, releasing its gamy fragrance. A side of golden broth amps up the umami factor; you can dunk your chicken in the soup to warm up the meat even further.

The trout, a delivery mechanism for Chinese-style fish sausage, is no less grand. Eng debones the whole thing, purees the meat with shrimp, stuffs it back into the hollowed-out fish, and grills it on a flattop. You pick up a single slice, wrap it in bitter lettuce, and let the astringent greens tame the sweet and bouncy filling. “I love hearing when people compare the trout to gefilte,” Eng tells me, or when folks liken his tinned dace to chopped liver. “Even if they didn’t grow up eating these dishes it still resonates with them and feels nostalgic.”

A Cantonese fruit tray, teeming with orange segments, grapes, and dragon fruit, is a typically banquet-style way to end things. A vanilla ice cream sundae, by contrast, offers a bit more sustenance, without veering toward rampant sweetness. Nuggets of crisp fried milk sit around the edges of the bowl, counteracting the coolness of the frozen treat with warmth and maltiness. Then again, another option is to just do a shot with the bartender and party on, for a bit of classic Williamsburg nostalgia.

Our review of Bonnie's 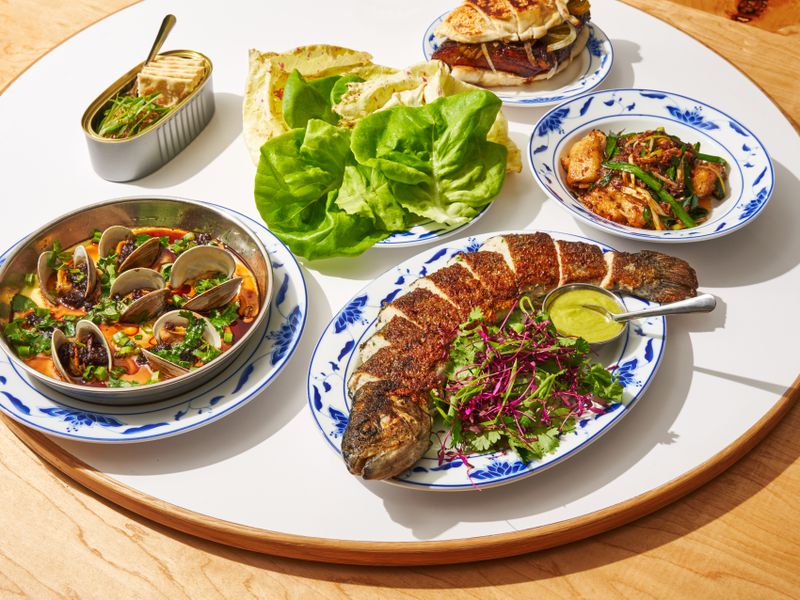 Bonus tip: To avoid a seriously lengthy wait, try booking the second tables are released on Resy, or arrive as a walk-in as close as possible to 5:00 p.m. Sandwiches and other smaller items available for takeout and delivery.