Review and information for Lord’s

As New York continues to drown in generic brasseries and chophouses — venues where most diners could recite the menu from memory without ever seeing it in the first place — a damn fine Greenwich Village restaurant is packing the house with gutsy British fare.

Tripe jiggles in Madeira sauce. Blood sausage and pig’s face enrich a cassoulet-like bowl of beans. Stilton-laced steam rises up from ox cheek pie, the flaky exterior topped with bone marrow butter. See that duck-stuffed cabbage on the table next to you? Cooks grind up the poultry with just a little bit of liver, heart, and gizzards — organs that impart the inky prune sauce with a complex and earthy sweetness.

If chic Brooklyn party spots and hip Dimes Square hangouts are New York’s of-the-moment restaurants, Lord’s is precisely the opposite. The food here feels like a mid-aughts playlist teeming with the Strokes and Phoenix. Shout out to owners Patricia Howard and chef Ed Szymanski, the duo behind Dame, for turning up the volume on the oldies, pushing out the type of food that coursed its way through New York’s gastronomic zeitgeist 15 years ago.

Remember 2006, when the ragtag chefs at Ssam Bar were slinging so many off cuts the menu had a proper offal section? A few years later, the Breslin started commanding two-hour waits for large-format pig’s feet. Babbo powered through the decade serving brain ravioli and beef-cheek pasta with crushed squab liver. Heck, even Per Se used to advertise an offal tasting, chock full of cerveaux, tripe, and smoked marrow.

British chef Fergus Henderson, perhaps more than anyone else, was the driving force behind the popular surge in these so-called nasty bits. The St. John restaurateur published a wildly successful cookbook, the famed “Nose to Tail” bible, in 2004. A few years later he drew impossibly large crowds for a Momofuku Noodle Bar guest dinner, replete with yakitori chitlins. Anthony Bourdain once called Henderson a “walking Buddha,” explaining that he “completely expanded the larder and gave chefs permission to cook the parts they’d always wanted to cook.”

It seemed for a time that whole animal cookery was the future of meat eating in New York. Until it wasn’t. Ssam Bar shed its offal menu. So did Per Se. Many folks stopped dining at the Breslin and Babbo after detailed reports of abuse surfaced before the pandemic. Though really, as the city pushed past the Great Recession earlier in the decade, it already seemed as if the future of meat eating in New York was just a bunch of expensive restaurants serving the same dry-aged steak for two.

This is what makes Howard and Szymanski’s restaurant so vital. Just as the empire of Margot Henderson and her husband Fergus continues to flourish in London — GQ dubbed the couple the “beating heart” of British cooking this year — the crowds at Lord’s seem to suggest New Yorkers wouldn’t mind more of the sticky, viscera-laden cooking that was once more prevalent at Euro-leaning venues around town (a style of cooking that remains vital and popular at Sichuan, South Asian, Korean, Japanese, and Latin venues).

Consider the Madeira tripe. The organ often flaunts a firm, spaghetti-like texture elsewhere. Szymanski instead braises it with calves’ feet until the whole dish takes on the texture of warm Jell-O. Solid strips of intestine wobble in the mouth like a meaty panna cotta, ready to transform into liquid with a flick of the tongue.

Okay, maybe some diners aren’t coming for cow’s stomach. I once asked the chef at a hip Roman spot how long he’d keep his lovely tripe pizza on the menu. Spoiler: It didn’t last too long. So yeah, some folks are likely hanging around Lord’s to witness the second act of Dame, a tiny spot that requires you to spill the blood of a one-eyed hawk during a lunar eclipse to get a decent reservation.

Lord’s is larger and less mild-mannered, and while the dark and woodsy tavern is never not packed, same-day seats often show up on Resy. One might encounter folks dressed to the nines, fellow chefs in t-shirts on wooden bar stools, someone drinking a 1995 Chateau Leoville Barton in a Ransom Drysdale-esque sweater, and maybe a bunch of patrons in baseball caps. The vibe is that people are here to eat.

Start with plump, warm oysters. The kitchen dots the bivalves with guanciale and caramelized onion, a messy little crown that turns the briny liquor smoky and musky. Scotch eggs — usually deep-fried and wrapped in pork sausage — are a satisfying, run-of-the-mill bar snack at other pubs. Here, Szymanski coats the eggs in lamb farce, leaving them with profound notes of garlic, curry paste, and funk.

If any of that sounds too gussied up, try the Guinness-laced Welsh rarebit; it appears to have been foraged from an old ashtray. And yet it’s a perfect dish in every way. Every bite packs the wallop of sharp cheddar, the stretchiness of good sourdough, the umami punch of Marmite, and, thanks to a Cantabrian anchovy, a bracing wallop of the ocean. Drink with beer. (Skip the deviled crab toast, devoid of any seafood flavor.)

Sirloin au poivre, like at Corner Bar, is less about jolting diners with peppercorns and more about letting folks dredge heady, binchotan-grilled meat — the cut almost seems to pull apart like an accordion — across a pool of gelatinous sauce. Looking for more beefy goo? Ox cheek pie shows off a cut of cow rendered to a texture I’d call slithery; it packs just enough Stilon to make one wonder whether the meat was dry-aged.

Szymanski also crams as much rib-sticking depth into his grilled maitakes and chanterelles with lentils; one wouldn’t be faulted for thinking the kitchen forges the ultra-rich glace from veal stock (it’s a vegetarian bread stock).

Bless your inner intestines if you can handle dessert. I couldn’t finish a single $8 serving of (mealy) brown butter ice cream. Instead, have another martini and pray Lord’s remains easier to get into than Dame.

Our review of Lord’s 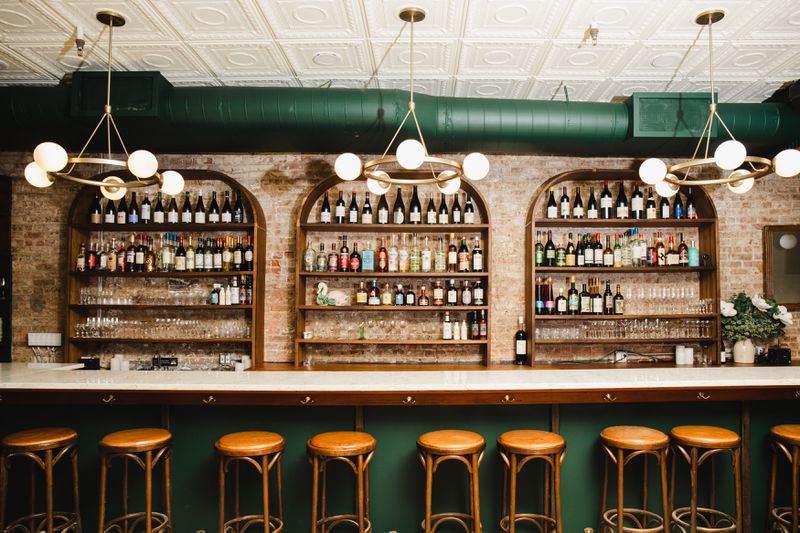 Bonus tip: Bar seats are held for walk-ins, but better to check Resy, where many of those same seats are often available for same-day bookings. Also, for more Euro-leaning offal, also check out Le Rock in Midtown.