Review and information for Noz 17

If you wanted to get a handle on the human psychology behind $1,000 sushi dates, you probably wouldn’t look to a piece of vegan nigiri. The city’s decadent crop of expensive omakase parlors lure in patrons with familiar doses of opulence, dishing out charcoal-torched bluefin, uni as creamy as soft serve, and hand rolls teeming with caviar.

Still, I’ll argue that a morsel of mushroom sushi is at least one reason folks pay vast sums to dine at Noz 17, a Toyota Corolla-sized restaurant that serves just seven diners at a time. Chef Junichi Matsuzaki plays by very different rules than his peers, offering one of New York’s longest and most unconventional tasting menus.

That mushroom sushi, for starters, isn’t a fancy matsutake or maitake. The chef steams a humble shiitake before letting it rest in rice oil. He then adds a scattering of bamboo salt — and that’s it. The texture wobbles like panna cotta; the vinegared rice adds a coarseness, followed by a whiff of spruce that lingers. It’s not so much an actual mushroom as a fantastical vision of one, winnowed down into a three-line poem.

That shiitake is just one bite among 27 or so courses; it’s a meal with more unexpected twists than a Knives Out murder mystery. Crunchy sweets come before savory courses. Bluefin tuna makes up just two silky bites in the extended tasting. Good edomae sushi bars age their fish for flavor; here, the chef goes further, fermenting sea urchin until it takes on the dense, creamy texture of pureed liver. Truffles, wagyu, and caviar are absent — Matsuzaki “doesn’t give a fuck about the Western palate,” co-owner Josh Foulquier tells me.

There is no music, only the sounds of knives slicing through bonito, a dude talking about crypto in hushed tones, and a patron gasping about the cost of dinner. “The most I’ve ever spent on a meal.” The price, $400 with service, is technically on the lower end of the high-end sushi spectrum in New York, which is a fun thing to tell the person paying for you.

The Foulquier Brothers Josh and David, along with Nozomu Abe, have yet another excellent omakase spot on their hands. Then again, Manhattan doesn’t lack excellent and expensive sushi spots — venues where dinner for two can cost as much as a good sofa.

What lets Noz 17 stand out is how aggressively the ordering of courses veers from New York sushi script. I don’t want to give away too much, but dinner might begin with a soft lotus root dumpling with springy tofu skin. Then, if you’re lucky, Matsuzaki will ferry over a bite of gizzard shad sushi, a tiny fish as silver as a vintage fighter jet and as tart as a spoonful of vinegar. Minutes later, the chef places a slice of gently poached square buri directly onto the cypress counter. It’s so high in fat the white fish melts on the tongue like lard. Then sushi arrives again, this time in the form of bouncy, fragrant, yuzu-dusted sea bream.

If you’re thinking that sequence of dishes comes across as slightly weird, you’re not alone. A typical haute omakase in New York features a linear progression: light small plates followed by a parade of more filling sushi — and maybe a toro hand roll to finish off the savory courses. Even if there’s no written menu, the architecture of the meal acts as a road map, just as the three-act structure keeps you grounded in narrative fiction.

At Noz 17, Matsuzaki — taking a cue from Honolulu’s Sushi Sho — effectively throws any road maps out the window. He seems to select his courses at random, moving from slices of raw fish, to nigiri, shabu shabu, more nigiri, drinking snacks, filets of deep-sea mehikari (soft and sweet), palate-cleaning salads with so many grapes and persimmons that they could qualify as dessert, soft bowls of uni rice with grilled sea perch, still more nigiri, and small cups of miso-laced fish bone broth more redolent of the ocean than anything I’ve ever tried in the South of France.

Joshua likens the meal to freeform jazz, but I’d say the omakase is more like an indoor roller coaster in a pitch black stadium. You never quite know where you are or how many more thrilling loops are left; you simply exist in this magic world until things suddenly end.

The house-made bottarga, the color of a pale Dorito, is one of the biggest thrills. Matsuzaki cuts it thick and dries it gently for a soft texture; it’s like snacking on a maritime fruit jelly. Next to the bottarga lies that fermented urchin, a recipe from Matsuzaki’s mother in Hokkaido. It arrives as a tiny orange ball no bigger than a thimble; the flavor is what American cheese would taste like if it were aged like Gorgonzola. Someone put this on a burger.

Is the offbeat structure of the meal not your thing? Then go somewhere else that’s probably just as good. I mention this because a fellow critic recently wrote that Yoshino ($646) and two other venues lie near the tip of the city’s “sushi pyramid,” followed by “everyone else.” It’s a claim that overlooks the true brilliance of the city’s Japanese fish scene.

The beauty of chic omakases right now isn’t a hierarchy — though I have my own list of favorites. The lesson is that good sushi is a bit like wine. You don’t sample an aged Alsatian Riesling because it’s objectively better or worse than one from Germany, the way business class flying is definitively more comfortable than economy. You splurge on one wine or sushi tasting over another because it’s highly expressive and nuanced — or because it’s that one thing you love. Sure, omakases in New York could benefit from more diversity of style, but there’s still so much expertise and variety out there for folks who don’t want a private jet of a meal.

Our review of Noz 17 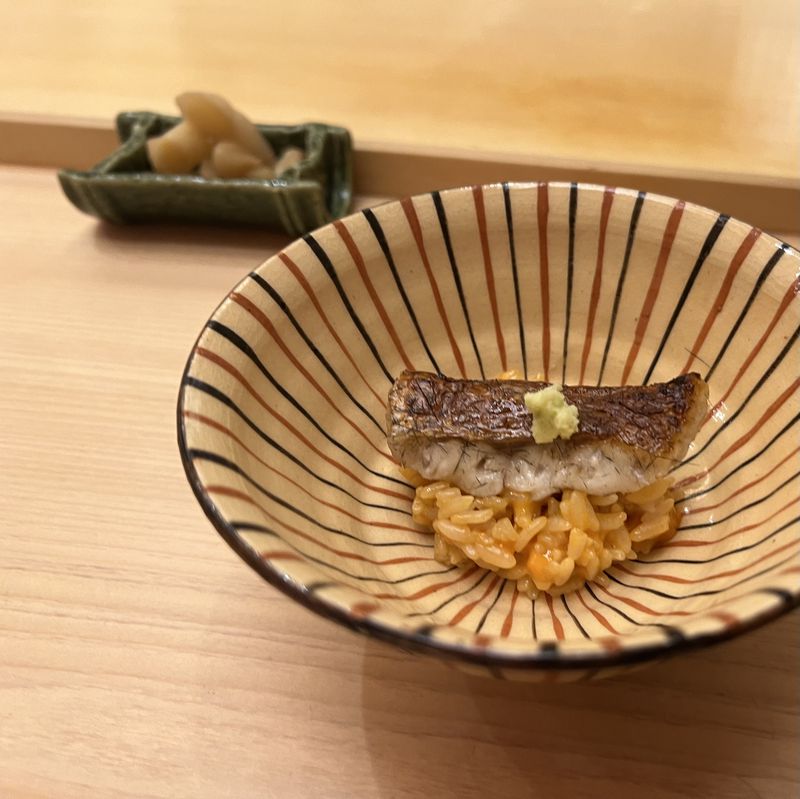 Cost: $400 per person, service-included, or $438 after tax and a small reservation fee. Asahi draft beer or Asahi black (by the bottle) is $15; the cost of dinner can jump up even further after wine or sake. The price of the tasting will likely rise by 10 percent or so next year, an owner tells Eater.

Bonus tip: Unlike other omakase spots that book up a month out, Noz 17 often has same-week (or next-week) availability on Tock.