Here’s What to Order at Le Rock: For Tourists and New Yorkers Alike

Share All sharing options for: Here’s What to Order at Le Rock: For Tourists and New Yorkers Alike

Review and information for Le Rock

Early in the evening on a weekday, one of New York’s hottest Midtown restaurants fills up with a ripping just-left-the-office energy. Here’s a guy drinking whiskey, saving a few seats at the bar for his buds. There’s a tall can of IPA on the bar room’s chic island, with folks milling about, eating while standing up. Sommelier Jorge Riera swings by to say he’s happy to pour me one of his many excellent natural wines, arguably the venue’s trademark. Alas, I too am drinking a very nice IPA. When in Rome!

Welcome to Le Rock, where chefs Riad Nasr and Lee Hanson, the duo behind Frenchette in Tribeca, have constructed an ambitious menu of comte-stuffed sausages, sardine escabeche, consomme with foie gras dumplings, and assorted offal. On a related note: Welcome to Rockefeller Center, where this grand brasserie attracts a crowd that — at least from my vantage point at the bar — likes to order steak au poivre, steak hache, and steak for two.

For a touristy neighborhood choked with media, law firm, and finance types, much of this must feel like a downtown novelty — particularly the pét’nat sparkling wines, served not in Champagne flutes but rather short stems doing their best impression of water glasses.

Tishman Speyer deserves credit for luring New Yorkers to this swath of Midtown with a growing slate of hip restaurants. Le Rock in particular feels like blue blazer territory, a restaurant for your friend in accounting who’s thinking about “getting into food,” or for a daytime talk show producer who wants to be seen out on the town. It’s where you can challenge folks just a little bit with tripe and ris de veau — or just entice them with a decent steak.

Le Rock isn’t trying to tear up the European envelope with modern cooking along the lines of Wildair, Estela, or sometimes, the group’s own Frenchette. Rather it’s just a degree or two edgier than a Balthazar or a Lafayette. Grilled scallops come with a bit of boudin noir. That steak hache is a superb answer to the city’s ongoing burger obsession. In a city where restaurants sometimes don’t even list a dessert menu online, the sweets program can merit its own visit, with Eloise-style trays of cakes and cookies rising vertically from the table.

Sure, it would be nice if the bar seating area didn’t face a wall, and if the Art Deco-ish dining room offered less obstructed views of the splendor that is Rockefeller Center, but for now, Le Rock ranks as a solid addition to the Midtown scene. I wouldn’t go as far as to say it’s “just what” this part of town needs, but if an office worker or your uncle from out-of-town asks you to swing by for dinner, Le Rock indeed is good enough. Here’s what to order if you end up here:

Don’t expect fireworks from Le Rock’s shellfish program: Razor clams arrive in their shells, predictably chopped up and garnished with a touch of lime. Raw scallops taste like nothing. In the mood for a maritime sugar high without much complexity? Capers and eggs (marginally) boost the flavor of one-note Dungeness crab ($68). Things get more interesting with the otherwise ordinary shrimp cocktail. The kitchen serves the crustaceans as they are, plump and sweet, packing a touch of court-bouillon aroma. But right after you gobble them, a waiter magically arrives with something that too many brasseries like to discard: the heads. They’re fried to a golden hue, packing a satisfying crunch and a whisper of funk.

Shout out to Hanson, Nasr, and executive chef Walker Stern for showing off tablier de sapeur, a rarely-seen-in New York dish that involves braising and breading tripe, before deep-frying it like a chicken cutlet. The result is something wonderfully chewy with a hint of barnyard musk. Pan-seared sweetbreads, in turn, come slathered in poultry jus. The entry-level organs, cut from a cow’s thymus gland, show off a majestically spongy, wheat gluten-like texture. Sheaths of broccoli rabe on the side provide crisp contrast. It’s a good dish to get hooked on offal for life.

When Hanson and Nasr re-opened Minetta with Keith McNally in 2009, the duo helped launch New York into a modern fancy burger era. The Black Label came not with cheese but with buttery onions, an allium crown to a luxe, dry-aged grind. It was the pricey burger that fueled a thousand similar pricey burgers, a craze that led Hanson and Nasr to effectively swear off the style — until they opened Le Rock. The duo’s burger is back — sort of — as steak hache ($36), typically a casual and bun-free patty. Le Rock, by contrast, transforms this preparation into an expensive, avant-garde study in red meat minimalism.

The chefs hand-cut a mix of dry-aged ribeye, fresh chuck roll, and beef heart, before forming a little square with jiggly bone marrow. They toss it on the plancha for a nice char, then finish it off with compound butter. The meat is so loose that eating it is almost like digging into a pile of seared tartare. Knobs of beef tumble across the tongue until you chew, releasing all the bovine goodness. Sitting next to the burger is a wedge of gem lettuce and a sweet shallot, both spaced so precisely it’s as if the chefs used invisible TV dinner dividers to measure things out.

Bison au poivre ($60) gets the job done too. Modern chefs tend to go easy on the spice; Le Rock coats the top of the filet with practically as many Sarawak peppercorns as a baker would put streusel atop a crumb cake. The pink flesh pops with notes of iron before a wave of fresh heat hits. Dredge those fries (included) through the lightly creamy sauce.

The critic Alan Richman once famously recounted being served 35 petits fours following a repast at Le Louis XV in Monaco — a sovereign municipality with an unusually high ratio of yachts to humans. Those mignardises and other little sweets tend to be more modest affairs in New York these days — maybe a macaron and a chocolate or two to accompany your check — but Le Rock unabashedly goes full oligarch.

More modest types won’t suffer from a lighter order, perhaps a souffle so airy it would make chawanmushi seem dense, or a baba (another famous Louis XV affair) soused up with not rum but rather an herbal liquor called genepy. I can think of no other new a la carte spot betting so hard on over-the-top sweets.

Our review of Le Rock 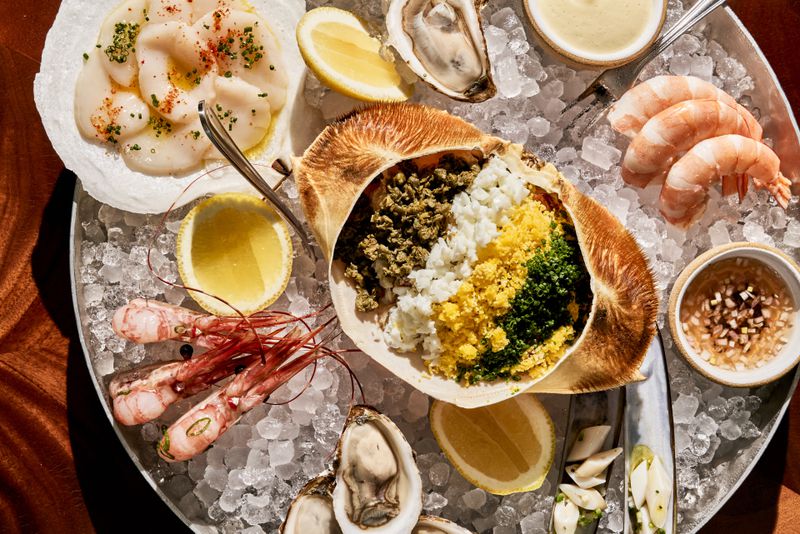 Bonus tip: Swing by the bar for one of beverage director Estelle Bossy’s cocktails, including a “Pineau colada,” made with Pineau des Charentes, plum brandy, pineapple, and coconut.