After beginning life as a fish and chip pop-up, the West Village restaurant has grown into a destination for all things seafood

Share All sharing options for: Dame Introduces NYC to a Thrilling New Era of British Seafood

Review and information for Dame

One would be forgiven for overlooking the mussels at Dame, Patricia Howard and chef Ed Szymanski’s fantastic new British seafood restaurant in Greenwich Village. On a menu teeming with flaming chartreuse oysters (“great for Instagram,” the chef tells me), crab toast dripping with Calabrian sausage oil, and fried lobster claws so large the TSA would consider them a weapon, the humble mussel doesn’t quite stand out. Unlike at a bistro, where giant piles of the shellfish sit above buttery pools of shallot sauce, they come in much shorter supply here, and in much more subdued fashion. At Dame, the chef confines the mussels to playing a backup role in a cucumber salad.

Should you manage to secure a reservation, a feat in and of itself, you should absolutely order that salad. There might be no other seafood dish in the city like it.

Cooks spoon a brown mussel emulsion on a white plate, as well as a serious dose of dill oil for a more verdant backdrop. The kitchen then scatters seven or so de-shelled mussels around the dish, tucking the tan mollusks in between taller slabs of light green cucumbers. The cooks finish off everything with a canopy of dill fronds and shaved horseradish. You take a bite of cucumber, which tastes like any other cucumber. Then something magical happens. You drag it through the sauce and all of a sudden the clean cucumbers take on a luscious, briny quality, as if someone had dunked them in a mixture of seawater and garlicky cream. The horseradish lights up the sinuses a touch, while the plump mussels, having spent some time in a smoker, give off a sweet, hardwood aroma.

It’s tempting to think of this all as the fancy maritime equivalent of a wedge salad, with the cukes standing in for crisp lettuce, the small portion of shellfish substituting for bacon, and the emulsion playing the role of a tangy blue cheese dressing. But perhaps the larger lesson is a simpler one, which is that the best chefs know how to elicit surprises from even the most predictable ingredients. Just as the team at Le Bernardin finds a way to make salmon an unlikely showstopper, Szymanski takes a handful of mussels and transforms them into a more powerful littoral force than an entire bucket of black bivalves. The dish functions as a smart reminder that a seafood spot can sometimes challenge diners with sustainably minded creativity instead of indulging them with a laundry list of haute imported products, and that it can lean back on the funkier textures and flavors of our oceans, rather than touting yet another filet of seabass or plate of fluke crudo.

New York was in need of another great seafood restaurant. Outside of booming $300 omakase establishments that are only accessible to the deepest-pocketed diners, ambitious fish spots have suffered heavy losses over the past few years. Diners can no longer sample oyster pan roasts with uni butter at the ambitious yet casual John Dory Oyster Bar, which closed in 2019. The (aggressively priced) Pool by Major Food Group shuttered shortly before the pandemic, while Flora Bar, famous for its avant-garde nori and raw shrimp wraps, closed during COVID. We also lost the majestic Kawi recently, a destination for funky Korean-style clams in chile sauce and gelatinous raw blue crabs.

Eater New Guard winners Howard and Szymanski help fill in some of these gaps, albeit in their own peculiar way, as Dame doesn’t quite follow the predictable rhythms of modern fish spots: There are no raw oysters on the half shell, multitiered seafood towers, shrimp cocktails, sea urchin supplements, exorbitant king crab specials (“we got it in live yesterday”), assorted lime-y ceviches, lean sashimi platters with ponzu, caviar services, nori wraps, whole fish by the pound (“we’ll tell you how much it costs when you pay your bill”), or “from the land” steak offerings.

Dame is a study in strongly flavored, uniquely composed small plates. If simply prepared fish is the star at the Greek Milos, and if French-y Le Bernardin is a grand balancing act among delicate seafood and a head-spinning array of sauces, Dame more assertively jolts the palate with magnified levels of salt, fat, herbs, and other seasonings. That means you might encounter a $10 turbot head as a special. Order it and you’ll spend the next five minutes training your fingers to pick through a bony fish cranium for all sorts of jiggly, gelatinous flesh covered in parsley butter.

The only lobster dish, often one of the most straightforward preparations at any seafood venue, comes with bovine offal. Szymanski pairs a grilled tail and a deep fried claw with crispy veal sweetbreads for no reason in particular other than, it seems, to subvert a classic surf and turf. The crustacean’s tail emits such a heady salt-air perfume it fills the small room whenever the chef starts preparing it; the battered claw, in turn, packs a sweetness that borders on candy-like. The sweetbreads, unfortunately, might be overcooked to the point of gravel.

Dame often offers a whole turbot for two, which is about as traditionally luxurious as things get here. Yet on other nights the only whole fish is a $28 mackerel showered in mint and flanked by horseradish cream.

Heck, even the semi-obvious toast preparations taste nothing like they do elsewhere. For raw tuna on sourdough, the kitchen shaves so much orange bottarga over everything that it could almost qualify as an egg dish. The generous application of dried mullet roe imparts the crimson flesh with nuclear levels of umami and a minerally, metallic punch.

Even better is the crab toast, a pile of peekytoe mixed with its own tomalley for a nice high-tide punch. The chef also adds a bit of ’nduja for heat, and to turn the meat a light shade of red. Szymanski lets the drippy toast soak up a lot of the crabby juices to make sure the bread isn’t just taking up stomach space, while a fistful of cilantro keeps each bite grassy and bright.

The fact that Dame is doing any of this on a regular basis is a feat in itself. It’s one of those rare venues that has effectively managed the transition from a heralded pop-up — the owners started off just selling fish and chips earlier this year — to an impossibly packed establishment that books up nearly a month out. Howard and Szymanski, a couple who met while working at the Beatrice Inn, plopped down roughly $230,000 this summer to open the 60-seat spot on MacDougal Street, a stretch of the Village known more for its bustling bars and walk-in brasseries than small-plates places serving precise, painterly compositions.

Yet here’s Dame, pumping Cyndi Lauper’s “Girls Just Wanna Have Fun” through the small, blond-wood space, while cooks in a shoebox-sized open kitchen set blowfish tails atop pools of Espelette butter. Blowfish is bland; the point here is to let the fish act as a firm, meaty mop for that tangerine-colored sauce — an initial bite yields stinging notes of dairy-laced heat, before a red pepper relish adds a touch of vegetal sweetness. Want to try them? Reservations book up about three weeks out, though sometimes the venue can accommodate last-minute diners later in the evening. Be prepared to dine at 10:00 p.m. or later.

Szymanski’s menu is tight: 12 a la carte savory dishes over three menu sections divided by size. A proper meal consists of one dish from each section, but servers stress that one can build a longer (or shorter) dinner out of a collection of the more modestly portioned dishes.

I like to stock up on the smaller items, which change with some frequency. If the kitchen is peddling those blowfish tails, order them as they might disappear by your next visit. Same goes for the raw scallops, dotted with kaleidoscopic cherries and berries in such a way that the dish becomes an ode to the colors white, red, yellow, and green. A smoked whitefish broth unites all the elements. Like with the mussels, protein is just a background note; the scallops offer a bit of textural slipperiness while the sweet-tart fruit and salty broth dominate. Szymanski also slips in a bit of yuzu kosho to shock the palate with citrus and chiles. The composition style is akin to a Jackson Pollock drip painting; the dish manages to find balance without a central point of reference. The profusion of ingredients suggests haphazardness, but then you start eating and realize it all works perfectly.

Avoid the flaming Instagram oysters, which taste like someone doused a good mollusk in anise-spiked grain alcohol and forgot to burn off the booze.

The fish and chips, a holdover from the pop-up days, feels like an outlier, a fairly basic dish that almost doesn’t seem to belong on a menu with such specific ingredient combinations, but Szymanski manages to produce a version that’s no less precise than anything else on the menu. Dame’s effort is so densely craggy it looks like a fossil, a hake that was flash-fried in a paleolithic meteor blast after being dredged in delicious batter. The teak-colored exterior packs a crunch that almost recalls baklava; it’s a multilayered creation that shatters in all sorts of complex ways. Then at the center, white flesh reveals itself: a sheath of well-salted hake. This by itself would be majestic, but Szymanski atomizes his creation with malt vinegar, leaving the crust with a distinct aroma that recalls tart Whoppers malted milk balls. One eats this with fat, thick french fries.

In the summer months, Dame places plump cherry halves atop a custard-filled tart shell and serves the whole thing with a Laguiole steak knife, as if to suggest that such fleshy, floral sweets are as hefty and filling as a steak. Champagne grapes have since replaced the cherries, though a generous handful of raspberries, blueberries, and strawberries still add racy acidity and garden-like perfumes to an Eton mess, that classic mix of fruit, cream, and crisp meringue. Indeed, these desserts are more straightforwardly sumptuous than the edgier savory fare, but so be it. Dame pushes the envelope far enough on the ambitious seafood front, giving the city something that’s less expensive, rigid, or grand than a new sushi spot or than Daniel Boulud’s Le Pavillon at One Vanderbilt (more on that spot in a bit). So at the end of a meal at Dame, it’s okay to enjoy something simpler with a bit of whipped cream on top. We’ve all earned it.

Our review of Dame 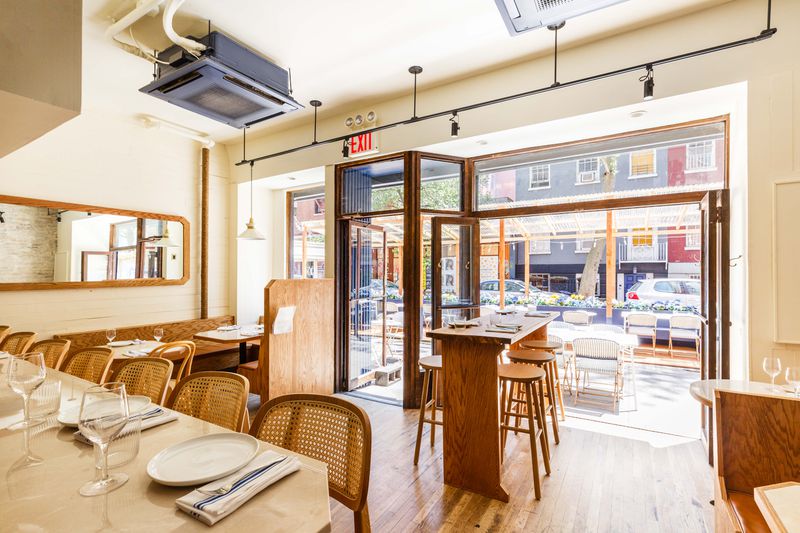 Bonus tip: Reservations are released three weeks out and are often snapped up within seconds. Consider using Resy notifications or contacting the restaurant directly for last minute availability.