Review and information for Falansai

At Falansai in Bushwick, a chill Vietnamese-American spot with a leafy outdoor garden, a sedate hip-hop playlist, and a friendly dog that patrons might have to step over to reach their table, you’ll want to order the tasting menu.

That suggestion might give pause to folks who normally enjoy the venue’s easygoing a la carte plates, be they the five-spice duck necks or the charred cabbage with chicken pho broth. New York has no shortage of exorbitant set-menu venues, establishments where dinner can stretch out longer than a feature film and set you back more than half your monthly rent. Falansai is not one of those places. You’re in and you’re out in about 90 minutes — maybe two hours, tops — and the whole six-course meal costs $83. A shorter four-course menu is available too, for $45, though for an ever-changing menu of spicy, experimental, and sometimes offal-y dishes, the extended tasting is the way to go.

To start, the kitchen might send out beef tartare spring rolls, with the cool, neutral meat acting as a soft counterpoint to the pickled carrots and puffed brown rice inside. Another night, chef-owner Eric Tran, a Blue Hill alum, lets the beef play a more starring role. He stuffs grilled tongue into the diaphanous rice wrapper, letting its bovine funk shine before bright vegetables dial down the richness. Tran has since added the spring roll to the regular menu, but during my series of visits, it was strictly the domain of the tasting menu. It came early in the meal, to whet the palate before richer courses.

Modern Vietnamese cooking is booming in New York at venues like Di An Di and Em, with young restaurateurs looking beyond pho and banh mi to show off more of that country’s contemporary and dynamic foodways. What sets Falansai apart from the pack, at one level, are freewheeling and sometimes Latin American-ish takes on Vietnamese food. Tran, who’s of Vietnamese and Mexican descent, might add a bit of avocado to a spring roll, or cover a ramekin of tender calamari with a blue corn tostada. But what truly distinguishes Falansai is the prix fixe format, which is rare for a New York Vietnamese restaurant, and which gives the chef more freedom to creatively interpret, execute, and pace a nightly meal on the fly. There are no printed or online menus; you don’t know what you’re getting until you sit down, though you can be assured that your meal will almost entirely deviate from the a la carte offerings.

In pulling off these feats, Tran makes a good case for a more dressed-down and challenging take on a tasting menu — recalling some of the post-Great Recession-era set-menu spots that eventually gave way to more aristocratic, straightforward, and predictable luxury in the five boroughs.

“I don’t miss tasting menus” is something I’ve heard folks say as they return, sometimes precariously, to restaurants. The multicourse nature of extended meals didn’t necessarily mesh with the takeout-centric leanings of pandemic-era gastronomy, even if some establishments found ways to cater to clients looking to spend $500 or more on delivery. The social distancing requirements of COVID-19 also raised questions around old hospitality practices like spending a few hours indoors — where a staffer would swing by every 10 minutes to clear a course, crumb the table, and present an unnecessary set of new silverware. Those tiresome formalities are surely part of the reason that, even before the pandemic, expensive a la carte venues seemed to overtake non-Japanese tasting-menu spots as the fancy meals of choice. When Hudson Yards instantly became one of the city’s newest and priciest dining neighborhoods in 2019, that multibillion-dollar development largely steered clear of set menus.

The thing about Falansai, however, is that it occupies a more accessible place within the patrician tasting-menu landscape. The reasonable pricing, quick pacing, unobtrusive tableside service, and restrained approach to hospitality — you might enjoy your meal in the un-airconditioned garden on a humid day — puts the venue in conversation with the neo-bistros of Paris, places where one can enjoy a leisurely but ambitious meal of up to 10 courses for about 100 euros or less. These are places where dinner does not dominate your entire evening. Venues like Semilla, the original Momofuku Ko, Torrisi, and Contra were among the early leaders of this brigade, but two of them closed, and the excellent Ko became a lot more expensive (though the bar serves a more affordable tasting).

Falansai is therefore filling in a market gap. And although New York does not suffer from a shortage of small-plates places — where patrons can effectively construct ad hoc tastings of their own — there’s something nice about a chef making all the culinary decisions, while requiring a different kind of effort on the diner’s part.

A typical fine dining meal in New York might include a small sauteed filet of fish. Naturally, Tran does something a bit different. He carefully grills three sections of bass: belly, collar, and head, brushing them in nothing but fish sauce caramel. The cranial and collar flesh are both soft and mildly sweet — you just have to navigate around all the jagged bones with your fingers — while the belly turns out more wonderfully oily and silky. A bit of silver skin is tasty in its own right, packing pleasantly fishy gelatins, and an oversized eyeball has a wonderful firmness, akin to a hard gumdrop. The fish is perfect by itself, though if you’re craving a touch of acid, pickled onions and dijonnaise on the side help cut the fats, while wrapping everything in crisp lettuce counters all the oceanic richness. For a bit of salty heat, two ramekins on the side hold tiny pools of fish sauce, one with hot long peppers, the other with incendiary Thai bird chiles. For even more crunch and tang, reach for the tiny bowl of pickles that sits on your table throughout the meal; half-moons of sweet-tart pineapple and purple ramp spears work particularly well here.

Falansai, in short, makes the diner work a bit, rather than positioning fluke or dorade in a more user-friendly boneless format atop a truffled lobster reduction. That decision makes one wonder whether a place like Le Bernardin or Brooklyn Fare, two of the city’s top seafood spots, would be even more interesting if they sometimes let diners reckon with the funkier and bonier ends of fish and crustaceans.

In case that all seems too much, Tran followed the fish-collar course one night with a small plate of fried calamari dusted with green peppercorns. Think of it as one of the world’s only squid-based palate cleansers. If a traditional tasting menu progression follows a straightforward path from lighter to richer, Tran occasionally takes a slightly more circuitous route, going from more complicated to lighter and simpler — until things get more substantial again a course or two later.

From top, counterclockwise: Bass three ways, a patron making a lettuce wrap with the fish, then that same customer adding pickled onions

Dinner might also include a bowl of briny cockles, slathered in a pile of lime-spiked seaweed butter. After you finish off all the bivalves you throw in a mound of rice to mop up the saucy dregs. Or sometimes Tran sends out a cucumber-melon salad dressed with gribenes, the heady chicken skin imparting a wild dose of poultry umami and musk to the ultraclean vegetables. He might also dust chicken liver pate with a bit of sugar and brulee it, letting the resulting sweet canopy tame the bilious tang of the organ meat underneath. You scoop it up with a rice cracker that’s electric and puckery on its own, thanks to a dusting of vinegar powder.

The chef, during a phone call, told me he once decided to make a bit of head cheese for a table he’d been chatting with. “I don’t think people would normally order beef tongue or pig’s head. That’s the benefit of the tasting menu,” he said.

Set-menu restaurants often indulge patrons with a larger piece of meat or fish at the end of a meal, as a way of saying: thanks for putting up with some of our smaller, amuse-sized courses. Falansai generally adheres to that. During an outdoor tasting, a waiter brought over a warm leg of lamb next to a cool vermicelli salad. The meat boasted a whisper of grassiness and, thanks to a five-spice rub, a wallop of warmth. During a final visit, however, Falansai went a bit more straightforward, perhaps too much so, with a giant dry-aged pork chop; the table next to me had better luck with yakitori chicken thighs, gizzards, and hearts (that poultry preparation required at least two diners, and I was alone). The kitchen did its best to jazz up the sleepy swine, topping it with fragrant coconut cream and pairing it with a duck fat-laced chile crisp XO that just might be the spiciest condiment I’ve encountered at a fine dining spot.

The end of the meal comes quickly after the main is cleared. You simply receive a small jar of pandan chia pudding. A few slices of sweet jackfruit sit on top, adding a touch of sugar to the restrained, coconut-y custard. Over two tastings, it was the only dish repeated, and quite frankly I wouldn’t be opposed to encountering it again. There are no petits fours, cheese plates, or bespoke jars of granola to take home. And no one prints your personalized dinner menus onto the kind of fancy paper that would bankrupt your family if you used it for wedding invitations. That said, I did bump into that nice big dog on the way out one night, which is about as perfect a parting gift as one might encounter anywhere. 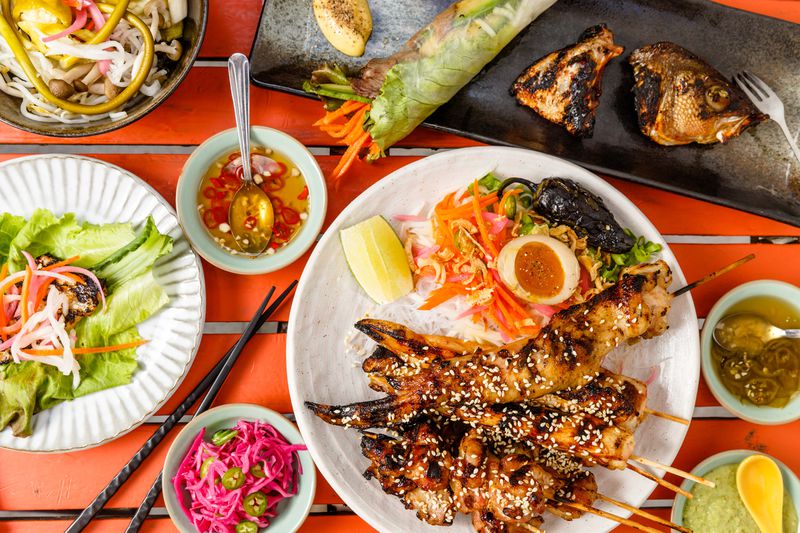