L’industrie 2.0 Is a Bigger, Better, Yet Still Affordable Slice Shop

Share All sharing options for: L’industrie 2.0 Is a Bigger, Better, Yet Still Affordable Slice Shop

Review and information for L'Industrie Pizzeria

The heralded L’industrie Pizzeria in Williamsburg underwent a major transformation in April when it expanded into the space next door, debuting an indoor kitchen counter and a sprawling outdoor dining area. In a culinary sense, however, the move wasn’t so drastic. The lean venue still shuns mainstays of other pizzerias; there are no appetizers, crisp salads, fancy mains, al dente pastas, or eggplant Parms. On Wednesdays only, the team sells sandwiches, though there is only one variety, often revealed on Instagram that day. The only regular dessert — a new offering — is soft serve. When I asked owner Massimo Laveglia why he doesn’t abide by the pie-only philosophy of so many of his peers, his answer betrayed L’industrie’s larger philosophy quite succinctly: “We’re not a restaurant ... we’re a slice spot.”

Indeed, his slices (sometimes) rank among the city’s finest, with at least 10 different varieties available on any given day, including a particularly compelling — it pains me to say this — truffle slice. Each one, cut into triangles, runs $3.50-$6; a full meal will cost about $15. Perhaps you’re in the loop about all this already? Those who have been patronizing L’industrie since its debut in 2017, when it occupied just 250 square feet, have tended to be vocal about their positive opinions; the venue has also landed on a few best-of lists over the years. On a particularly busy Friday evening, a small line snaked out the door while a T-shirt-wearing crowd sipped cloudy BYO red wines the hue of diluted cranberry juice. They also ate lots of pizza.

L’industrie’s ethos, as is the case at Scarr’s, F&F, and Paulie Gee’s, centers around riffing on classic New York-style pies, that ubiquitous local breed whose doughy chew can channel mochi and whose neon oils sometimes evoke orange Hi-C. Laveglia, like many of his peers in the haute-slice market, deploys natural fermentation and high-hydration techniques for a lighter and crisper pizza. What sets L’industrie apart, however, is its ultra-thin crust — barely thicker than matzo — and the sheer breadth of its offerings. He sends out slices topped with fig jam and bacon, spicy salami, prosciutto, some of the best pepperoni I’ve encountered recently, and white splotches of creamy burrata. What’s particularly intriguing about the burrata slice is the hot-cold temperature contrast. The rich dairy remains cool as it melts into small puddles over the warm, Bianco DiNapoli tomato sauce. After a quick chew, the crust seems to disappear on the tongue.

L’industrie is the first place in 16 months where I’ve engaged in indoor dining for a review. Last week, Gov. Andrew Cuomo lifted all remaining restaurant restrictions as local COVID-19 vaccinations surpassed 70 percent. From a style-of-service perspective, the relaxing of capacity limits and social-distancing rules has surely benefited fine dining the most; the delicate positioning of, say, tweezered hibiscus over chrysanthemum foam doesn’t necessarily lend itself to long walks from the kitchen to an outdoor terrace. But hear me out: The return of indoor dining means a more accessible societal institution, the slice joint, can return to its true summertime glory.

Sliced pizza, to be sure, ranks among the world’s great walking foods, one that’s typically adaptable to any urban environment. Even during a rain shower, you can use the white paper bag as an ad hoc umbrella as you eat.

Still, indoor dining is a vital piece of the pizza puzzle. Part of the allure of a place like L’industrie is that it’s an affordable respite from the June heat. Friends can intermittently come and go for a cooling lunch without negotiating with the host stand (“We only seat complete parties”). You could theoretically spend a few hours here reading a book, away from the humid elements, without worrying about a waiter asking if you’d like another $12 cocktail. Before the pandemic, I wrote the bulk of my columns from inside a Hell’s Kitchen slice shop, and while takeout has been nice, it’s been even more gratifying to see tristate-area pizza parlors again become proper third places between work and home. L’industrie isn’t unique in this regard, but in a gentrified part of town that seems to get more and more exclusive by the day, the generosity of yet another slice shop goes a long way.

I’ve enjoyed sitting at one of L’industrie’s 14 stools at the wood or metal counters, inhaling the aroma of truffles and flour that permeate the air. If you stay long enough, you’ll even watch the staff gently rib patrons while calling out their orders on a loudspeaker. “Number 88, your pizza’s getting cold!” Or: “Come on Brad, you’re up.”

Something I’ve enjoyed even more is actually eating the pizza.

“I’m from Tuscany. I’m not a big fan of Neapolitan pizza — not because it’s not good, it’s just not my style,” Laveglia, a Florence native, tells me of his approach. While most round, slice joint pizzas pay homage to the traditions of Naples, Laveglia says his own style is closer to that of thin Roman pies. The inner crust, accordingly, is often no thicker than a sheet or two of construction paper, with a flavor profile that ranges from faintly tangy to sweet and buttery. The outer rim, by contrast, often exhibits a nice puffiness, with large, airy bubbles and a soft chew. At its best, the crust flaunts a flaky texture that’s only a degree removed from a good almond croissant. Sometimes, however, the rim turns out more densely chewy, while the bottom layer of crust sports unpleasant notes of burn from the electric oven.

One last thing: The kitchen dusts every slice with a handful of fresh basil (for grassiness), extra virgin olive oil (for fragrant richness), and grated Parmesan (for umami), a nice hat tip to the way the team at Di Fara on Avenue J finishes their pies.

Following are a few quick notes on the slices and the soft serve:

Margherita: This isn’t so much a classic margherita slice as a neo-New York cheese slice. To wit: The firm mozz is more about conveying saltiness than the nuances of good dairy, while the tomato saucing is minimal. When viewed through that lens, it’s quite good, especially with the dusting of Parm and the herbal sting of basil breaking up the salt. With a crust so light, one could inhale three of these in one sitting.

Anchovy: About what you’d expect, a regular margherita slice with intermittent bites that wallop you with a sucker punch of brine. Such aggressive seasoning stipulates a Goldilocks-style disclaimer: I find this level of salt exhilarating, while you might deem it too much.

Pepperoni: A cheese slice topped with Ezzo’s pepperoni cups, which pack the gentle smoke of good Calabrian chiles and a gentle kick of heat. Ask for a ricotta add-on to dampen down the salts.

Spicy salami: At less aggressive salinity and spice levels than the pepperoni, it integrates itself into the pizza more seamlessly.

Fig and bacon: Fat slices of apple bacon pair with ricotta and an ample supply of fig jam. The salty-sweet combination makes sense, but the heavy use of jam pushes things into cloying territory.

Burrata: As described above, a near-perfect slice, a study in cool cream taking the edge off tart tomato sauce.

Truffle: A white slice topped with salty mozz, mushrooms, and a whisper of truffle paste. Unlike certain truffle oils, which can act as a noxious cloud that obliterates every nearby flavor, the paste is more subdued; it adds just a hint of sweet perfume to the pie. The earthy mushrooms get a nice tart jolt thanks to a dose of vinegar.

Square slice: An inch-high slice that somehow weighs as much as a puff of cotton candy. It isn’t available every day, and that’s okay, because it’s still a work in progress. The crust was wonderfully crisp but the mozzarella and tomato toppings were desiccated.

Our review of L'Industrie Pizzeria 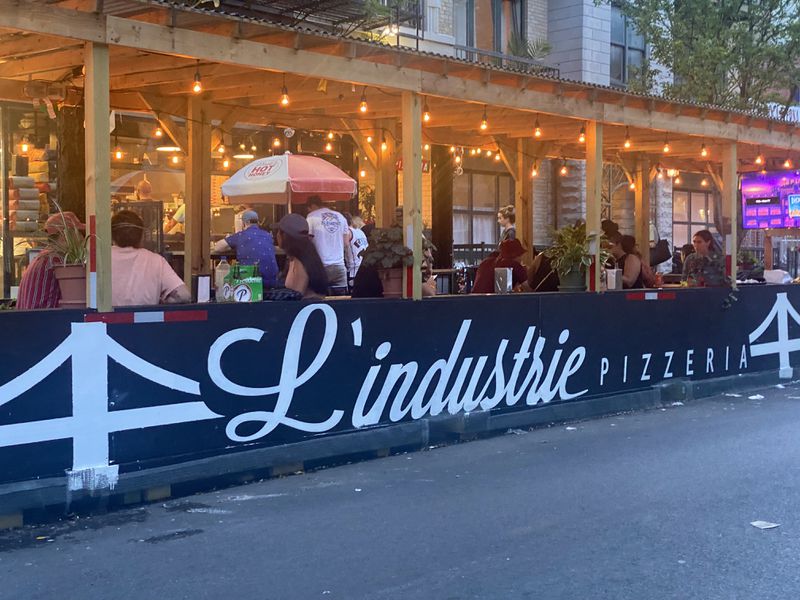 Bonus tip: To make BYO easier, L’Industrie includes a menu of wines by the bottle, all $30 or less, from Stranger Wines around the block. Patrons can scan the appropriate QR code on the menu to pick up the wines when they swing by the shop.