Review and information for Yellow Rose

At Yellow Rose, a Texas-y taqueria in the East Village, owner Krystiana Rizo and chef-owner Dave Rizo make their own semi-natural version of Cherry Coke, an effort that, at first, seems to miss the whole point of Cherry Coke. One does not consume a watermelon Jolly Rancher for the perfume of tropical fruit, an orange ice for the aroma of Florida citrus, or a jug of Kool-Aid for a cruel taste of machete-harvested Sharkleberry Fin. Consumers typically seek out these confections for their static, scientifically calibrated scents (like the much-discussed artificial banana) — and for the youthful summertime sentiments they conjure up.

But on another level, if you find yourself troubled by the stranglehold Big Food seems to have over certain flavors ingrained into the national psyche, the Yellow Rose effort will serve as a welcome reprieve. This team knows how to find success by tweaking culinary nostalgia rather than uncritically replicating it.

Krystiana, formerly of Emmy Squared, roasts sour cherries with vanilla and hibiscus over a low flame, then purees them and combines the mixture with a bit of lime and a pour of Mexican Coke. The beverage is just a shade or two darker than fuchsia. It smells like a springtime garden and tastes of honeyed fruit so powerful it’s almost tannic. The pie-filling flavors of the cherry and the pucker of lime dominate at first, before giving way to the caramel overtones of Coke and its fizzy, Lambrusco-like carbonation.

If the original Cherry Coke evokes roller-skating rinks and designer imposter perfumes, the Yellow Rose beverage channels a more specific memory for me: the time I went picking red berries in a verdant Russian forest as an 18-year-old. That is to say: It reminds me of the lushness of real fruit and where it comes from. It also calls to mind the first time I had a great vegetarian burger and thought, Gosh, this tastes more like a fast-food burger should than an actual specimen from McDonald’s. Sometimes the riff is better than the original.

The bespoke Coke pairs quite well with a bean taco, easily one of the city’s best. You’ll want to try both on premises to enjoy them at their prime, to get yourself back into our beloved restaurants, and to make a few new memories after a long 15 months.

Texas has long been teeming with globally and regionally diverse culinary traditions; what’s so exciting about Yellow Rose is that it provides a forum for two ambitious operators to toy with some of the state’s Mexican and San Antonio leanings, melding those sensibilities with modern plant-forward fare (Dave used to work at Superiority Burger), bakery delicacies, and classic Americana like Cherry Coke and sheet cake. It’s a very individual reframing of contemporary and traditional Lone Star fare, an easygoing spot where the only queso is vegan queso, a pickled-pepper-studded cashew sauce that, like many good animal-free cheeses, manages to capture the creamy tang of a fermented dairy product. It dips quite well.

Perhaps you’ve tried that queso already, having been wowed by word of mouth — along with Robert Sietsema’s early review? It’s time to come back and try a few more things, as Yellow Rose has evolved since it opened just over half a year ago. In the beginning, it was primarily a quick-service spot for excellent tacos and plastic cup cocktails in a minimally adorned style — think stewed meats, legumes, or fluffy eggs in ethereal flour tortillas, with little or no adornments. I remember this early meal, taken standing up outside the restaurant: a tart mezcal margarita paired with a heck of a bean-and-cheese taco, the pride of the owners’ hometown, San Antonio. A paste of Rancho Gordo beans, as rich as chicken liver pate, sits beneath a lattice of cheddar. The cheese, typically somewhat bland in a taco of this breed, packs so much milky piquancy it could almost qualify as chevre.

A takeout window remains, as does the Ms. Pac-Man arcade game (free to play) and the chic general store environs, with bags of artisanal dried beans for sale on the type of shelving that could just as easily carry tanned leather handbags. But as life slowly returns in the city, Yellow Rose has expanded to offer full-service indoor and outdoor dining, having transitioned to become a more mature sit-down establishment with a longer menu of composed plates, hominy powder doughnuts, hominy-powder-topped salads, barbacoa tacos every day, brain-freeze-inducing frozen margaritas, cauliflower tortas, and magically disappearing specials.

On April 14, Yellow Rose posted an Instagram photo of roasted Quarton Farm carrots, as dark as weathered logs, in mole poblano; they sat above a pile of yellow rice and below a fistful of herbs. How did they taste? I have no idea. Like the mythical “second-place chili” at Superiority Burger — that cult venue whose affordable-gourmet-messy-vegetarian junk food seems to inform half the menu here — certain dishes at Yellow Rose come and go with little notice. Indeed, the best way to keep track of new offerings is by liking every photo on the Insta account and praying that the algorithm gods put Yellow Rose’s pics high on your feed. “Will you have them tomorrow?” a commenter asked about those precious carrots. “We have them today!” was the reply.

Tortas are a lunchtime guarantee, however. Dave starts off by dabbing a generous heap of refried beans onto a house-made bolillo, a buttery griddled Mexican baguette. Onto that goes plenty of avocado, lettuce, and mayo, along with a pile of ancho-marinated cauliflower. I’d politely call it a sandwich for two — a sturdy, starchy, meat-free gutbuster that conveys nutrition, salt, fat, and spice, which is to say it does everything a porkier torta typically does. Chalupas, once an occasional special, are now on the menu every day. The kitchen toasts up corn tortillas until they taste like good popcorn, then paints on a layer of ultra-creamy beans; the cooks toss in a bit of fresh Oaxacan cheese, maybe a few strands of broccoli di cicchio, and a whisper of hot sauce. The result is a pure, crisp flavor of maize buffeted by rich dairy, earthy legumes, and tart, vaguely bitter brassica.

From top left, clockwise: Yellow Rose’s exterior, the general store interior, and a plate of tacos

Just about every dish at Yellow Rose translates well to takeout; an errant carrot that falls off a chalupa can be placed back on a disc of masa without much hassle. But since the CDC has deemed all forms of dining safe for the vaccinated, maybe consider hanging around for wait service, which debuted in late April. There are quite a few reasons to do so, but let me focus on a culinary one: The flour tortillas reach their otherworldly peak right as they’re served.

Take the bacon breakfast taco. Dave makes his San Antonio-style tortillas with Sonoran flour, salt, water, and grapeseed oil — a vegan substitute for lard. When the tortillas are fresh off the griddle, they have warm, bumpy brown splotches and flake apart like a good paratha, albeit with a bit more pleasant chewiness. The intensely eggy scrambled eggs almost seem to hover inside the wispy tortilla — no thicker than two sheets of paper — while house-smoked bacon exudes a funky, guanciale-like punch. But as the minutes go by, the dough firms up a bit and loses some of its complex, toasty nuances. The product never becomes wet and gummy as it can elsewhere, but if you’re seeking the near pinnacle of a flour tortilla, stay and dine in. Or if you do takeout, take a bite of the taco literally as you step outside.

Dinnertime tacos remain as wonderfully austere as before; meat eaters would be remiss in overlooking the carne guisada, a mess of tender chuck simmered in a chile gravy that’s as dark as pumpkin seed oil. The beefiness is almost overwhelming, but that’s what you’re here for. Unlike with an aromatic and earthy corn tortilla, the delicate sweetness of the flour lets everything come through with unabashed clarity. That’s just as true for the beef barbacoa taco, previously a Sunday-only affair. Dave slowly simmers cow cheeks in beef stock, then serves them on a tortilla with a fat slice of avocado. This one is heavier than the venue’s other, lighter, one-handed tacos. It pays to nibble at the tender meat — which tastes like beef to the power of 100 — before attempting to pick it up.

Braised wild boar — one of two mains along with the chalupas — turned out a touch dry on a recent visit; but the plate still merited its price from the other expert components: saucy braising liquids pooling around a creamy mound of grits, with oniony ramps for a sharp, seasonal sting. You pair this with a Little Gem salad, crisp greens in a piquant cashew dressing and enough dill to make the whole thing taste like a deconstructed pickle.

The doughnuts themselves are quite pillowy; they almost seem to have more in common with marshmallows than the typical American pastry. Since they’re available only on Saturdays and Sundays, weeknight patrons will have to make do with a single slab of chocolate sheet cake, a Texas throwback with a few extra tweaks. The fluffy dessert sports a few candied pecans, a hint of olive oil for savoriness, and a dose of sea salt to balance out all the sweetness. My critical sensibilities tell me it would pair well with a strong bourbon to cut through all the sugars, but my childhood birthday party preferences tell me a good Cherry Coke is the right way to go.

Our review of Yellow Rose 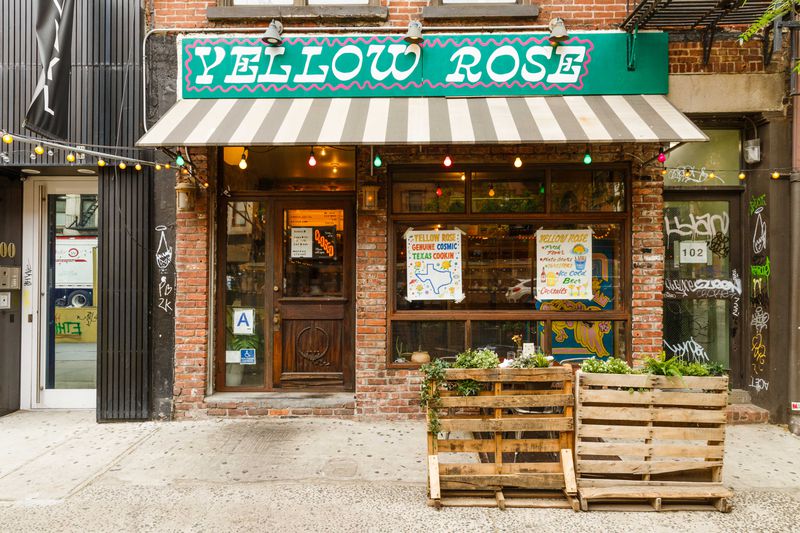 Bonus tip: Full-service indoor and outdoor dining available, with waits sometimes surpassing 45 minutes during peak hours. Breakfast — along with egg tacos and doughnuts — only available on Saturdays and Sundays. The full menu is available for takeout.