Review and information for Fat Choy

As the food world continues to mine nostalgia plays to riff on birthday cake, Italian-American fare, Pop Tarts, and other bits of quintessential and sometimes questionable Americana, the loose meat sandwich known as a sloppy joe remains relatively overlooked, at least in its classic carnivorous form. Ambitious restaurants are not bending over backward to put it on menus like they are with yet another hamburger, and no one seems to be making Manwiches, as they’re sometimes atavistically called, with Japanese wagyu or caviar. Then again, it’s quite possible that this foodstuff, which has thankfully escaped viral upscalification, is finding a more compelling reason for being outside the realm of meat — especially in a penny-pinching pandemic era where meat itself is a luxury.

In fact, if one were to ask me where to find a sloppy joe in the city, I could only name two venues off the top of my head, and neither use the signature ingredient: beef. One of those venues is Superiority Burger; it’s been around for a while. The other is Fat Choy, a stunner of a Chinese-leaning vegan spot on the Lower East Side. There, chef Justin Lee takes a fungi-forward approach to the sandwich.

Lee braises shiitakes in a porcini stock and throws in a bit of smoked tofu as well. He slathers the ragu on a homemade roll — Lee calls it a cross between an English muffin and a Chinese sesame bun — and tops it off with slaw and cilantro. The result bears an unmistakable affinity to a sloppy joe (or a South Asian pav bhaji) from a messiness perspective, but that’s about where the similarities end. Lee’s roll, for example, doesn’t exhibit the puffiness of the standard hamburger bun; rather, it’s so wonderfully chewy it pulls apart almost like mochi. The ragu, for its part, emits an earthy punch with lingering notes of five spice and cumin. And while the classic Joe doesn’t come with a garnish, the addition of slaw and cilantro here conveys notes of crunch, freshness, fragrance.

Is the “Mushroom Sloppy” a delicious sandwich in its own right? Unquestionably. But it’s all the more satisfying to see chefs take a piece of staid stateside nostalgia — which has long suffered from from a Eurocentric bent — and reinterpret it through a non-Western lens. It’s also just as satisfying to see a younger operator like Lee stay in loose conversation with the vegan and vegetarian cooking that has long thrived in nearby Chinatown (see: Vegetarian Dim Sum House and Buddha Bodai) and integrate some of those sensibilities into a more modern venue.

Lee, late of Golden Diner, isn’t vegan, but his cuisine at Fat Choy is fully plant-based in deference to his views on the environment. “We can’t sustain this world if it’s all uni and wagyu and lobster on our menus,” he tells me. He calls his cooking “kind of Chinese,” which distinguishes it from the more straightforward Chinese and Chinese-American vegan fare at, say, Spicy Moon in the East and West Villages, which replicates classics like crab Rangoon and mapo tofu — sometimes with the help of Beyond Beef, a Los Angeles-based vegan meat company.

Fat Choy, by contrast, aims for looser and more freewheeling creativity, without leaning as heavily on tradition — and without going the fake meat route of bovine or porcine verisimilitude. “Science is great; that’s just not for us,” Lee says of the current crop of mass-produced vegan meats, adding that he prefers to work with his own produce folks and farmers rather than use an item that simply acts as a 1-to-1 substitute for beef.

Or put more simply: Like at Dirt Candy or Superiority Burger, the vegetables at Fat Choy tend to taste like vegetables, and excellent ones at that. Whether they taste like actual Chinese or American classics is a different matter. Bok choy, for example, doesn’t veer too far from a typical Cantonese preparation. The kitchen douses the wilted cabbage in something they call “tasty brown sauce,” a soy-based concoction that mimics the umami-rich flavors of oyster sauce. Lee also throws in a bit of pickled garlic for aromatic tang.

The preparation known as yi mien typically involves wok frying egg noodles with pea shoots and other ingredients. Since eggs don’t tend to meld with vegan sensibilities, Lee takes a parallel approach to longevity noodles, as they’re often called. He boils store-bought Shanghai noodles until they’re overcooked, then deep fries them in a vat of Spanish olive oil. He says the frying creates a stretchy, toothsome mouthfeel, while a dose of fermented tofu provides a bit of pleasant funk.

In certain cases, however, Fat Choy’s scope of interest goes well beyond the Chinese mainland. As a special, Lee once offered a golden “crab” curry in collaboration with the Golden Diner team, using coconut milk and carrots to create a velvety mouthfeel and adding cumin, fennel seeds, and jalapenos for warming heat. To imitate the texture of crab, the chef deployed lion’s mane mushrooms, whose petals mimicked the slippery texture of sweet crustacean flesh. One could argue the dish evokes a shellfish curry from India or Singapore, though Lee simply says he was riffing on a crab bisque.

A dish of greens and beans moves even closer toward the realm of freely associative ingenuity, functioning as an outstanding Chinese-American ode to Lee’s Virginia upbringing. The chef cooks up kidney beans and collards with a bevy of onions, ginger scallion sauce, and fermented tofu. The delicacy arrives as a boxed casserole of sorts, with a layer of soft rice hidden under the legumes and brassica, which, in turn, is almost invisible under a forest canopy’s worth of cilantro. The combination of scallion sauce and salty collards somehow manages to convey the MSG-style savoriness that you get from a ham-friendly version of this dish, while the shower of cilantro brightens up the entire affair with a bright, grassy punch.

Lee is far from the first modern chef to take a syncretic, multicultural approach to modern Sinosphere fare; Simone Tong is currently doing fine work on that front at Silver Apricot in the West Village. Fat Choy is simply taking that progressive, innovative style of Chinese-leaning cooking and fusing it with the city’s vegan zeitgeist. A lifestyle free of animal products, of course, seems to be gaining more and more cultural capital in the pandemic era, especially as journalistic accounts highlight poor working conditions at meatpacking plants — and as coronavirus-related unemployment sends both chefs and consumers across the city searching for more accessible sources of delicious nourishment.

Lee told me prices “absolutely” played a role in his decision not to use animal products at Fat Choy, specifically in the sense that the vegan setup allows him to keep the cost of dining out more affordable and to attract a daily customer. Indeed, there’s something nice about paying $10 for a distinctive sloppy joe versus $20 for a burger that doesn’t substantially differ from the next one over. It also feels historically fitting that a sandwich that functioned as a way to stretch hamburger meat in the early 20th century is finding a new life in the vegan realm for similar economic reasons.

If a party of three ordered Fat Choy’s entire menu — currently eight items — plus two specials and three beers, they wouldn’t spend more than $120 after tax and tip. That works out to about $40 per person, which isn’t quite everyday territory for most folks but still more affordable than most sit-down dinners.

For a quicker, cheaper snack, order the $6 rice dumplings. Fat Choy stuffs rectangular parcels of dough with leftover collards before steaming, pan frying, and dousing them in chile crisp. The cooking imparts a wonderfully bouncy QQ texture that’s simultaneously crisp yet stretchy, while the crimson chile oil leaves a pleasant buzz on one’s tongue. Rice rolls, by contrast, are a more sedate affair, a few soft globules of dough that add nourishing starchiness to a salty pile of black vinegar-laced scallions. Fried cauliflower is great too, highlighting the citrusy crunch of the florets while also acting as a fine conduit for a bright and creamy shallot sauce.

Lee sometimes offers a coconut rice pudding for dessert; it hasn’t been on tap during my visits, so I had to make do with a yeasted chocolate doughnut. It is an exceedingly unsweet effort, with the pastry exhibiting the savoriness of a youtiao cruller. Even a small ramekin of coconut-pandan jam provides little more than a whisper of sugar. The confection is as much of a hat tip to nearby Chinese bakeries as it is to the city’s modern pastry scene. Whatever the point of reference, the doughnut is quite delicious.

Our review of Fat Choy 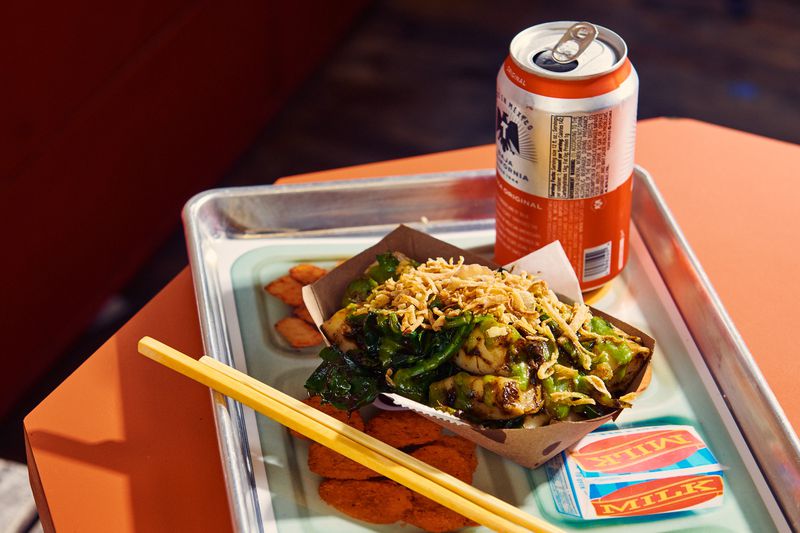