Review and information for The Migrant Kitchen

In her acclaimed Zaitoun cookbook, author Yasmin Khan calls sheikh el mahshi the “king of Palestinian stuffed vegetables” — before going on to recount the difficulties of filling “comically tiny zucchini” with lamb and spices. Likewise, the three co-authors of Falastin expound on the celebratory role of stuffed vegetables in Palestinian cuisine, with the arduous cutting and coring often handled as a group activity. Their own recipe for mahshi — which can refer to any number of rice- or meat-filled veggies across former Ottoman territories — is for turkey-stuffed turnips. Sounds delicious.

Then, there is the Ramallah-born Nasser Jaber, the chef and philanthropist behind the Arab-Latin Migrant Kitchen in the Financial District. I ask Jaber about his experiences growing up eating mahshi in the West Bank, to which he replies, “You’re going to laugh; I hate mahshi.”

It was not the answer one would expect from someone who serves an excellent — albeit wildly freewheeling — version of that dish. “My mom used to punish me by making me roll them,” he said with a chuckle. Indeed, the chef has found a simpler item to stuff, a maduro, a pastelón-esque hat tip to the Dominican Republic’s sizable Middle Eastern population.

The kitchen deep-fries a plantain until it takes on a caramelized hue, then splits open the top like a hot dog bun and fills the fruit with ground lamb. The flesh of the plantain yields easily to the weight of a fork; as you cut into it, a crumble of meat spills out. Tropical sugars hit the palate first, then the starchiness of the fruit takes over as you chew, followed by the salty, umami-laden kick of the charred lamb, which packs the warming flavors of ras el hanout. A patterned squirt of labneh — think Friendly’s circa 1990 — gives the whole creation the air of a savory banana split, which this divine creation effectively is. It’s also such a thoughtful ode to a classic that I secretly believe Jaber doesn’t hate mahshi after all.

Just as maduros aren’t the first thing that come to mind on the subject of mahshi, Middle Eastern-Latin fare isn’t necessarily what one might expect to encounter on Stone Street. Run-of-the-mill pub grub, pizza, and steaks generally serve as the chief culinary offerings on this pedestrian-only stretch of the city, a de facto biergarten cobbled together from a variety of establishments like Adrienne’s, Ulysses, and Underdog. Even pre-COVID, Stone Street long functioned as one of the city’s most notable outdoor drinking and dining emporiums, a place to sip draft beers in the late afternoon sun while eavesdropping on banker bros on first dates.

Migrant Kitchen tweaks the Stone Street experience — which largely leans on a stereotypically white vision of bars — by making things decidedly less European and a heck of a lot more culinary. Jaber, along with ex-Ilili chef Dan Dorado (a native Los Angeleno born to Mexican parents) and chef Lisselly Brito (a Dominican-born New Yorker), has gifted the city with a very good philanthropically minded venue, serving a style of Latin-Middle Eastern fusion that it is whimsical but simple, creative, and sometimes irreverent.

Rather than recreate, say, porky tacos Arabes — a Lebanese-leaning staple of Mexican cuisine — Jaber goes for something a bit more haram with his shawarma: He stuffs it with shredded and smoked carnitas in the style of American barbecue. Yes, the chef sells dive bar-style nachos; this is Stone Street, after all. But in place of crunchy tortillas, Jaber opts for mandoline-thin plantain chips, which he showers with black beans, jalapenos, gooey mozzarella, and succulent bits of lamb shoulder. And in a more complicated gastronomic feat, he dusts chicken thighs with sumac, fries them to the color of polished mahogany, and places them over airy falafel waffles. I’m pleased to report the waffles, which soak up the chicken fat and grease with aplomb, actually taste more like waffles than falafel.

Jaber, true to his background in refugee relief, hires folks who don’t normally qualify for unemployment benefits and migrant workers; he pays hourly employees $20 to $25 per hour. He also draws upon their experiences to inspire the venue’s cooking. Precisely where that cooking occurs and where the Migrant Kitchen is located is a more complicated, “What is the Matrix,” question, however.

If you walk around Stone Street, you will see no storefront reading “Migrant Kitchen.” So here’s some clarity: For outdoor yurt dining, head to the Cauldron, where Migrant Kitchen is currently the exclusive food supplier. Also keep in mind that the Cauldron will try to get you to reserve a $120 potion-making class while booking.

This is where things get trickier. If you order Migrant Kitchen takeout, do not go to the Cauldron; go to the Dubliner next door. Walk down a flight of stairs to the basement, then knock on a windowless, speakeasy-style door and state your business. A chef will retrieve your food.

That’s technically all there is to it, though if you’re looking for a more expansive understanding of Migrant Kitchen, it’s worth noting that you’re eating Jaber’s food if you dine at the Dubliner. Jaber recently talked his way into upgrading that venue’s menu to include organic chicken wings, kale salads, and Irish chimichurri butter for the steak frites.

Then again, for an even broader look at the Migrant Kitchen, one must look beyond the confines of Stone Street and into the realm of citywide charity, where Jaber is a growing player.

The intersection of philanthropy and restaurant culture is not new. High-profile chefs like Daniel Boulud and Éric Ripert have long advocated for hunger relief through organizations like Citymeals on Wheels and City Harvest, respectively, while chef José Andrés, through his World Central Kitchen, has brought targeted food aid to humanitarian disaster zones since 2010. During the pandemic and last summer’s demonstrations against police violence, however, scores of smaller-scale operators — many through the decentralized Bakers Against Racism network — successfully championed a variety of causes, often leveraging social media followings on Instagram to raise funds, either directly or through the proceeds of online pop-ups.

What distinguishes Jaber’s own work on food insecurity is how many different models of engagement and giving he relies upon. Migrant Kitchen runs a for-profit catering business, which has contracted with Mayor Bill de Blasio’s “Get Food” campaign to provide meals to hungry New Yorkers during COVID; much of those meals are halal for Muslim communities. Jaber also has an Andres-style philanthropic arm — partially funded by profits from the city catering deal — that sends out 1,000 free meals a day through a production kitchen. That team is currently partnering with council member Adrienne Adams to serve rice and beans and jerk chicken to the Caribbean community in Jamaica, Queens.

And then the Stone Street location employs the partial-proceeds model, donating a meal for every $12 a consumer spends. That method, like the social media bake sales, is particularly intriguing because it makes everyday acts of consumption — versus, say, spending $2,500 on a benefit dinner — an explicit node in the philanthropy lifecycle.

Inasmuch as food sales fuel Migrant Kitchen’s charitable causes, it also doesn’t hurt that the Middle Eastern-Latin fare happens to be damn good. Accordingly, here’s a quick rundown of what to order.

Empanadas: Filled with shredded lamb, chicken, or jackfruit. The exteriors flake easily, while the warm interiors, in the case of the lamb and chicken, pack heady, gamey tangs. A thimble of habanero sauce on the side quells the funk. The tart jackfruit tinga, by contrast, is perfect in its own right, exuding an intrinsic meatiness with notes of chile, sumac, and Aleppo pepper.

Street corn: Two variants on the classic elotes. For the Mexican version, Jaber slathers smoked corn on the cob with chile butter, cotija cheese, and citrus aioli. The cotija seems to exude a saltier, funkier punch than it does elsewhere — a nice touch that adds complexity to the corn’s straightforward sweetness. For a Middle Eastern riff, the chef deploys a thick coating of labneh to tame the corn’s sugars, and throws in pickled onions for brightness.

Shawarma: Slow-roasted carnitas with carrots in a pita. Again, the tweak here is a touch obvious; Jaber switches out the lamb in shawarma for pork, like with tacos arabes. But the first bite reveals an extra level of nuance: The chef has smoked the swine, imparting a vaguely sweet, woodsy aroma. Pickled onions keep any fattiness in check, while strategic doses of mint liven everything up with a verdant, vernal perfume. Also available with cauliflower instead of pork.

Lamb torta: A generous portion of lamb shoulder comes piled on soft bread with avocado and pickled vegetables. It tastes precisely like it sounds: indulgent.

Nachos: Crisp lamb shoulder, jalapenos, mozzarella, tomatoes, and black beans piled high on plantain chips. They’re like any other nachos in that they act as an affordable kitchen-sink meal of salty, spicy, meaty condiments. The only real difference is the base: a pile of vegetal mariquitas instead of earthy corn chips.

Mahshi: Lamb stuffed into a maduro with labneh and cilantro. It is a perfect dish, even when things cool back down to room temperature after being hauled home on the subway.

Chicken and waffles: Cassava-breaded, sumac-dusted thigh meat that’s been fried and placed over falafel waffles. The sumac counterbalances the fattiness of the meat with a pungent, lemony kick, while florets of pickled cauliflower amp up the tartness factor even further. Keep in mind that the waffles underneath don’t sport the dense crispness of proper falafel; the chickpea flour and spices simply give the treat a savory finish.

Our review of The Migrant Kitchen 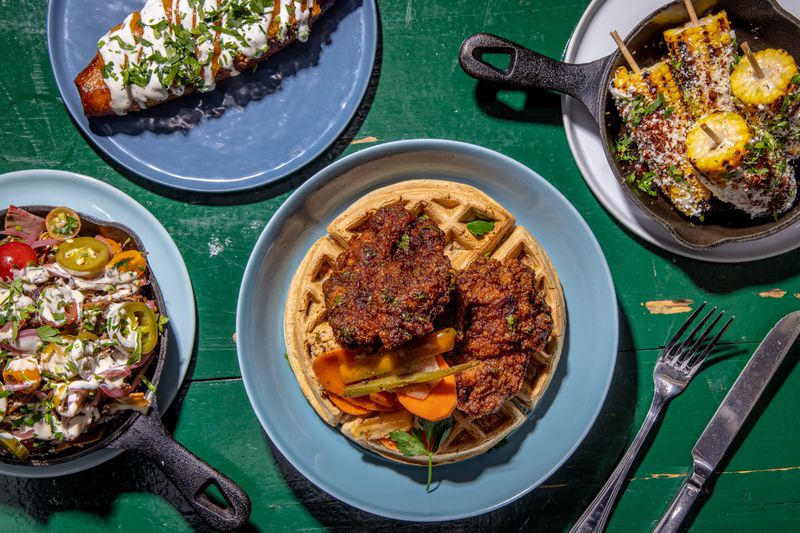 Bonus tip: Sit-down snowglobe dining at the Cauldron is often booked up, and those folks don’t always pick up their phones. Non-yurt seats with (not very warm) heaters are available for walk-ins.