Share All sharing options for: Trailblazing Palestinian Restaurant Tanoreen Is Still a Hit

Review and information for Tanoreen

To fully appreciate the walnut-packed peppers at Tanoreen, a 23-year-old Middle Eastern spot in Bay Ridge, it’s worth contemplating the wonders of stuffed vegetables throughout Palestine and the greater Levant. Cooks from the region fill grape leaves with mounds of rice for dolmas, tiny gourds with more rice and sometimes ground lamb for mahshi, and eggplants with nuts and garlic for makdous — a stellar way to preserve aubergines for wintertime eating.

Tanoreen’s chef-owner Rawia Bishara has long offered tart eggplant makdous, in line with her homestyle approach to Palestinian cooking, but she also does something different. She takes crushed walnuts, harissa, and red peppers, then crams the mixture into cored-out jalapenos and poblanos. Jumana, Bishara’s daughter and general manager of the restaurant, attributes the dish’s inspiration to chile rellenos and the Mexican cooks who have long helped run Tanoreen’s kitchen.

The peppers marinate for a week before Rawia slices them into fat coins, letting the tan interior contrast with the verdant exterior. The sour punch of the jalapeno is startling, more so than with an average cucumber pickle; this is the gastronomic equivalent of drinking kombucha while taking a cold shower. A touch of heat from the pepper ensues, as does a profound hit of earthiness from the walnuts. As far as I can tell, there is no makdous like it anywhere else in the city, an expression of Mediterranean sensibilities by way of the Southwest, all done in a manner that screams New York City.

Tanoreen, in case you were wondering, is still a heck of a restaurant in its third decade of existence.

Palestinian cooking — whose traditions overlap with those of neighboring Syria, Jordan, and Lebanon — has received a jolt in recent years from newcomers like Tarek Daka’s modern Qanoon in Chelsea, Ayat Masoud and Abdul Elenani’s Ayat in Bay Ridge, and most recently, the pistachio-and-cheese flatbread-slinging Al Badawi in Brooklyn Heights.

Tanoreen has been around a bit longer, whipping up lemony hummus since the late 20th century. Bishara, a Palestinian who grew up in Nazareth, Israel, opened the venue as a small Brooklyn storefront in 1998, before taking on her daughter as a partner and expanding to the commodious corner space on 76th Street and Third Avenue in 2009. The accolades that followed — there’s been a James Beard Foundation semifinalist recognition, a New York Times review, and a Bon Appétit writeup — combined with the overall quality of the food helped set the stage for the city’s surge in Palestinian establishments.

More practically, however, Tanoreen continues to draw in not just neighborhood denizens but diners from Westchester, Long Island, and elsewhere for ambitious dishes whose carefully calibrated spices and cooking techniques keep pace with those of its younger peers receiving the lion’s share of the attention. Its occasional innovations — like the jalapeno makdous — and a deep bench of desserts further cement its status as a lynchpin of the city’s Middle Eastern culinary scene.

On a recent Saturday night, as a nearby sports bar sat empty, Tanoreen buzzed with a lively, socially distanced crowd. Patrons in the heated outdoor area feasted on lahmajin: ground lamb, lemon juice, and tamarind paste on firm taboon flatbread, a meaty pizza with as much racy lemon juice as a properly dressed salad.

Inside the restaurant, candle-laden chandeliers cast a warm glow over red banquettes, fuchsia-colored pickled turnips, and waiters typing in orders on personal tablets. Bishara herself worked the dining room, checking in on regulars and newcomers. Jumana says Paycheck Protection Program loans and nearly $327,000 in Restaurant Revitalization Fund grants helped Tanoreen stay afloat during the pandemic — as did a brisk takeout business, thanks in no small part to a reliable client base.

Bay Ridge, known to some for an Italian-leaning 1970s dance flick, still boasts scores of Irish pubs and Republican-leaning voters. But the neighborhood also hosts the city’s highest concentration of Arabic-speakers, with halal butchers, Middle Eastern grocers, and Yemeni coffee shops dotting the streets; down the block at Ayat, a colorful mural calls for peace, and for an end to the Israeli occupation. The Palestinians are still, like the Uyghurs and Kurds, a people without an internationally recognized and independent country. Here in Brooklyn, many have taken to calling this slice of Kings County “Little Palestine.”

Tanoreen occasionally experiments with more modern preparations. The menu advertises a pomegranate-sauced cauliflower steak, introduced a few years back, while a server on a recent evening tried pushing a trio of clubstaurant-y filet mignon shawarma sliders our way. I prefer the Gaza specialty that is butternut squash and lentil stew, a sweet, orange mash that smacks of warming cinnamon.

The kitchen also whips up a very good muhammara, a staple spread from Syria that blends walnuts, red peppers, and pomegranates. Since the dish pops up quite a bit around town, here’s a quick side-by-side comparison: Ayat concocts this classic in a smooth and umami-rich way that smacks of tomatoes; it could easily function as a pasta sauce. Qanoon, in turn, makes theirs with enough electric acidity to power a small generator. At Tanoreen, the muhammara is coarser and leans into the sweetness of the pomegranate and the crunch of the almonds; the tang is more of a background note.

Grilled items — ground lamb sausage, chicken thigh, lamb cubes — get the job done about as respectfully as at any kebab shop, with smartly rendered fats, cumin scents, and tender chunks of mildly gamey meats. A smarter order, however, is the whole fish. The kitchen fries red snappers in an ultra-light batter, resulting in a puffy exterior that sometimes approaches a chicharron-level of oceanic crunch. You dip that crackly skin into nutty parsley-tahini sauce, and do the same with the (occasionally dry) flesh, which peels off the bones with preternatural ease, as if the fish was born sliced.

One would also be remiss in overlooking the fetti, a layered dish of yogurt, rice, coriander, pita chips, chicken, and mlookhia — an astringent leafy green. Bishara purees the vegetable as finely as creamed spinach, Lebanese-style; it enrobes piles of shredded poultry and rice in such a way that the dish looks like a miniature chain of moss-hued mountains. The mixture is smooth on the tongue and packs a mix of fragrant bitterness and sourness, while the pita imparts crunch.

Dessert could merit a separate trip in its own right. The menu states that a small kanafeh ($16) feeds up to three people; I’d say it’s enough for up to four. Tanoreen makes a pitch-perfect rendition, wrapping fresh cheese in kataifi, baking it until the shredded phyllo turns golden, and then dousing the entire thing in orange blossom-scented syrup. A server slices and serves it tableside to show off the interior’s lengthy stretch. The kanafeh oozes and crunches and packs enough sweetness to obviate the need for sugar in an accompanying glass of mint tea.

Indeed, sweetness is in no short supply here. Baklava, imported from Shatila Bakery in Dearborn, Michigan, flaunts a texture that’s akin to biting down on crisp autumn leaves slicked with butter and sugar. For something a bit less common, the kitchen also offers date cookies ($12), a blend of walnuts, fruit, anise seeds, sesame, and olive oil. The treats function as a wonderfully crumbly delivery mechanism for a bitter punch of fennel.

Sahlab ($10) doesn’t make its way onto too many menus either, though at Tanoreen it takes the form of a plated custard, rather than the tougher-to-find drinkable version. Bishara adds the requisite dose of mastic for a vague whiff of pine, a scattering of pistachios for texture, and a pool of rosewater for perfume. Yet those are all background notes to the custard itself, whose chilly dairy flavors soothe your stomach after a long, pickle-strewn meal. It’s all enough to make one hope the owners might open up a chain of Middle Eastern sweet shops, daytime cafes where one could swing by for coffee and their excellent chocolate harissa — a semolina coconut cake that’s effectively a dense, chewy, and fragrant Palestinian brownie. Then again, Tanoreen already functions as a proper dessert parlor — on top of everything else — so I’d say the Bisharas have things figured out pretty well. 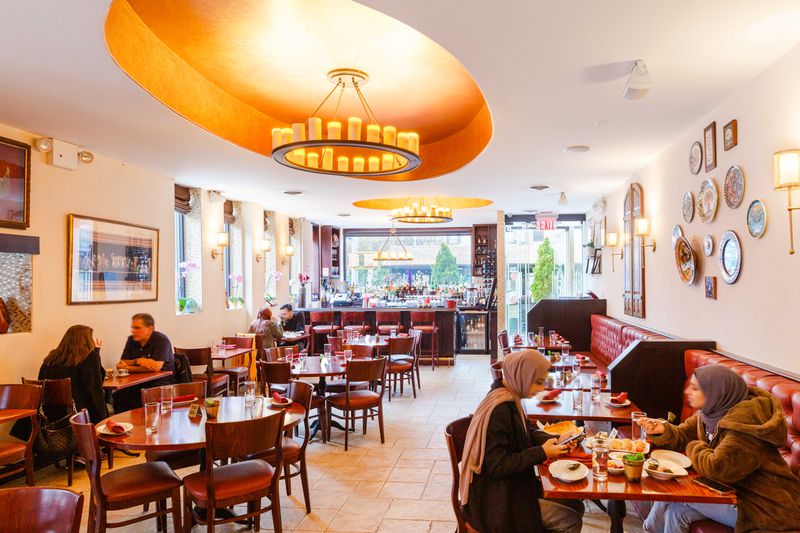 Bonus tip: The bulk of the menu is available for local takeout and delivery via the restaurant’s website. Nationwide shipping available for select items on Goldbelly when available.