Sushi on Me Is a Raucous, All-You-Can-Drink, Cash-Only Party

Share All sharing options for: Sushi on Me Is a Raucous, All-You-Can-Drink, Cash-Only Party

Review and information for Sushi On Me

To refer to Sushi on Me as yet another exclusive omakase restaurant would be as nonsensical as writing off the rapper Common as yet another Oscar-winning performer. Just as the critically acclaimed hip-hop artist is also a producer and an actor with too many roles to list — an Italian-speaking security chief in John Wick 2, a loose cannon in Terminator: Salvation — Sushi on Me doesn’t fit into the typical framework of an ambitious Japanese tasting-menu spot. Better to think of the Queens venue as something quite different: a free-wheeling, expletive-laden, booze-fueled house party that happens to serve luxurious raw fish over rice.

In a city overrun by sushi parlors that will trigger a large purchase alert on your credit card, Sushi on Me on the Jackson Heights-Elmhurst border is a more affordable hangout where the only currency accepted is cash. It’s also a live-jazz club that simultaneously channels the energy of a Meatpacking District clubstaurant and the warmth of an Irish bar. And it’s a Thai-inflected counter spot where the chefs almost seem to drink as much as the patrons, which is a serious feat since a bottomless sake policy means the diners themselves drink more than they eat. The flat fee for all this is $89, though that’s before you tip the staff, before you leave $20 for the piano player, and minus any fees charged by your banking institution for using the bodega ATM across the street.

To put things more bluntly: No one comes here just for the sushi, so allow me to pass along some of the things I experienced at this upstanding venue. As promised, there will be cursing:

“Enjoy your fucking dinner” — the actual sign outside the unmarked restaurant.

“Like the sign outside says, enjoy your fucking sushi” — Atip “Palm” Tangjantuk, the Thailand-born chef, formally announcing the onset of dinner service. Many of the top sushi chefs are economical with their words and lead dinner service in such a way that centers the food and not themselves. Tangjantuk, by contrast, likes to shout, particularly when deploying four-letter words.

“Other places call it fatty tuna; here it’s called fucking fatty tuna” — the chef, again. The dining room erupts in cheers. Tangjantuk works the room like a confident DJ who knows when to drop the bass.

“The shit that was on this spoon...” — a very loud patron with a goatee, having lost his train of thought after taking a bite of the aforementioned fatty tuna. His companion jumped in to help complete the sentence: “It was stupid good.” The spoon contained a light mash of toro with sea urchin. It tasted like a soft porridge of the ocean.

“We’re going to get high together” — the chef, who smokes a bite of salmon in front of you with some rosemary and possibly, ahem, something else. The acrid haze that fills the room doesn’t smell like something one would want to eat, but the sweet-salty tamarind sauce and shallots — a loose riff on miang kam leaf wraps — saves the dish.

“Hey, Serpico, stop trying to steal my girl” — the guy with the goatee again, shouting across the counter while I was talking to a digital producer for a daytime talk show, who was celebrating a milestone birthday with her family.

“Is anyone driving tonight?” — the chefs, after announcing the all-you-can-drink sake policy. Everyone shakes their heads, including a guy from Long Island who later admitted he downed at least 10 shots by the time dinner was over.

“Boss” — the inscription on a cup that one of the chefs is drinking from. It is filled with Budweiser.

“Our motto is drink first, eat later” — the chef, effectively doing away with the conventional wisdom that one should eat sushi, especially handrolls, mere seconds after the kitchen prepares it. The inevitable result is mildly soggy nori wraps, and quite frankly that’s okay.

If New York’s more regal sushi dens are rigid institutions where well-heeled patrons come to pray to bluefin toro — and flaunt their connoisseurship in ways that can range from benign to obnoxious — Sushi on Me is a vibrant speakeasy, a de facto private event in a wood-paneled Queens basement for a dozen people at a time. There are four seatings per night, seven nights a week. Every patron eats at the long bar. Dinner begins with a few sashimi courses and finishes with 12 pieces of nigiri, served one at a time. Roughly one hour after your meal begins, you pay the bill and make room for the next group.

Other outlets have adopted the dressed-down omakase model before. Both Sushi on Jones and Sushi by Bou — for whom Tangjantuk worked — serve quick, sub-$100 experiences. Still, none of those venues manage to explode with the communal conviviality of this Queens space, an experience akin to a bunch of strangers rooting for the Yankees at a packed pub before heading off into the night on their separate paths.

Alcohol helps lubricate the social interactions. Servers refill your shot glass with such speed and discipline it’s hard to notice if you’ve taken a sip at all. They do not tell you any stories about the sake producers or the guy who polishes each grain of rice. They do, however, tell you when to toast and clink glasses with strangers, which occurs approximately every five minutes, with folks who are sitting closer to you than passengers on the F train.

Early on in the meal, a server might place a raw shrimp in a small ramekin. The shiro ebi exhibits a hint of sweetness and a texture not unlike that of a ripe, unpeeled grape. It sits in a sauce that screams of nuttiness, though you can’t quite make out the staffer’s description of the sesame ponzu because he’s competing with the live entertainment.

While most modern sushi spots strip things down so there is little to distract you from the exorbitant fish, the Sushi on Me crew sometimes hires a 1920s jazz trio — who like to rock out with a small, rickety trumpet that sounds like a kazoo — to accompany your meal. This all brings up an understandable question: How good is the sushi? The answer is: Sometimes it’s quite good and sometimes it’s just okay.

Clockwise from top right: A photographing their dinner, a chef serving sushi, a piece of fatty tuna with caviar.

At Sushi on Me, one won’t necessarily encounter beads of rice that reach their omakase apotheosis. They don’t quite roll around on the tongue like delicate salmon roe, as at fancier institutions. The rice also doesn’t always pack a Goldilocks level of seasoning; on one occasion the grains were quite bland. But on other evenings everything comes into focus, with distinct, lightly vinegared rice cutting through the richness of tuna belly.

A scallop pops with a firm oceanic sweetness, and then seems to dissolve on the tongue like soft meringue. A slice of springy sea bass zings the tongue with lime zest that’s almost tropical in its aroma. A sprinkling of yuzu and truffle salt (barely) offsets the luscious oils of salmon belly, while a dab of chile-garlic sauce amps up the natural umami and drippy fats of seared white tuna.

One note: Things tend to taste better when chef Tangjantuk does the cooking himself, which he usually does. During my first visit one of the chefs handed the blowtorch to a patron who went overboard for about 30 seconds on everyone’s tuna.

The final piece is likely to be a medium-sized handroll. The nori wrap boasts a delicate crispness, while the toro and barbecued eel inside almost seem to melt over the rice like butter and jam over toast.

Uni wraps exhibited limp nori each time I sampled them, but the Hokkaido urchin still packed the sugars and silkiness of a veritable maritime panna cotta. Just as the magic of sushi is about finding communion in ingredients that rise above the sum of their sometimes austere parts, dinner here is about more than rigid technicals; it’s about devouring that imperfect hand roll while the vocalist known as Miss Maybell stands near the back of the room and croons on about “Minnie the Mermaid” and her “seaweed bungalow.”

Shortly after the ritual renditions of “Happy Birthday” one night — always somewhat of a guarantee here — that guy with the goatee made his move, walking over to the producer sitting next to me to chat about his Instagram count and suggest a DM would be forthcoming. “No pressure,” he added. That young professional, who said she fell ill with COVID-19 in the spring of 2020, told me she hadn’t dined indoors much over the past year. She also declared it the best sushi of her life.

On another evening, a couple from around the block said it was their first time inside a restaurant in over 16 months. It was a heck of a thing, spending this sliver of an evening chatting with folks I didn’t know, not just because this slice of Queens once sat near the epicenter of the pandemic, but because this was the type of camaraderie one might expect from a neighborhood tavern. To foster this type of jovial — maybe sometimes too jovial — environment at a tasting-menu spot is a feat in and of itself, and certainly one that’s as praiseworthy as nailing a perfect piece of nigiri.

Our review of Sushi On Me 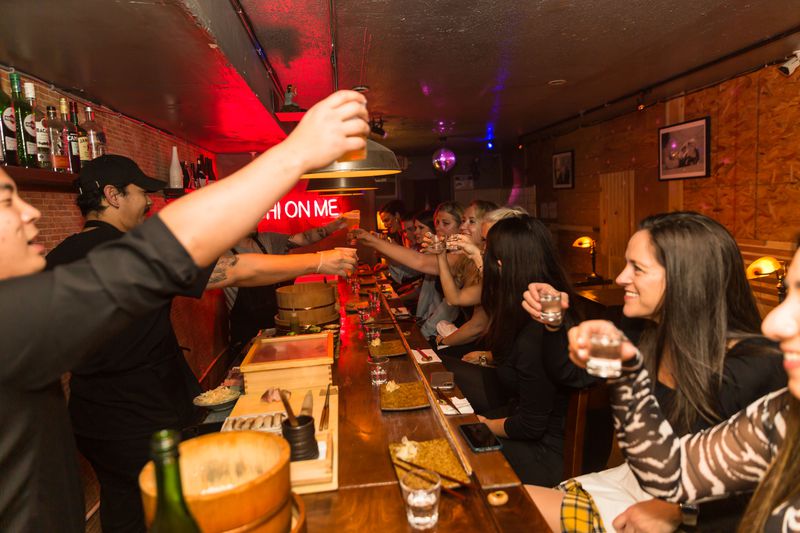 Cost: $89 before tax and gratuity; cash-only. The set menu price is reflective of all-you-can-drink sake.

Bonus tip: Reservations currently available about two-months out on OpenTable. At the time of publication same-week bookings show limited availability for two; same-day or same-week reservations for one are often easier to come by.