Taqueria Ramirez Is Winning Over Brooklyn With Funky, Blowtorched Tacos

Share All sharing options for: Taqueria Ramirez Is Winning Over Brooklyn With Funky, Blowtorched Tacos

Review and information for Taqueria Ramirez

Inside a Greenpoint room with less square footage than a midsized U-Haul, cooks watch over a bubbling cauldron of paprika, longaniza, lard, suadero, and cow intestines. The rust-hued broth unleashes a very particular aroma; listen carefully and you’ll hear passersby commenting on the intoxicating bouquet. This isn’t the straightforward beefy perfume that wafts about a steakhouse; this is the sweet fragrance that develops from chile-laced bovine innards stewing in pork fat

Welcome to Taqueria Ramirez, an outstanding Mexican spot whose ravenous fanbase can cause the six-item menu to shrink to four items by 9:30 p.m.

Anyone who closes their eyes and takes a deep breath could mistake Ramirez for a Sichuan hot pot restaurant, a place to enjoy meats simmered in aromatic oil. Indeed, the spicy ethos here is similar, though the cooking times are longer, so that the sinewy off-cuts might break down into tender morsels. After letting the meats bathe for a few hours, resident chefs lift the finished pork and beef products out of the choricera — a stainless steel vat that’s common in Mexico City but rare here — and place everything inside griddled corn tortillas.

If the taco in question is tripe, chef Giovanni Cervantes blowtorches it for eight seconds, calls your name, and hands you the delicacy on a red plate. It boasts a flavor profile that’s nothing like the tomato-y intestines one might encounter at a French or Italian restaurant. The tripe here, on certain nights, is greasy and slippery, like good yakitori; on other nights it packs a punch of funk and a creaminess that recalls liver pate. The judicious size means you polish it off in three quick bites, before the offal overwhelms. Still hungry, you ask for a suadero taco. Alas, on this particular night, the kitchen sold out of that luscious option 30 minutes before you even arrived.

Taqueria Ramirez is simple: It serves tacos, easily some of the city’s best. Ramirez doesn’t really offer anything else. There are no tortas, sopes, mulitas, huaraches, or branded T-shirts with clever graphic designs. Just as a high-end omakase spot might only sell nigiri sushi, Cervantes offers a singular style of product, a minimally adorned creation that he constructs with the skill, speed, and intuition of a transplant surgeon. There are six employees and six tacos, three of which rely on ingredients fished out of the choricera. And that collection of small tacos — four make a light meal — involve little else besides a modest pile of meat on a corn tortilla.

Patrons can enjoy a bit of greenery in a nopales taco, a reality that gives a momentary sliver of hope to vegetarians — until they see a fateful disclaimer: All dishes “may contain lard.”

Cervantes, who runs Ramirez with his business and life partner Tania Apolinar, charges $4 for these Mexico City-style masterpieces, or $5 for the tripe. The only other menu items are Mexican Coke and Topo Chico. The owners have no plans to sell alcohol, a strategy that ensures waits are short as people steadily stream in and out. Here’s how things work: You queue up, order, wait amid a scrum of very hip Greenpoint residents outside, retrieve your tacos when called, add salsa and onions from a condiment bar, then wolf down everything at one of 16 stools. There is no delivery, no takeout. Everything is served on plates that you must return to the kitchen.

To live in New York in 2021 means to eat better tacos than in years past — if you’re in the right places. Just as the five boroughs have experienced a slice joint revolution over the past half-decade, with bakers looking to upgrade their flour sourcing and fermentation, scores of independent restaurants, birria trucks, and even small chains have been slowly working to improve and diversify the quality of anything wrapped in soft tortillas. The quality of the tortillas themselves has played no minor role in this mini-boom, with some chefs experimenting with in-house milling and nixtamalization, and others relying on the city’s growing class of ambitious molinos and tortillerias.

Cervantes isn’t unique in his use of the excellent tortillas from Nixtamal in Jersey for his tacos. What he does with those tortillas, however, is where things start to get interesting. Ramirez dips them in the choricera’s ochre tallow, then lets the tortillas crisp up on the comal. The result is a shell that doesn’t quite flaunt a birria-style crunch, but still exudes a nourishing chew. The aroma isn’t as complex as at venues with homemade tortillas; it simply exudes a toastiness that screams sunbaked corn.

So again, the choricera produces heady meats, and the kitchen elevates their tortillas with deft cooking, but those factors still don’t fully explain the grandeur of Ramirez. To understand what puts the Greenpoint establishment into an elite class of Mexican restaurants, it’s worth paying attention to precisely how Cervantes builds and serves his tacos.

Gabriela Cámara, the CDMX chef who’s the force behind Contramar, has a few words to say on taco construction in her cookbook My Mexico City Kitchen. Cámara argues in favor of building the foodstuff not on the basis of rigid recipes but according to larger guiding principles. It’s about “the ratios,” she writes: “No part should dominate, and the taco should be generous but not overstuffed ... this is finger food. You must be able to eat it without things falling out.” She adds: “Once you hold a taco, you must never let go of it until you finish it. That’s actually the only legitimate taco rule.”

Or think of it this way: One wouldn’t put down a piece of grilled toro sushi after one bite, then pick it up a few minutes later when the fish is cold and the rice has gone limp. Just the same, it doesn’t take too long for a juicy pile of carnitas to eat their way through a thin and aromatic tortilla.

Cámara’s rules, of course, are far from dogma. There’s something especially nice about sturdy takeout tacos, especially if you’re more interested in streaming Succession than appreciating the nuances of specific corn varieties.

What’s more disappointing, however, is how scores of ambitious New York chefs sabotage their expensive restaurant tacos with weighty proteins and substandard, imprecisely cooked tortillas. Aldama is a wonderful exception in this regard, but at the more casual level, I don’t know of a single venue, except for Ramirez, that has a more preternatural sense of portioning its tacos and ensuring that patrons eat them at the peak of their freshness.

Consider the longaniza — similar to chorizo. The paprika-infused oils enrobe the tongue, but Cervantes only uses about two tablespoons of sausage; the meat isn’t heaped so high that it spills out the back side. Apolinar tells me that they build each taco so the fillings only cover about three quarters of the tortilla. That restrained ratio lets the corn balance out the rich longaniza and other meats with a delicate starchiness and a sweet, earthy perfume. Each taco disappears in just a few bites; you’d spend more time eating a single steak fry.

The key is to devour your prize the moment Cervantes hands it to you, when the warm tortilla and juicy fillings are at their momentary zenith — and before the lard-slicked exterior starts to stiffen up and congeal.

Cervantes deploys even less meat for the tripe — a little funk goes a long way — so much so that the organs almost seem to vanish inside the folded tortilla. If this one were a bagel you’d say the portion of tripe was no more than a schmear. The same can be said for the judiciously apportioned suadero, which doesn’t show off the same intense beefiness this cut can elsewhere; this one’s more about shining a light on the savoriness of the belly-adjacent meat. As is the case in Mexico City, however, a campechano order lets diners experience the oily longaniza and umami-rich suadero in a single indulgent taco.

Only the nopales truly spill over the tortilla’s outer edges, with its lavish pile of vinegared cactus, queso fresco, and golden chicharrones (a $1 supplement). And yet, somehow, the creation is still feathery enough to feel about as heavy as a twirl of carnival cotton candy.

The al pastor, in turn, serves as a spot on rendition of the pineapple and pork classic. Sheathes of adobo-spiced shoulder meat, doing their best impression of a geological cross section, are shaved to the thinness of linen sheets. If the $9 version at Aldama represents this taco’s modernist apex, with a tortilla as fragrant as truffles and a quenelle of pineapple-serrano gel, few other venues approach the simple bliss of Ramirez’s $4 al pastor.

The no-takeout policy and elegant counters — situated right by the comal and choricera — should help folks enjoy everything in its ideal state, but that doesn’t stop people from going about things differently. On a recent Wednesday, two patrons dressed to the nines took their fresh tacos from the counter, looked at them for a few minutes, then placed them in a pizza box filled with garlicky slices and strolled off into the sunset. I bet they were still good. But most diners here know to dig in right away.

Our review of Taqueria Ramirez 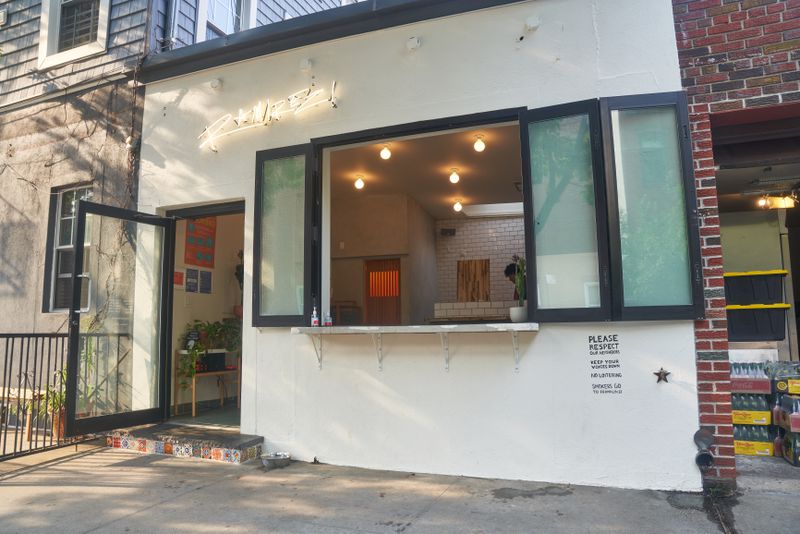 Cost: All tacos are $4, except for the tripe, which is $5. Adding chicharrones to the nopales taco is an extra $1.

Bonus tip: Be prepared for suadero and/or tripe to sell out sometime in the 9:00 p.m. hour. Also keep in mind that Ramirez occasionally sells leftover boxes of al pastor the following day for $10; check the venue’s Instagram for details.