Share All sharing options for: Contra and Wildair Score Big With Chinese-Taiwanese Takeout and Fancy Doughnuts

Wildair, one of those hip natural wine bars that make patrons feel as if they’re extras in a Sofia Coppola flick, has uploaded to Instagram what is surely the world’s most mesmerizing doughnut video. It is just 12 seconds long. A chef uses a spoon to tap the dorsal side of a doughnut 10 times, hitting it like a timpani drum. The result is pure ASMR, a phenomenon that one would more typically associate with the pop of a beer cracking open or the sizzle of lamb fat dripping onto a charcoal grill. But so it goes that this is not a normal pillowy doughnut. It is a crisp creme brulee doughnut.

Chef Fabián von Hauske Valtierra fortifies the pastry’s exterior with a translucent disc of thrice-baked sugar. When you hit the $8 treat with a utensil, the sonic effect is percussive at first, then muffled when the exterior shatters, giving way to a yolk of vanilla custard.

The stereo sounds of the brulee remind me of how much I missed the creativity of Wildair and sister spot Contra — both of which von Hauske Valtierra runs with chef Jeremiah Stone, and both of which have undergone serious pandemic pivots amid the current indoor dining ban. In short: Wildair has transformed from a modish small-plates venue into a progressive market and sandwich shop, selling what might be the city’s most technically astute bacon and egg on a roll. Contra, in turn, has mutated from an expensive (albeit accessible) French-American tasting-menu destination into a more affordable place for modern Chinese-Taiwanese takeout. Spoiler: The two Lower East Side restaurants remain excellent, with stunningly complex sweets to boot.

The sublime doughnut and its corresponding video, however, also remind me of a larger truth about COVID-19 dining — namely, how long it’s been since many of us have regularly enjoyed the pleasures of composed, original desserts.

Scores of bakeries, whether they’re brick-and-mortar mainstays or online pop-ups, have been selling inspired pastries amid the pandemic. But ambitious restaurant-style desserts, those bits of whimsy that sometimes act as rousing counterpoints to otherwise stodgy meals, have had a rougher go of it during the COVID-19 era. During leaner times, folks tend to cut back on one indulgence or another, and the cruel reality is that roast chicken tends to make a more compelling dinner than cardamom rice pudding with apple foam, no matter how much I like to argue otherwise.

Then there’s the fact that an expensive steak or a good slice of pie won’t deteriorate too much via takeout, whereas the more precarious architectures or temperature contrasts of high-minded desserts don’t take as well to 30-minute subway rides. Accordingly, restaurant sweets that represent more artistry than nourishment — no offense to a fine morning croissant, a postprandial fruit crisp, or yet another cookie — seem to be harder to come by these days.

Von Hauske Valtierra was responsible for putting out some of New York’s best and most cutting-edge desserts in pre-pandemic times, from Wildair’s chocolate hazelnut tarts that looked like, um, a very particular emoji to airy mousses that Contra hid under kaleidoscopic granitas.

For now, the chef’s brulee doughnut special is an appropriate consolation prize, an interactive and haute dessert repackaged for takeout times. It’s almost like a cream puff in that there’s more filling than doughnut; I like smashing through the thin top layer of sugar and dough before slurping up the vanilla custard with a spoon. Then, I pick up the messy pastry, which acts in salty, savory relief to the sweet filling, and quickly finish it off. The doughnut’s layered textures and bash-it-with-a-spoon interactivity channel the sensory wonders of indoor dining — even when consumed on a Long Island couch hours after purchase.

Contra and Wildair, while gastronomically unrecognizable from their previous iterations, remain true to their original ethos. They still abide by their wildly innovative, anti-elitist philosophies. Contra’s a la carte Chinese fare feels no less ambitious or elegant than the venue’s Gallic-inspired tastings, while Wildair’s modestly sized sandwiches — some of which are small enough that one can eat two in a single sitting — jibe with the snackier religion of that small-plates place.

Take the compact seafood burger, a springy shrimp, scallop, and lobster patty on a squishy potato roll. Bay leaf remoulade adds tang, solidifying the sandwich’s status as a fancy Filet-O-Fish. It is a lovely, albeit spendy, study in soft, sweet, maritime flavors (I just wish the kitchen used less sauce). For more texture, consider the fried chicken sandwich, easily the city’s crunchiest, which is slicked with a bright yuzu kosho mayo.

Even better is the Chinese short-rib sandwich, a weekly special wherein the chefs toss a generous pile of braised meat on a crusty baguette with fistfuls of cilantro and chile sesame oil. The dish is at once salty, nutty, intensely beefy, and thanks to the cilantro, intensely grassy. A cup of jus arrives on the side for dunking, though I recommend simply sipping it to stay warm on a chilly day.

Here’s hoping that the short-rib sandwich — and the brulee doughnut — become more permanent additions to the menu. But for a more reliable indulgence, consider the bacon and egg on a roll. The chefs make it with a tender slab of pork belly that’s thicker than some diner steaks and pair it with a feathery egg crepe, placed underneath, that almost tastes like it’s made with more sweet butter than egg. It will keep you fed all day long.

The Contra crew doesn’t ride into town to replicate things, but rather to tweak, refine, or invert a culinary formula. Such is the case with dohua pudding. In Sichuan province, Taiwan, and elsewhere, tofu comes doused in various forms of sugar syrup, sometimes enhanced with ginger, often a cooling antidote to chile-laced savory fare.

Stone, who is of Chinese descent, does something different. He uses Californian Hodo soy for his homemade tofu, pairing the freshly set curd with a maple-mirin reduction. An initial bite is profoundly jarring and exhilarating; the silken tofu slides easily down one’s throat, while the sauce manages to hover in a unique space that’s intensely savory yet noticeably (if reservedly) sweet. It’s as if the tofu wants to be a dessert, but changes its mind at the last minute.

Contemporary Chinese and Taiwanese fare is having a moment throughout the city, and Contra has joined its most impressive ranks with its excellent, edgy preparations. You see that edginess with the tofu and with the edible sculpture that is chilled beef. The chefs cut cubes of braised shin, douse them in spicy chile oil, and place them next to cubes of smoked tea gelee cut to virtually the same dimensions. This all lies underneath an opaque, pink and white canopy of shredded radish, which allows for an element of surprise. Some bites are firm and beefy, while others are shockingly jiggly and astringent.

Other dishes adhere more closely to traditions, while sporting a few studied enhancements here and there. Niu rou mian, or beef noodle soup, gets an obvious but excellent upgrade with wagyu beef brisket; the braised slices convey a heady bovine wallop as they practically fall apart when prodded by a chopstick. Everything else is almost par for the course: warming, clear, cinnamon-laced broth — perhaps with more vegetable aromatics than elsewhere — and a tangle of firm noodles for slurping.

Lou rou fan, the famous Taiwanese dish of soy-braised pork over rice, doesn’t seem to stray at all from the classic preparation, either; it’s just that the flavors are heightened and clarified. Even more striking is the vegetarian riff on this dish, which I’ve not encountered in New York. Stone cooks down criminis, shiitakes, turnips, and pressed tofu until everything magically takes on the texture of firm, fatty, umami-rich swine. Outstanding.

One of Contra’s hallmarks is that it has historically focused its dessert offerings on gelatos, semifreddos, and other frozen delicacies — there are no slick, Robuchon-style faux apples here. Those icy treats, however, have always belied their simplicity, a truth revealed to anyone who’s sampled the venue’s mandarin granita with popcorn mousse. The dish channels an easygoing beachside treat as much as it does a confection at an avant-garde establishment, with the granita covering the maize-flavored fluff like a pile of orange, ersatz gravel.

I’m eager for that old treat to return, but for now, the chefs manage to upgrade another staple summertime snack: the ice cream sandwich. The kitchen takes black sesame ice cream, drizzles it with miso caramel, and places it between shortbread cookies. The dish feels basic in its conception — it’s yet another salty-sweet-nutty affair — but the sesame adds a level of earthiness that almost recalls a poppyseed bagel. It is, at $8, a fairly priced entry point into the Contra-Wildair world, and it makes one wonder whether von Hauske Valtierra and Stone will keep things going on the takeout, delivery, and doughnut front post-pandemic, to help expose more folks to their thrilling talents. I hope they do. 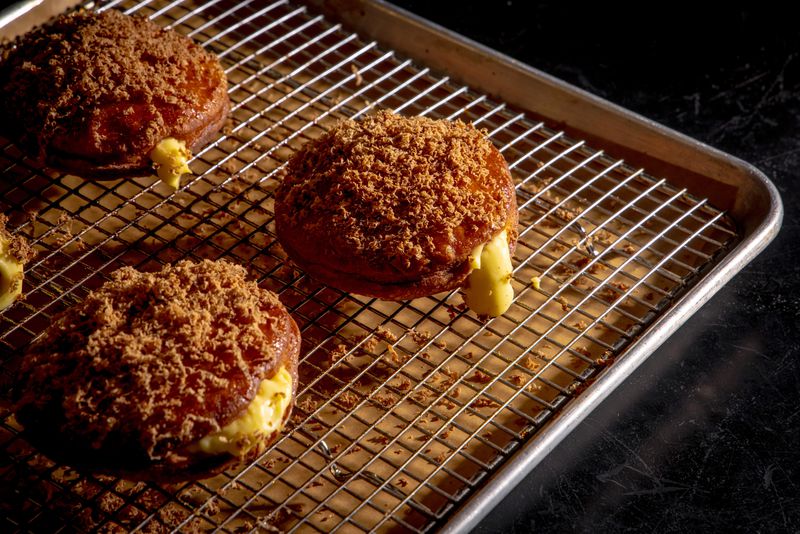 Bonus tip: Doughnut flavors vary from day to day and can sell out quickly. Online sales usually begin around 11 a.m. Wildair and Contra diners can dine in the heated, open outdoor area after paying, or take their food back home.

Our review of Contra 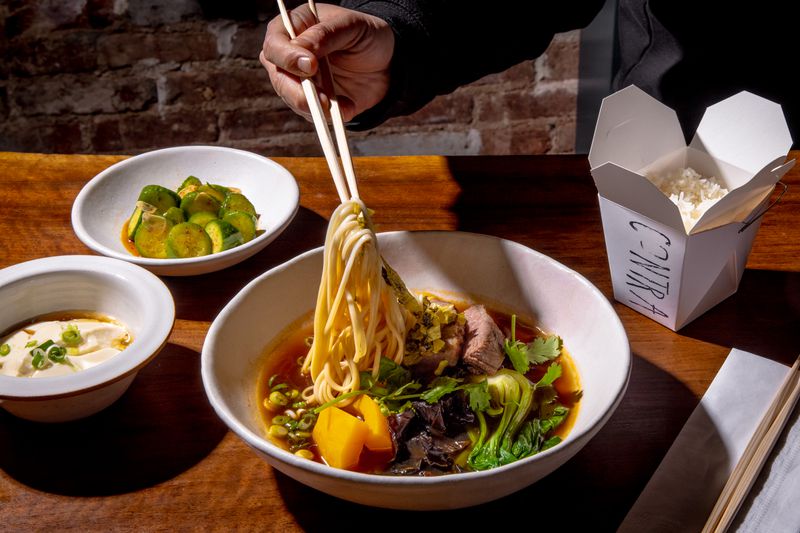 Bonus tip: For modern Taiwanese in the city, also consider 886 or Ho Foods in the East Village, or for a more traditional menu, Main Street Imperial Taiwanese Gourmet in Flushing is a longtime favorite.