Share All sharing options for: Veronika Is a Romantic Ode to the Grand Traditions of Eastern Europe

Review and information for Veronika

Coulibiac, the Russian fish pie, captured plenty of imaginations more than a century ago. In an 1871 short story, the great Russian author Anton Chekhov wrote that the dish should “make your mouth water, it must lie before you, naked, shameless, a temptation. You wink at it, you cut off a slice, and you let your fingers just play over it.” Legend has it that Auguste Escoffier learned how to prepare coulibiac in Nice while cooking for Russian naval officers early in the 20th century; he subsequently included the recipe in his famous Guide Culinaire, using salmon instead of sturgeon. By 1972, New York Times critic Craig Claiborne, in a meditation on “list-making,” declared it the world’s greatest dish.

Yet despite 100 years’-plus worth of raves, coulibiac is almost completely unavailable in the city’s top restaurants. Veronika, Stephen Starr’s impossible-to-get-into and occasionally excellent Eastern European-leaning establishment, is here to change that.

Located on the second floor of the Fotografiska museum on Park Avenue South, Veronika is a self-proclaimed grand cafe. Triple-tiered chandeliers hang from 20-foot ceilings. Intricate stained glass adorns a gilded lounge. And beautiful people wear jackets at their tables without putting their hands through their sleeves, a sartorial choice that makes it look as if they’re auditioning to eat cake in a chic Austrian perfume advert. It is the type of ornate, pre-crash environment one expects for a grand dish like coulibiac, which the waiter brings out on a white plate with elaborate gold etchings.

The coulibiac has three layers: a pink interior of salmon, a thinner ring of rice, and a crisp pastry casing. The kitchen plates the dish as a cross-section, so every component is visible. A pool of Champagne sauce and trout roe spills across the plate.

Its look is distinctive: One Instagrammer thought it recalled the Wu-Tang symbol. Another compared the appearance to “alien lungs,” while adding that they wanted to do something to the dish that I would euphemistically describe as “horny.” Yonic or not, it is an exceedingly tasty dish. The salmon is pudding-like in its texture, while the rice tones down the oceanic oils with starchiness and a jolt of lemon. The exterior is appropriately crispy, and the roe adds precise bursts of brine. The clean flavors and declension of textures suggest that in the pantheon of all the world’s great savory pies — from Bolivian saltenas to Moroccan pastillas to French pithiviers — the coulibiac, particularly at Veronika, is no less deserving of a seat at the table.

Veronika is a departure for Starr. Over the past six years, the prolific restaurateur has focused his New York offerings on modern American, British, or Western European fare (there was also El Vez, his Mexican endeavor from early 2014). His latest establishment, however, bills itself as a grand European cafe that’s “romantically reminiscent of Eastern Europe at the turn of the 20th century,” that gilded era before two World Wars and an Iron Curtain would devastate and divide the continent.

A culinary yearning for the past tends to play well in these Trumpian times; one thinks of the Grill or Anton’s. And Starr also happens to be filling a hole in the city’s modern dining scene. Veronika is Manhattan’s only high-end Eastern European-leaning restaurant. Kachka in Portland is a national sensation, but tony Manhattan restaurants — or even everyday brasseries — don’t really draw from the cuisines of Russia, Ukraine, Belarus, or the Balkans for their upscale fare. That’s a shame given the deliciousness of those traditions, not to mention their historic use of fermentation, pickling, foraging, and other techniques and ingredients trending in the modern culinary world.

Chef Robert Aikens, who helped open Starr’s Pastis, brings some of these sensibilities to Veronika. The improbably named classic known as “herring under a fur coat” is often a hefty, nourishing terrine molded in a casserole dish. Here, it looks and tastes like a zingy dish one might encounter at a hip neo-bistro. The chef hides slivers of ultra-oily fish underneath thin slices of puckery beets, while a grating of eggs gives everything the smooth mouthfeel of edible mink. Or with pork-laced borscht, Aikens imparts the classic soup with just a touch more acid than elsewhere, reining in the sweetness of the beets with cider vinegar — while also adding the requisite sour cream, which bleeds into the red broth and gives it a faintly pink hue.

Aikens also draws his inspirations from Austria and France, and in one case brings in a rare Gallic delight from the United Kingdom: soufflé suissesse. The great Roux brothers created the dish in 1965 for London’s Le Gavroche. The suissesse is a paradox: an airy dome of eggs drenched in mornay — that emulsion of bechamel and gruyere that’s the heaviest known drinkable liquid in the universe. The wicked-hot soufflé vanishes on the palate, while the cheese sauce never seems to disappear, enrobing the tongue with its luscious fats and alpine funk.

Like other dishes at Veronika, the suissesse adopts a khaki palette. This is neutral-hued food that stands in contrast to the extravagant room. Even lobster Americaine, with its sweet, crimson meat, takes on the faded tones of an old VHS movie. It’s as it should be for such a throwback dish, whose chief pleasure is in mopping up the rusty shellfish reduction with rice.

And then there is the study in white and off-white: three bone-colored pierogies filled with creamy potatoes and paired with sour cream. An inconsequential dollop of caviar vanishes into the background. Are the $17 dumplings any more refined than the $7 ones at Veselka, the everyday East Village hangout? Not really, but sometimes it’s nice to have rustically excellent fare in a fancy establishment. Not everything needs to be poured through a sieve 800 times to qualify as high-end.

Those pierogies, however, prompt a larger question for Veronika, which is whether it’s trying too hard to make a cafe, a purportedly democratic institution, into an exclusive one. For the most part, it’s not necessarily a question of price, but rather access. Dining here requires month-ahead planning. There are no tables set aside for walk-ins, nor is there bar dining. It’s a style of unapproachability that’s only slightly more understandable at Starr’s fancier temple of Gallic gastronomy, Le Coucou.

Those who simply drop by for a drink at Veronika, like my colleague did recently, will find that the entire space is reserved for folks with a booking, meaning the joy of people-watching and taking in the gorgeous room is verboten (folks without bookings are sent to the downstairs chapel bar). It’s hard not to wonder: With ceilings high enough to accommodate a few Gulfstream private jet fuselages, could Starr not have found room for a bar with more than six seats, so a few more impromptu patrons could enjoy a drink here — or a bite?

This approach to dining feels tilted toward an older moneyed class who want to know precisely where they’ll be eating their roast duck a month from today, and who want to guarantee that even an a la carte meal will be a theatrical, 90-minute experience. If restaurants like Momofuku, Estela, or Wildair represent the prevailing style of dressed-down, downtown, small-plates places, Veronika recalls one of those uptown prix fixe white-tablecloth spots from 2003 where every meal was three to four courses, and where the reservationist was your chief barrier to entry.

Hence the boring black cod, preternaturally crispy but slathered in a monochromatic butter sauce, and the perfunctory snails in garlic butter. There’s also the requisite tuna tartare, filet mignon, and Dover sole. Given the ubiquity of those dishes around town, it’s hard not to wish Aikens instead highlighted more regional fare with less representation. Then again, given how rarely one encounters the opposite — you don’t see Balthazar slinging pelmeni — the more generous assessment is that Veronika is the outlier, expanding the concept of what a pan-European menu can look like.

For those who can motivate themselves to care about eating these types of things 30 days out, Veronika is uniformly excellent. For those who can’t, there’s a more casual cafe downstairs that sells turkey on pretzel rolls. Perhaps the Starr team will at least start offering some of Veronika’s cakes in that space, particularly the medovik, a riff on the Russian delicacy that layers golden-brown cake with honey chantilly icing — instead of the traditional sour cream (verdict: It tastes about the same). Muscovites often pair it with tea in the late afternoon, and I have no doubt that when Veronika opens up for lunch, taking an impromptu trip here for a slice of the soft, heady tort will be easier.

Our review of Veronika 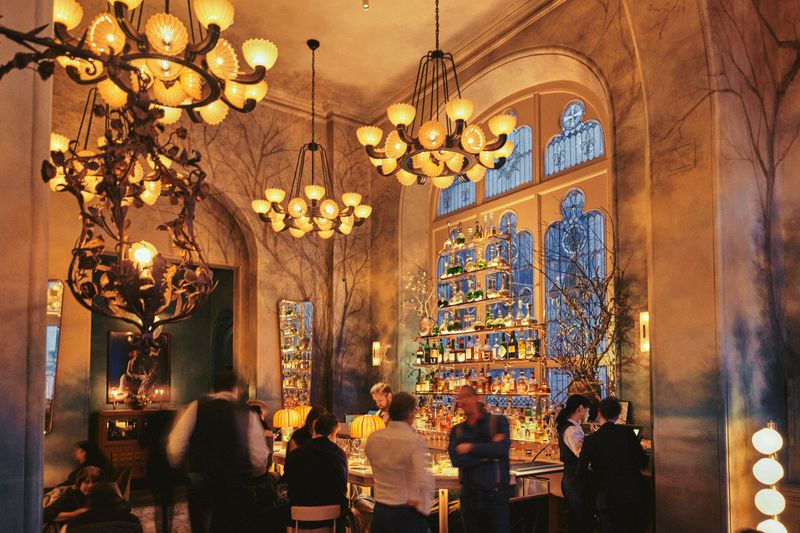 Bonus tip: Patrons at Veronika can access the museum afterward for $14 (half price). The photography museum doesn’t close until 11 p.m. most nights and is until midnight on Thursdays, Fridays, and Saturdays