It’s a fairly routine occurrence whenever an acclaimed Manhattan chef opens a sushi bar or a swank Italian spot in the Hamptons, maybe even more so these days as the pandemic keeps wealthy folks working from the money-soaked suburbs. Yet on at least one recent occasion, a tiny but notable South American restaurant group relocated out east a bit differently, and much more affordably.

As office workers fled the city this past spring, the Bolivian Llama Party crew shuttered their two sandwich stalls — one in a chic Midtown subway station and the other in a luxury development in Downtown Brooklyn — and opened a sit-down restaurant in Sunnyside, a bustling residential neighborhood known for its deep bench of Colombian and Ecuadorian spots.

Llama Party, which debuted in the old Mi Bolivia space in March, remains one of the city’s most vital purveyors of Bolivian fare in its latest iteration, a point worth disclaiming with the fact that it is one of the city’s few representatives of that country’s diverse culinary traditions. Here in Queens, chef-brothers Alex, David, and Patrick Oropeza still send out their signature salteñas — imagine a cross between a xiao long bao and an empanada — but they also offer modernized and sometimes experimental riffs on rarely-seen-in-New York dishes.

On a recent Saturday, Alex worked the takeout window while DJ trio Cuchara de Palo spun Andean vinyl on a small patch of 48th Avenue in front of the restaurant. About 10 socially distanced patrons on the al fresco terrace sipped BYO beers while overlooking the Empire State Building, framed against a pink sky like a giant harvest moon. As night fell, customers continued to line up for a freewheeling bill of fare that included vegan chola jackfruit sandwiches, black truffle fries, and ice cream made from cherimoya (a lychee-flavored fruit) that’s also studded with chunks of birthday-cake batter.

A few patrons, however, ordered the picante de pollo, which is entirely less freewheeling. Bolivians usually make this speciality by simmering chicken in broth with a ton of garlic, cumin, and a fiery aji amarillo (yellow chiles). The Oropeza brothers tweak that formula a bit. They brine the bird overnight in brown sugar, garlic, thyme, and aji, then forge a powerful sauce from the trimmings, fortifying it with a few less standard ingredients, including basil and anchovies. The chefs then sear the chicken, paint it brown with the rich sauce, garnish it with fried capers, and call your name when it’s ready.

I sampled picante de pollo during a four-day trip to La Paz in 2013, and can affirm that the version by BLP, as the restaurant calls itself, is a faithful reimagination of the original, albeit with more concentrated savoriness and heightened aromas. The chicken is firm and neutral, acting as a fine delivery mechanism for the sauce, which boasts nuclear-strength garlic. The heat, in turn, hovers in that liminal space between noticeable and painful. A faint bitterness, the type of tannic astringency one might expect with good mole Oaxaqueño, gives the sauce backbone, while a silky mouthfeel recalls Thanksgiving gravy concocted by someone who works the saucier station at a posh Midtown spot.

When the bird disappears, you devour the sauce-stained rice underneath, then dredge crispy fries through any mocha-colored spots on the bottom of your plate.

The Oropezas — Alex was born in Central Bolivia’s altitudinous Cochabamba while Patrick and David were born in the Queens lowlands — have an impressive knack for setting up shop in shiny developments where diners more frequently encounter Eurocentric American staples.

In the mid-teens, the brothers ran a saltena-and-fries pop-up at Royal Palms, an expensive shuffleboard club for Gowanus gentrifiers; they also provided the food options at Club Output in North Williamsburg for three years. And BLP was often among the most crowded vendors at the Turnstyle food hall just south of Columbus Circle. More recently, it opened as one of the anchor tenants of the Gotham West food hall at the Ashland in Downtown Brooklyn, one of those expensive apartment complexes with a rooftop lounge and three months of free rent.

The motivation for opening the Queens location, by contrast, was less about expanding or branding, and more about survival. COVID-19 temporarily closed their other outposts — a subway food stall is tough to run without commuters — so the brothers turned their Sunnyside commissary into a proper outdoor restaurant. They started off by sending out one of their personal cell numbers to their 17,000 Instagram followers for takeout salteñas.

Those salteñas remain as excellent as ever. They’re tinted yellow from aji amarillo and sport a handsome braid down the spine. You nibble off the top of the shell, which is sweet from cane sugar, then slurp up the jigote, a soupy interior made gelatinous from cow’s feet. Some contain a mess of beef stew that packs the concentrated bovine punch of good Texas Red. Others hold a goulash-y dose of chopped chicken in chile sauce, a spicy wonder that becomes even more fragrant if you pour in a thimble’s worth of pure green salsa. That fiery condiment, known as llajua, helps cool the salteña’s piping-hot insides while providing as much aromatic quilquiña (Bolivian coriander) as industrial extract.

Over the months, the Oropezas added a few stools for seating and then a custom patio; I watched them build it with buzz saws and tape measures over a late lunch one Friday. The style of dining is quick-service plus: You put in an order, pay, and when your food is ready, you either pick it up yourself or a staffer brings it over.

BLP also expanded its menu to include more composed, sit-down dishes, like Cochabamba-style silpancho beef patties with a runny fried egg. That’s admittedly more straightforward Bolivian fare than truffle fries, and there’s a reason for that. The realities of the Sunnyside location sometimes challenge the brothers to grow the menu in a way that’s more in line with their Andean heritage.

“A lot of Bolivians sent us messages asking for traditional dishes,” Patrick said when I asked why he decided to add picante de pollo to the menu. Of course, that caper-laced chicken isn’t traditional in the strictest of senses: It doesn’t contain chuño, a warning that’s printed on the menu in the type of at-your-own risk parenthetical one might expect for a high-interest credit card or a no-substitution hamburger.

For those not schooled in South American cooking, chuño are potatoes that have been freeze-dried, sunbaked, and trampled at 3,800 meters, leaving them with a distinctively earthy, ethereal flavor. The Oropezas all laughed in sync when I asked about the its omission. “We grew up not liking chuño,” Patrick said, while adding that the ingredient’s availability is a big factor in its absence.

Bolivians rank among the smallest Latinx groups in New York, numbering just a few thousand according to Census data, though the largest concentration live in nearby Jackson Heights. BLP’s storefront is likely familiar to many of those individuals. The Mi Bolivia sign still hangs above the window; the Oropezas say patrons still ask for Marcelino Quispe, the venue’s former owner. For well over a decade, that restaurant served as a mainstay of the city’s Bolivian community, serving up spicy aji de lengua (tongue stew) and rich sopa de mani (peanut and beef soup).

BLP is currently testing out a truffled riff on peanut soup, but it more consistently offers fricasé, a pozole-like blend of chile, pig parts, and field corn. The soup lights the palate ablaze with heat and conveys a flavor reminiscent of salty country ham. It is undeniably delicious and appears to align with the classic recipe, though with the addition of anise, for a licorice-y sting, and smoked pork neck and feet, which the Oropezas call an ode to Cajun cooking.

Patrick, alas, told me that at least one Bolivian didn’t even recognize his soup as fricasé. In response, he’s considering sending out a Google survey for feedback on the dish, something he did for the picante de pollo. That survey falls squarely in line with the ethos of BLP, which is, according to the brothers, to “preserve tradition while pushing boundaries while we can.” The brothers admit that those limits are “hard to pinpoint.”

Pushing boundaries is precisely what BLP does with classic Bolivian sandwiches. A case in point is the chola sandwich, a La Paz specialty named for the indigenous Aymara and Quechua women — clad in bowler hats and multicolored aguayo cloths — who sell them. A classic chola involves layers of garlicky pork, roasted and sliced, underneath a tart pile of escabeche vegetables.

Llama Party has been playing around with that traditional preparation, which flaunts a hearty chew and amped-up level of porkiness. But on most evenings, the chefs brine their swine with brown sugar, aji, fish sauce, and clove, imparting it with a modern breakfast-sausage aroma. The kitchen piles the meat — which is pulled and chopped — on a sturdy, house-baked roll with a sharp blend of pickled carrots and onions. A brisket version follows the same formula, though with a fennel- and pepper-crusted beef whose softness approaches that of pudding. It packs the type of cushy fats and restrained smoke that would make the sandwich feel right at home at Hometown Bar-B-Que in Red Hook.

But perhaps edgiest of all is the one-of-a-kind jackfruit chola. The Oropezas cook the plant down with spicy aji, garlic, and, in a nod to American barbecue, smoked paprika, molasses, and onion. The result is a pile of faux meat teeming with chewy burnt ends. The flavors alternately recall smoked artichokes, black olives, and a pile of faintly sweet Kansas City-style ribs.

If BLP’s savory fare largely constitutes a restrained effort in creativity, some of the desserts are straight-up Ample Hills-style over-the-top. Cherimoya birthday-cake ice cream, for example, is perfect for anyone who’d enjoy the delicate, floral scent of an Andean fruit demolished by the apotheosis of nostalgic suburban baking culture. But here’s the thing: That dessert still manages to taste pretty great, channeling standard cake mix while keeping the sugar levels in check.

And anyone expecting classic api morada, normally served as a thick, purple, corn-based breakfast drink, will instead find that the Oropezas have transformed that beverage into ice cream. The frozen treat is as silky as high-end gelato and carries a highly spiced flavor profile that suggests a gourmet response to the cinnamon challenge of the early 2010s.

“We’ve been winning over the older Bolivians,” Patrick told me one night, adding that those diners “want the traditional, but after some api ice cream, all is well.”

As for that BLP-style picante de pollo, the Oropezas say the Bolivian clientele actually love it, a fact I was able to independently confirm when they emailed me the detailed Google survey responses on that dish. The brothers added, however, that “the major gripe was the chuño.” They said the pandemic is making it tough for them to source the Andean staple, but they have a plan to add it.

Our review of Bolivian Llama Party 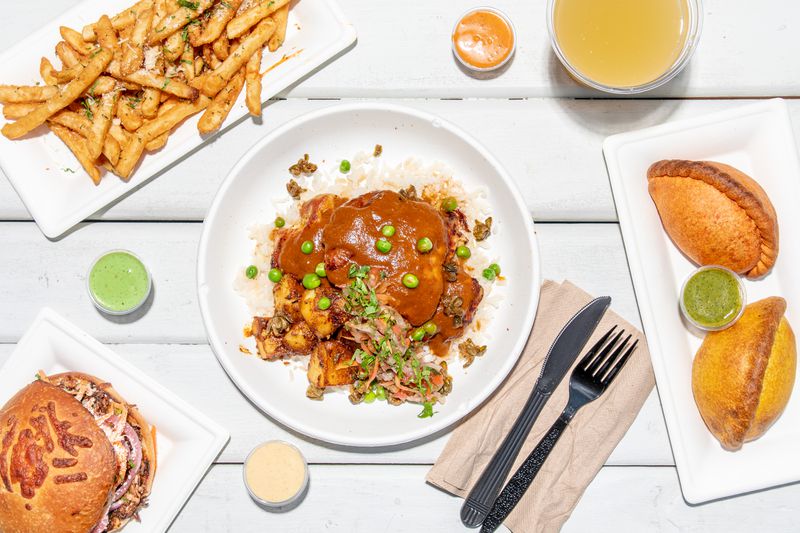