Red Paper Clip is busy and filled with promise, but two Blue Hill alum chefs aren’t fulfilling them yet

Not too long into dinner at Red Paper Clip, an Asian-leaning tasting-menu spot in the West Village, a server brings over an ash-colored plate decorated with white swirls of yogurt and scattered herbs. “Carrot katsu,” he says. This is unusual, not just because this breadcrumb-enriched cutlet is typically made with pork or chicken, but rather because this style of Japanese cooking isn’t frequently seen at a bastion of expensive eating — unless it involves a fat slab of luxurious wagyu.

The katsu packs a deeper, denser crunch than a more cloud-like piece of tempura. The exterior, however, quickly yields to a softer orange interior, at once vaguely sweet and savory. Those swirls of yogurt, in turn, add a soothing tang, while shiso oil conveys a minty, licorice-tinged perfume.

On a good night, it easily ranks as one of the better katsu dishes in a town, and it shows that a more rustic Japanese dish like this one is just as deserving of a place on a tasting menu as a slice of blow-torched tuna neck. On a bad night, however, the carrots are undercooked and cloying. The aroma of the shiso is flat. And the conversation ends there, a disappointing conclusion to an exciting idea.

“These are black truffles from Oregon,” a waiter announces a few minutes later, shaving them over something dubbed xiaolongbao agnolotti. It’s a cross between the Italian stuffed pasta, not an uncommon player on long, fancy menus, and the Shanghainese soup dumpling, which is seen less frequently at more formal, prix fixe establishments. You pop one of the sachets into your mouth and wait for the magic to happen. It never does — more on why in a bit — but it still tastes pretty good.

And at $95 for the tasting, the price isn’t too shabby either.

The two-month-old Red Paper Clip, an uneven solo debut from Kevin Chen and Tashi Gyamtso, lies at the center of a few different narratives. One is about a duo of Blue Hill at Stone Barns alums charging a very fair price for a six-course menu. As sushi temples priced for oligarchs continue to open up around the city unabated, and as diners flock toward chophouses where the price of a single main course can hit the triple digits, fewer restaurateurs have been willing to give it a go at the sub-$100 level.

Contra has long been the champion of the “budget” tasting menu, while Luthun in the West Village and Reverence in Harlem represent newer entrants to the field. And while $95 is far from cheap by any yardstick, diners seem to be responding well to Red Paper Clip, with quoted wait times at the bar area sometimes exceeding 90 minutes. The people want their salt-and-pepper lobster.

The presence of that dish and others brings up another narrative, which is that these two chefs are dedicating noteworthy tasting-menu real estate to the diverse foodways of China. Chen, a native New Yorker of Taiwanese descent, and Gyamtso, who was raised in Tibet, have put together a dinner that weaves Cantonese, Shanghainese, and Himalayan ingredients with those from France, Italy, Japan, and elsewhere. That’s no small matter. While a new class of hip restaurateurs are showing off the multitudinous culinary traditions of Taiwan, Hong Kong, and the mainland, Chinese fare doesn’t benefit from as much representation as Korean or kaiseki cuisine at tasting menu venues.

Tasting menus, of course, do not possess a monopoly on splurge-worthy dining; there is no rule dictating that a particular cuisine needs a long prix fixe to evolve or accrue legitimacy.

But the format, when deployed smartly, has its benefits. A restaurant serving 15 courses has more room to push the envelope, while an appetizer-entree-dessert venue has to sate more conservatively and quickly. And inasmuch as these longer menus remain popular — and since there’s a perception among some that Chinese flavors can’t merit the same prices as their Western (or Japanese) counterparts — it’s righteous to see Chen and Gyamtso prove folks wrong.

There are, to be fair, other operators in this sphere. Corey Lee’s Benu in San Francisco rose to fame on lobster coral xiaolongbao and faux shark’s fin soup, while Kato in Los Angeles developed a following serving omakases replete with three-cup octopus and other Taiwanese delicacies. But in New York, an expression of Chinese fare at a prix fixe spot frequently means a nominal curtsy — a bit of XO sauce here, a dab of indiscernible Sichuan peppercorn there — rather than a deeper conversation with the country’s cuisine.

It’s for this reason that one might scoff at Red Paper Clip’s Sichuan peppercorn beef carpaccio, a dish on the a la carte bar menu. A sheath of crimson ribeye, no heavier than a ball of cotton, covers most of a white plate. Then you take a few bites and the scope of the preparation begins to expand. Slices of tendon express themselves in the form of a salty, chicharron-like puffs, while cilantro adds the type of fragrant aroma one might expect from one of the province’s beef dishes. And finally, that ubiquitous peppercorn zings the palate, not by numbing it into submission — a feeling that’s occasionally quite nice — but rather by imparting a round and complex bitterness. Visually, the dish wouldn’t look out of place at an Estela or a Wildair, but its DNA feels Sichuan through and through.

Then during a later visit, the same dish lacks any of the pepper’s profound nuances, or the cilantro’s assertive grassiness. It’s just another carpaccio.

Here’s simplicity at its best: Chen and Gyamtso coat a tangle of nori fettuccine in mushroom butter. This infuses the noodles with a rich, earthy flavor that recalls the verdant roundness of good matcha. Things are quite lovely. Until they’re not. During another visit, the first course, a tiny amuse of two oysters — one cool and the other plump and warm — takes 30 minutes to arrive.

Therein lies the the final storyline of the restaurant, which adopted the tasting-menu format in the dining room at the beginning of September. Underlying all this (relative) affordability is a tougher reality, which is that Chen and Gyamtso’s gastronomic reach sometimes exceeds their grasp. Red Paper Clip can fail in the conception or execution of key dishes — or in the pacing of the meal — in such a way that suggests this place isn’t ready to command the time or prices it does.

Or consider the lobster three ways. There’s rice cooked down with lobster bodies, which, aside from a few nuggets of meat, doesn’t really show off the deep flavor of the shellfish as it should. The butter-poached tail, while pleasantly oceanic, sports the texture of something left in the pot too long. And the fried claw, a take on the classic “salt and pepper” preparation, has no pepper flavor. Mostly, everything tastes good — particularly the claw, which packs all sorts of sweet essence of the sea — but it’s clear that the food isn’t living up to its own intellectual promise.

That criticism applies to the xiaolongbao agnolotti as well. They have no al dente snap; the noodle is largely limp and sometimes filled with just an inkling of porky soup. Occasionally that broth, which lacks the lip-smacking fattiness that makes a xiaolongbao so compelling, suffers from a lukewarm temperature. An act of fusion doesn’t need to mirror the dishes that inspire it; if that were the case, there’d never be any culinary progress. But it’s hard not to shed a tear when fine dining takes an everyday masterpiece and flattens it into something boring and expensive.

The late-summer tasting finishes off its savory courses with a few slices of tender, slow-smoked short rib, and then the meal comes to a somewhat abrupt end with a single dessert. The kitchen arranges dollops of rum bavaroise (thick whipped cream), chocolate mousse, a bit of chocolate cake, and miso caramel around a plate, topping off the affair with a thin dark-chocolate crunch. These “spreads” range from fluffy to sweet to, in the case of the miso, remarkably salty. Whimsical moments like these suggest that Red Paper Clip will eventually find its groove. For now, though, it’s a restaurant filled with ideas that don’t quite land on the plate. 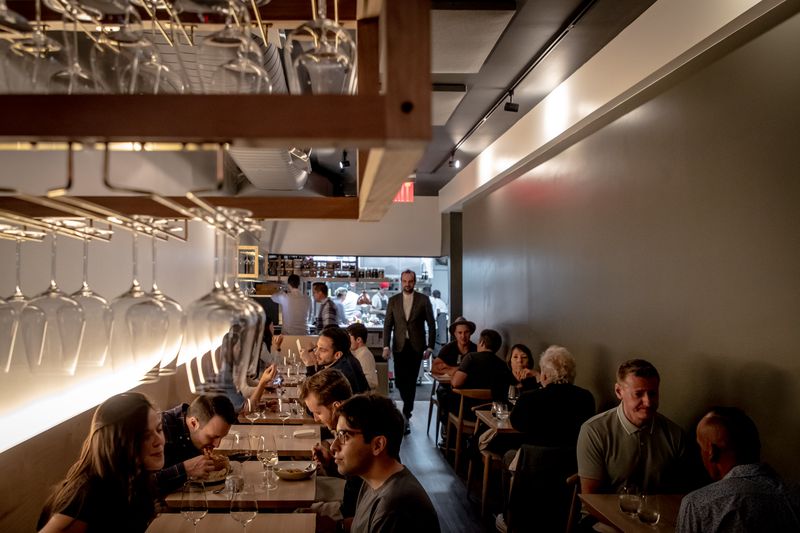 Cost: The dining room is tasting-only at $95 (gratuity is extra). The bar menu includes a tight collection of small plates at $18-$37.

Bonus tip: There is currently no list of wines by the bottle; the restaurant, rather, employs a “human wine list,” with whom you discuss your preferences. Patrons, of course, are handicapped by not knowing the range of prices. (“This isn’t intentional; we haven’t gotten around to putting together the list,” a bartender says.) In the meantime, go by the glass.