Review and information for Rezdôra

To fully appreciate the $90 tasting menu at Rezdôra, an ode to Emilia-Romagna via Gramercy Park, it pays to understand a thing or two about pacing and progression in high-wire gastronomy.

At a proper fine dining establishment, the kitchen never sends out a fat slice of wagyu or butter-poached lobster as a first course, nor does a tasting of yakitori or Korean barbecue typically begin with the namesake items. A chef likes to whet the palate with a starter or two before moving onto more substantial fare, as a series of energizing coming attractions precedes a good action flick at the movies.

But at Rezdôra, things are more direct. The tasting is just pasta. That means no fanciful appetizers, intermezzos, or, as is the case at Babbo, passionfruit dessert spaghetti. The night begins with noodles and, unless you order a lousy gelato or olive oil cake, the evening ends with noodles.

Mortadella-stuffed tortellini, each no bigger than a wedding ring, float about in a cloudy broth of capon (a castrated male chicken). The saline and sausage notes spark one’s appetite. That’s followed by maccheroni con pomodoro, wherein a bit of Parmesan imparts a zippy tomato sauce with a round, MSG-like savoriness. The feast crescendos with a fistful of ethereal tagliolini al ragu — more on that in a bit — and then finishes with anolini, little ham-stuffed ravioli covered in Parmesan fondue. A server drizzles 25-year balsamic all over them, a dark, agrodolce counterpart to the stark white sauce. It’s not quite dessert, but it’s enough of a cheese course to serve as the meal’s logical coda.

A pasta tasting, at its worst, is a gut bomb of a meal, but here at Rezdôra, the format recalls the lightness and ingenuity of a sushi omakase. That is to say: Each course is just a few bites, with subtle variations in richness, umami, and acidity expressing themselves within the confines of a form that might otherwise seem repetitive to a casual observer. Chef Stefano Secchi’s ability to make this feel like a complete meal, with all its fluctuations, suggests he’s only beginning to show off his true potential.

Rezdôra, which also offers a la carte selections under $30, marks a vital moment in the state of New York Italian dining. It represents a rare high-profile Big Apple restaurant led by a noted alum from Osteria Francescana. That three-Michelin-starred temple in Modena, led by the charismatic Massimo Bottura, is famous for its avant-garde approach to the foods of Emilia-Romagna. Think: a lemon tart that recalls a Jackson Pollock painting, or a dish called “Eel swimming up the Poe river,” which Bottura claims is “both recipe and fable.”

Alas, the only real resemblance Rezdôra bears to Francescana are the whimsical names of certain dishes. There’s “Cow grazing in Emilia” for a simple course of Creekstone beef. The cut sports a straightforward bovine punch and a neat little herb salad. “Grandma walking through forest,” in turn, is the long-winded moniker for green cappelletti. The noodles, which look like the cute conical hats that Robin Hood wore in the 1973 Disney cartoon, are topped with verdant spring peas, stuffed with sweet ricotta, and placed atop an earthy mash of black fungi. This is your salad course.

If Francescana is all about modernism, Rezdôra leans more smartly classical. This jibes with New York’s larger gastronomic pulse, which tends to favor technique, regionalism, culinary straightforwardness, and sleepy steakhouses over chemistry-like wizardry. But neither that reality nor the generic design of the dining room — plank floors, exposed brick, cramped two-tops, a white marble bar — detracts from the precise rustic cooking that occurs here every night.

When one thinks of Emilia-Romagna, a Northern Italian region that lies between the Po River and the Apennine Mountains, staples like Parmesan, prosciutto di Parma, mortadella, truffles, and ragu bolognese come to mind. Rezdôra delivers on all these fronts — and with more refinement than at, say, Michael White’s Osteria Morini, which pledges allegiance to the same region.

A charcuterie board will deliver all of the above in one fell swoop, but the gnocco fritto is the smarter delivery mechanism for these delicacies. Golden orbs of pita-like puffed bread sit below piles of salumi, their nuttiness heightened by the warmth of the boulangerie. Emilia-Romagna is also known for its insanely plump Vignola cherries, which Stecchi pairs with a sufficiently milky (and tiny) pile of stracciatella.

One could go on about those dishes, or the softly braised rabbit, matched with glazed veal sweetbreads. Really, though, the primary purpose of a trip to Rezdôra is pasta. About four portions make a light meal for two. Order any of them, from the spaghetti vongole, slicked in a clam sauce as concentrated as a quart of boiled ocean water, to the infrequently seen doppio tortelli. The latter holds salty prosciutto and oozy Parmesan foam in two separate “tubes.” Eating one, slicked in truffle butter, is like chomping on an Italian riff on a soup dumpling; when bit, it squirts out warm sauce with abandon.

Now let’s talk about that ragu.

Though often considered a straightforward dish, ragu famously became an exercise in the avant-garde with Bottura, who once asked “Could a plate of tagliatelle [al ragu] be at the vanguard in the same way as an abstraction of Parmigiano-Reggiano?” His restaurant elevated the staple by cooking the meats — which include beef cheek and veal tail — sous-vide for 24 hours, and it became one of his best-known dishes. Anyone who’s fallen in love with the cooking of Bottura will want to know how Rezdôra compares.

Secchi’s recipe is different. He simmers a blend of soffrito, pork shoulder, mortadella, ground pork, and salumi for eight hours with Parmesan sachets. When a patron orders the tagliolini, the kitchen emulsifies it in just a hint of tomato sauce and extra-virgin olive oil.

The cooking is finished in the sauce itself. The same could be said of any pasta, but what makes that technique so powerful here is the thinness of the tagliolini. Al dente isn’t the point. These are softer and stretchier, closer to the texture of rice vermicelli. They’re designed to absorb that wonderful ragu.

Some nights the sauce is thicker and pinker; other evenings, the slurry is looser. But on each visit, the ragu — smooth and devoid of coarse chunks — exhibits nuclear-level meatiness. One doesn’t necessarily taste the flavors of the component salumi; the experience rather conveys an otherworldly level of carnivorous umami. It will make your gums tingle. However rustic its sheen, the dish is as worthy of worship as any of the painterly creations coming out of the kitchen at Atomix.

The same, alas, cannot be said of the sweets. Gelati, from pistachio to stracciatella, sport a thin, almost icy texture and forgettable, saccharine flavors. In a city with so many good ice cream purveyors, Secchi should just ditch his product, which wouldn’t pass muster at a 7-Eleven. Generically soft olive oil cake, about on par with something from Entenmann’s, gets the job done with mediocrity, as does a passable tiramisu.

This is a bad dessert program. Better just to leave here dreaming of that ragu and relishing in the fact that despite the city’s ultra-crowded Italian scene, Rezdôra already ranks near the top. 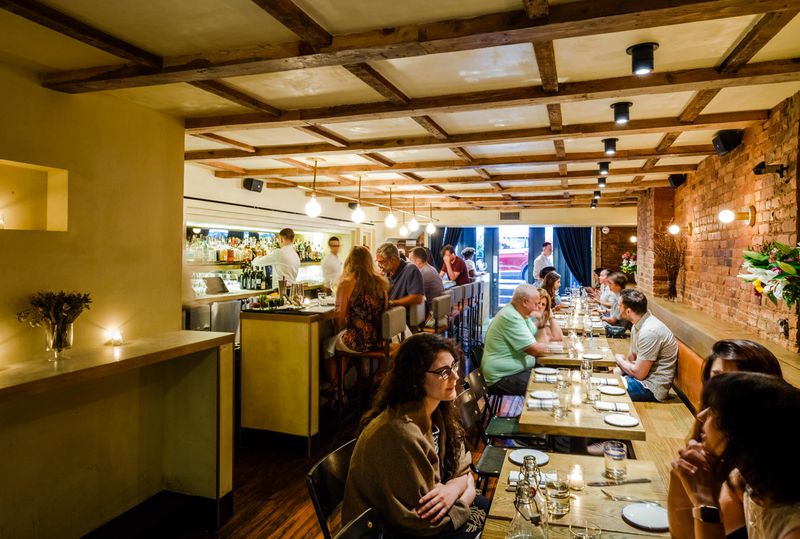 Bonus tip: Reservations can be tough to come by; consider booking a month out for any table before 10 p.m. Walk-ins can also expect 90- to 120-minute quoted wait times as early as 5:15 p.m. Try showing up later for a better shot at bar seats.