by Ryan Sutton Aug 27, 2019, 9:28am EDT
Photography by Alex Staniloff
The dining room at Pastis

Share All sharing options for: The Charm of the New Pastis Is That It’s the Old Pastis — Flaws and All

Review and information for Pastis

Voila: What was once an entire food hall, with myriad vendors and ample seating, is now a single chic French brasserie with two-hour waits. Welcome to Pastis 2.0, the rebirth of Keith McNally’s downtown gem that you might’ve first learned about (like I did) because Lindsay Lohan and other A-listers were slurping onion soup there in the aughts. The new location, run by mega-restaurateur Stephen Starr, sends out roast chicken, shrimp cocktail, and drippy burgers a few blocks away from the old location, which was torn down to make way for a luxury home goods retailer that, on its rooftop, serves roast chicken, shrimp cocktail, and drippy burgers. Really, this is a certain segment of New York in a nutshell: more of the same.

The thing is, in the case of Pastis, it’s generally a good kind of same.

The first incarnation, which fueled the nightly party that is the Meatpacking District, was born in 1999 as a Balthazar sequel of sorts. It simultaneously functioned as an affordable-ish hangout in an increasingly expensive nabe — remember when Samantha from Sex and the City revealed she paid $7,000 per month in rent here? — and a constant celebrity magnet. The partying was wild at times, but it never truly devolved into the type of Rich Kids of Instagram debauchery that nearby spots became known for; there were no dance-party brunches where magnums of Champagne came with sparklers or where jeroboams (if you don’t know what that is, you can’t afford one) triggered recognition by the DJ.

By Meatpacking standards, Pastis was chill and inviting. It still is.

When a hip burger spot I no longer patronize turned us away in 2005, Pastis took us in. And so we feasted on bacon-loaded tripe and drank Stoli orange martinis (woof). Things are a touch more crowded these days; a line of aspirants regularly snakes toward the door. No reservation? You’ll get quoted a multi-hour wait, though a host concedes that they hold back tables for regulars.

Now you know: Be a regular. Or be here at lunch when it’s quieter. Or be famous.

The second coming, like the first, remains a brilliantly fashionable place to people-watch. Why hello there, Dan Abrams and ex-Men’s Health dude-itor Dave Zinczenko (or his doppelganger), bro-ing it up in a booth. Such antics are more enjoyable than the filet au poivre, which is sometimes grayish and medium when ordered medium-rare, sometimes cold and blue when ordered rare. But the creamy pepper sauce covers up the flaws well enough, and oh, wait, is that John Mayer? At a table surrounded by women? Sounds about right. Let me munch on some bland king crab, and whoa, gosh, what a nice mop of hair that Mayer boy has. Another $16 daiquiri? Sure, why not.

The space is a near replica of the old one, from the worn wood planks to the dark banquettes to the zinc bar to every other detail that suggests the venue is 40 years old and not a few months young. McNally, who recently quipped that people go out to eat to escape their spouses, has hung so many artfully worn mirrors that getting caught cheating here is assured. Buy me a hard seltzer one day, and I’ll tell you about the nearby celebrity cuddled up to a person who was not their spouse.

That duo, with their aristocratic cheekbones, looked fabulous. So did everyone else. Anyone who’s dined at McNally’s restaurants knows they’re lit in a very particular type of gold, a hue that suggests that, somewhere in France, a quaint town exists where it is perpetually twilight. On a recent evening, after a glass of muscadet, I reached for a carafe filled with what appeared to be more of the precious liquid. Alas, it was a jug of water, magically turned to wine by amber bulbs that make everything soft and fuzzy.

Pastis, in short, looks, feels, and tastes like the old Pastis. Or the current Balthazar. It is a piece of nostalgia for an era that still exists, and for a type of food that is neither threatened nor in short supply.

Starr seems like a logical partner. He runs some of the city’s most distinctive and ambitious Gallic spots, fueling the haute throwback ways of Daniel Rose’s Le Coucou and the classic-modern cafe vibes of Marie-Aude Rose’s La Mercerie. Pastis, of course, is neither distinctive nor ambitious. It sends out basic, mostly well-executed brasserie fare. There is a pedigreed chef, but there is no bio on the website, no waiters who speak about him in reverent tones. They simply tell you how awesome the croque madame is. It is awesome. The haute ham and cheese sandwich — fat slices of toasted brioche, salty jambon, gooey Gruyere, and a sunny-side-up egg — functions as effectively at breakfast, lunch, or dinner.

Pastis has “devised a menu so traditional that virtually every dish could qualify for protection by the French Ministry of Culture,” New York Times food critic William Grimes wrote in 2000. The statement could as easily apply to the 2019 offerings: tangy beef tartare, cardboard shrimp cocktail, nutty trout almandine, cloying, one-note bouillabaisse that tastes like it never met saffron. And snails.

The snails are hot. They sit in little tubs of oil that bubble at the table. To watch someone consume an escargot too quickly is to watch the real-life version of Wile E. Coyote swallowing an ACME bomb. Let them cool, then let them squish around in your mouth like the amphibious garlic sponges that they are.

Those who order tuna ravigote will be no less pleased. A crimson circle of raw fish nearly takes up the circumference of a plate, lying underneath a verdant pile of mint, tarragon, basil, chive, and dill. Herring, by contrast, tells its story more rustically, as a series of masterfully butchered slices matched with halved potatoes. It is a fine study in salt, smoke, and maritime gelatins.

Should you order the roast chicken? Probably. The aggressive brining leaves the breast with a faintly springy texture, but after dredging the meat through rich jus, you won’t notice such details. The pairing is a giant bowl of mashed potatoes, equally buttery and starchy. But best of all are the lobster frites. The chefs roast a two-pound lobster, rip out its meat, drizzle it with about three pounds of garlic butter, and garnish it with fries for dunking. It tastes the way a good lobster should: like a sweetened version of the Atlantic ocean.

For dessert, order baba au rhum. A quenelle of cream looks like a cumulus cloud that’s about to be munched by an oblong Pac-Man cake. This being baba, the cake is naturally doused in rum. Lots of rum. I’ve had baba just about everywhere, and can say without qualms that this is the only place where there is enough booze leftover to do a half a shot from the bowl. One feels buzzed afterwards.

I like this place better than the old food hall.

Our review of Pastis 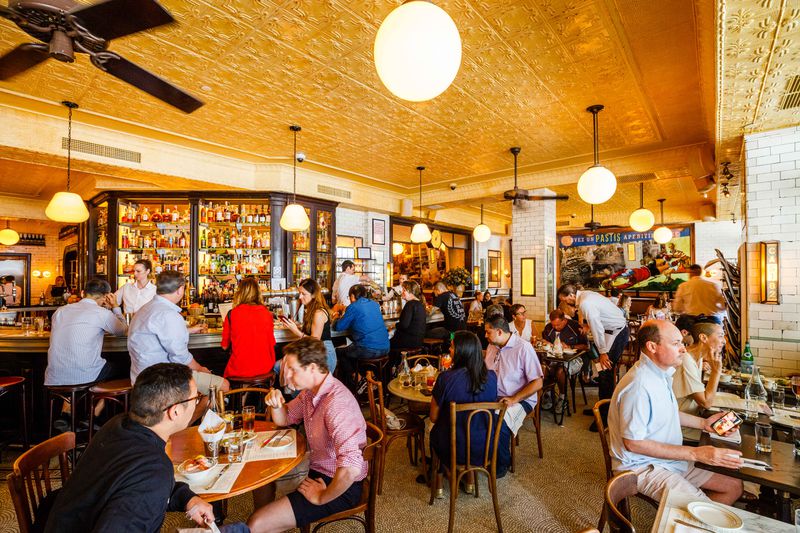 Bonus tip: If the hosts quote a multi-hour wait, tell the bartender you’re looking to dine; the wait shouldn’t be longer than an hour. Otherwise, scan Resy for cancellations. Also keep in mind that Pastis might just be closed for an unannounced private event the night you show up.