Review and information for Maison Yaki

The outdoor garden at Maison Yaki, a French-Japanese mashup in Prospect Heights, smells of charred meat and fresh wood. Servers ferry charcoal-grilled skewers slathered with sauces that bear names like maltaise and allemande, while the backyard deck radiates the pungency of sunbaked cedar. Two humans in shorts play pétanque, an old Provençal game similar to bocce. They take turns throwing steel balls, politely raking the gravel after each round, sometimes hitting the back wall where tiny strings of lights intertwine with creeping vines. And then, after a few minutes, a bearded host invites them back in for dinner.

On this evening, Maison Yaki is only a Slip’n’Slide short of qualifying as summer camp. And yet, the backyard acts as one of the most civilized waiting rooms in New York.

Fans of Olmsted, a garden-equipped sister spot across the street, know a thing or two about waits and reservations. Maison Yaki, a casual spot where literally every dish falls under $10, improbably boasts some of the same inconveniences as Olmsted, giving away its best tables a month in advance; the only availability three Saturdays from now is at 10:00 p.m. But the little secret is that the kitchen serves the full menu out back. Waiters balance the crispy beef tongue katsu sandwiches on ledges, right by the two pétanque courts.

As I wait for a friend one evening, I order a skewer of king trumpet mushrooms a la greque; the namesake lemon-wine sauce brightens up the meatiness of the fungi. At this point, the sky is starting to darken, and I’m cooling off with a fragrant yuzu gin & tonic. In this era where even an informal dinner can be planned with the precision of a Google Calendar invite, and secured with the threat of a Resy-backed financial penalty ($25 per person here), it’s nice to simply walk into a joint and eat standing up while playing alcohol-fueled lawn games.

A patron plays pétanque; a spread of dishes

Chef Greg Baxtrom, late of Stone Barns, has himself another winner here in Prospect Heights. And the good news is that the wait to dine indoors is much shorter here than at Olmsted, thanks to a 50/50 split between walk-ins and reservations. Kitchen counter seats overlooking the smoldering charcoals, or bar stools underneath the mini-indoor mushroom farm, turn over reasonably quickly on weeknights.

Evenings here trend more affordable as well. Draft cocktails, including wonderfully strong Manhattans and martinis, cost $9. A full meal for one — two small plates, five skewers, two drinks, tax, and tip — will run about $80, versus $115 or so at Olmsted. That’s not cheap anywhere, especially not in a neighborhood where the median household income hovers around $62,000 per year.

But relatively speaking, the prices are reasonable enough for a style of cross-cultural dining that doesn’t really exist elsewhere in the city. Maison Yaki is a cross between a French bistro and a Japanese yakitori spot, and most of the time, it’s a darn good one at that.

For traditional rillettes — confit meat in a jar — a thick cap of white fat helps preserve the slow-cooked proteins. But in the fanciful world of Maison Yaki, a layer of wasabi-ginger foam, doing its best impression of lard, sits above a mound of shredded duck leg. The frothy tweak cuts through the poultry funk with finesse.

The history of French-Japanese culinary exchanges isn’t a short one, particularly at the high-end. Most long tasting menus owe a big debt to kaiseki cuisine. Joël Robuchon’s chain of L’Ateliers, which helped spur the modern movement of precise small plates, took its inspiration from sushi counters. And oodles of modern Japanese restaurants freely employ foie gras, black truffles, and other continental indulgences.

But yakitori spots and bistros tend to be a bit different. Their cuisines are more codified. That doesn’t mean they don’t evolve; it’s just that they operate within a stricter idiom. A bistro or brasserie suggests very specific things: steak frites, onion soup, potato preparations with non-English names. The same goes for skewer spots, which reliably traffic in minimally adorned meats, particularly off-cuts of chicken.

What’s particularly clever about Maison Yaki, however, is that it somehow finds it creativity by staying within these strictures. Snails are still snails, piping hot and showered in breadcrumbs, but they also burst with the anise-y sucker punch of shiso butter. Baguettes are still baguettes, though the accompanying butter shocks the palate with a body slam of tart-spicy yuzu kosho; it’s closer to hot sauce than soothing dairy. Chawanmushi is no less delicately eggy than at omakase spots; Baxtrom changes the formula just a touch with summer truffles and Franco-style braised artichokes.

This isn’t contemporary globalism; this is classic fusion. Almost every Japanese-leaning dish has a striking French accent and vice versa. And the lesson couldn’t be plainer: historically fixed genres can retain their essence even as they change. A Korean barbecue spot doesn’t become any less of a barbecue spot when it adopts the sensibilities of an American steakhouse. A pizzeria doesn’t become any less of a pizzeria because it doubles as a modern natural wine bar. And a yakitori spot doesn’t lose its soul just because the chef makes his tsukune-style meatballs — typically forged from chicken — with ground lobster. The lacquered sausage that comes off the grill, which Baxtrom douses in an oceanic-sauce Americaine, conveys a maritime aroma on par with the finest Gallic seafood soups.

That’s not to say Maison Yaki couldn’t use a bit of work. The kitchen doesn’t always display the same technical prowess with Japanese grilling as it does with French-style saucing. This is not unexpected for a young venue. Cooking over open coals is a nuanced and difficult ballet. Watching a senior yakitori chef (or Uzbek grill meister) tend to their skewers is not entirely unlike observing a cartoon recluse water a pet orchid with an eyedropper. They tend to their craft with such care, it’s almost as if they’re praying as much as grilling.

The binchotan station at Yaki is a more frenzied affair, and it’s not always clear that the cooks are giving these meats their full attention. Gourmands know beef tenderloin takes well to sauces. Baxtrom translates this philosophy by applying the au poivre treatment to chicken tenderloins. The sauce itself is a work of art; it coats the tongue with a beefy, umami roundness, then jolts with a warming heat. The squishy little nuggets of tenderloin act as sponges for this fiery bliss. Well, except when the meat is overcooked.

Then there are leeks. They’re seared past the point of no return, essentially vegetarian mush on a stick. What saves the preparation is a vichyssoise sauce (a blend of potato and more leeks), adding a hit of bright, creamy buzz to the soft allium.

Skewered pork belly arrives hidden underneath a foamy dijonnaise, adding just enough tang to balance the richness of the swine. If only the swine exhibited the silky fats and crispy flesh that normally make pig belly so compelling. These are simply firm, hot cubes of meat.

One might logically ask about all the offal that typically define the modern yakitori spot. For now, items like gizzards and hearts only appear as specials, which is too bad because those off-cuts and viscera provide something that Yaki could do better with: texture.

The variegated mouthfeels one experiences at venues like Tori Shin — thanks to snappy knee bones and rubber band-like arteries — help break up the fact that you’re essentially eating a whole lot of hot, fatty meat. Baxtrom’s old-school saucery, which harkens back to the era of Careme and Escoffier, serves a similar purpose, which is to achieve a sense of balance. But still, it would be nice if more of the skewers exhibited more than the soft or faintly chewy textures that dominate a meal here.

There are worse verdicts, of course, than chomping down on a pillowy duck meatball. The kitchen doesn’t lace it with tiny bits of bone, as is the norm; the fluffiness puts it closer to an Italian meatball than a Japanese one. You dip the succulent poultry into a ramekin of soy and what looks like yolk. Turns out the egg is really an avant-garde sphere of fruit puree that pops with the poke of a chopstick. “Duck a l’orange,” the menu says. Very cool. Equally cool is Yaki’s rare textural masterpiece, two chicken wings on a skewer. The skin shatters like the top of a creme brulee, while the silky flesh underneath yields with more ease.

This is the appropriate way to end a meal here. Baxtrom didn’t initially employ a pastry chef at Olmsted, an omission he managed to pull off thanks to a masterpiece of frozen yogurt. And while there’s now a chef dedicated to sweets, the team hasn’t yet found that killer finisher here at Yaki, so for now you can skip the mealy Japanese cheesecake or run-of-the-mill profiteroles. Those who want to extend their stay can kick the dirt out in the backyard with a martini and a few steel balls.

Our review of Maison Yaki 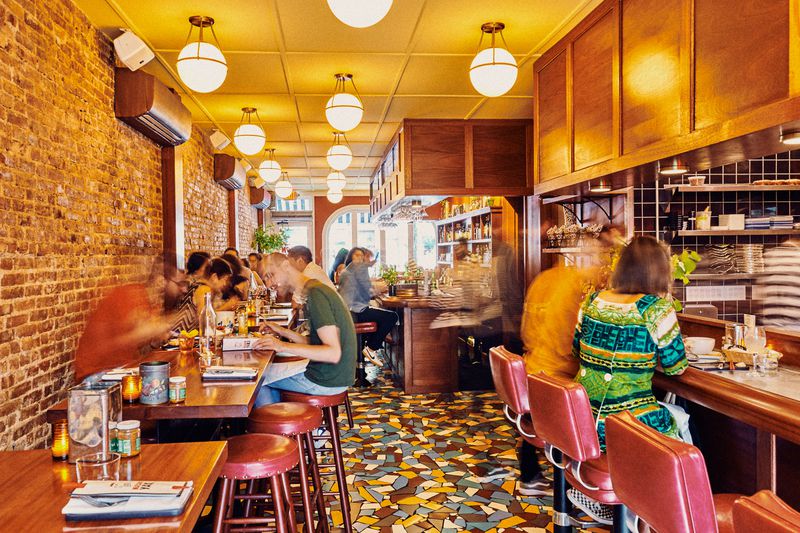 Bonus tip: Even though the best tables book out far in advance, about half the restaurant is reserved for walk-ins. Waits are more reasonable than at Olmsted — and sometimes non-existent in the later or early hours — but can hit 90 minutes at prime time.

Update: An earlier version of this review incorrectly stated that Olmsted and Maison Yaki do not employ a pastry chef. They now do.