The famous Chicago import is indulgent to a fault, and not nearly worth the wait that it commands at its Tribeca location

Share All sharing options for: Au Cheval Is a Meaty, Retrograde Misfire

Review and information for Au Cheval

To observe the flattop at Au Cheval, the New York spinoff of Brendan Sodikoff’s Chicago burger palace, is to witness black steel turn pink. The cooks here do not tend to verdant asparagus or springtime ramps; rather, they traffic in flesh, blood, and marrow. Beef patties and pork belly cover the griddle with such density that an intrepid cat could walk across without burning its paws. It is a carpet of meat. An Angus rug that sizzles. These burgers are why otherwise rational humans subject themselves to an inordinately long wait before dinner.

The Tribeca hotspot offers two optional toppings: a fried egg and a layer of pepper bacon — the kind that’s cut so thick it could stand alone as an appetizer. Those add-ons are for those who want, to borrow the words of a waiter, “the Instagram burger.”

I want no such thing. Twenty minutes later, my server sends over the standard model: two seared patties. They boast a handsome maillard char and a midlevel bovine punch. American cheese — or as I like to call it, yellow salt — folds itself into the brown nooks and crannies. This all goes into a golden brioche bun slicked with dijonnaise. It is a tasty burger. Then again, there is no shortage of tasty burgers in New York. That’s worth keeping in mind when a host says it’s going to be 90 minutes before you sit down.

Also worth keeping in mind: The signature item runs $27 with fries, placing it firmly within gourmet burger territory. Add the suggested toppings and you’re at $35, which places it alongside the DB burger as one of the city’s priciest. But while Boulud’s truffle- and foie gras-stuffed specimen is a veritable act of expert charcuterie, the Au Cheval burger, with all the fixins, is a gloppy, runny, everything-falls-out-when-you-bite-it expression of American junk food. It’s not quite in the same league as its peers.

Back in 2010, when the iPhone was still in its infancy, Apple sent developers a rather famous set of guidelines. “If your app doesn’t do something useful or provide some form of lasting entertainment, it may not be accepted,” the tech giant wrote, adding, “We don’t need any more fart apps.”

The city’s restaurant scene would benefit from a similar set of guidelines. To wit: Our New York doesn’t really need any more classic steakhouses or expensive burgers. There’s something positively head-spinning about a well-funded operator looking out over the cityscape and declaring, Gosh, New York could really use a few more ribeyes and Pat LaFrieda blend patties. And yet here’s Thomas Keller, bestowing Manhattan with a carbon copy of his Miami chophouse at Hudson Yards, and there’s Sodikoff, giving Tribeca a near replica of his Windy City spot.

The indulgent menu is nearly identical to the original; the only real difference is the digs. The room is smaller in Chicago, and the service is efficient. Here in New York, the ceilings are high enough and the booths are roomy enough to suggest a grand brasserie or prix fixe spot. Sodikoff, who made his New York debut with the ultra-exclusive 4 Charles Prime Rib (good luck getting a reservation before 11:45 p.m.), bills this as a diner. If that truly were the case, it would heed the cue of MeMe’s or Gertie’s, two venues that seek to rethink that dying form with a mix of nostalgia, generosity, and egg creams.

Sodikoff’s use of the term feels more ironic than honest. Is “diner” really the right description for a venue that books up between 5 p.m. and 10:30 p.m.? Where a host says “we’ll text you,” rather than invite you to hang out in the downstairs bar? Where the lighting is as dim as at a nightclub? Where food isn’t delivered as platters with sides, but rather ordered a la carte, as at a steakhouse?

In a city where affordability and accessibility feel under assault at every angle, “diner” isn’t a term worth ceding ground on.

Au Cheval’s food — unlike the bright, high-acid fare of the past few years — functions as a throwback to the fatty aughts or a hat tip to Chicago’s historic affinity for meat. The single burger comes with two patties and the double comes with three. Fried bologna is piled as high as a mini kakigori. Vegetarians don’t have much to work with here, save a not quite palate-cleansing green salad, a grilled cheese sandwich, or an omelet stuffed with too much chevre. Herbivores can also pretend the fries aren’t crisped in beef fat.

One might justify this as bucking trends, or as “transgressive cooking,” as my colleague Robert Sietsema put it. I’d counter that the prevailing philosophy at Au Cheval is to ignore accepted principles of good cooking, or of what normal stomachs and bodies can handle. That said, here’s what to order and what to avoid.

Chilaquiles: Traditionally, the dish consists of tortilla chips simmered in salsa. That much is true here, except Au Cheval stacks everything high and adds sour cream, guacamole, egg, and jalapenos. The chips and toppings are arguably more in conversation with American nachos than the Mexican staple, but it doesn’t suffer from the fusion-y sensibilities. The salsa is applied generously enough to offset all the richness.

General Jane’s Fried Chicken: A whole bird lacquered up in a honey-soy-ginger glaze. The exterior color recalls the dark, molasses-like hue of Pok Pok’s fish sauce wings, albeit with a touch less balance or complexity. Each bite yields a hefty crunch and tender flesh, with some of the fattier bits giving off a deep, poultry kick. Sprigs of cilantro keep the rampant sweetness in check, if only barely.

Eggs with foie gras: A moat of tawny shallot-sherry gravy spills across mounds of soft yellow curds. This isn’t a study in contrasts, but rather an essay in amplification; the eggs enrich the sauce, while the sauce adds salty, umami oomph to the eggs. The only thing that’s out of place are the knobs of foie gras, which are overcooked and only serve to pump up your bill. The cost is $28.

Root beer float: This concoction is more of a parfait, with interspersed layers of ice cream and soda. The result is a sundae that’s easier to eat than most floats; diners aren’t tasked with attacking a single globule of frozen dairy bobbing up and down as it melts. The root beer, incidentally, packs an assertive sarsaparilla sucker punch.

Mille-feuille: Pastry cream as thick as cheesecake sits between layers of puff pastry the color of milk chocolate. It is an excellent American tweak to the French classic.

Located down a flight of stairs, just before the restrooms, the Chicken Bar is where to pass an hour or so while you wait for a Friday-night table. The red-hued lighting is bewildering and blinding at first, but your eyes will adjust (though your phone’s camera will not). Here’s how to roll like a pro down here:

Try a hot chicken sando. The downstairs kitchen fries up three chicken fingers, seasons them with cayenne, ancho, and gochujang, and places them each inside a comically tiny bun. The poultry packs an intense salinity and an impressive crunch, and while the heat level is mild, a dose of Crystal hot sauce, available at the bar, should get the job done. ($10)

Avoid the bacon cheese fries. There’s not much going on here, just a pile of bland fries with underseasoned and underspiced bacon chili and cheese sauce. ($10)

Fries: The fries at Au Cheval have received the type of breathless praise that one would expect to see hanging above a Broadway marquee. Let me be brief here: They are fine. Sometimes they are crispy; sometimes they are not. The beef tallow adds no distinctive flavor or aroma.

The burger: A perfectly respectable burger, though a touch pricey at $27 with fries (or $18 without). The bacon-and-egg burger provides impressive flavors as well, but it’s a drippy, unstructured mess.

Hash browns with duck hearts: This isn’t a typical shaved potato hash; Au Cheval instead uses diced and roasted potatoes. The crispiness factor is more subdued. In any case, cooks slather the nuggets in mornay and duck gravy. This would be a reasonably nourishing dish at a roadside diner in, let’s say, Montana, after a long day of skiing and hunting elk. But one might argue such organ-y and carb-y indulgences don’t quite jibe with a hot and humid New York summer.

Broiled salmon: This is the sole fish option here. The kitchen, rather than letting the fish express its luxuriant oils, sends out a well-done slab of salmon. The menu promises brown butter and black pepper, neither of which are apparent on the product that arrives. The flesh has the texture of well-done tuna fish and comes with a side of what the waiter eagerly describes as “steak salt.” It tastes like any salt.

Chevre omelet: A classic demilune of scrambled eggs, folded over goat cheese and red bell peppers. This isn’t a bad pairing, per se, but the eggs are infused with such an obscene amount of butter and salt that the palate craves acidity, be it a zingier cheese or tart oven-roasted tomatoes. Instead, the chevre adds fat and the pepper adds sugar. It is a study in too much.

Bologna sandwich: The key to a good fried bologna sandwich is imparting the mortadella with a mid-level char, causing the edges to curl up like roni cups; the crispy bits act as a counterpoint to the meat’s intrinsic sweetness. Here at Au Cheval, however, the sandwich is simply a pile of warm, nutmeg-laced cold cuts on a bun. A slathering of melted cheese and dijonnaise increase the glop factor. A corner deli could do better.

Our review of Au Cheval 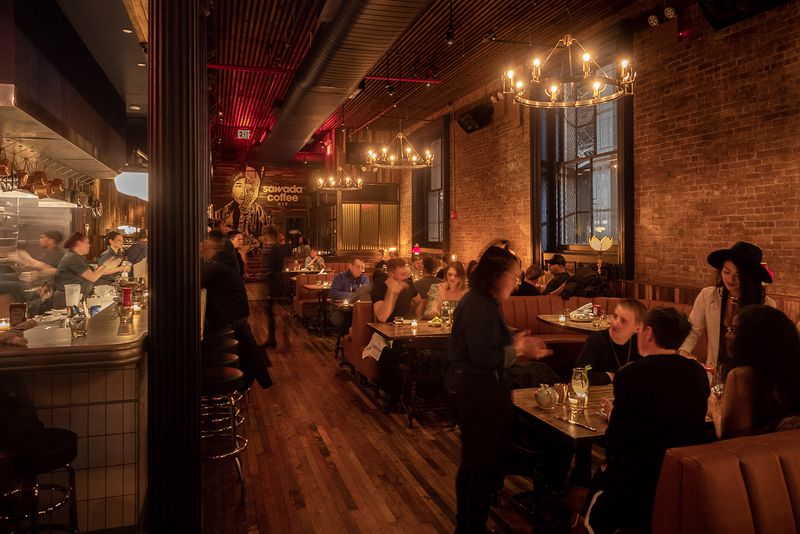 Bonus tip: Tables are released on Resy a week out and get snapped up quickly. Walk-ins during the off hours can face no waits; during prime time, waits can creep up past 90 minutes. Also: consider swinging by just for coffee, be it a pourover or a “military latte” (a creation that’s dusted with matcha and cocoa powder) at the Sawada stand inside.