Review and information for TAK Room

One of the strangest moments in late-night television came in 2004, when Adam Sandler asked Conan O’Brien whether he’d been to Per Se. The question made a certain degree of sense; Sandler played a fine dining chef in Spanglish. But still, celebrities appear on talk shows to seem relatable; they don’t go on about Lamborghinis or private jets. And yet here was comedy’s T-shirt-and-jeans everyman talking about one of the country’s most expensive restaurants, with O’Brien admitting he’d been there too. Sandler even mentioned the owner’s name, Thomas Keller, the American godfather of the $1,000 meal.

No other culinary icon is more responsible for raising the bar on how much U.S. diners pay for a single dinner. Other fancy venues had four stars, but in the mid-aughts, Keller had the high-end zeitgeist. He enjoyed high-profile consultancies on that Sandler flick and on Ratatouille. One of his top waiters penned a celebrated memoir about the nightly wizardry at Per Se.

The coverage and reviews helped normalize feasts that could last hours and cost as much as a bi-weekly paycheck. Per Se’s success — the Times named it the city’s best restaurant, at least for a while — fueled a new class of extended-tasting-menu spots. Journalist Jodi Kantor argued venues like Per Se contributed to spendier $40 mains across the country.

When Keller raises prices, others follow. This brings us to the case of TAK Room, Keller’s new endeavor at Hudson Yards. Most of its seats are filled on any given night. Its celebrity clientele has been documented by the Hollywood Reporter. But while it nominally specializes in midcentury fare, the true signature dish is more troublesome, both the way it’s executed and the frequency with which it intrudes upon every meal. That dish is the $100 entree. A single dish for one.

The $100 entree is not an outlier at TAK Room, a restaurant that largely mimics Keller’s Surf Club in Miami. More than half of the mains will effectively cost that much, after tax and tip. Keller is getting us to spend more, again.

Take the ribeye. It isn’t dry-aged, a time-consuming method that may warrant a higher cost; none of the steaks are here. It doesn’t sport the spinalis muscle, arguably the most succulent part of the ribeye, which has been butchered off for no good reason. It doesn’t even exhibit a particularly notable juiciness or beefiness. A spokesperson for the restaurant said the Snake River farms cut should rank from a 9 to 12 on the Japanese scale of marbling, which is about one would expect from ultra-expensive wagyu. In reality, the fattiness and flesh recalled the depth of something from Costco. It costs $106 after adding steak sauce.

Or contemplate the prime rib. “Two can share it, but it’s meant for one,” a waiter tells me. It costs $110 (or $142 post-gratuities and the like). Keller himself drops by to slice it, shearing off a slab that’s as thick as a lean paperback novel. He douses the mid-rare meat in enough jus to coat every inch of the meat and the plate’s inner rim.

Tax and 20 percent tip have been added.

It’s a very good prime rib. The flesh flaunts a clean, iron-y tang, while the exterior shows off a beefier, and salt-and-pepper, punch. The jus is just a bit richer than elsewhere; it ties everything together with a hint of MSG-style oomph. But is it any better than the more complex roast at Smith & Wollensky, whose dry-aging imparts a nice Roquefort zing? It is not. Is the service better here? During a final visit, waiters poured free wine like it was tap water, and managers, captains, and staffers practically sent me off with full military honors.

And yet during my prime rib night, I couldn’t get a martini until I was halfway done with my steak. No one stopped to say goodbye as we left, $500 poorer.

It might sound a bit strange to be criticizing a la carte dining in this context. The Keller devotee may even argue that the chef is offering a concession to New Yorkers by opening a restaurant that’s cheaper than Per Se.

Except that dining at TAK Room hardly feels like a low-cost gift. The beauty of a longer tasting menu like Per Se’s is that it allows for safe experimentation and salutary failure. Nine brilliant courses will outweigh four misses. With a shorter three-course meal, though, the chef has just one shot at that main course. And the pain of that single large dud is multiplied when the price is double what it should be, a scenario that occurs too often at TAK. The $100 main that’s “just okay” functions less like a psychological barrier that diners need to overcome, and more like an income test: Those who can’t afford it don’t belong.

The $100 main that’s “just okay” functions less like a psychological barrier that diners need to overcome, and more like an income test

If Pe Se, in its heyday, felt like a smart cultural investment, along the lines of box seats at the opera or a limited-run play, TAK Room takes on a different air. It belongs to a group of venues for which prices act not as a signifier of quality but rather as a cover charge. Harry Cipriani is the classic example, while TAK, alongside neighboring Estiatorio Milos, are the more modern ones. The a la carte format in this case lets the 1 percent flex their wealth — amid the company of their privileged brethren — without the burden of a four-hour meal or throngs of destination diners seeking culinary enlightenment. It’s just dinner.

To be fair: No one expected TAK to be a cheap hangout. Everything about it is grand, or at least faux-grand: its views of the Hudson (for a select few guests; some seats abut service stations), the sumptuous booths, the live piano player, the crudite amuses (food critics get osetra caviar), the semi-stale candied popcorn mignardises, the sheer expanse of the venue. One could literally fit a sushi bar in its foyer and a cruise ship waterslide on its carpeted staircase and it wouldn’t feel any less roomy.

The environs are about right for lobster Thermidor. The kitchen lightens up the heavy classic with a foam, Gruyere-lace bisque, using it to surround a silky (albeit tiny) tail and two powerfully aromatic claws. It’s essentially a large appetizer — quite nice if you have $110 to spare.

Thermidor isn’t the only old-school dish that appears; there’s also sauce Perigourdine, avocado Louis, and celery hearts Victor. TAK Room would be well served to offer descriptions, but the only preparation to receive any type of narrative explanation is the strip steak. The large menu blurb, which is more of a sales pitch, describes the Japanese-Angus hybrid as “the best of both worlds,” and as a meal “for two or for one.” It is among the first items a waiter might recommend. The sixteen-ounce entree costs $206 after tax, and tip.

One wishes a steak so rich could come in a portion that’s a quarter of the size — and price. But the goal here is anchoring, ensuring that high-cost dishes make all the other items seem less preposterous by comparison. Perhaps the $30 eggplant Parm doesn’t seem like such a bad deal in this light. Until you sample it. It’s effectively a bland mash of textureless nightshade in a tomb of mozz and sandy breadcrumbs.

Oxtail consomme ($32) is the smarter choice. The meat’s natural gelatins cause one’s lips to stick together, while the broth itself is pure black truffle intensity. Dover sole also does what it should, acting as a soft, flaky conduit for capers and lemon. Still, it is little different from any other sole preparation anywhere else in town.

When one thinks of TAK Room, it’s hard not to draw comparisons with the Grill in the old Four Seasons space, that atavistic temple to power. The midcentury-minded spot puts quite a few mains in the $100 club. But many of the entrees fall way below that mark. And the Grill casts a wider net on the past, serving up stellar fare that simply isn’t available elsewhere, from Amish ham steaks to pasta with duck organ juices.

TAK Room’s interpretation of yesteryear is narrower and more subtle; it doesn’t feel that different from most contemporary bastions of beef. Steak tartare is distinguished by its mediocrity; it is simply cold cubes of steak with a one-note vinaigrette. Tableside Caesar salad lacks any of the anchovy or Parmesan umami or buttery croutons as elsewhere. It is cold lettuce with dressing. The $26 crabcake is a study in bland meat and a lot of breadcrumbs. Black truffle fettuccine ($46) almost entirely masks the tuber’s earthy flavor in hot cream. The texture is sludge.

Better is the Wellington for two ($138), a wonderful riff of the classic, nixing bland tenderloin for a mid-rare short rib that’s almost impossibly heady. The beef needs the pastry crust, (spongy) mushroom duxelles, and truffle sauce to keep its powerful aromas in check. Too bad a smaller, more affordable portion isn’t available for less.

There’s something to be said for a whole fish spot saying, “This is how big our turbot is, we only have one left, and we charge by the pound.” Steaks, however, are the product of in-house butchery. A restaurant that wants to charge less can simply use a knife.

Keller is making a choice. He’s making a choice to charge more, just as he’s made a choice to build his more affordable and creative full-service concepts elsewhere, concepts such as Ad Hoc and La Calenda, a Oaxacan spot in Napa Valley. It would be a shame if the takeaway for developers was that we need more restaurants like TAK Room, restaurants where the $100 entree is not just a viable but a desirable goal for more owners and operators to pursue. Sure, it works here. It will likely work elsewhere; there are enough bankers to charge ridiculous prices. Keller knows how to issue a premium on wealthy New Yorkers for fancy food. Now it’s time for him to show he can do something ambitious for the rest of us.

Our review of TAK Room 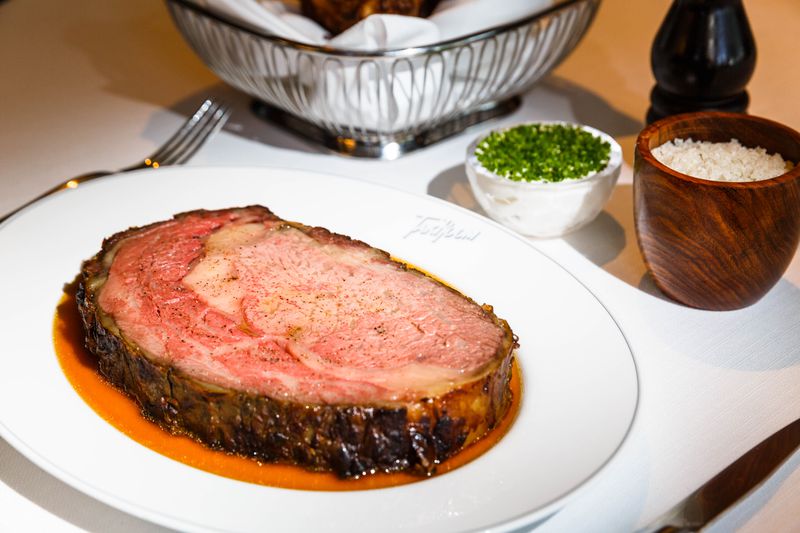 Bonus tip: Candied bacon is the side dish of choice. Think of the salty-sweet, lacquered pork belly as a mini Honey Baked Ham for $16. Also: The bar and lounge area accommodates walk-ins, and the full menu is available there.