Review and information for Kawi

Any acolyte of Gallic gastronomy knows that a fine way to celebrate the unctuous bliss of shellfish is to gel it. Thomas Keller devotes nearly 400 words to the complex technique in his seminal French Laundry Cookbook; the late Joël Robuchon, in turn, practically fueled a worldwide empire with his lobster gelee, setting it in clear jars as if it were a Fabergé egg.

Any adherent of Korean cuisine, however, knows that an easier but no less stunning way to achieve this effect is to throw a few raw crabs in soy sauce, let them marinate for a while, and then eat them raw. This is called ganjang-gejang, and to consume it means to experience the pure, unadulterated jelly of the sea.

It’s not a dish that has achieved the ubiquity of uni or fluke ceviche. If you’re enjoying raw soy crab in the five boroughs, odds are you’re dining at a select group of rustic Korean spots. The slithery meat hasn’t regularly found its way onto brasserie shellfish plateaus — or into the city’s thriving community of more creative Korean hangouts. In fact, when South Korean first lady Kim Jung-sook visited the Big Apple in 2017, she jetted over her own ganjang-gejang for a dinner in Flushing, claiming, correctly, that its availability was limited in the U.S.

Enter Eunjo Park. The chef, who grew up in Seoul, runs Kawi, the most resolutely Korean member of David Chang’s internationalist Momofuku empire. She is here to give us dry-aged steaks, pricey wagyu rice cakes, and a high-profile platform for that crab.

She prepares the meat classically, letting female crabs soak in soy before chopping them into quarters. The flesh itself is translucent. It dissolves on the tongue like hot bone marrow — except the crustacean is cold, salty, and sweet, with a delicate tidal whiff. Koreans traditionally spoon the crimson roe over rice themselves; Park does the work for us, mixing in the eggs to give each grain a richly velvety mouthfeel. This all begs for crisp sheets of gim (dried seaweed), which are provided for making wraps. But really, the main event here is a singular one, and that is sucking out the meat from speckled oceanic appendages.

The raw crab is above; below, Eunjo Park works the pass at Kawi

Modern Korean food is New York food — no less so than any pastrami hut, trattoria, Sichuan spot, or South American food hall stall. The movement isn’t dependent on the Momofuku brand for legitimacy; it’s already thriving across the city, at packed venues like Haenyeo, Cote, Oiji, Atomix, Her Name Is Han, Soogil, Hanjan, and too many others to list. But the addition of Kawi to the ranks certainly doesn’t hurt. Indeed, it’s heartwarming to see a superstar operator show up to a $25 billion complex that’s become a bastion of bland steakhouses and use it to represent dishes that are still largely underrepresented, or undervalued, throughout the country’s fine dining scene.

Take kimbap, maki-like rice-and-seaweed rolls that are more commonly found at Asian takeout spots. Park goes for a bit of elevation with these, stuffing them with buttery foie gras, torched short rib, and best of all, sweet omelet chunks and dried anchovy. On the side is a two-ounce tin of trout roe to amp up the umami. It’s not cheap at $50, but the mix of salt, sugars, and oceanic oils make it one of the city’s more affordably generous caviar services.

New York does not suffer from a shortage of tteokbokki (spicy rice cakes), but no one quite prepares a version of this delicacy like Park. She pipes the tteok into a single pinwheel, pan-fries it in chile jam, and tops it off with Benton’s smoky mountain ham. The net effect of this cross-cultural alchemy is a blood-red product sporting the dense chew of a firm steak, the fire of hot wings, and the complex, nutty porkiness of Spanish Iberico. Even amid the city’s crowded Korean scene, Park, who’s worked at Ko, Per Se, and the three-Michelin-starred Gaon in Seoul, makes stunning fare that feels no less urgent.

Momofuku, born from an East Village ramen shop in 2004, now boasts 11 restaurants on two coasts, with outposts in Sydney and Toronto to boot. Expansion at this level has typically involved standardization and replication; one could literally have the same meal at a dozen Nobus across the world. Chang has avoided this conundrum so far. As he’s moved from the role of chef to interplanetary restaurateur, he’s cultivated a cadre of lieutenant chefs who are building restaurants with personalities of their own, from Paul Carmichael’s Caribbean-Pacific tastings at Seibo in Sydney to Max Ng’s Singaporean-accented dishes at Ssäm Bar.

Even amid the city’s crowded Korean scene, Park makes stunning fare that feels no less urgent

Times critic Pete Wells touched on these themes in a fine essay from last year, but a significant question remained: Would Momofuku be able to keep up the creativity after taking on an infusion of funds from RSE capital? Apparently, yes. Just as Chang has lit gustatory fires in sleepy hotels and casinos, the two restaurants he’s opened in posh shopping centers this year — not exactly paragons of innovation — have been as interesting as anything from his early East Village days.

Kawi has some of the strongest flavors and spice levels of any Momofuku. Park deploys a sweet pepper sofrito to tame the funk of tiny raw clams — but only barely. She sends out spicy tuna kimbap that packs a level of heat more characteristic of a competitive eating contest. But because this wouldn’t be a true Chang spot if the rustic and refined weren’t juxtaposed, Park whips up a smash of a tofu dish too. She tops a layer of soft soybean curd with torched sugar. At the table, a waiter pours a ramekin of salmon roe on top. The layering of crunch, sweetness, silkiness, and slipperiness, all in one bite, with a yuzu perfume to boot, is as good as any Jean-Georges Vongerichten masterpiece. Call it tofu brulee.

The setting for these indulgences is nothing too spectacular, and that’s not a problem. Chang has never been about vistas. Kawi is simply a windowless room filled with dark woods, soft banquettes, and classic rock. There is no view of the Vessel, thank goodness, only a view of what matters: the open kitchen, where Park wields a blowtorch with aplomb.

The fact that there hasn’t been much debate over Kawi’s prices likely constitutes a minor victory, or a least a dose of hope for a pantheon of immigrant chefs who have struggled with the burden of being viewed as cheap. One of the longstanding riddles of the culinary world is that the chief difference between an order of dumplings and a plate of ravioli is 10 bucks.

But things are changing. In an era when Korean tasting menus can command $700 for two, it’s perhaps not surprising that rice cakes, which typically run $13 or so, can scratch at $40 after tax and tip here.

Tableside service is included. A server drops by to dip into your wagyu ragu with golden shears. He takes each tteok, as long as spaghetti, and snips it into bite-sized gnocchi. The creaminess of the cake achieves a symbiosis with the savory meat gravy. Kawi makes its own rice cakes using an extruder; most restaurants buy theirs, and the result is a product that’s softer, lighter, and more tender than elsewhere.

That process costs money, but in an exorbitant mall, it’s worth not overlooking value. Inasmuch as Chang complains about overpriced pasta, most Italian spots are nice enough to do half portions for a lower prices. The giant wagyu ragu could, at $35, could easily be downsized. Same goes for the cakes coated in Parmesan and (flavorless) summer truffle, which overwhelm the palate after just a few bites. Even the chilled chickpea noodles are expensive by any standard; one dips the firm pasta into a cool pool of sesame sauce, making for an excellent spring tsukemen of sorts. This easygoing dish runs a steep $28.

The real deal at Kawi, however, however, is the chicken for four. Park slowly roasts a breast, skins it, and lies it over rice noodles for a warm, comforting feast. In a separate bowl sit all sorts of wings, drumsticks, thighs, and errant pieces of skin. They’ve been fried, sans batter, for a pure chicken crunch. A generous sprinkle of togarashi adds just the right amount of salt and heat. At $67, the dish is easily chicken for two, with enough leftovers for days.

There is no printed dessert menu the kitchen uses the power of sound to market its signature sweet. Anyone who sits near the chef’s counter will hear the soft thumping of the bingsu machine, the Korean term for kakigori. The pulsing is soothing and repetitive, not unlike windshield wipers. Ice piles high in a wooden bowl, which a chef squirts with syrup and whipped cream. The flavors here are subtle and almost monochromatic. You dip your spoon into the volcano-shaped dome, retrieve a mass of snow, and let it dissolve on the tongue into pool of warming ginger.

It’s tempting to wish Kawi was literally anywhere else, but if it can act as a calling card for modern Korean, a beacon for tourists who might not have otherwise engaged with it, this restaurant is arguably right where it should be.

Our review of Kawi 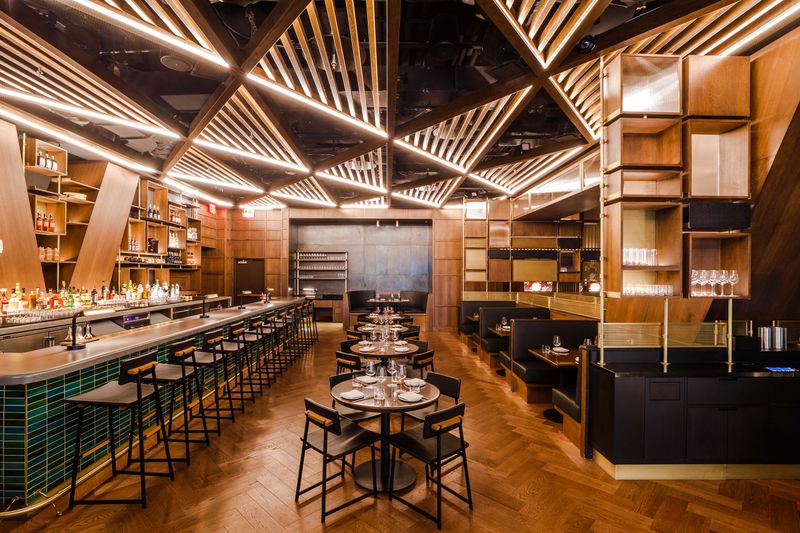 Bonus tip: Don’t sleep on lunch, the only time to sample the rice cakes with Benton’s ham. A midday meal will give you enough time to hit up Peach Mart next door before it closes; try the black sesame and butter sandwiches, or stuff a collection of Asian candies (including Hi-Chew) into a long takeaway tube.

Disclosure: David Chang is producing shows for Hulu in partnership with Vox Media Studios, part of Eater’s parent company, Vox Media. No Eater staff member is involved in the production of those shows, and this does not impact coverage on Eater.