Share All sharing options for: Wild Ink Is an Overwrought Yet Underachieving Fusion Disaster at Hudson Yards

Review and information for Wild Ink

Something unusual happened during a recent visit to Wild Ink, a restaurant whose lounge offers bucolic vistas of a Louis Vuitton store across the hallway. My server suggested a few dishes on the Asian fusion menu, and then added, without prompting, that she could “not recommend the bulgogi puffs.” It was a curious statement. I hadn’t asked about the bulgogi puffs, nor was anyone nearby tempting me with their puffiness or bulgogi-ness. The waiter simply felt the need to warn me, preemptively, that a signature preparation was garbage.

So I did what any other normal diner would’ve done. I ordered them.

Three little empanadas, filled with marinated beef, arrived minutes later. I winced as I took a bite. Chefs infuse the meat with inhumane levels of sugar and salt; if the kitchen had any sense of balance, the meat might be accompanied by kimchi or lettuce wraps to keep the seasonings in check. Instead, the pies are glazed in a creamy white-cheese sauce. It turns mealy and sticky quickly, causing the puffs to adhere to the plate like a gum on a shoe.

In place of classic bulgogi, diners are treated to a veritable Frankenstein of a dish, an unholy triad recalling microwaveable Hot Pockets, airline Korean food, and hospital-quality Welsh rarebit. The bartender asked me how I liked them.

Consider this review to be more honest than whatever my reply actually was.

Wild Ink is a wild trip of a restaurant. The 175-seat space is located on the fifth floor of Hudson Yards, a shiny new Manhattan neighborhood that recalls the sterile dystopian metropolis of Demolition Man. The sound system blasts the type of Mac Miller remixes one might expect to hear at a Times Square H&M. Cooks and waiters sauce dim sum themselves, as if they were omakase sushi chefs priming each morsel for perfection. The unfortunate result is that the dumplings turn to mush.

Sometimes hosts don’t greet you because they’re staring down at their phones. In fact, managers can be so unaware of things that one night, a touchscreen menu outside inadvertently displayed an unlocked version of the Resy table-booking service, displaying the names of the guests and their phone numbers to anyone who clicked through. At least I got to search my pseudonyms!

If there were anything to get truly excited about, it was that Wild Ink marked, for a brief time, the New York return of Tien Ho. When it comes to mashing up international traditions, few are more skilled than Ho, whom Wild Ink’s London-based parent company, Rhubarb, hired to consult on its new projects. The chef helped bring David Chang’s Momofuku Ssam Bar to the center of the culinary universe in the mid-aughts, mixing Korean, French, American, and Japanese sensibilities into an ambitious, affordable small-plates menu. He followed up with breathtakingly cross-cultural efforts at Ma Peche and Montmartre. And then he suddenly left the world of day-to-day cooking, taking corporate gigs at Whole Foods and Morgans Hotel Group.

The scene at Wild Ink, plus lamb momo and mapo tofu dumplings

At Hudson Yards, his official title was culinary director for Rhubarb U.S., the local outfit of the British-based group famous for its insipid restaurants and catering venues. Just as his old boss, Chang, had evolved from a chef into a restaurateur, Ho was moving into a supervisory role as well. He had been working for “several months” with the Wild Ink team, per a spokesperson for the company, but less than eight weeks after the restaurant opened, Rhubarb and Ho announced they were parting ways. It just “wasn’t the right fit long term,” Ho said. The fact that Wild Ink says that no major menu changes are expected suggests things won’t get better.

Take the mapo tofu dumplings, created by chef Peter Jin. The point of this Sichuan speciality is to accent the silky squishiness of tofu with numbing peppercorns, fiery chiles, and maybe a bit of umami-packed pork. Jin, by contrast, cuts the soy into nano-sized cubes and stuffs them into fried wontons with an indistinct ragu. The wrappers turn soggy quickly, because the kitchen pre-sauces these guys, too.

The mapo bears almost no resemblance to its namesake dish. The same can be said about General Tso’s sweetbreads, which are more akin to Heinz 57-flavored chewing gum than the Cantonese-American staple.

There’s nothing intrinsically wrong with fusing diverse cuisines, experimenting with classics, or upscaling rustic preparations; Ho was once a master of this. These techniques can be an excellent way to get close-minded diners to venture outside of the false confines of authenticity, to expose patrons to a larger array of diverse cuisines, and to get everyone to think more carefully about the cultural makeup of a given dish.

But the mapo disaster shows how things can get dicey when dishes are ripped from their original context and manipulated into something nearly unrecognizable. It’s hard not to be cynical about a creative process that sometimes feels guided less by taste or genuine inspiration and more by the type of profit-driven formulas that transform beloved classics into the type of click bait-y, Instagram-y dishes one might find at a clubstaurant or Cheesecake Factory.

Like, did Jin really have to fry bulgogi and mapo into “this-won’t-stain-your-shirt” finger food? Does a shumai dumpling really need so much bacon that you can’t taste the overcooked shrimp? Does cold Chinese celery need to be turned into yet another bland “add-seared-tuna” salad? Is it not completely mental that this is the only restaurant serving Chinese food in a brand-new neighborhood?

Perhaps most frightening of all is that Wild Ink appears as crowded — if not more so — than Chang’s much better Kawi on any given night, with revelers knocking back bland matcha vodka mules and munching on celeriac root skewers as undercooked as raw potatoes.

If someone does drag you here, the beef tartare is simple and excellent, with cool chunks of beef lit ablaze with hot mustard. Crab rangoon boasts a clear shellfish aroma and a remarkably light fry. Yuzu risotto is a smart bet, too. It’s a simultaneous ode to Japan and Italy, with the citrus cranked up to levels so insane that one could sell this dish as a scented candle. And yet, the fruit never manages to overpower the creamy rice or heady mushrooms. It’s a loud, beautiful creation.

And roast duck is passable enough, if you can make do with the dry confit leg and sinewy breast with under-rendered fat. That’s not quite a compliment, but the preparation is more forgivable than the scallops with dal. One could imagine a genius pairing here, with the kitchen juxtaposing the creamy, earthy lentils against sweet, caramelized scallops. Alas, Wild Ink plates such gritty legumes that they inadvertently act as an ode to the sandiness of poorly cleaned shellfish.

Rice pudding, too, does little for the palate.The grains, hidden under slices of mango, have been cooked into mush and chilled into a flavorless chokehold. Pineapple upside-down cake, in turn, is simply a fine, forgettable riff on the midcentury classic, with ginger ice cream tempering the fruit’s sugars.

Wild Ink poses more questions than it answers: Did Ho simply not monitor Jin closely enough? Had he lost touch with the city’s changing culinary scene following his absence? Did the Rhubarb folks issue a cruel clubstaurant food mandate, arguing they’ll sell better with the mall crowd? Will things be this mediocre when the next Rhubarb spot opens at the Hudson Yard observatory? Whatever the answers, let me end by paraphrasing the words of my honest bartender: I can’t recommend that you eat here.

Our review of Wild Ink 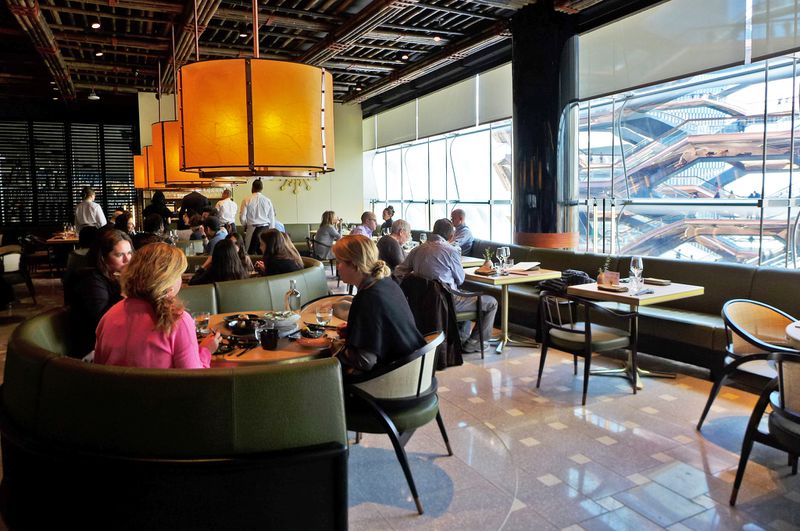 Bonus tip: For those who find the Vessel aesthetically pleasing, Wild Ink’s dining room tables offer some of the most direct views.