In the West Coast meat world, few names carry the import of Belcampo. Anya Fernald founded the restaurant and butcher chain in 2012 as a humane (and expensive) alternative to the industrial meat complex. She achieves such nobility through vertical integration; Belcampo owns not just ample farmland, but abattoirs designed by animal welfare expert Temple Grandin. According to a New Yorker feature titled “Can Steak Save the Planet?” an animal handler that has known a doomed cow since birth whispers in its ear before a bolt gun renders it unconscious. The grass-fed bovines live longer before slaughter, which the chain says gives the meat “richer flavor and better marbling.” The company even holds O magazine-touted $1,750 “meat camps” to teach consumers about responsible farming.

Belcampo’s East Coast debut sounded like it could be game-changing entrant into New York’s meat scene. It is not. The restaurant, tucked away in an almost hidden corner of Hudson Yards, is simply where to get an affordable steak or burger in an expensive mall.

The concept is admittedly a welcome one here in Hudson Yards, a development where a single ribeye can run over $100.

Belcampo is where you go when you don’t have a reservation elsewhere or when the family is with you. The dining room piece de resistance is a giant glowing sign above the bar that says “BELCAMPO.” It is a very branded ambience.

This does not seem like the Belcampo Jonathan Gold once wrote about. The late, great, Pulitzer Prize-winning food critic sang praises of beef heart and goat tartare and “gloriously pink and juicy” roast beef on buttered toast. Other West Coast locations tout slow-cooked lamb with harissa and pork porterhouses. There are no such wonders at the Hudson Yards Belcampo. This is not date food, nor the type of food whose quality would cause a cold-hearted skeptic to adopt a more ethical style of eating. This is shopping food.

The standard steak frites ($28) is a sirloin that the cooks grill over gas, slice, and serve with bearnaise butter. Grass-fed meat can be a beautiful experience; I recall filets that pack a vibrant, natural acidity. Belcampo’s sirloins, sadly, turn out bland and chewy, underseasoned and unevenly cooked. Virtually the same could be said of most burgers here.

The progressive farm-to-table ethos does not extend to the beverages. Anyone pairing their beef with a nice red will encounter a fairly generic cabernet, pinot, or syrah. It will be served warm. You will not see the bottle, never mind get a pre-purchase taste. There are no funky orange whites to pair with any of the sustainable fare.

Still, there are some gems. When it opened, Fernald said that she expected most of her customers to be people who live and work at Hudson Yards. If you’re one of those people — or if you’re someone who simply ends up at the mall without a reservation — here’s a rundown of what to order and what to avoid.

Tartare or carpaccio: These are spot-on versions of the ubiquitous classics. The carpaccio, whose hue falls somewhere between pink and crimson, is sliced paper-thin. Flecks of fleur de sel shimmer on the surface. The meat weighs little more than lettuce, yet its round savoriness still softens the blow of peppery arugula. As for the tartare, it’s better than Thomas Keller’s more luxe version at nearby TAK Room. Neat little piles of capers, onions, scallions, and pickles sit above a disc of soft, cool beef. Most chefs like to mix in everything for the patron; this semi-deconstructed version evokes a good caviar platter in its elegance.

Duck poutine: Fries get slicked in beef gravy and topped with crispy bits of duck thigh here. The flavors seamlessly align with their component ingredients. The meat is gamey. The fries are crispy — until they turn gorgeously soggy near the bottom — and the gravy is umami-rich. The cheese curds are firm and clean, providing a respite from all the salty, nourishing goodness.

Chicken Caldo: This is a nourishing and affordable soup. For $12, you get a giant bowl of poultry bone broth laced with lime and tinged with warming achiote. Heady forkfuls of shredded thigh meat float alongside big slices of avocado.

Tallow Fries: This $12 side comes fried in either duck fat or beef fat. Neither, however, exhibit the multilayered flavor profile of a proper tallow fry. They’re just run-of-the-mill, above-average frites, crispy on the outside and fluffy within.

Merguez sausage: Juicy and smoky, the sausage boasts a clean snap. A solid $8 side.

Lamb burger: This is the only good burger here ($16). The lean meat isn’t as rich or silky as the famed Breslin version, but that also means it’s easier on the digestive system. Each bite provides a medium punch of salt and funk, while alfalfa sprouts impart a touch of pleasant grassiness. Just one problem: The cooks apply so much drippy aioli that the bun instantly turns to mush.

Satay chicken salad: This includes smoky grilled breast meat over a pile of lettuce varnished with sweet-sour dressing. Push aside the mushy cherry tomatoes. This isn’t quite an ode to the aromatic skewers of Indonesia, but for mall food,it gets the job done.

Regular fries: Underseasoned and undercooked ($6). They’re a fine advertisement for the $12 tallow fries, which are really your only option here.

Tallow tenderloin: Tenderloin prepared correctly can be a wonderful thing. But at Belcampo, the butchers’ effort to age the cut in tallow is in vain: The filet ($56) channels its reputation as the bland chicken breast of the bovine world. The overcooked interior is barely salvaged by a sticky veal reduction sauce.

Charcoal-rubbed ribeye: Imagine the flavor of a regular ribeye, but deprived of silky fats or deep flavor ($80). My meals here were possibly the first time I’ve ever experienced a steak that’s simultaneously medium rare and dessicated. The level of salt is so high that the steak tastes cured. The exterior cap, often the most flavorful and succulent part of the steak, has been overcooked to the point of Dracarys-style carbonization.

Double Fast: This is the restaurant’s classic double burger ($12). The kitchen manages to incinerate the meat in such a way that it’s entirely gray and overcooked within. On one visit, the exterior was bereft of a salty char, while on another, there was excellent char, but still no salt or beefiness. The dominant flavor profile is mustard.

Dry-aged burgers: The 28-day patty is a thoroughly average entry into the crowded restaurant-burger field ($16). The underseasoned meat isn’t quite dry, but it isn’t juicy either. A mound of caramelized onions and white cheddar provide the bulk of the flavor, while the meat itself it little different from any generic diner burger. The 100-day burger ($28) boasts almost zero dry-aged flavor. It’s just a pile of tender meat on a bun, undercooked to the point of mimicking the texture of pate. If you’re going to spend this much on a burger, go to Minetta Tavern.

Our review of Belcampo Meat Co. 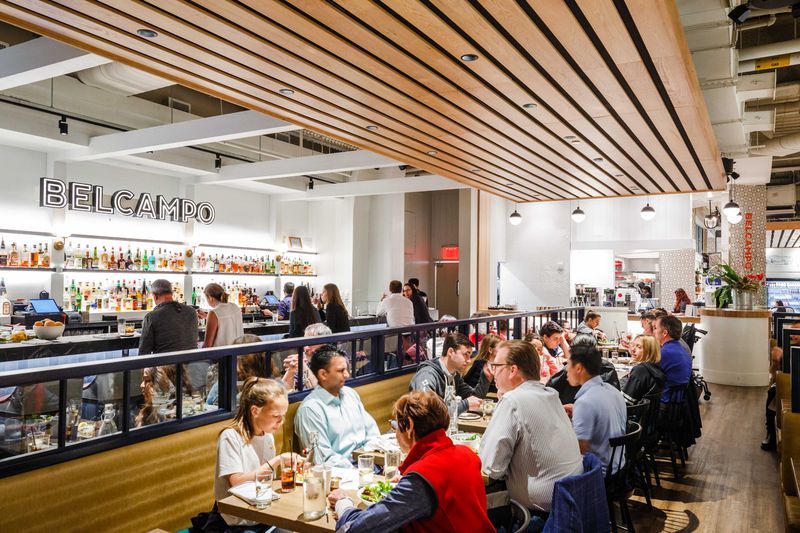 Bonus tip: The right order here is an order of duck poutine and beef tartare (or carpaccio). For a classic fast food burger, the better option is Shack Shack around the corner.