At Costas Spiliadis’s Greek seafood restaurant at Hudson Yards, the one constant is that you’ll feel cheated — whether the food is grand or average

Share All sharing options for: Estiatorio Milos Is One of the Last Big Restaurant Scams in New York

Score:
Review : Rated 0.0 out of 4 stars
Address: 20 Hudson Yards, fifth and sixth floors, New York, NY 10001
Website: Website
Part of Where to Eat (but Mostly What to Avoid) at Hudson Yards

At the sprawling Hudson Yards location of Milos, the Costas Spiliadis seafood chain that treats diners as if they were marks at a pickpockets convention, no event is more pivotal to the nightly con than The Tour.

A server approaches your table and invites you to browse a selection of seafood. The options look immaculate. Small mountains of ice hold a seafaring selection not often seen in New York: emperor fish, with anime eyes and a millenial-pink sheen. Carabinero shrimp, as unnaturally red as a Coca-Cola can. Rascasse, with spiny protrusions that look plagiarized from the latest Jurassic Park film. This is where you choose your dinner — a process that occurs, almost universally, after you’ve plowed through half a pomegranate daiquiri. It’s the maritime equivalent of shopping for engagement rings with a glass of bubbly.

You almost don’t notice when a waiter recommends you kick off the meal with langoustines that runs $102 per pound. Besides, there’s no way he’ll give you anything close to a pound. Right?

Make no mistake: You have been primed for a shakedown, Cartier-style.

One of the holy grails of modern fine dining has been finding a way to de-emphasize the transactional experience of a meal. The culinary arts have always been uniquely handicapped in this sense. Opera would have a different feel if a soprano kicked off the evening by telling spectators “this aria is going to cost you a ton,” and then sent out a check to everyone at the end of the night.

Some of America’s most expensive restaurants have solved this problem via a ticketing system, having guests pay for meals in advance. Milos takes a different tack, obscuring as many prices as possible throughout the course of an evening.

You’ve been primed for a shakedown, Cartier-style.

The saga starts back at that tour. The captains sing nuanced praises for the barbounia, fagi, and lavraki. They know which ones are oily, which ones are buttery, and that there’s “not much cheek meat in the turbot.” They know every detail — except for the prices, a subject they avoid so diligently that one wonders whether these veritable ichthyologists skipped a very specific day of school.

By-the-pound prices are posted above most fish. That price, though, means you’re looking not at the actual cost but the raw data for an incomplete math equation. Either way, you’re paying more attention to the waiter’s musings on the Milos yacht (which you can apparently rent in the Aegean Sea), or how a two-and-a-half-pound lobster would be nice for a solo diner. The lobsters bear no price tags, which is dangerous for a main that costs more than round-trip airfare to Chicago.

You return to your linen-clad table and ask for two langoustines and a turbot. The server says the whole fish is three pounds. You know the price is $56 per pound — you were smart enough to take notes — so you figure you’ll be out $160. And yet, when the bill comes, the price is $197. That can’t be right, you declare, not for this strikingly bland product, heavily undersalted, with just a few paltry capers and no olive oil. Then you take a closer look at the check and notice the fish is half a pound heavier than the waiter told you it would be. Whoops!

Those langoustines, in turn, boast a sweet, gas-grilled aroma, though they lack the intense, oceanic aroma these crustaceans have elsewhere. You didn’t inquire about the price, because you got tired of asking “How much do these actually cost?” You figured a few prawns would cost less than caviar service. You figured wrong. They’re a cool $87 for an appetizer’s worth of meat. This is when you start to spew expletives.

The well-heeled might find this system unobtrusive, and perhaps there’s something honest about assigning a very specific price to an individual fish based on its weight. There’s also a certain elegance in convincing guests to part with a few extra dollars and make them feel like it was worth it.

But everyday gourmands might find something disingenuous about implementing that system in such a way that dinner ends up costing you $100 more than you budgeted for. Constant incongruities on a bill at Milos feel more like the work of an unscrupulous bookie than an honest act of hospitality.

The food, too, does not always deliver on unexpectedly ballooned costs. The carabinero prawns — a receptionist told me I’d pay $30 apiece; the bill charged $40 — tasted like shellfish to the power of 10, but a lobster pasta in which diced tail meat gets tossed into a sherry cream sauce did little better than neighborhood restaurants that charge almost four times less. With two medium-sized claws, the middling dish arrived on the bill at $189.

Instead, order the soft-shell crab. At $27 apiece, they’re a heck of a price, but the cooks do them right, pan-frying them in a way that seems to preserve their briny juices better than elsewhere. The best way to hit Milos, though, is to sit at the bar, order a pound of the rarely-seen-in-NYC fried red mullets, and tear away at the small fish with a buddy. The impossibly sweet flesh, when it’s not overcooked, recalls the fragrant, mineral aromas of the Mediterranean.

Spiliadis has been at this for a while now. He opened his first Milos in Montreal in 1979, followed that up with a Midtown Manhattan location in 1997, and replicated those efforts in London, Vegas, and Seattle. If nothing else, his New York stalwart deserves credit for occupying a very specific role in the fine dining community; the city’s most expensive restaurants have long focused on manipulating, refining, and saucing food, while Milos has always been the ultimate pure product emporium, minimally adorning fish and serving them grilled, pan-fried, or salt-baked. If done right, like it is at Bartolotta in Las Vegas, this style of dining can be quite wonderful.

At Hudson Yards, it feels more like an ode to Long Island dining. That is to say: You can pay a lot of money for a lot of forgettable food while hanging with a bunch of middle-aged guys in leather jackets jockeying for the bartender’s attention.

You can pay a lot of money for forgettable food

This isn’t exactly Danny Meyer generosity or ambience, either. Hosts don’t say goodbye. The guy who pours you a drink won’t transfer your tab. And the ambience evokes a cheap cruise with obstructed views; the lighting is so poor that the panoramic windows do a better job at reflecting back the dining room than providing a view of the Hudson.

I suppose I could have devoted an equally long essay to service issues — to the fact that one can eat the bulk of that lobster without a wine or cocktail, because you couldn’t flag down a waiter. To the fact that you can go 60 minutes after arriving without food because the restaurant is overbooked and the waiters ignore you after you’re seated. To the fact that you might get a table overlooking the mall.

Thing is, we’re all familiar with these stories; stereotypically bad restaurants are a dime a dozen in this city. I highlight the opaque pricing because an unsuspecting diner could really get taken here. And that is what makes Milos a uniquely bad restaurant. 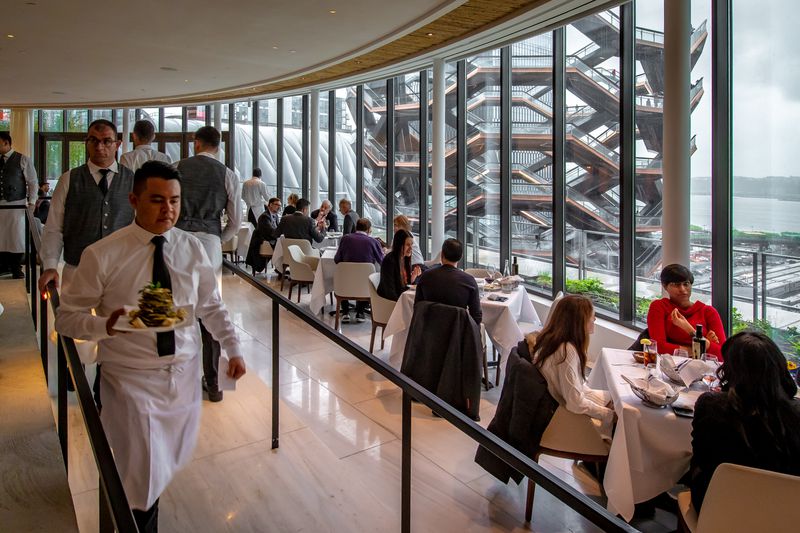 Cost: Anywhere from $150-$250 per person for a full 3-4 course meal. For a more affordable experience, consider the $32 business lunch, or the $57 family weekend lunch. Remember that most fish and shellfish are listed as MP.

Bonus tip: Waiters sometimes offer to weigh a fish, but will rarely tell you the resulting price. To stay under budget, ask what the total “weighed” portion of your order will cost.