An NYC Korean Food Trailblazer Continues to Stun at Haenyeo

Jenny Kwak is a chef at the top of her game, moving deftly between traditional Korean and actually exciting fusion fare in Park Slope

Share All sharing options for: An NYC Korean Food Trailblazer Continues to Stun at Haenyeo

Review and information for Haenyeo

Amid New York’s ever-globalizing culinary scene, a culture of cross-pollination continues to thrive. The city’s finest barbecue shack sells not just Texas brisket but stellar jerk pork. An ambitious Indian spot in Gramercy sends out pitch-perfect tandoori chicken — and guacamole to boot. An Asian rotisserie in Midtown stuffs its breakfast pitas with, of all things, cream cheese and lox. And now at Haenyeo, a knockout of a Korean hangout in Park Slope, the kitchen whips up bouillabaisse as masterful as that of any Gallic temple.

Chef-owner Jenny Kwak infuses gochuchang chile powder into a classic French soup of fish fumet, fennel, tomatoes, and Pernod. The rust-colored mixture zings your sinuses with a pungent tang of the sea. A filet of cod acts as a steady conduit for the powerful broth, as does a scattering of — not something you’d find in Marseille — glutinous rice cakes. Mussels add a touch of funk, as do head-on shrimp and all their oozy insides. And then there’s the prize, an orb of uni floating about like an egg yolk in ramen. The warmth of the stew doubles the urchin’s natural sugars and triples its musk.

At this point you might search for the traditional bouillabaisse accompaniment of croutons with rouille to add a bit of garlicky cream and crunch to the stew. Except there’s none of that here. Kwak instead presents a baguette slathered with seaweed butter. Let it soak in the broth, then appreciate how the sweet nori enriches the mixture.

If that’s still too European, Kwak offers more traditional dishes too, from bulgogi to raw fish bibimbap bowls — alongside with Mexican-leaning fundidos and Louisiana-style shellfish. Haenyeo might take its name from the women who free-dive for seafood off of Korea’s Jeju Island, but its approach to cuisine is often decidedly and unabashedly internationalist.

Park Slope’s collection of Korean restaurants is still small, which is fitting. That country’s cuisine didn’t have a ton of East Village representation there before Kwak and her mother, Myung Ja Kwak, came along nearly 30 years ago. The duo have functioned among a group of trailblazers for the city’s Korean scene, spreading the gospel of their ancestral foods outside the confines of 32nd Street. The mother-daughter team opened up Dok Suni’s on First Avenue in the early 1990s, drawing in hip crowds with stretchy japchae noodles.

Writers praised their efforts, though they sometimes used language that should’ve come across as troublesome then, as it is now. New York Magazine’s Fran Schumer began her Suni’s review with this slight: “You’d rather have spaghetti than kimchi any day, but there are times when cold pickled cabbage tastes that good.”

New York Times critic William Grimes lauded Kwak’s use of tasting menus to “demystify” Korean food at Do Hwa in the West Village. “For years the city’s Korean restaurants made no concessions to newcomers, who faced a struggle figuring out what the dishes were, how to order them and how to eat them,” he wrote in 2000.

Food will always adapt, but pointing out a particular cuisine’s so-called lack of concessions or instructions is a dicier affair. That said, the Korean restaurant community has evolved over the decades — as have the journalists covering it. It’s been ages since a reviewer has used the word “forbidding” in association with any of these fine venues, or (unnecessarily) mentioned that the waiters “speak English well.”

Korean fried chicken is about as ubiquitous as any other style. A certain galbi-slinging barbecue spot in Flatiron is harder to get into than any local steakhouse. A multibillion-dollar real estate complex is selling ’grammable rice cakes shaped like pinwheels. And late last year marked the debut of Haenyeo, whose kitchen exhibits a stunning fluency in alternating between more traditional and more modern, fusion-y preparations.

There’s something profoundly warming about walking past a bustling Al Di La, the Italian pride of Park Slope, and noticing that Haenyeo across the street is no less packed. Miles Davis pipes through the sound system as families eat fried scallops with corn tartare — an “is-it-summer-yet” melange of oceanic and terrestrial sugars — and scallion pancakes; the slices of spicy onion are held together with so little batter they’re effectively modernist tempura sculptures.

The corner space, with handsome brown floor planks, French-style bar stools, and ample natural light, screams neighborhood cafe, and that’s partly the plan. Haenyeo will open for lunch and brunch this summer, serving up coffee and eggs with “jambalaya rice.” For now, it’s dinner only, with a no-reservations policy for most party sizes. The wait on Saturdays can surpass 90 minutes.

Anyone who tries the oysters will understand the pulsating crowds. Kwak grills them over hardwood briquettes, a hat tip to the New Orleans heritage of her husband, Terrence Segura, with whom she shares ownership. She’s not the first person to do this in New York, but she might be the most skilled. The Wellfleet bivalves display an aggressive plumpness; they pop with a gentle press of the tongue, gushing with hot seaweed butter.

Equally stunning is the rustic-internationalist take on fundido, typically a glorious gut bomb of melted cheese. Here, that ingredient constitutes just the epidermal layer of a deeper, bubbling casserole. Beneath the scorched cheese, an aggressively milky Oaxacan variety, lies a pool of chile sauce and mounds of tteokbokki, oblong Korean rice cakes. Pull them up with a pair of chopsticks, collecting the other ingredients along the way — perhaps some jalapeños, or crumbled chorizo peeking just beneath the surface. The combination of flavors and textures — chewy rice cakes, hot peppers, tart sauce, spiced sausage, and stretchy, melty cheese — feels like less of a true fundido and more of a Korean-Mexican riff on baked ziti.

Then, a moment later, Kwak switches gear to modern-refined fare. She serves ordinary grilled mackerel in a very distinct way, by pairing it with square sheets of nori. The mackerel is soft and neutral, boasting gently smoky overtones. It’s borderline boring until you wrap it in seaweed, which imparts the fish with a hint of brine and a crisp, snappy texture. You dunk the hand roll, a striking contrast of white and green, in crimson gochujang paste, lighting up the palate with salt and sweet chiles.

The menu has a few minor misses, from run-of-the-mill beef kimchi gyoza — ordinary fried dumplings — to a bland mound of chile-braised tofu. Better are the puffy fried chicken bites laced with jalapenos, as well as the Korean seafood stew, a smaller, more classic answer to the fancier bouillabaisse. The soup, chock full of silky soybean curd and firm shrimp, is milder in flavor than the spendier French version, sporting just a touch of shellfish concentrate. And then there is the classic soy-and-sesame-marinated ribeye bulgogi, cut paper-thin and piled high on a platter for wrapping in crisp lettuce and shiso leaves.

Louisiana-style beignets are the appropriate way to end a meal here. The dough itself is relatively unsweetened, giving the confections the taste of a classic street-fair zeppole. So much powdered sugar is applied that you will inhale some as you eat.

“Not Korean” is the disclaimer that Kwak appends to her Instagrams of that dessert. “For me, staying true or preserving Korean flavors is the main goal,” the chef writes in an email. But she adds that “there are so many influences around me, mostly from traveling but even from living in NYC,” that she allows herself more room to experiment than she did earlier in career. May she continue to do so.

Our review of Haenyeo 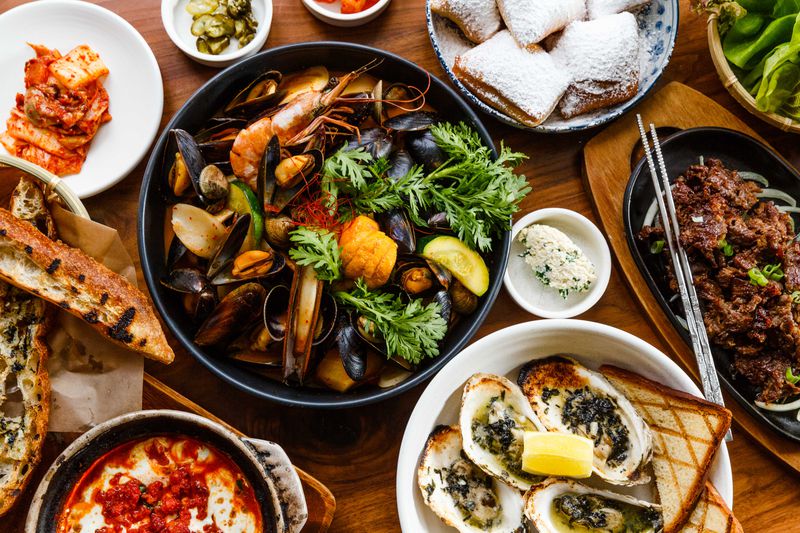 Bonus tip: Reservations only available for six or more; the best way to avoid the wait is to dine earlier in the week, in the off hours, or best of all, at the bar, where things are first come, first served.