Flickers of That Old Vongerichten Brilliance Shine Through at Wayan

Share All sharing options for: Flickers of That Old Vongerichten Brilliance Shine Through at Wayan

Review and information for Wayan

At the chef’s counter at Wayan, Cédric and Ochi Vongerichten’s stunner of an Indonesian restaurant, a waiter pours a glass of Champagne as cooks tend to sizzling satays. Skewered meats are normally a performative affair, with flames shooting skyward and fat incinerating into a fragrant perfume. But from the vantage point of this marble bar, flanked by rough-hewn wood, diners witness a calmer spectacle. The chefs simply place pierced chicken thighs on a hot flattop and monitor the cooking with care. This is unexpected.

Indonesia, a multi-ethnic archipelago of 6,000 inhabited islands and the world’s most populous Muslim-majority country, doesn’t have a unitary cuisine. Its myriad cultures and dishes express influences ranging from indigenous to Dutch to Middle Eastern to Indian to Polynesian to Chinese. But broadly speaking, hawkers like to grill over wood or coal, a technique that imbues their meats with succulent smoke and char. It’s a style of cooking New York restaurants are increasingly obsessing over, from the Standard’s elegant binchotan to the shashlik trough at Nargis.

And yet at Wayan in Nolita, due to fire code issues, the team executes this Southeast Asian staple via a European-style griddle. The skewers do not suffer from the adaptation.

If chicken satays sound boring, consider this: The thigh meat exhibits the silkiness of tofu, while a beige peanut sauce flaunts the richness of cream. It’s like blanquette de veau on a stick, albeit energized with coconut and red curry. Pork skewers, showing off a bit more chew, arrive in a chile-soy glaze that’s as inky as mole negro, though markedly sweeter. And sticks of Florida shrimp, exuding the candied scent of makrut lime, collapse with the snap of a summertime watermelon.

Ochi, a Jakarta native involved in everything from menu development to tableware, and her chef-husband Cédric, have given New York a thrilling addition to its contemporary Southeast Asian scene. Like Uncle Boons, Kopitiam, Jeepney, and elsewhere, Wayan shows off compelling strains of modernity rooted in tradition.

Alongside a cilantro-scented filet of steamed bass, the delicate flesh just firmer than custard, a waiter places a single bakwan jagung, a classic corn fritter plated for the social media era. Cédric garnishes the creation with scallions and sits it on a tiny pedestal; the flavor is pure fried chicken skin while the visuals are very El Bulli.

A long time ago, in a galaxy far, far, away, this is the type of restaurant one might have expected from Cédric’s father, Jean-Georges Vongerichten, the Franco-American chef who shook up New York gastronomy in the late ’90s and early aughts. From his eponymous Central Park flagship to his clubby Spice Market in the Meatpacking District, he drew upon his days cooking in Thailand, Singapore, and Hong Kong to fuse Asian sensibilities with Continental fare. He flourished dishes with floral herbs like lemongrass while deploying levels of heat, salt, sugar, and acid uncharacteristic for sleepier Midtown venues. The flavors were still in balance; it’s just that they were cranked up to high volume.

That style of cooking, which worked its way through the culinary mainstream over the years, is precisely what one encounters at Wayan. Cédric, a Bangkok-born chef who also runs Perry St, places ultra-ripe mango slices on radicchio and drenches them all in passionfruit sauce. You roll up the leaves and then eat them with your hands, the zing and fragrance of the fruits priming the tongue for richer courses to come.

Particularly breathtaking is sop buntut, Javanese oxtail soup. The broth is rich with beef and cinnamon yet lightened to springtime levels through tactical doses of lemongrass and cilantro. On the side is a small ramekin of pureed green chile and cilantro; patrons mix it in to amp up the levels of salt and heat. Fancy French chefs, of course, are never content to serve braised meats straight out of the pot; they insist on crisping up the edges for a bit of texture. And that’s precisely what Cédric does, imparting the oxtail with a firm Maillard char.

Really, if there were any fears about whether Wayan would be good, they weren’t questions of benign adaptation — be it adjusting for local ingredients or sensibilities — but rather of stifling uniformization, the virulent straitjacket of the New York restaurant world. The prevailing Jean-Georges empire, with few exceptions, has been less about taking an imaginative (or traditional) approach to Asian ingredients, and more about throwing together bland East-meets-West menus in a package that can be copied across the globe.

Such fears are not entirely unwarranted. Vong Kitchen in Jakarta, whose dishes are “curated by” Cédric and Jean-Georges, speaks to this narrative, as do certain aspects of the Wayan menu. There’s the sesame-laced amberjack sashimi here in Nolita, which wouldn’t feel out of place at any Nobu or Robuchon in Moscow or Tokyo. There’s the obligatory safe steak, $60 worth of overcooked wagyu that mimics the texture of a well-worn shoe.

And then there’s Wayan’s crabcake, garnished with a vertical build of cucumbers and sprouts as if it were one of Alfred Portale’s “tall” dishes from the 1980s. With so many brilliant Southeast Asian crab dishes (and fish cakes) to choose from, one wonders why Wayan opts for a preparation indistinguishable from the American country club variety. Make no mistake, the kitchen balances the flavors with aplomb, jazzing up the neutral crabmeat with a fiery, fish sauce-laced vinaigrette. But still, it’s disappointing that Cédric, instead of trying to introduce New Yorkers to something decidedly rare, falls back on something so ubiquitous.

The name Wayan, incidentally, is Balinese; it means first-born. The Tao-ish design (Rockwell Group) is a hat tip to that island as well, with reclaimed wood and hanging vines evoking its vernacular architecture. The decorative spices strewn throughout the restaurant, from cinnamon to star anise, by contrast, feel like an ode to Pottery Barn.

More inspirational is the nasi goreng, a must-order. Indonesian meals are often built around rice, and Wayan’s version of the staple is deeply flavorful with the aroma of garlic. Pair it with sauteed whole prawns, slathered in a sweet sambal the color of Twizzlers, or even better, with yellow curry; crispy chicken thighs and wings sit in a pool of turmeric- and lemongrass-infused coconut milk.

Or for an equally complex starch, the kitchen slicks Chinese-style lamian noodles with kecap manis, a molasses-like soy sauce, as well with a throat-tickling blend of chiles and black peppercorns. For good measure, they also throw in a few chunks of lobster so powerfully flavored one wonders if Cédric found a way to dry-age the crustacean.

The dessert of choice is pandan custard, as much a visual triumph as a gustatory one. Cédric pours a layer of passionfruit juice, along with its seeds, along the top layer of the confection. You dip in your spoon as if you were digging into a halved tropical fruit, but what comes out is not yellow flesh but rather oozy, vanilla-laced pudding. The juice acts as an assertive, acidic counterpoint to the indulgent dairy. Jean-Georges also does a bit of trompe l’oeil over on Central Park West, where caviar sits atop what appears to be a lemon — it’s really just citron gelee. Like father, like son, I suppose, but I’ll cast my vote for the cheaper $12 faux fruit!

Our review of Wayan 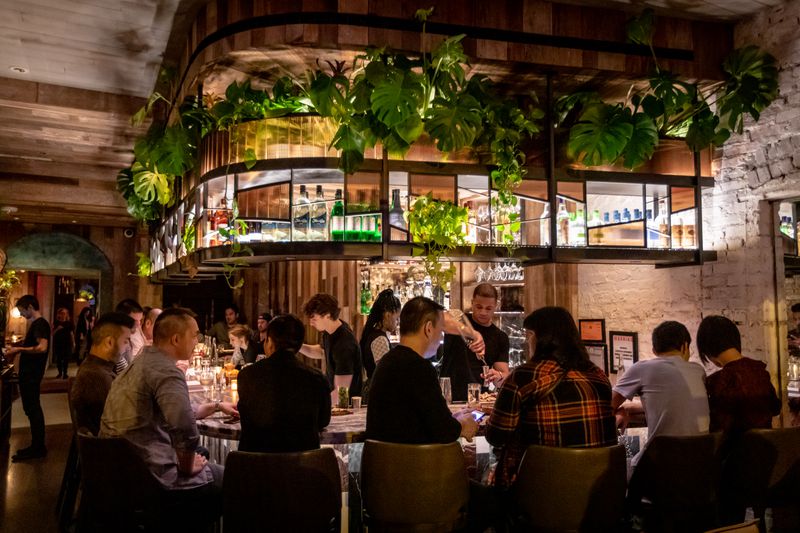 Bonus tip: Prime-time reservations can be snapped up a week or so out on Resy, though there is ample seating for walk-ins. Also, for more casual (and affordable) Indonesian fare, consider Kopi Kopi in Greenwich Village or Bali Kitchen in the East Village.