Desi tacos and cumin-laced guacamole are executed well at the clubby restaurant, but service issues hold back the former Indian Accent chef

Share All sharing options for: GupShup Turns a Bafflingly Trendy Menu Into a Whimsical Delight, Rooted in Indian Flavors

Review and information for GupShup

Here’s the scene on a recent night at GupShup, a hip new Indian restaurant that has attracted the likes of actor Anupam Kher and comedian Jimmy Fallon. Bollywood movies show at the upstairs bar while thumping club music — not so much the dancing kind as the anonymous variety familiar from a duty-free cosmetics store — fills the dining room. A large group of Elite Yelpers, distinguished by their very cool nametags, are mingling, swirling red wine, and hovering too close to our table. My party has been waiting for the first course to show up, but when a server finally swings by, she brings something a bit less expected: a beverage bill from the downstairs bar.

“It would be great if you could settle up,” she says. How welcoming.

Ten minutes later, a waiter ferries over a tray filled with guacamole, tacos, ramen, and other fusiony fare that wouldn’t feel out of place at a clubstaurant like Tao or Vandal. That reality extends to the cocktail list. Anyone who orders the house mule, a watery mix of Grey Goose, turmeric, ginger, and lavender, will have to ask for an “Ayurvedic Jackass.”

It’s all enough to make one wonder: Is it not odd that chef Gurpreet Singh, whose eye for nuance made Indian Accent one of the city’s more exhilarating fine dining experiences, is channeling the ubiquities (and ignominies) of the modern food world? It is odd — until you start eating.

Guacamole, at first glance, is indistinguishable from other excellent versions elsewhere. Cooks mash the avocados to order with green chiles and cilantro — nothing out of the ordinary.

But a few subtle tweaks make the dish stand out. Cooks lace the fruit with cumin; its sweet musk wafts along the palate. And instead of fried tortillas, GupShup uses khakhra crisps: thin, fried, fenugreek-laced flatbread from Gujarat. And while the supply of chips is only sufficient for about 60 seconds’ worth of guac eating (lolz), an order of garlic naan finishes the job with efficiency. It’s a pricey ’mole at $18, or $24 with bread, but the clear flavors and soft, meringue-like textures are flawless.

For “tacos,” Singh wraps a mash of jackfruit inside chilla pancakes. The soft shell, made from lentil flour, has the springy give of injera, while the fruit, sporting the texture of firm tofu, yields to a gentle chew. It conveys meatiness without meat, singes the tongue with chiles, and finishes with the perfume of lime. You continue eating, and you slowly realize why folks are flocking to this packed patch of Gramercy.

The dining room and the jackfruit tacos

There are at least two branches to the ongoing evolution of Indian fare in New York. One of them, which includes venues like Chintan Pandya’s Adda and Hemant Mathur’s Sahib, espouses forward-looking classics and less-commonly found regional dishes — from Kashmiri methi maaz (lamb in fenugreek sauce) to bheja fry (eggy goat-brain stews). These venues function to remind New Yorkers that South Asian food isn’t a static monolith but an ever-changing collection of distinct (and overlapping) cuisines.

Singh’s restaurant does not belong to that group, not with its lamb seekh burgers, masala fries, and cod sliders. Its gastronomic leanings align with a different gang, a league of South Asian spots that add a layer of internationalism and creativity to more traditional dishes. One thinks of the yuzu-laced chile crabs of Rahi in Greenwich Village or the foie gras duck haleem of Baar Baar, a frenetic Bowery space with a Buddakan-style vibe.

GupShup, by Indian-born restaurateur Jimmy Rizvi (Korali Estiatorio), is a more sedate affair. It finds its energy in art — from a two-story wall of 3,000 tiffins to artist Karishma Naran’s mural of a modern Indian woman — and in a style of culinary tinkering that’s more trend-centric than its peers.

That means Saturday morning avocado toast. The line between innovative globalism and yet another a basic brunch staple can be a fine one, and in this particular instance, it’s not so clear whether Singh adds anything to the conversation. The chef smears a bland swath of the fruit over cold, limp sourdough, adds some diced mango and chopped onion, and charges $18. It would not pass muster at a free hotel breakfast buffet.

GupShup’s ramen is another misstep. That’s not to slight the ideas underpinning it; adding noodles to a Southern tomato curry is intuitive enough. It’s the execution that’s flawed. The ramen itself was overcooked to the point of mushiness, and a supplemental lobster tail had the texture of jerky.

Those mistakes aside, Singh generally manages to execute his more experimental dishes with aplomb. There’s that guac and those jackfruit tacos. Or take the puchkas, crispy puffs filled with smoked salmon and curd rice mousse. Ad absurdum, the city’s dining scene would be a very weird place if every new restaurant sold yet another riff on cream cheese and lox on a bagel.

But just as Momofuku Bang Bar manages to improve upon the classic combo with warm flatbread, GupShup’s own evocation, blending Indian sensibilities with Jewish-appetizing inclinations, is no less relevant. The puchkas crumble with just a flick of the tongue. The tart mousse vibrates on the tongue with the power of Alka Seltzer, acting as a stunning antidote to the oily fish.

Or consider the chur-chur naan, a soft yet flaky bread that’s a popular street snack in Delhi. Vendors typically finish it off with butter. Singh adds foie gras, an ingredient that historically functions as an extreme act of indulgence. But somehow the engorged duck liver is a seamless addition to the dish, dialing up the naan’s richness and sweetness.

Sliders, the mini-sandwich bane of the aughts, make a winning return here as softly baked cod atop pao rolls. If the salinity of the fish is too much at first, make sure to chomp the bread, whose sugars moderate the aggressive seasoning.

Singh, in short, is taking advantage of New York’s thriving globalism to riff on his ancestral cuisine. And if any of this seems a touch off, kindly remember that GupShup is simply deploying the same whimsical eclecticism as its non-Indian peers, from the American restaurant serving Southeast Asian shrimp toast to the Spanish-leaning seafood spot selling Sichuan-style pig ear to virtually any sports bar anywhere in the city hawking tacos.

Singh could surely thrive on his creativity alone, but he also rocks the classics with finesse. The kitchen sends out chicken tikka with an interior so creamy it could pass itself off as tofu. Tiger prawns, in turn, exhibit delicately cooked flesh and an oceanic aroma that recalls more-expensive langoustines.

Singh used to make a mean vegetarian keema back at Indian accent; it was a spicy, saucy, umami-rich stew of soy that effectively made it one of the city’s top cups of chili. Here at GupShup, he keeps things meatier, setting a coarse grind of lamb in two halves of an onion. It uses the power of cinnamon to amp up the grassy sweetness of the ruminant.

Beef stir-fry, the legendary streetside dish of Kerala, doesn’t show up at a lot of New York restaurants. Maybe that will change after more folks try GupShup’s knockout version, with the tender skirt steak bursting with notes of sweet red pepper, curry leaf, onion, and sambal chile. Nizams haleem, a staple of Ramadan iftar dinners in Hyderabad, makes a unexpected appearance as well. The humble dish is everything it should be: lamb, lentils, and wheat cooked down to the texture of a soft paste, all the better for snatching up with naan or rice.

Too bad an order of rice was cold by the time the haleem arrived. It came out, for no particular reason, with an earlier course that included ramen, tacos, and guacamole. Maybe GupShup should ask itself whether it really pairs with any of those dishes?

Weird things tend to happen here. The host might send you to the upstairs bar, whose bartender will then inform you that his section is closed. When someone orders chai ($15 per kettle), a server might respond that they’re not serving it anymore because “our pastry chef has left.” The complexities of the saffron-laced preparation notwithstanding, a restaurant is in trouble if just a single employee is capable of making its signature tea.

Pre-made desserts, however, are still available if the pastry chef is absent, though it’s not clear whether that’s a good thing. Fig and banana sticky pudding is a study in bland flavors and cold, mealy textures. Cinnamon panna cotta, on two occasions, tastes like what would happen if a kitchen worker thought that the traditional Italian dessert was supposed to flaunt the texture and sweetness of grocery-store cake frosting.

For a Gramercy Park restaurant with operators as experienced as this, one could reasonably expect more polish; the service missteps tend to distract from the food. And that’s too bad, because Singh’s cuisine represents a thrilling chapter in modern New York Indian cuisine.

Our review of GupShup 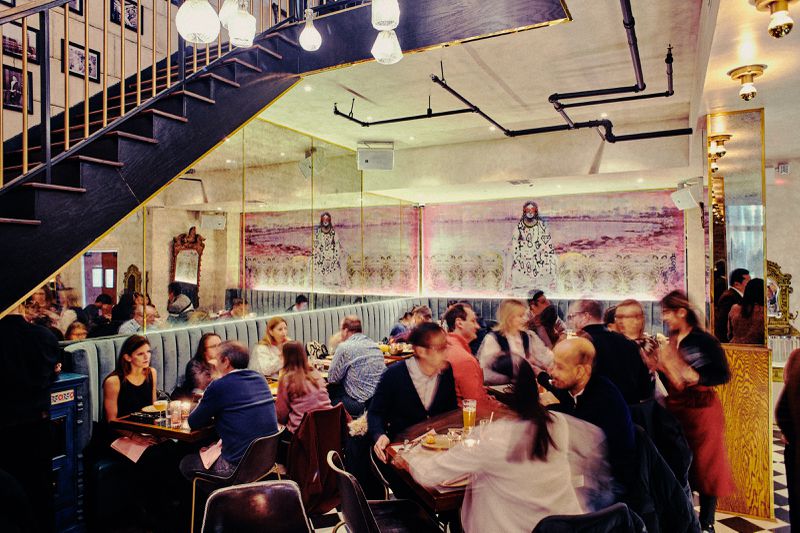 Bonus tip: If you don’t ask a server to course things out, literally all of your food will show up at once; this is even true for solo diners ordering multiple plates.