Review and information for Momofuku Noodle Bar at TWC

The most exciting meal of Julia Child’s life, by her own account, was a 1948 lunch of Dover sole meuniere. Served at a small auberge in Normandy, the fish came in a “sputtering” butter sauce, while the delicate flesh exhibited a “light but distinct taste of the ocean,” she wrote. Nearly 75 years later, sole remains a staple of European and stateside fine dining, where it’s prepared in a way that suggests not much has changed since the postwar era. Wait captains normally debone the fish tableside, pair it with a restrained sauce, and sometimes toss in a few capers.

The restaurants selling these skinless fillets — inevitably starchy institutions with Continental overtones — will charge anywhere from $62 to $100. It is a very pretty dish. Usually.

One wonders what Child would’ve thought of the version at David Chang’s slyly thrilling Momofuku Noodle Bar in Midtown. Alongside the porky ramen, chickpea soft serve, and frozen banana daiquiris, there is a Dover sole that has evolved — or devolved — a touch more than others. It is neither delicate nor pretty.

No tableside service here. Patrons watch as cooks, under the aegis of chef Tony Kim, unceremoniously griddle the sole, pressing a weight against it for a hard sear. Waiters present the fish skin on and head on; this is unusual for a flatfish, a group of maritime creatures that look like they were run over by a tractor trailer. The flesh, firmer and springier than a fluke’s but just as neutral, acts a conduit for fermented red and green chiles, served in ramekins, while the coral-hued skin recalls the tannic complexity of matcha or nori. It doesn’t taste as much of the ocean as it does of seaweed, acid, and fire. It is a regal fish reimagined as bar food.

The cost is just $43 here at the Time Warner Center, home to the city’s densest collection of offensively priced restaurants. It’s as if Chang is saying: “We can cook with the same obvious luxuries as our neighbors, do more with them, and charge less.” Not bad for a chain restaurant on the third floor of a shopping mall.

Chang, who rose to celebrity status as an expletive-spewing chef bent on dressing down fine dining and subverting culinary traditions, is not an empire builder in the typical sense. He doesn’t Xerox fine dining temples like the late Joel Robuchon or overpriced steakhouses a la Wolfgang Puck. Almost all of his sit-down concepts are genuinely unique, from Seiobo, a Caribbean-Australian tasting counter in Sydney, to Nishi, an Asian-Italian pasta place in New York, to Majordomo, an haute-rustic hotspot in Los Angeles.

But Noodle Bar — along with his Fuku fast-food outlets — appears slated for interplanetary replication. Chang runs three of them, in the East Village, Time Warner, and Toronto, or arguably four, as the Las Vegas Momofuku borrows heavily from the chain’s repertoire of ramen, pork buns, and fried chicken.

Given how much culinary risk Chang takes elsewhere — not to mention that fact that his venture capital backers will likely want a return on their investment — it would be understandable if Noodle Bar turned out to be the chef’s carbon-copy money maker.

And yet that appears not to be the case, at least not here.

This Midtown Momofuku has forged an identity of its own, embracing the sterile mall as much as its international eclecticism and somehow maintaining its soul throughout. Across from a Bose Store, a J.Crew, and a bland brasserie — a commercial cul-de-sac that’s barren after 8 p.m. — Noodle Bar teems with life. The long bar, cramped booths, and open kitchen evoke a packed 24-hour diner. Patrons dunk squishy Hot Pocket-shaped buns into pools of jus; it is a French dip for the future, with the muscular beef concentrate magnifying the oomph of the soft brisket stuffing.

An electric sign, equipped with flapping panels like the Grand Central train departures board, advertises nightly specials. If the buttery Gulf shrimp over rice appear, order them; the Viet-Cajun dish, a hat tip to the Houston upbringing of sous chef Gary Ly, bursts with Old Bay, cayenne, shallots, and cilantro.

Beef katsu, in turn, pays homage to nearby Japanese izakayas. The kitchen coats a rib in panko and deep-fries it, imparting the tender, musky meat with a distinct crunch. Just when things get too rich, an agrodolce steak sauce slices through all the bovine fats with the aplomb of A-1. And next door at lunchtime, cooks shave gochujang-laced pork into soft rounds of bang bread, a hat tip to Midtown’s streetside pita vendors.

These creations, while not Chang’s per se, are still classically Changian, which is to say globally curious yet laced with strong American and Asian leanings.

A few of the specials, however, seem designed as affordable odes to the luxe mall itself, a bastion of oligarch-ian indulgences. Thomas Keller’s Per Se charges $125 for its black truffle tagliatelle. Noodle Bar, by contrast, is planning to offer a spectacularly earthy tartufo nero ramen, likely for about $49.

Oodles of Time Warner spots levy $95-plus for caviar. Noodle Bar commands a more reasonable $28 for fried chicken buns, where the crispy meat gets a saline kick from a generous shower of smoked trout roe — a break from Noodle Bar’s $500 version of this dish that has heaps of black caviar. No, it’s not the same thing, but since many can only afford one of the above, the adaptation is an important one.

And while Masa upstairs is famous for its $68 white truffle ice cream (that comes on top of a $595 menu), Noodle Bar charges just $29 for something quite similar. Kim shaves a flurry of the fragrant tubers over hozon soft serve, a soy-free analogue to miso. The flavor is pungent at first, then salty, then sweet. It is, like so many other dishes here, an axiomatic argument against the exclusionary pricing that pervades so much of this shopping center.

Folks might also try the ramen here, even if it’s not always on par with that of competing venues in nearby Hell’s Kitchen. A longtime quirk of Noodle Bar is that the composed plates have often outperformed the titular speciality.

And just as Dover sole is not replicated in its usual form here, Momofuku’s cadre of chefs shy away from classic ramen nomenclature and flavor profiles, mixing shio with shoyu and throwing in, as Kim tells me, some Korean sensibilities with a little extra chile.

The majestic smoked pork ramen — identical to the East Village original — tastes like what would happen if a cook accidentally left a bowl of spicy swine broth next to a barbecue pit. It doesn’t have the same mouthfeel as a richer paitan, but the sensation is akin to slurping up al dente noodles slicked with liquid bacon.

Garlic chicken ramen, in turn, conveys salty warmth, with cubes of rotisserie thigh packing a lot more flavor than the neutral, egg-enriched broth. It’s fine, which is more than what one could say about thin beef soup (a skip). Until the black truffle ramen arrives, the bacon-y smoked pork ramen is the move, as is a pile of chile-laced cold noodles.

For dessert, diners can order that white truffle soft serve, or go for the frozen dairy alone. The kitchen also runs a special of pork fat-griddled bang flatbread, sprinkling the pita-like rounds with a coarse cinnamon-sugar blend. The end product, which looks like a floppy frisbee, recalls a smokier version of those doughy Auntie Anne’s dessert pretzels that humans rely on to keep blood insulin levels up during marathon mall sessions.

Therein lies the brilliance of Noodle Bar. Even though it manages to be a unique Chang-brand restaurant — and a venue that self-knowingly chuckles at the surrounding haughtiness — it still has fun riffing on the fact that it’s just a place to eat while shopping.

Our review of Momofuku Noodle Bar at TWC 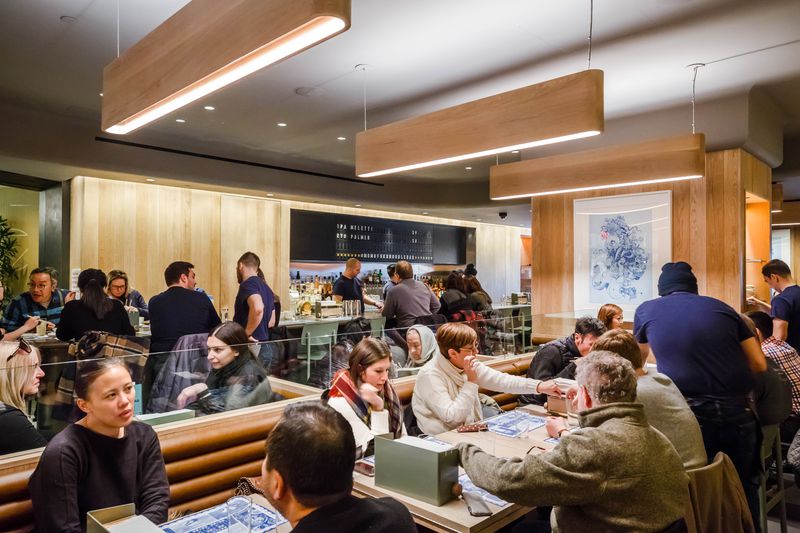 Bonus tip: Don’t sleep on the large-format oxtail with rice cakes and buttered rice; the rich, meaty, gravy-slicked stew is a solid way for a party of two or three to fill up without breaking the bank.