At Atlas Kitchen, a Risk-Taking Chef Takes Diners on a Flavor-Loaded Trip Across China

Share All sharing options for: At Atlas Kitchen, a Risk-Taking Chef Takes Diners on a Flavor-Loaded Trip Across China

In the final decades of the 20th century, the Upper West Side became a hotbed of Sichuan cuisine. Chains like Empire Szechuan concentrated there, and one of our earliest Sichuan chefs, Wei Kai Chang, established himself at a restaurant simply called Szechuan. So it’s not too much of a stretch that this neighborhood flourishes again as a bastion of regional Chinese cooking. Part of the reason is the proximity of Columbia University, where Asia-born students and faculty crave restaurants that provide a better taste of back home.

The latest newcomer, Atlas Kitchen — whose website boasts “located next to Columbia University” — indeed excels at not just one regional style of Chinese cooking, but several. Pack your bags, because we’re going on a culinary tour of China.

Chef Kaiyuan Li is a Hunan native and a 20-year veteran of the New York dining scene, previously working at Hunan Manor. Dishes from that province — where sour and spicy flavors and dried, smoked, and pickled ingredients are prized — have a major presence on the menu. Sichuan food is also a frequent menu inspiration at Atlas Kitchen, with some dishes miraculously transformed.

That old chestnut Chongqing chicken — you know, the ubiquitous heap of dried red chiles and bony chicken morsels — is here improved with garlic slices, extra oil, a crispness to the chicken tidbits, and tiny twists of dough called ma hwa, which are being seen in northern Chinese restaurants in Flushing. And Cantonese, Shanghainese, and Chinese-American food also appears. But Li does not always stick to tradition here, often innovating on classics of the genre.

Situated near the corner of 109th Street and Broadway, the restaurant has a boxy modern premises, with murals wrapping around two walls created by famed artist Qiu Anxiong, who was born in Chengdu. The mural is a continuation of his video animation series “New Classics of Mountains and Seas,” which depicts stylized skyscrapers and pagodas poking through the clouds as birds symbolizing airplanes waft by. The art creates a calmness in the restaurant, which mounts a menu that flies to the four corners of China for its inspiration.

Many say that Hunan food is hotter than Sichuan, but that’s not the case at Atlas Kitchen, though many dishes are righteously spicy. The red chiles printed in the margins of the menu are a relatively good indicator.

Front and center is one of the cuisine’s preeminent offerings, a humongous steamed fish head ($30.95) finished with red-hot oil, heaped with scallions and chopped chiles. The specimen is a buffalo carp, and more of the collar than usual is generously included, so diners don’t have to poke at the eyes and pull swatches of skin away from the cheeks to reveal some of the sweetest reservoirs of flesh. Every morsel is delicious, and if your table is like mine, all that will be left is a heap of bones.

But the best Hunanese dish on the menu may be braised chicken wings, feet, and gizzards in vinegar sauce ($24.95), which rates two chiles on a menu that doesn’t confer three. It arrives in a wash of tart yellowish broth made of preserved green pepper, with, on the occasion I tried it, a chicken talon sticking out of the broth and pointing accusatorially. The chicken parts are accompanied by various vegetables. What a lovely sight! Other don’t-miss Hunan dishes include beef jerky, dry as driftwood yet spectacular in its addictive properties, and spicy dried tofu ($10.95), a pepper-flecked barrage of compressed tofu triangles that achieve the texture of Twizzlers, served room temp.

Some of the options are Li’s own creations, such as a plate of miniature tomatoes and blueberries dotted with dried sour plums, whose sharp, salty flavor provides a contrast to the fresher, sweeter components. His dish called beef flank in dry wok — cooked using a German stewing technique, based on his experience in that country — is anything but dry. The small cubes of meat are braised in a pepper broth, then tiny fried wontons filled with beef are tossed in at the last moment as a bonus. One invention that doesn’t work is braised fish with perilla ($28.95). The leaves, which belong to the same family as Japanese shiso, have been cooked to flavorlessness without adding much to the fish.

On the Sichuan side of the menu, successes include pig trotters with the meat removed from the bone and finely diced, then stir-fried with fresh green chiles. Their wonderful gluey quality remains. Among dishes from Shanghai and vicinity is “minced beef with cilantro and egg white soup,” which represents the restaurant’s take on West Lake beef soup. The Shanghai soup dumplings are good here, too, thin-skinned and bulging with broth, though smaller than average ($10.95 with crab, $8.95 without).

One of my favorite things on the menu is a fancified version of a classic Chinese egg custard: Steamed eggs with seafood ($15.95) treats a soft omelet as a seabed below an ocean of reddish, soy-based sauce in which sea creatures lurk, including squid, shrimp, white fish, and fake-crab surimi. Eat it by scooping up egg, sauce, and sea denizen from the bottom with the big spoon, then plop it on your plate on a hillock of rice.

On the other hand, you might want to avoid ordering rice entirely, since the menu includes two great forms of fried rice. The one called yan chow is a zippy take on a southern Chinese classic, rife with eggs and Spam. A Hunan fried rice is also available, shot with long beans, char siu, and fresh red bird chiles. One of the most intriguing regional dishes comes from Dongbei in the far northeast, where sweet and sour was supposedly invented. Fried pork in scoop ($16.95) is a ball of pork fried with a very thick and unabashedly sweet crust. While perhaps reviling its sweetness, you’ll adore every bite.

Atlas Kitchen heralds a new type of Chinese restaurant in the city, one with a seasoned chef willing to take risks, while selecting favorite dishes from all over China. Heck, there’s even a page called American Style, which includes such classics as beef with broccoli and kung pao chicken. It serves to restore Chinese-American food to its rightful honored place among Chinese cuisines.

Our review of 山海 Atlas Kitchen 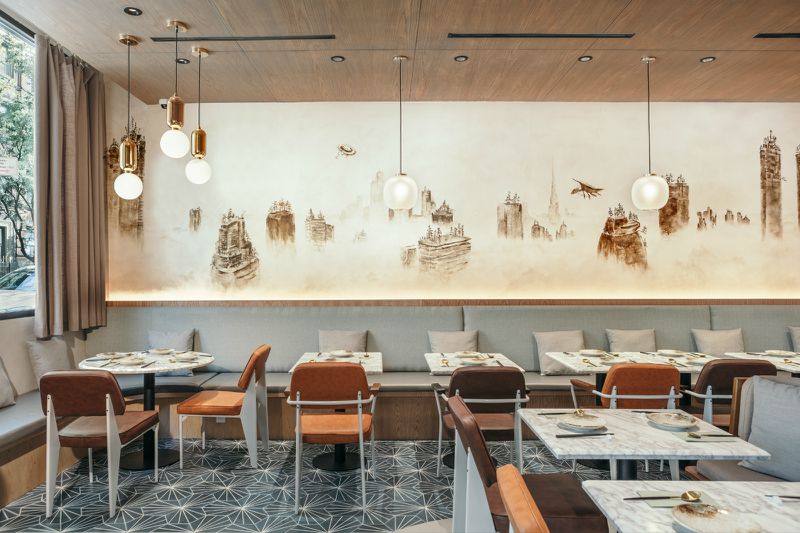 Cost: Dinner for two, including one appetizer, two main dishes, fried rice, a shared dessert, and pot of tea, including tax but not tip, $95.

What to Drink: This place is not fooling around when it comes to tea, and distinguished tea is not cheap. Small pots of tea served in ornate pots average $10, but in the Chinese tradition, water is added continuously to the pot, so the tea becomes weaker as the meal progresses.

Bonus Tip: Put together as large a table of diners as you can, because choosing among the many beguiling dishes will be less difficult. In addition, large parties are allowed to sit in the raised rear room, which provides views of the entire restaurant.