Just before noon on a recent Monday in FiDi, a gray Toyota Sienna stopped at Liberty Street near the World Trade Center. It had no discernible branding, but within 10 minutes, something happened: A huge line of people in shirts and ties descended on the minivan. The driver, unsurprised to see them, then started to hand them lunch, options like spicy mini hot pots, braised hand-pulled noodles, and handmade dumplings — all Chinese food that can’t be found anywhere in the neighborhood.

It might seem baffling, but for Chinese workers in Midtown and the Financial District, it’s an open secret: Finding decent Chinese food for lunch simply means finding the right minivan. 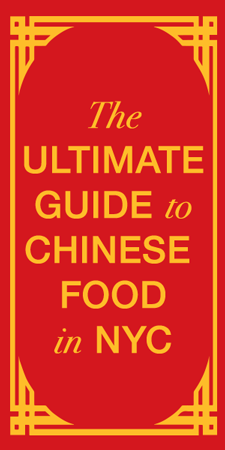 This is the work of Yun Ban Bao (aka YBB), a platform built into social media network WeChat that allows Manhattan office workers to place bulk orders from faraway Chinese restaurants. None of the food these restaurants offer can be easily found in the Financial District or Midtown, let alone with a $10 price tag for a lunch set. The lines to unmarked vans now happen regularly. Shortly after drivers park, they take pictures of their surroundings and post them to WeChat, signaling people to come pick up their brown bags.

The app works a little like a Seamless or UberEats with a wider delivery zone: Restaurants in Flushing, Chinatown, and the East Village sign up for long-distance deliveries, while users in well-heeled commercial areas place their orders in bulk on WeChat. The company now has dozens of popular pick-up spots throughout Midtown, FiDi, and New Jersey.

Unlike better-known tech giants like GrubHub, YBB thrives by catering to one very specific consumer need: Chinese comfort foods — or jia chang cai (everyday food) in Mandarin — for Chinese workers. In the four years since its launch, YBB has attracted more than 50,000 active monthly users in New York, New Jersey, Connecticut, and Pennsylvania, most of whom are Chinese.

“I finished the bowl in the middle of the cafeteria surrounded by salad-eating colleagues. The spice made my face all red and brought me tears,” Zheng says. “That felt awesome.”

The Manhattan office worker lunch market has been flooded with fast-casual restaurants like Sweetgreen and Pret A Manger, but for the increasing Chinese population in New York’s workforce, it’s not always as satisfying as the hot foods from their hometowns.

The vast majority of Chinese restaurants in the New York area fill their menus with a mixture of pricey entrees or dishes that are adapted for a Western palate. Though Chinese regional cooking is increasingly common throughout Manhattan, only Chinese-populated neighborhoods like Flushing have enough local foot traffic to allow restaurants to go all in on regional, homestyle cooking that’s also inexpensive enough to buy for lunch. For Chinese people who do not live or work in those areas, it’s this everyday food that’s become the more luxurious commodity.

“There are few dining choices for me,” says Yin Zhang, an advertising manager working at the World Trade Center. “At lunch time, my stomach is chun chun yu dong (like a squirming monster) for Chinese food.”

Such enduring desire for everyday Chinese food has existed for decades, but two recent factors have finally made services like YBB possible: increasing regional diversity in Chinese food and the prevalence of WeChat.

As one of the fastest-growing Chinatowns in the world, Flushing attracts a diverse crowd from China, well beyond the Cantonese and Fujianese communities that historically populated the city. Housing some 60,000 residents, nearly 70 percent of them Asian, the neighborhood is now a haven for all kinds of Chinese comfort foods: rice noodle soup from Yunnan, jianbing (a savory, crepe-like street food) from Tianjin, malatang (mini spicy hot pot) from Chongqing, and many other regional cuisines. The proliferation of such restaurants gives services like YBB ample options to choose from.

At the same time, messaging app WeChat has become a one-stop dining solution among Chinese immigrants. Users can simultaneously browse news of the latest popular restaurant, socialize with nearby Chinese people who share similar tastes, and directly place orders. Even before the birth of YBB, it was common for Chinese people to organize location-based WeChat groups, which function like chat rooms where people can exchange dining tips.

YBB’s founder Paul Lang was a member of these local food-hunting groups. The Basking Ridge, New Jersey, resident was impressed by the determination of his local Chinese community: People had such a profound craving for good Chinese cuisines that they’d make day trips to Flushing on weekends, though it’s nearly 60 miles away.

“WeChat has naturally grouped these people together, and they already share a common interest in Chinese food,” Lang says. “The next step is to commercialize it.”

In 2014, Lang and his business partner launched the WeChat long-distance bulk delivery app, starting as a business that delivers food from Flushing to suburban New Jersey. Then, after years of attempting to ship food to as far as North Carolina, YBB eventually decided to focus on a niche but loyal audience of Chinese people working in the tristate area.

For active WeChat users, pre-ordering food through YBB is a straightforward process. YBB presents a curated delivery schedule on its WeChat account, and users can easily filter the date and location, and then pre-order the dishes on WeChat. Depending on the foot traffic, each delivery spot has about one to three partner restaurants every day. In addition, YBB adjusts the schedule each week, so people near the delivery spots can have diverse choices. Users then pay either with cash, through credit cards on WeChat, or with YBB credit, an internal finance system.

Patrons lining up and paying for YBB delivery

Most of the food is available for between $10 and $20, portioned for solo diners and with diverse offerings. On one day in early February, workers near 111 Wall St. got options from Midtown’s HK Kitchen and Kung Fu Kitchen. The former presented some 40 menu items to choose from while the latter had about 20. On the same day, customers near the Columbia Medical Center, where many Chinese students work and live, received food from Tang Gong Zhu, a Flushing-based spicy hot pot place.

It’s a boon for lovers of homey Chinese food in Midtown and FiDi, but it’s also been widely welcomed by restaurants. The new, captive audience means far more sales for the restaurants. Erbo Sun, the owner of Tang Gong Zhu, says that his restaurant does four to five YBB orders a week, with 60 to 70 orders on average per day. Since partnering with YBB to deliver beyond Flushing a year ago, the number of delivery orders has tripled.

And the fee is lower than the 30 percent that UberEats takes. YBB requires between 5 and 20 percent of sales, depending on whether the restaurant manages its own delivery or if it’s using a YBB-supplied van and driver.

Not every restaurant is lucky enough to be a YBB partner. The platform hopes to maintain a varied lineup with high-quality cuisines, and there is a long waitlist.

Restaurateur Jenny Long waited a year to get her Flushing jianbing restaurant, Express Tea Shop, on YBB since there were already other places serving the savory pancake on the app’s roster. She finally got on about four months ago. Other restaurants even change their menu in order to shorten their wait time. East Village Yunnan noodle shop Shi Miaodao waited four months — owner Qing Xiao added “healthy food” items, which tend to have less competition on the platform, to prevent an even longer delay.

Though it can be a significant wait, YBB’s smaller but curated list helps with restaurants’ visibility, restaurateurs say. It prevents Shi Miaodao from being buried among many other Yunnan noodle shops, and it prevents price wars between similar restaurants, Xiao says.

To YBB, the list needs to stay curated to uphold the reputation of the food and service behind the platform, Lang says. He chooses partner restaurants based on the food quality and the brand, but also based on whether or not it actually has the capacity to take bulk orders. The business model requires restaurants to prepare a large amount of orders with a short notice, and not every restaurant is ready for such an operation.

“If the customers can’t get their food because of some silly mistakes, there’s no point for YBB to exist,” Lang says.

For non-Chinese people, it ends up sounding almost like an urban legend: mysterious vans bringing interesting foods to Chinese bankers in commercial areas daily. During lunch delivery, it is not uncommon for people to stop by and ask YBB staff where they can get the food themselves. Some YBB users end up fielding requests for deliveries from colleagues.

“It’s too hard for them,” says Xiao, who used to place YBB orders for his coworkers while working at Credit Suisse, “because they need to download WeChat and learn Chinese.”

But YBB is trying to expand its audience, though the process is slow so far. The company now breaks even but does not yet profit from its long-distance deliveries, and the next step, according to Lang, is to expand its scope of service in the greater New York area, with more flexible delivery time, bigger dining selections, and catering to different audiences.

Instead of adopting Western middle-class lifestyles like their predecessors, new Chinese immigrants are actively seeking ways to recreate their roots in America.

Last year, it also launched English app YBB.plus on iOS and Android devices, hoping to reach more non-Chinese users. The English version doesn’t have many downloads or reviews yet, and instead of WeChat, the users get notified via text messages when the food delivery vans arrive. Restaurants are still being trained on using this different system.

All of these companies, even while their business models vary, thrive because of one shared premise: Instead of adopting Western middle-class lifestyles like their predecessors, new Chinese immigrants are actively seeking ways to recreate their roots in America.

To Lang, YBB’s biggest success is that it improves the quality of life among Chinese workers in the U.S. “I don’t know if it’s the same for people from other places,” he says, “but for us Chinese, if we eat well, everything is better.”

When he’s not planning his next meal, Tony Lin makes videos and writes about food and the world around him.