Spa 88 heals the body from outside and within, delivering some of the city’s most satisfying borscht and pelmeni

Share All sharing options for: Wall Street’s Underground Russian Spa Is a Dining Destination for the Soul

My first piece of advice about the Russian banya, or bathhouse, is that the cold dip pool is for cooling off. It is not for swimming. That’s a lesson I learned as a 16-year-old doing laps at a tiny pool in St. Petersburg. The water was 38 degrees. I was pretty stupid.

My second piece of advice about the banya, a Slavic sweat-bathing tradition for over 1,000 years, is that you will eat well there. This is particularly true at Spa 88 in FiDi, a two decade-old sanitarium where people in bathing suits feast on some of the city’s finest former Soviet Union fare. I’ve been schvitzing here for the better part of a decade, a love affair that began because another one ended. Briefly: She moved out of my place and into his. And the banya is where I went to recover. It was a place to numb my pain without alcohol, to take an impromptu nap without explanation (try that in a bar), and to have an emotional meltdown without interrupting dinner.

The banya is where I went to heal.

A patron leaving the schvitz; Georgian-style chicken tabaka; another patron preparing for a platza treatment; tea with borscht

Eating under these conditions isn’t quite like visiting a steakhouse or brasserie. The heat, followed by icy plunges, exhausts the body in a profound way. It induces hunger. Feeling the life come back to your almost-numb (or profusely sweating) extremities as you slurp up ukha — clear fish soup with a potent taste of the sea — is a very different sensation than feeling your stomach distend after ingesting yet another slice of ribeye.

This is where the banya differs from its American analogues, those piney, wood-paneled rooms at Equinox where suburbanites unwind after watching Dr. Oz for an hour on the elliptical. A fitness-club sauna is blandly calming. A Russian sauna is stressful. And while the ultimate result is that you will, at some point during your multi-hour session, become wonderfully relaxed, the process of getting there is a rigorous mental and metabolic affair.

Spa 88’s narrow entrance, located next to a pawn shop on Fulton, belies the expansiveness of this subterranean behemoth. It packs a lap pool, a cigar room, a jacuzzi that’s hogged by non-Russian speakers, a juice bar that hawks dried fish, massage rooms, cold rooms, a restaurant, a cafe, and four hot rooms, each of which tax the body with very specific degrees of heat and pain.

The infrared sauna (lolz: “bulletproof your immune system”) is the most useless of the three. Better to start off with the Turkish bath, foggy with crisp eucalyptus steam, before moving on to the old American schvitz, where people dump buckets of water over themselves to prolong the pain. Then graduate to the dry Russian sauna. Here, the temperature is so hot (180 F or higher), it can start to melt a plastic container, releasing its toxins. If you bring in a water bottle, you will be admonished.

Some patrons slather their faces in honey, which Russians historically believe is a natural detoxifier and skin softener. Others might hire a man with military-grade forearms to whip them with wet oak branches, resulting in the leaves releasing “organic phytoncides, infection inhibitors, decreasing the growth and development of pathogens in the body,” per the banya. This treatment, known as platza, perfumes the surrounding benches with the scent of a damp forest.

On a Saturday afternoon, you sit closer to people than you would at a communal table. Except here, people don’t have shirts on. Here, you sweat. Your perspiration starts off as a damp treadmill dew, salutary evaporation to keep your exterior cool. But as the minutes pass, your sweat becomes more viscous, mixing with the skin-softening secretions of your sebaceous glands. It’s as if a light film of olive oil is slicking your entire body.

Then you jump into the cold plunge. You scream. You warm up in the sauna again. You repeat this process so many times that your nerve endings start to tingle and go numb; it is the epidermal analogue to Sichuan-style mala. And then you eat. The sweet musk of kharcho — a spicy Georgian lamb soup — is detectable from across the table. The broth is the color of gravy. Rice adds starchiness; whole peppercorns add fire. It is hearty without being rich, seasoned without being salty. It lets patrons return to the hot room without burdening the digestive system or blurring the senses. So you go back in and sweat.

From top left: The cafe at Spa 88; showering after the hot room; heading back into the sauna.

The banya serves as a respite from the traditional restaurant dining experience, an enjoyable if restrictive construct where patrons are shunted to a bar until the party is complete, directed to a table for dining, presented a check upon request, and then expected to leave with haste.

At the spa, your companions do not need to arrive at the same time as you do, a convenience that holds true at literally any bathhouse, from the century-old East Village one, to the sprawling banya in Seagate, to the Korean Spa Castle in Queens. Patrons aren’t pinned to their chairs, either; you can wander around without eight staffers asking whether you need help. And you can stay so long that it’s not unreasonable to have two separate meals during one visit.

The banya is the antithesis to the safe two-drink date. It is showing up at Balthazar for lunch and leaving after dinner.

Much of the same could be said of food halls and venues like Starbucks Reserve Roastery, which function as stay-as-long-as-you-want coworking spaces while hawking expensive pour-over coffee and artisanal pastries. But still, the banya is different from those all-day venues in that the gastronomy is even further removed from the equation.

This is why dining at the bathhouse recalls dining at baseball games, football games, bowling alleys, municipal pools, arcades, mess halls on ski slopes, or this really weird alligator zoo in Florida where they fed me fried gator. The banya reminds me of how I used to eat before I ate for a living, which is to say at places where food was a vital part of a larger activity, not the single religious event around which an entire evening was organized.

The banya is a place for a more heterogeneous group of body types than a boutique spin class. It’s a place where, if the finance bros get too loud, you simply throw water on the hot rocks and watch them flee to the upstairs whirlpool bath.

The goal of the spa isn’t culinary enlightenment or showing off one’s abs in expensive athleisure. You come to the banya for cleansing, restoring, meditating, and socializing in cheap used swim trunks, which are provided free of charge.

My last piece of advice about the banya is to consider the central events in The Irony of Fate, a Soviet screwball comedy from 1975. On New Year’s Eve, a group of friends get so drunk at a Moscow bathhouse that they send the wrong guy on a flight back to Leningrad. The poor chap doesn’t realize his predicament until he wakes up 450 miles away from home, in the bed of a woman no less. A love story ensues and there’s biting commentary on drab Soviet architecture — dude couldn’t tell which city he was in — but really, the point here is that if you drink at the banya, be careful!

So while the infused vodkas might be tempting, I’d say a single beer is about the upward limit of alcohol consumption. If the goal of the spa is to beneficially dehydrate, the goal of the cafeteria is to put fluids back in.

This applies to solid nourishment as well. Keep things simple, and always order borscht, a soup that’s cloudy and dense with cabbage but with enough tartness to counter the restrained sugars of the beetroot. Also consider the khash, Armenian beef foot and tripe soup, with a float of scallions and pepperoncini. Your lips will stick together from the gelatins.

The name of the formal upstairs restaurant, which also services the lower-level banya cafeteria, is Matryoshka, the term for the famous Russian dolls within a doll that decorate the room. For better results, dine in the cafeteria. You seat yourself on a plastic nautical high-back chair — like the ones they rent on European beaches — and you eat food off a backyard-style glass table.

You place an order at the counter, take a few runs into the hot rooms — no need to wait at your table like at a traditional restaurant — and in about 10 to 15 minutes, your meal is ready. Perhaps you’ll ask for sweet blini with salty salmon roe; the maritime musk of the red caviar awakens the senses. Feeling just a touch more peckish? Then order pelmeni, Siberian pork dumplings doused in sour cream, or Georgian chicken tabaka, poussin that’s been crisped under a brick till crisp and juicy and slathered with garlic.

Then you take a nap, possibly on a soft couch, but more likely at your table. Ten minutes later, you wake up. You take a swing of Poland Spring water. You realize that maybe this water isn’t yours. You drink some more anyway, and you stride back into the sauna, a little more relaxed, and a little more fortified to face the never-ending cold dip pool that is a New York winter. 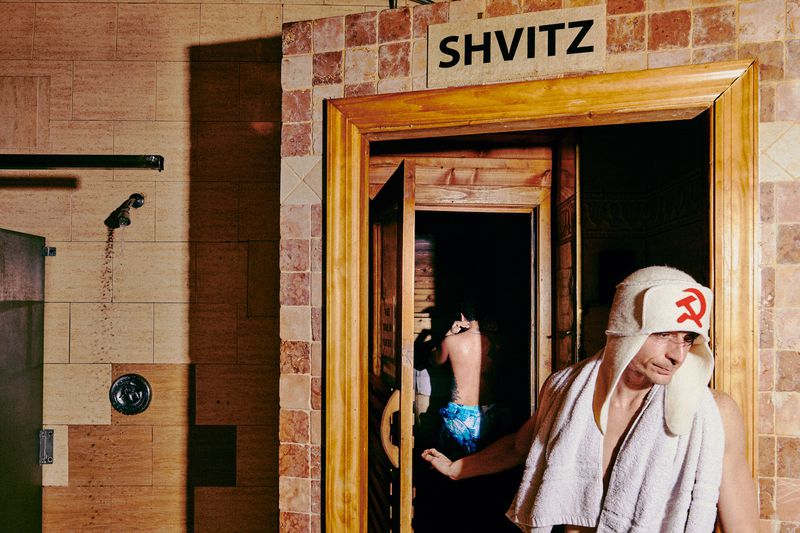 Cost: $50 full-day admission for the bathhouse, though there’s no fee for guests only visiting Matryoshka restaurant. Platza is an extra $40. Service is not included.

Bonus tip: Leave about three hours or more for a proper visit, or longer if you plan on napping. But pace yourself. Go easy on the hot Russian sauna and cold dip pool, especially if you’re a first timer. Consider wearing a wool hat ($20 at the gift shop) to protect your head from the heat. Also, don’t be a creep!

Critic’s note: This column is presented without stars because food is only one part of the larger bathhouse experience.

Is Anyone Surprised Grubhub’s ‘Free’ Lunch Program Was a Disaster for Restaurant Workers?

Manhattan’s Latest Speakeasy Is Hidden Behind a Provisions Shop