My general advice for caviar coincides with my maxim for top-shelf Champagne: Don’t order either at restaurants. The only thing a culinary establishment really does to a bottle of Dom Perignon or a tin of osetra is mark it up and pop it open with a soft kiss that sounds like this: cha-ching. To truly justify a proper fish roe program, a restaurant needs to do more than resell the ubiquitous luxury from a nearby boutique. It needs to go beyond single glasses of bubbly that cost more than two bowls of ramen. A sevruga-slinging spot, in short, should be more like Air’s by Ariel Arce or the Riddler by Jen Pelka, two Village wine bars that make caviar and Champagne a touch more accessible — if not quite cheap.

There’s something particularly fancy about dropping by Air’s, located in a bustling MacDougal Street townhouse. Green palm fronds rise up from the marble bar. Red neon tubes, shaped like lips biting a cork, glow above the soft banquettes. Teal lights shine behind cases of wine. And diners like me sit comfortably on velvet counter stools, sipping gold-hued wine out of flutes and nibbling on inky fish eggs. Caviar, the essence of the sea encapsulated into tiny pearls, often goes for at least $90. But here, a full ounce of kaluga runs $70. Baerri, a bit more elegant, costs just $55 for half an ounce; it shimmers in the candlelight, betraying a faintly emerald hue. The beads burst with a gentle pop and deposit luscious fish oil on the tongue to recall a slice of fatty tuna belly.

And just as cookies call for milk, caviar necessitates sparkling wine to gently scrub the palate of all the oceanic salts. Air’s can help in this regard, offering six Champagne pours at 20 bucks or less. At the Riddler too, waiters match fairly priced kaluga with hard-to-find bubbly, none of it pricier than $28 by the glass. True, these snacks will end up costing more than a dry-aged strip with fries, but it’s still a bargain way to feel luxe during an evening out.

As the new decade approaches, Manhattan feels more and more like a museum gift shop of basic-level fanciness: money, finance bros, Tetris-like skyscrapers on Billionaires’ Row, wagyu-laden steakhouses, and bluefin-hawking sushi dens. That’s why it’s surprising that the wine world is that rare sphere of the city that’s trending more idiosyncratic and affordable-ish. Mid-range restaurants are increasingly turning their attention to quirkier skin-contact whites, pét-nat sparklers, and other natural wines, many of them exhibiting fun, funky, and unexpected flavor profiles.

Air’s and the Riddler rank among those venues — sort of. The interventionist methods used to produce Champagne, particularly the addition of yeast and sugar, don’t quite fit into the definition of “natural.” But the namesake region is experiencing its own promising changes, from the rise in biodynamic farming to the exploding popularity of grower-producers: modest houses whose wines are more personal and terroir-driven than the ultra-expensive gift-boxed bottles sold at duty free shops.

Arce and Pelka are far from the only operators showing off grower Champagnes or other progressive wines. What makes these hospitality gurus more unusual rather, is how heavily they lean on those selections by the glass, while relegating obvious indulgences like Krug and Billecart-Salmon to spendier bottle selections.

Despite their commonalities, these are two very different venues: The Riddler, which debuted in San Francisco, hawks airy Zalto stems on its website, while Air’s sells discount caviar on its site. Composed small plates and a buttery halibut dish that wouldn’t feel out of place at Le Bernardin make up the bulk of the Riddler’s food menu, but Air’s is more bare-bones, with mostly ready-to-eat dishes like raw oysters and charcuterie. One of them is très bougie. The other one is less bougie. Both are quite good.

Shortly after opening, Air’s cut its prices to 100 percent markup over retail, versus the more standard 200 to 300 percent. That translates to 50 or so bottles under $100. “Our goal is to expose as much Champagne as possible to as many people as possible,” Arce, a Hell’s Kitchen native, told Eater a few years back. Accordingly, a Jacques Lassaigne biodynamic blanc de blancs (made from only “Queen Bae Beyonce Chardonnay,” per Air’s), once $110 on the original menu, is now $85.

Like Terroir in Tribeca, the list offers an oenophilic education. It explains the role of chalky soil in the wine’s minerality, and argues that blended non-vintage bubbly is ideal for caviar, while rosé is better for charcuterie. Air’s is correct here: The faint sweetness in the rose Champagne counteracts the saltiness of spicy sopressata. And whatever crisp blanc de blanc they’re pouring by the glass — perhaps a J.L. Vergnon Murmure — will go nicely with the plump king crab; that wine’s acidity is powerful enough to cut the miso-brown butter with which it’s matched.

Shortly before a caviar sandwich ($20) appeared one night, my waiter poured an all pinot meunier selection and smiled. The pairing was brilliant; the lemon juice-like tang of the bubbly softened the mussel-like musk of the fish eggs. The eggs, a touch less firm than the kaluga and perhaps a whisper less complex, belonged to a breed of bowfin roe from Southern U.S. waters. The delicate coral beads, pretty enough to wear on a necklace, are available on their own for just $40 an ounce.

Clockwise, from top, all from the Riddler: A shellfish platter with shrimp and hamachi; white truffle risotto with Parmesan; and the dining room during service

“We want to be a neighborhood spot that people can come to a couple times a week. That’s why we’re doing a burger,” Riddler’s founder and owner Jen Pelka told Eater NY this year, adding: “But we also want it to be a place that people can really come to celebrate.” It’s possible, of course, that Pelka has a Silicon Valley-tinged understanding of community or celebration. My first meal here — one appetizer, two glasses of Champagne, and that burger — ran $128 after tax and tip.

Here’s how the bottle list greets patrons: “Ask a sommelier for a 100 Club Scorecard to track all of the bottles of Champagne you try,” the document reads. “Those who purchase 100 different bottles will be awarded with a Riddler bomber jacket with your name embroidered in gold.” That proposition seems reasonable enough given that literally every brand, from Starbucks to Sweetgreen, has a rewards program.

But since there’s just a single bottle of Champagne under $100 — with a tighter selection of half bottles and pét-nats, which also count — it’s worth mentioning that a patron will spend roughly $17,000 to join the so-called club. That all sounds about right for a dining room with a gold-leaf ceiling.

The Riddler, by any yardstick, is expensive. Then again, the haute-sparkling-wine stratosphere operates by its own ridiculous value equations. At any ambitious American or Gallic restaurant, it’s unusual to encounter more than a single glass or two of Champagne for less than $30, so the fact that Pelka often offers seven under that bar makes it a welcome outlier. Among those fizzy wines is a Gonet-Medeville ($28), a brilliantly bracing non-vintage blend that’s almost as lean as grapefruit LaCroix.

With beverages like this, chef Nikole Morsink could have gotten away with more tavern-like offerings, like the $21 burger, which is cheaper than all but a single Champagne. It’s a fine, forgettable brisket blend with a layer of raclette that packs just enough funk to let you know it’s there. But Morsink, formerly at the Modern, seems to have something more ambitious in mind; the chef has a preternatural knack for either tweaking run-of-the-mill preparations or luxuriously exalting simple dishes.

Take the king crab. So many restaurants fall back on serving the regal crustacean as is, in its own shell. Morsink tries something a bit more elegant: stripping the meat from its shell, poaching it in tarragon butter, and tossing the warm flesh with toasted almonds. The result is a crab with a bit more oceanic oomph than its cooler counterparts; the butter and almonds impart an intoxicating nuttiness.

Shrimp cocktail gets a salt-and-pepper treatment, leading to a pile of barely-cooked-through shellfish with a sharp, saline punch. Roasted halibut turns out more typically, but masterfully, French. Morsink anoints the white filet with a crown of chanterelles and a garnish of green shiso, then sets it over a foamy moat of mushroom broth. Think of the fish as an edible sponge for all the surrounding earthiness — not to mention a fatty foil for a glass of Noel Bazin brut rose ($25).

White truffle risotto, at $42, will count for some as an unaffordable extravagance. But in this realm of luxury dining, it’s a heck of a deal when versions of the dish can command $135 or more. Each creamy grain snaps with an al dente bite, a whiff of brown butter, a punch of Parmesan, and the ephemeral pungency of pricey fungi.

Caviar is reliable and not too spendy. The large-beaded kaluga variety ($78) sports a soft texture and mild seafaring flavor; discard the chips and creme fraiche, which overwhelm the delicate eggs. Better is the faux dessert roe. Pot de creme arrives in a round tin, affirming the venue’s nouveau-patrician leanings. Crunchy chocolate balls and bitter caramel sit over a layer of salted and sour vanilla creme fraiche.

The Riddler is far from the first restaurant to serve pretend caviar, but it might rank among the most adept; the mix of crunch, saline punch, and astringent sugar makes the frequently leaden dessert feel light, complex, and whimsical. It costs just $11, which suggests bespoke desserts are undervalued with regard to widely available wines. No matter. It’s a modest price to pay to spend another 10 minutes or so on a chic corner of the West Village, with giant windows overlooking a leaf-strewn Bank Street.

Our review of Air's Champagne Parlor 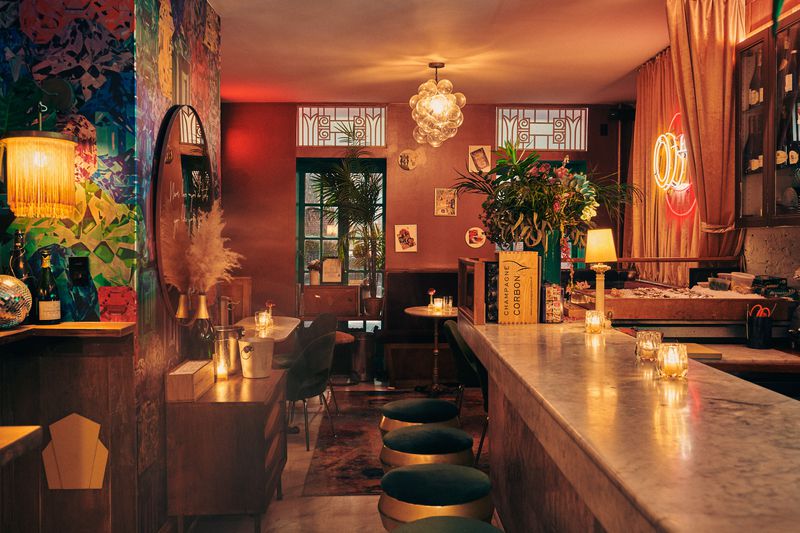 Cost: Champagnes by the glass at $20 or under, with at least 50 bottles under $100. Caviar is priced by the half ounce and starts at $25 for Grinnell, going up to $55 for Siberian.

Bonus tip: Service can be a bit scattered in the dining room during prime time. The best seats, accordingly, are at the bar, which is conveniently located away from the drafty doorway.

Our review of The Riddler 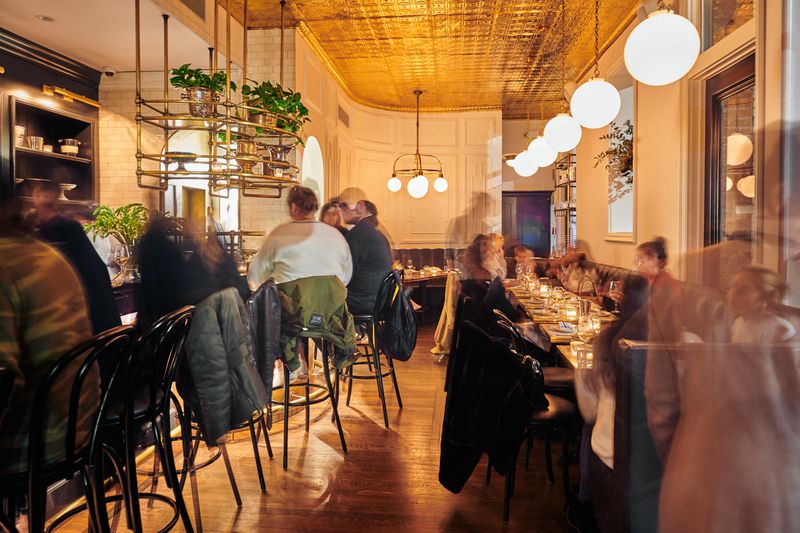 Bonus tip: Riddler can get quite busy during prime time; those seeking a table should book ahead via Resy.