Review and information for Le Bernardin

Salmon, in its common New York form, is decidedly unluxurious. Diners more frequently encounter it as a salad protein than as an haute menu item. New York magazine’s Adam Platt once quoted a companion calling it the “Cheerios of restaurant food,” before adding that it was “predictable” and “useless” to critics. In fact, the last time Pete Wells positively used the word salmon in one of his rare four-star reviews was in 2012, when he wrote up Le Bernardin, Eric Ripert and Maguy Le Coze’s French seafood palace in the Theater District. It was a brief mention. I will be less brief.

To understand why Le Bernardin remains one of the city’s most thrilling and technically astute restaurants, a gem of a splurge that won’t drain the bank account as much as other fine dining institutions, do one thing: Get the salmon.

Order it raw with Moroccan seasonings. Neat rectangles of fish sit on the plate like pats of creamsicle-colored butter. They melt on the tongue, releasing warming, musky notes of argan oil and cumin.

Order it seared, with a Northern Indian spice blend. Slices of red-hued sea trout — part of the salmon family — nearly fall apart when prodded. They ooze fat, enrobing the mouth in a velvety slick. A dice of roasted tomatoes adds acidic relief, while coriander and garlic impart a sharp piquancy.

Order it in pot-au-feu. Chefs place the fish in a shallow pool of water and warm it for just a few minutes, barely firming up the meat. Tableside, a waiter surrounds it with a moat of veal and beef broth, then spoons black truffle butter over it. A whisper of well-done flesh acts as a counterpoint to the wobbly pink filet; its ample oils channel a mouthful of salmon roe. A dose of broth then brings a rush of meaty, earthy balance. Here, the majestic fish is as luxurious as wagyu.

It’s tempting to write “Le Bernardin has still got it,” but that’s what Michelin declares, without much context, every autumn when it awards yet another set of three stars to the restaurant. The more complex reality is that New York seafood has evolved in the 33 years since Maguy and her late brother, Gilbert, relocated their Parisian restaurant to New York. Namely, there’s a heck of a lot more competition now. Milos came along in 1997 with its jet set lavraki and yacht-friendly prices. Marea opened during the crash in 2009; it now sells caviar in the shadow of $100 million apartments. And in more recent years, the exorbitant sushi economy began its domination. Scores of tiny bars, many of them in hip downtown locales, cater to a moneyed clientele seeking (endangered) bluefin in all its fatty forms.

So really, how much culinary relevance can a Times Square-adjacent French spot flaunt as the new decade nears? A lot, as it turns out.

Le Bernardin could keep up with any posh omakase joint on its salmon alone. The menu focuses on sustainably minded catches with a breathtaking band of textures and flavors. Langoustines sport a mouthfeel that’s somewhere in between marrow and gelatin. Hiramasa, or amberjack, bleeds luscious oils. And poached skate boasts the soft, ropy mouthfeel of Cuban ropa vieja. Ripert and Eric Gestel, a longtime lieutenant who recently ascended to the position of executive chef, have not served bluefin for over a decade.

Another plus is that the menus — $165 for four courses, $198 for a tasting, $228 for a longer meal — are more accessible than those of the city’s most vaunted sushi spots. The beverage program has a generous feel to it as well. Wine director Aldo Sohm offers scores of glasses under $20, including a flinty skin contact grüner veltliner (sound the air raid alarms, there’s finally a natural wine at Le Bern), and a seven-pour pairing at just $95.

The room, updated in 2012, still shimmers. A tempestuous painting of the ocean, deep green and bigger than my studio apartment, still lines the back wall. Leather banquettes coddle patrons seemingly dressed for a black tie charity ball. Patrons who only follow the (absurd) rule of “jackets required” will nonetheless find themselves wondering whether they should’ve donned a tux. A team of largely female sommeliers, an outlier in this male-dominant field, glide across the room with airy zalto stems and silver tastevins — shallow cups used to check the color and clarity of wine.

Waiters rush to tables carrying pots of sauce. Lots of sauce; up to 30 different ones on any given day. They aren’t so much a performative flourish as they are the cornerstone of any dish, conveying endless layers of aroma, acid, meatiness, and creaminess. The result is a visual style that can veer closer to “rustic shallow soup” than “built for Instagram,” but none of that matters once you start eating. And slurping.

Any hot broth is the fine work of Vincent Robinson, a saucier who’s plied his craft for over thirty years here. Saucing is a famously fickle aspect of gastronomy — these fragile potions can collapse if you look at them the wrong way — and yet Robinson operates with the precision of a physicist working a particle collider.

Take that hiramasa again. It’s too rich by itself. Gestel, riffing on a light Japanese stew called nabe, adds tiny shrimp for sweetness and matsutake for a whiff of pine. Then, a pool of lemongrass dashi amps up the entire thing — accentuating the seafaring flavor while toning down the oil.

In a peekytoe crab dish, one must concentrate, almost pray, to sense the subtle coastal aromas. It needs help, just not a lot. So the kitchens adds a light shellfish sauce, with a hint of fragrant coconut curry that only seems to magically appear when you whisper the word fenugreek to yourself three times.

Ripert has long displayed a fascination with Asia, but over the past decade Le Bernardin has espoused a nautical globalism rivaled only by the more casual Saint Julivert. In 2019, that translates as sharp, salmon-y hat tips to India and North Africa. It also means a transatlantic take on the Spanish speaking world. The cooks sear octopus to a bouncy crunch — nothing unexpected there. Then the flavor station throws in a swatch of mole poblano, a few shoots of cilantro, and a pour of Spanish chorizo sauce. The flavor is sweet, grassy, and nutty at first, before giving way to a deep smokiness. Aldo then swings by with a half glass of Navazos Niepoort ($15), a non-fortified fino that cleanses the palate with a tongue-scrubbing yeastiness.

Decades before neighborhood brasseries were putting sea urchin on flatbread pizza, a young Le Bernardin offered it baked in the shell with its own juices. “It smacks of the sea,” Craig Claiborne wrote in 1986. Thirty years later, Le Bernardin continues to embrace strong flavors, sometimes dipping into levels of heat, oil, and funk uncommonly seen in even new tasting menu spots.

Take the geoduck, a staple at Cantonese seafood spots but rarely encountered at ritzy French hangouts. Le Bernardin slices the phallic shelled beast into paper-thin rounds. This past August, it arrived simply with a few slices of cucumber and jalapeño. The mollusk snapped with a scallop-like sweetness, before exuding a tang that recalled fresh clam washed in tidal foam. And then the chile kicked in, jolting the palate with a capsaicin kick that would be aggressive even by hot wing standards.

Toward the end of the meal, a server brings over the surf and turf of the century: a cube of wagyu and another of Hawaiian walu. The steak expresses a level of beefiness that recalls a Shake Shack burger, while the texture mimics that of silken tofu. The walu, improbably firmer than its bovine counterpart, packs luscious oils and grill char; it is as delicious and complex as a slab of more regal tuna belly.

If only the calamari had as much pep and zip. Stuffed squid with romesco shows didn’t rise above the level of a similar, cheaper dish at a tapas bar. Just the same: the caviar atop tuna carpaccio exhibits such a mild flavor one could eat it and not know it was caviar. That miss would likely feel tougher on the four-course menu, where it commands a $50 supplement. And while I’ve never had an a la carte dinner here that was anything less than outstanding, the laws of percentages dictate that the sting of a flop is felt more greatly over a shorter meal.

Keep in mind that Le Bernardin’s waiters can operate with a retro formality that doesn’t always keep pace with the modern food or uber-cool wine service. Staffers might apply the honorifics “monsieur” and “madame” with such frequency — more so than anywhere I’ve dined in the Francophone world — that you half expect a singing tea kettle and dancing candelabra to accompany the desserts.

Appropriately, those sweets are as playful as a cartoon.

Pastry chef Thomas Raquel, taking inspiration from the trompe l’oeil works of Albert Adria, will trick you into thinking there’s a real apple on your plate. There is not. Instead, Raquel surrounds a core of apple confit with brown butter mousse before hand painting and glazing the sphere to look like a tiny McIntosh. The feeling of cutting into fruit and finding cream is a dream that every child on earth should one day experience.

As for the mignardises, the chocolate dome tastes like a Junior Mint and the pate de fruit packs so much tart passionfruit one wouldn’t be faulted for mistaking this as a Sour Patch Kid. The lesson, of course, is that majestic dishes don’t have to be stereotypically fancy or mild to reach their apex. Sometimes, you can get by with salmon.

Our review of Le Bernardin 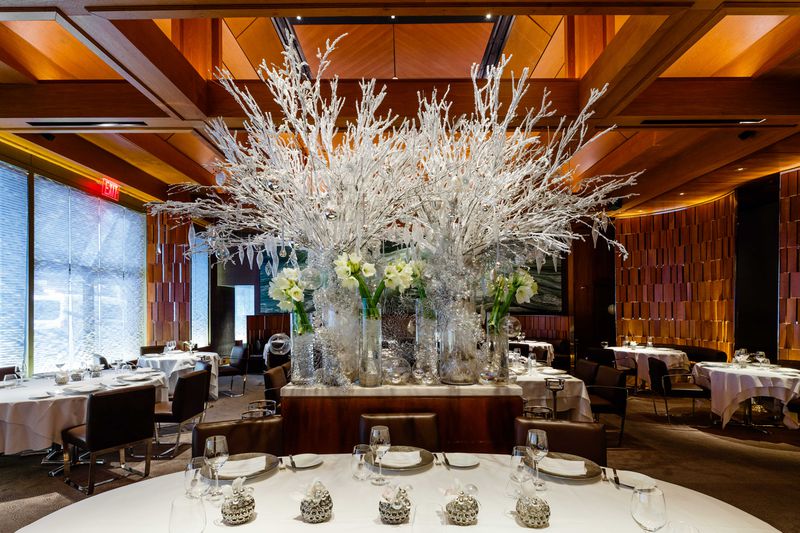 Bonus tip: Reservations can book up at least a month out, but the full dining room menus, including the tastings, are available to walk-ins at the bar and lounge.